Is it the Canvas or the Painter?

Where did it come from?

The poem is not what you think. This haiku was crafted by a computer algorithm, known as JanusNode, in 2001. The three-line poem implies the writer’s relationship to a body, one of complexities and nuances. As a reader, it’s easy to ascribe meaning to the philosophical question of the origins of a body. The power of this poem comes from its ability to pull the reader into a physical context, bringing human associations with it that are actually not founded in the text. For me, this opening poem raises a couple of questions: Is it possible to know when a poem is written by a computer instead of a human? Does it matter? The first question is technical, but the second is a question of value judgment, presenting its own complexities. 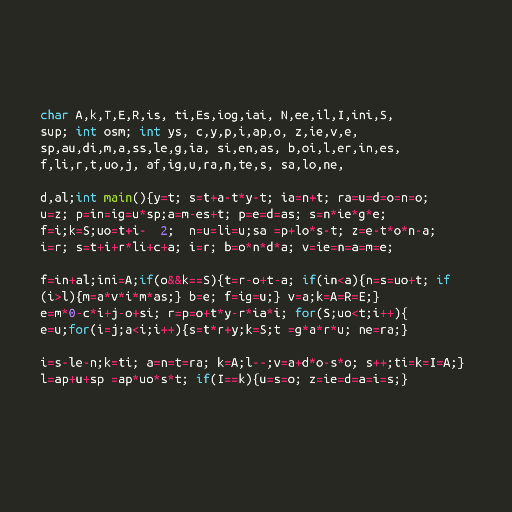 The literary elements of computer-generated poetry are twofold: the poem, and the code used to make the poem. Consider the poem as a piece: every time the algorithm is run, the output is a new piece. Each poetic algorithm is unique based on the programmer’s intent. Given the right set of inputs, the computer can figure out how to put together a string of words to make them look like something we might call a poem. Sometimes these poems, like the one above, can be genuinely interesting. One algorithm might choose its words based on parts of speech while another might compose a poem by counting a word’s characters. No matter the approach, algorithms used to create poetry depend on their source texts. So what can we then make of their results? Can a collection of words arranged by a computer be defined as poetry?

Perhaps poetry’s inherently human connotations set a standard for the computer to either match or surpass. Computers are definitely better at doing other things. But are they imaginative and critical enough to imitate a human? In the case of computer-generated poetry, we can expand this initial question to ask, can computers be poetic? Let’s say the success of a computer-generated poem is its ability to convince us a computer didn’t create it. Lucky for us, there’s a barometer for this, known as the Turing Test. Alan Turing lives on today as the extraordinary mind who gave us the beginnings of computer science. The test he devised evaluates a computer’s ability to behave as a human. The question guiding it was similar to ours: “Can computers think?” To answer this, Turing came up with a game, in which a judge asks a hidden man and woman a series of questions based on normative gender identities, like “how long is your hair?” The woman’s role is to get the judge to think she’s the man. Since Turing, the test has boiled down to simply a judge and a computer, where the judge guesses if a human or the computer generated the answers to their questions. If the judge is less than 50 percent confident that a human generated the answers, the computer is considered to be successful in imitating a human. At botpoet.com, you can play the judge in the Turing Test and guess if the poet’s author is a bot or not. But even with the help of the Turing Test, we’re still left wondering if it’s enough to know that a poem-generating algorithm can trick us into finding humanity in a machine. We just have computers trying to fool us. Anyone who has ever seen The Matrix should start thinking about getting ready for the apocalypse.

Regardless of the output’s ability to deceive us of its origins, the computer is inherently limited to and dependent on human participation in order to function. Gnoetry, another poetic program, produces outputs that are based entirely on the source code the human decides to enter. The more source code, the more the poetry is dependent on the human’s decisions.

In 2010, Zackary Scholl’s computer-generated poem passed the Turing test. It was later published in the Archive, one of Duke University’s literary magazines. Here’s the poem:

A home transformed by the lightning

this insatiable earth of a planet, Earth.

They attacked it with mechanical horns

because they love you, love, in fire and wind.

You say, what is the time waiting for in its spring?

I tell you it is waiting for your branch that flows,

because you are a sweet-smelling diamond architecture

that does not know why it grows.

Scholl was sly about his process. He waited four years before writing a blog post on the poem’s origin.

Zoom out. Scholl made an algorithm, and the output was considered to be a worthwhile poem, but he took the credit. So who’s the poet?

Scholl brings us to the second literary element of computer-generated poetry: the piece is the code itself and the human is the sole creator of the work. This perspective keeps us a bit more honest about the limitations of computers as poets. Scholl moves the focus away from the poem that the computer generated and emphasizes the process of generating that poem. Before, when referring to the piece, to the end product, the individual poem was uniquely essential. Now, with Scholl, the end product is an experience that is rooted in Turing’s fascination with deception. In other words, the piece is a performance and the poem is a mark of that performance.

The computer remains a tool in the artist’s creative process and the poem is the interface through which the piece is made accessible to the audience. A piece begins and ends with the human poet: they write the code, choose a series of source texts, run the algorithm, and finally they choose which lines to keep. These are the elements the poetic programmers get to play with as they build their algorithms. Think of each algorithm as a combination of linguistic rules, all of them. We’re talking limitations or specifications about the length of word, the type of letters in each word, or even punctuation (where it can and can’t be used). Beyond language, the programmer might also consider the length of each line. In JanusNode’s haiku, the coder had to define how many syllables could be in each line such that the computer searched for a sequence of words that matched these criteria. Maybe they even told the computer to make a string of words with exactly 17 syllables and then chopped them up into lines accordingly. It’s impossible to know without looking at the code, but these slight changes in programming are the human’s fingerprints on the piece.

Some people have even taken this view of code as poetry to an extreme. A publishing project, code {poems}, has created a space to publish poetry entirely written in code. In their words, “Code can speak literature, logic, maths. It contains different layers of abstraction and it links them to the physical world of processors and memory chips. All these resources can contribute in expanding the boundaries of contemporary poetry by using code as a new language.” There’s something very intriguing about this move to “code as a new language.” When it comes to life, the work wobbles across the line between technology and poetry. How, then, does the artistry manifest itself in various parts of the creative process? Does the language of the code allow us to enter a new realm of poetry?

Without getting into the chaos of cyberspace, there’s something interesting happening when a poem is crafted and curated entirely in the realm of machines. In some ways, what’s happening here is moving us back into the realm of the Language poets, but through the medium of the digital. In the 1970s, Language poetry emerged as a form of poetry that championed reader participation in finding meaning in the poem. These poets interrogated the limitations of language, seeking to neutralize the presence of a speaker.

One of the most beloved Language poets, Lyn Hejinian, discusses her relationship to language in the introduction to her 2001 collection of essays, Language of Inquiry. Hejinian recognizes that poetry “takes as its premise that language is a medium for experiencing experience.” What then becomes of this experience in the original text, in the form of code, is invisible to the reader?

This multi-layered nature of computer-generated poetry captures an interrogation of the computer itself. What’s at stake when we differentiate between the computer as the canvas or the painter? It might help to check out how other poets are actively integrating technology into their practice. Sophia Le Fraga, a Brooklyn-based artist and former poet-in-residence at Brown University’s Literary Arts department, often uses technology as a medium for her performances. In her piece Und3rground Lov3rs, Le Fraga brings to life a series of texts by two couples. The performance piece is a choreographed reading of the messages. It’s all about the human interaction that happens through tech. However, this work offers a different approach to the poet’s relationship to technology.

Through her language, Le Fraga invites her audience to find meaning in the social drama at play. In some ways, Le Fraga is bringing us a new type of Language poetry as the reader is asked to pull meaning from shorthand lines. Between her use of language and incorporation of technology, Le Fraga might act as the bridge between old and new media. The mode of instant messaging allows the piece to exist both inside and outside of cyberspace. This use of technology puts Le Fraga, and similar poets, at odds with the poetic programmers. Computer-generated poems build an experience with technology where the role of the computer is often intentionally hidden. The human role remains as the author elects what pieces to show. Other poets, like Le Fraga, are playing with ways the success of their work depends on the explicit role of technology. In either context, the computer is a tool. Whether the author acknowledges technology’s role determines when the computer stops being the canvas and becomes the painter.

KAMILLE JOHNSON B’16.5 is not an algorithm.