Renaming and Reclaiming Spaces of Power 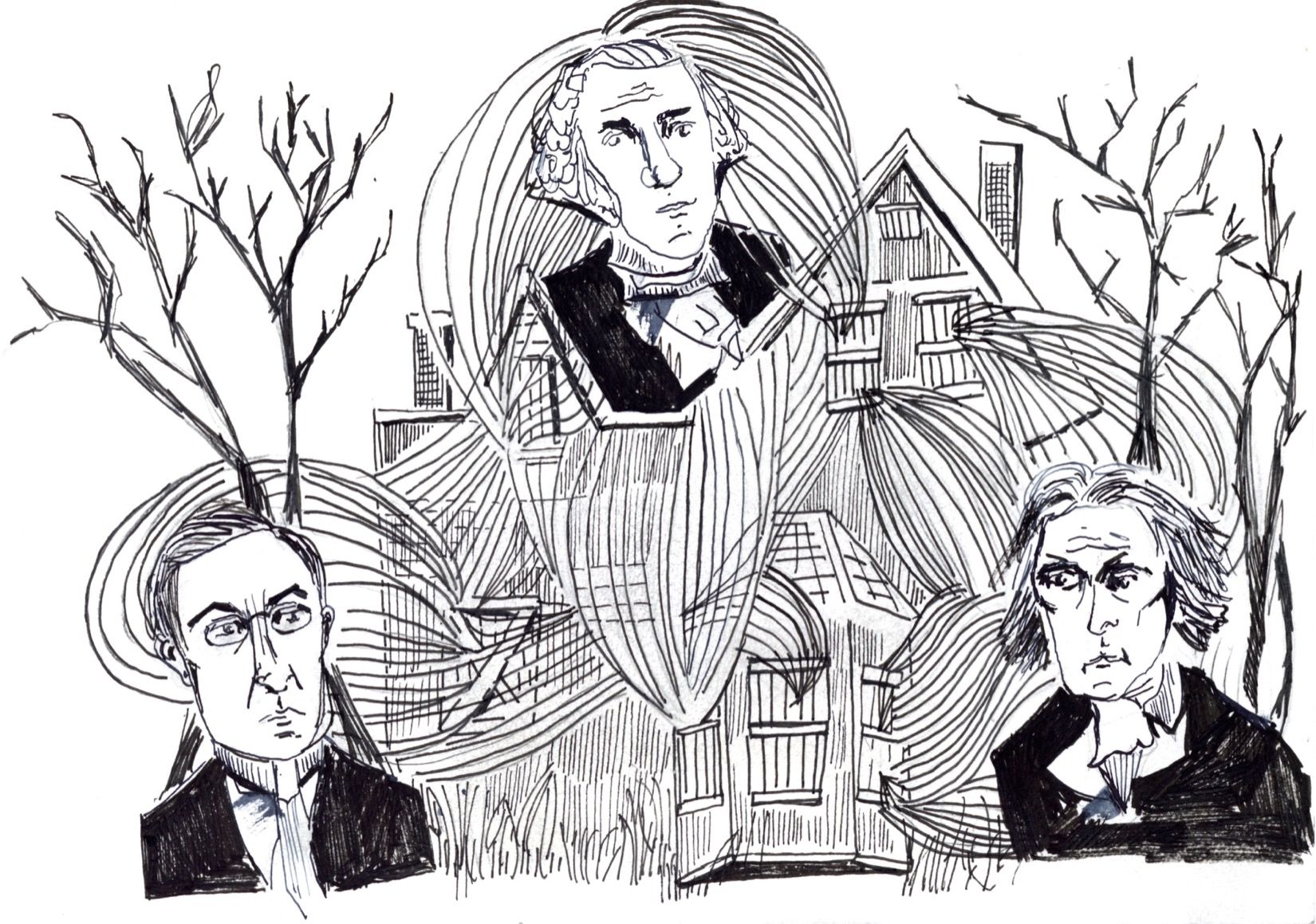 What is peculiar about ghosts? They are the dead. But there is of course no consensus on what it really means to be dead. So, that is a dead end. But a ghost is not only dead—it’s also sort of alive.

In life, our bodies lay claim to space on our souls’ behalf; by our flesh, we are permitted presence of mind. Deprive us of our mouths and we cannot drink; deprive us of our ears, and we cannot discuss. But spirits are the exceptions. These spirits retain some substance, some square footage, laying claim to space sans corpse. Though they have no hands, the doorknob turns. They are footless, but steps echo in the hall. Somehow, certain spirits stick around, and those that do are hard in leaving.

So the ghost takes up residence. Where ghosts linger, they may be ghoulish or benign, the bad ones quarters’ being haunted houses, and the good ones lodging in shrines. Haunted turf may be the site of an unfulfilled mission in life, a cemetery where the deceased was prematurely buried, or the hotel that played venue to some gruesome killing; likewise, shrines may be roadside memorials to those that died on the spot, household shrines, or locations attached to stories and legends. But, in all cases, it is the relationship between the ghost and the living that differentiates the shrine from the haunted house. To the living, the spirit enshrined is a respected and accommodated guest, while the haunting ghost is a hostile presence—the crucial question being, does this spirit wish me well? If the answer is yes, then it gets a site of pilgrimage and reverence. If the answer is no, then suffering ensues.

Fortunately, for those fiendish spirits that won’t let go, there is the old science of exorcism—a vital art of metaphysical evictions. Where they are unwanted, spirits must be driven out. Exorcisms and de-hauntings may involve spells and chants, oaths and rituals. They are often communal affairs. In Tibet, there is the annual Gutor, or the Day for Exorcising Ghosts; everybody sweeps and cleans the home. An old remedy on this continent is the burning of sage brush with an open window—to smoke it out, though it has no lungs. But an exorcism may also begin with a petition.

Of late, two uses of the petition tactic have captured widespread attention—perhaps because the haunts at stake are tied to the Oval Office; perhaps also because they are taking place at those age-old keeps of political power, the Ivy League universities. Demands have been made to change the names of institutions that are imbued with the racism and malevolence on account of their historical namesakes. While these are not exorcisms in the traditional sense, the justification and intent is clearly parallel: where a hostile spirit has set up shop, living residents want to drive it out.

Earlier this year, students at Yale University called for the metaphysical eviction of John C. Calhoun, the late South Carolinian politician and former Vice President of the United States. To do so, they want to remove his name from the Gothic-style residential complex known since 1933 as Calhoun College. His chief crime is clear: Calhoun was an unapologetic racist. He famously asserted slavery to be a “positive good,” not a necessary evil, which should be maintained for the economic and social benefit of the nation. Such is the reasoning behind the petition to remove his name that attracted almost 1500 signatures within the Yale Community. His name and his image lay claim to the building and the lawn, and students do not feel safe within the walls that hold up his legacy. The college has been made a receptacle for the concept of Calhoun, and the idea embedded in the name is clearly not friendly to many of the school’s denizens. Where students are forced to live in a shrine to the dogged suppression of rights, living is as living in a haunted house.

Following suit this November, the Black Justice League at Princeton University called for the removal of all references to Woodrow Wilson, in name and image, from the walls and facades of the school. Wilson is all over Princeton—upon inauguration as the 28th President of the United States, he was already used to being called “Mr. President,” having been Princeton’s 13th. He is remembered for heightening the institution’s academic rigor, and for lessening the grip of the Protestant elite by extending power to Catholics and Jews. Natural, it would seem, that his portrait should hang in abundance, and his name be given to the School of Public and International Affairs. But he is also remembered for the limits on this extension of friendship and race-restricted power. For Wilson, the list of social barriers to be broken down at the school did not include the color line. As University President, he did his best to prevent Black Americans from enrolling; as Commander-in-chief, he upheld the separate-but-equal doctrine with vigor. Addressing civil rights activists in 1913, he turned their arguments that segregation severely restricted Black peoples’ participation in society back on the indignant activists: regarding segregation, he told them that “if you take it as a humiliation, which it is not intended as, and sow the seed of that impression all over the country, why, the consequence will be very serious.”

Wilson was of a different era and a different caliber than Calhoun: separate-but-equal was, for Calhoun, a preposterous extension of liberty. But the content of the message is fundamentally the same one of Black subjugation. Many students at these universities do not want to share a room with a ghost—especially not one that would force them out of their beds and insist they sleep contentedly in the closet. This logic has proven potent: exorcisms at Princeton and Yale have drawn widespread attention in the press, and continue to gather momentum in the broader context of racial justice and civil rights campaigning nationwide. The case presented by the Black Justice League last week is now backed by the New York Times Editorial Board, and pressure within the University is mounting. These movements are bringing toponymy—the naming of places—into the light as a crucial political battleground. But to this field, the movement against structural oppression is no stranger.

Naming places as a right of conquest is an ancient practice; overthrowing the previous name is just as old. But we might trace the events of recent months to 1963, when, under mounting social pressure, the Federal government instituted a blanket change for the country’s maps. Where it occurred in hundreds of place names, the word n—r was changed to Negro. As Negro was recognized as a pejorative soon after, many of these names were changed again. Some were changed to honor specific African-Americans associated with the sites, or otherwise given an entirely different label; Negro Head Creek in North Carolina was supposed to have been changed in 1987 to Salem Creek, but this change was not fully executed until 2012, when citizens renewed their interest in making the change. Campaigns have been waged to engender similar reforms for offensive terms like squaw, guappo, gringo, and gook, but with only patchy success. And in 2010, The State of Rhode Island and Providence Plantations put to a vote the possible removal of the rarely-uttered second half—any change was voted down.

A similar amendment had been put forward twenty years previously. “Providence Plantations” merited removal, said the 2010 bill’s sponsor, Representative Joseph Almeida, because it was crucial “to recognize that slavery happened on plantations in Rhode Island, and decide that we don’t want that chapter of our history to be a proud part of our name.” And over the last year, petitioners with the expressed support of NAACP have demanded that Georgia’s Jefferson Davis and Robert E. Lee be sand-blasted from the Stone Mountain monument. A petition in this case (now with nearly 13,000 signatures) does not advocate removal. Instead, petitioners demanded that the legendary hip-hop duo Outkast—comprised of Andre 3000 and Big Boi—be carved alongside the horse-mounted Confederates, driving a Cadillac. No change has been made—the argument that the erasure of monuments is an act of historical revisionism has held strong. But the petition challenges the right of these figures to hold territory when their presence is hurtful to the viewer. People would rather celebrate Outkast. Like the ghost, names and pictures form a psychic geography that influences relationships to a place. Appellations are another form of “hostile architecture”—like the Camden Benches and anti-homeless spikes that regulate behavior in public spaces.

If the criteria for renaming is extended to include any figure of power with a record of racism, then the exorcists have addressed only a tiny fraction of candidates. The names of elites who dehumanized and deprived others of their civil rights are enshrined across the country. At least one president left us a very clear record of how he felt about residents. From his home, George Washington advised, “I know of no black person about the house who is to be trusted.” He reproved the “discontented temper of the Indians and the Mischiefs done by some parties of them” in response American settler-colonialism beyond Appalachia. Exercising his grip on that territory, he evicted scores of Scots-Irish who had settled on what was by then the first Washington County, and proceeded to sell these farms at a very reasonable profit. George Washington—phantasmagoric landlord of one State, one District, 4,974 Streets, 31 Counties, and a dozen institutions of higher learning. Today, many of us can expect to live on Washington, or in Washington, at some point in our lives. He is mobile, too, his face hitching rides on the quarter and dollar from pocket to register. Such spirits proliferate and pursue.

A vast swathe of the country is given over to these names, and a movement is being made to change that. Though it is unlikely that a mass revision of the nation’s toponymy will come in the near-term, these well-publicized demands have brought new contestation to the cultural landscape. Whether the spirit behind the names that inhabit this country are benevolent or oppressive comes down to the relationships between the current inhabitants and those for whom these spaces have been named. It would seem that those who must sleep within the walls have the greatest stake in the naming and re-naming of the house, and thus should have the greatest say in whether these names are retained or replaced.