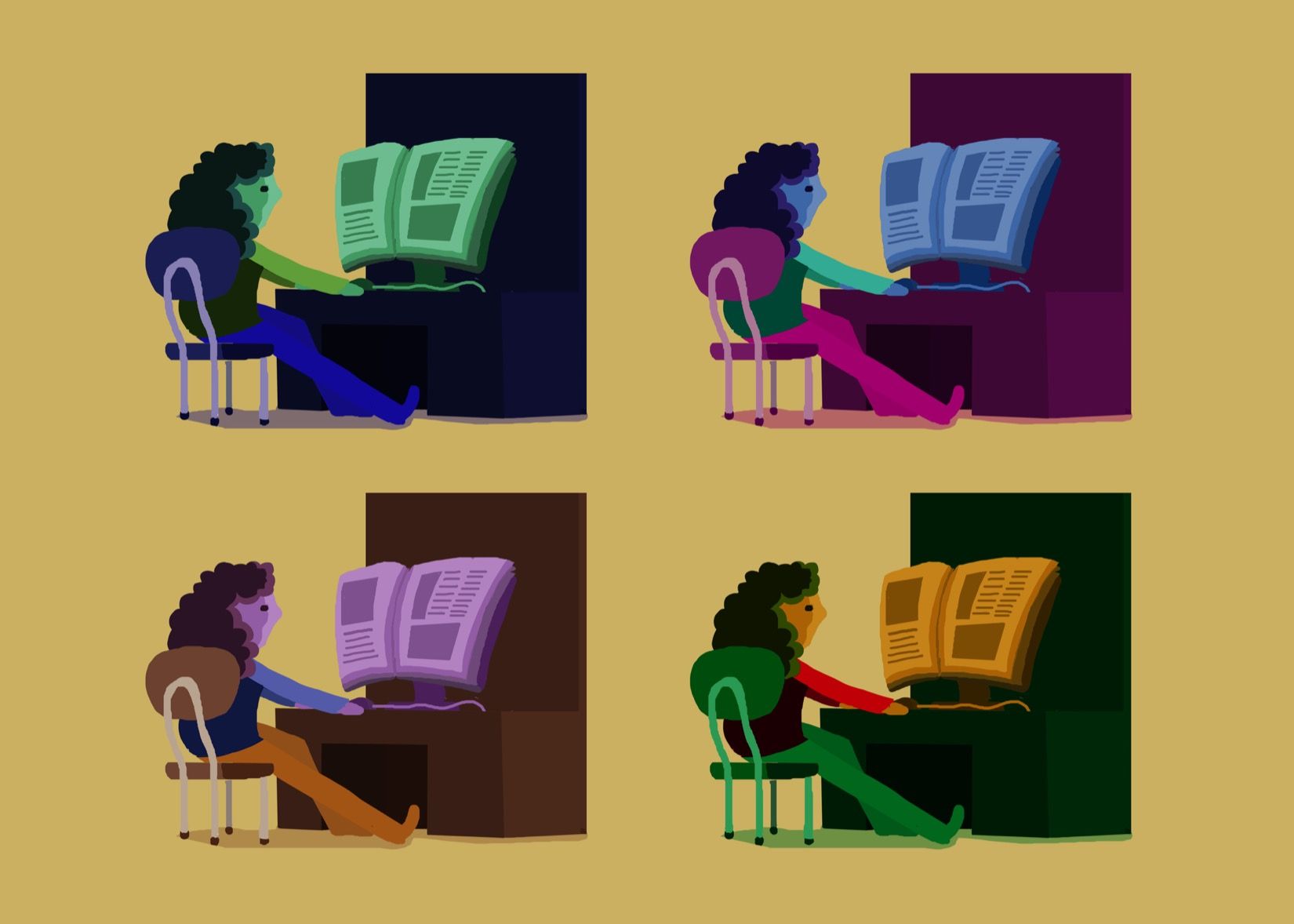 Every day at 8:45 AM, Village Green Virtual’s 210 students walk through the lobby and scan their IDs on the wall before entering the body of the school. They then head to their “workstations,” 36 square-inch cubicles equipped with thin client desktop computers. Workstations are clustered generally by grade-level into learning centers (LCs), which resemble typical open-plan offices, save the playful wall decorations: posters of leaping dolphins, Star Wars characters, and Marvel superheroes. Adjoining LCs are rooms that act as mini traditional classrooms called “workshops.” There, teachers lead small-group lessons, work on projects with students, and offer extra help. While workshops accommodate offline learning, they too are outfitted with LCD projectors, Android OS-based laptops, Chromecast, and ELMO document cameras. The school’s overall computer/device to student ratio is 1.5 to 1. The teacher-student ratio is 1 to 11.

Village Green intentionally breaks the high school mold to resemble an adult work space. “I personally did not want an environment that said ‘school,’” Village Green’s principal and founder, Dr. Robert Pilkington, told the College Hill Independent. He wants his students to feel they are entering a very different learning environment from the ones they grew up with: one that rejects collective routines and supposedly gives kids agency in how they use their time.

A classroom for the new age

Village Green’s desktops run on a “thin client” system, which means none of them have their own hard drives; all of the computing power is instead drawn from a server located in a separate, temperature-controlled room. Dr. John Butler, the school’s Director of Academic Planning and Logistics, says thin client systems are user-friendly, cheaper to maintain than standard PCs, and easier for administrators to control because all the desktops are unified by a central data center. Since the school’s inception in 2013, Butler says they haven’t had to replace more than a keyboard or two, and they have never missed a day of school due to a tech malfunction.

In fact, Village Green doesn’t even have an IT specialist on site. Instead, they outsource tech help from a group called Envision Technology Advisors. Envision’s Chief Technology Officer, Jeff Wilhelm, told the Indy via email, “When you have an environment with 200+ students all using full screen 1080p video and audio, performance is key. This is why we monitor in real-time the performance of the environment to ensure that there are no deviations in workload that would negatively impact the user community.”

Village Green students spend most of the day sitting at their workstations chugging through lessons of their choice on Edgenuity, an online curriculum used by one million students nationwide that includes Advanced Placement courses and conforms to Common Core standards. As students work, teachers, who are each certified in a traditional subject such as Math or English, float through their assigned LCs to offer one-on-one help. If they aren’t directly helping a student with Edgenuity or leading a workshop lesson, teachers are observing student progress via Android tablets.

Students say that it is common to take three or four quizzes per day. While this might sound like a drag to the average kid, a quiz on Edgenuity feels more like a checkpoint to a Village Green student than something they need to cram for; kids, the school says, are tested when they are ready, and not because a teacher told them today was the day. Dr. Pilkington calls this system a true meritocracy. “Those kids who put their noses to the grindstone can accelerate in an intense way,” he said. One student last year graduated a year early, allowing her to get a job and start saving money for college. Likewise, students who fall behind the pace of their classmates, the school says, can catch up at their own speed without being discouraged.

Village Green is the only school in Rhode Island completely devoted to “blended learning,” an educational style that mixes aspects of traditional classroom learning with e-learning, instruction via a computer. Today’s educators, as well as Silicon Valley’s new-wave salesmen, are increasingly asking the question: how could schools better serve students with the technology at our fingertips? Blended learning, according to its advocates, tests the idea that embracing technology doesn’t come at the cost of meaningful human interaction: rather, selectively engineering its presence in schools could give kids ‘empowering,’ and ‘custom-built’ educations.

Cyberlibertarian rhetoric aside, to be a Village Green student is, of course, also to be under constant surveillance­—by your teachers who double as data analysts, the administrators who control your screen, and a group of IT specialists you have never met. Particularly given there’s no gym class, or art, or music, it all feels rather Orwellian.

Village Green attempts to offer students freedom from the sometimes crippling structure of a traditional public high school. But in doing so, it must constantly reckon with the freedom students lose by limiting experiential learning and emphasizing constant progress analysis—the model must fight to supplement the tech with human touch. There is also the question of what world it is that Dr. Pilkington is preparing his students for—one in which total surveillance has replaced trust? One in which self-reflection takes the form of computational feedback? Maybe, he’s just pragmatic. 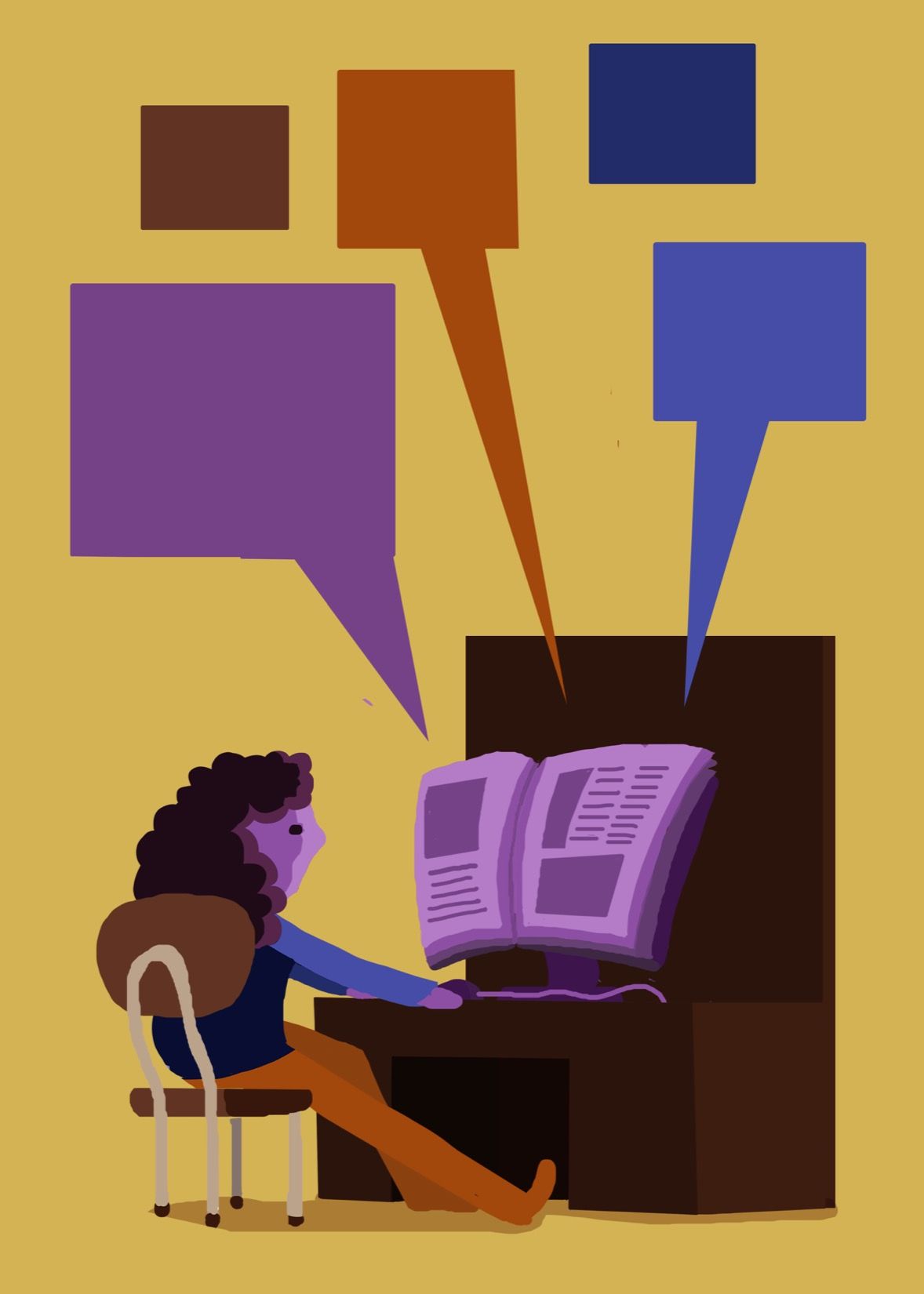 Dr. Pilkington founded three other charters before Village Green, along with the Rhode Island League of Charter Schools, and he is the longest serving administrator in the RI charter school movement. In Village Green’s 2012 proposal, Dr. Pilkington writes that he began pilot work on the school in 2001, when Facebook was still three years short of its cultural explosion. By the end of the proposal’s prefatory letter, he is clear about his aspirations for Village Green: “How will the e-learning environment truly transform education? Instead of just wanting to know the answer to that question, this application aspires to be the question and be it by purposeful design.”

The Rhode Island Department of Education (RIDE) is also a blended-believer. In fact, the state has set out to become the biggest name in blended learning nationwide. In August 2014, RIDE announced a partnership with The Learning Accelerator (TLA), a California-based nonprofit organization that supports “the implementation of high-quality blended learning in school districts and states across the US,” according to RIDE’s announcement. With the help of TLA’s initial $100,000 grant, RIDE has launched a five-year strategic plan to integrate tech-based learning into all of the state’s 296 public schools, and a communications campaign to increase the initiative’s visibility. Providence is the nexus of the RI movement, home to a blended learning consulting company, and annual host of the Blended Learning and Technology Conference, which will draw speakers from across the country for the fifth time this April.

Village Green students constantly meet quantifiable checkpoints by taking quizzes and completing courses with a large audience of coaches and analysts helping them. Vigilant data-analysis, the argument goes, is essential in a school that lets teenagers manage their own time. Dr. Pilkington and Dr. Butler both claim that keeping students on track can take a considerable amount of prodding, particularly for students who are new to e-learning. Kids, in their pedagogy, need feedback to develop the ability to gauge the value of their minutes, to locate their mental thresholds, and frequently push them.

For better or for worse, it seems this automatonic method of education often turns students into competent, independent time-managers prepared for a modern world. Edgenuity’s Vice President of Core Curriculum and Credit Recovery, Deborah Rayow, told the Indy via email that she believes that beyond keeping kids on track, individualized analysis can also engage students more in their own learning by giving them “the same knowledge, data, and information made available to the teachers.”

While this numbers-centric educational model may be efficient, it is troubling to many educators who see excessive quantification as stifling to creativity. It is harder to feel failing is okay, they reason, when all of your actions are measured and recorded. However, this might also be understood as another iteration of today’s standardized test-obsessed public school system— which ballooned after the passage of the No Child Left Behind Act in 2002, when annual state spending on standardized tests rose from $423 million to almost $1.1 billion. In a typical public school classroom, even smaller tests and grades carry considerable weight: they often shape cultural environments of hyper-competition among students, and equally debase experiential, unstructured learning by influencing students to “master the test” instead of focusing on learning the material.

Village Green is up-front about its high rate of teacher attrition: it’s tough to keep people around. Without routine class schedules, Village Green teachers are always on the move, spending ten minutes with a student on algebra, another 20 with one who can’t figure out factorials, leaving them almost no time away from teaching. Moreover, with students as routine-makers, teachers don’t have their own classrooms to call home, a space in which their personal authority is established. It can be both exhausting and jarring for teachers who are used to a traditional model. What does it mean to be a teacher when you don’t have your own class? Even eerier to many educators is that the blended approach might be a front for purely labor-saving technology; computers will displace the teachers, will affect their ability to unionize, and will outsource more of public education.

Village Green argues it needs its teachers to supplement Edgenuity’s curriculum. Dr. Pilkington smiles when he says “You really need a human to teach writing.” Blended proponents are careful to remind their naysayers that the model is called “blended” learning for a reason: good teachers are crucial to enlivening students’ virtual days. They are the creative catalysts that help students feel their education with workshops and projects. Students at Village Green praise their close relationships with teachers, though their connections could also be attributed to the school’s tiny size, irrespective of its unique tech set-up that facilitates one-on-one interaction.

Heads, shoulders, zeroes, and ones

Dr. Pilkington told the Indy “We don’t want technology to be the star of our show.” Yet, for many onlookers, it is hard to shake the feeling that the Village Green’s screens are violating the sacred ground of education, a zone that has since ancient times been fundamentally based on the constant exchange of human thought.

“The autonomy provided to charter schools comes with increased accountability for results,” RIDE’s charter school FAQ explains. Ultimately, all of Rhode Island’s charter schools, including Village Green, are performance-driven, designed by the state to offer underserved and “at-risk” students a high-caliber alternative to traditional public schools. Harnessing the digital age, however, is not in and of itself progress.

LIZ CORY B’18 wrote this on a computer.