Photoshop and its Discontents

When a function’s higher values are assigned darker colors, they create an image like the one below, called a gradient.

Photoshop allows users to create multi-colored gradients­—and the color selection tool itself is also a gradient, which enables users to pinpoint the precise hue and tone they desire. 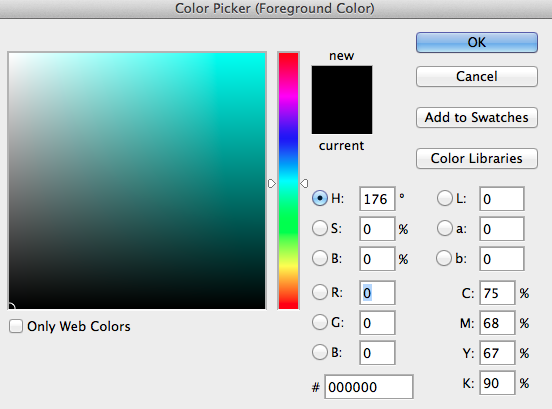 But notice something about the Photoshop interface: each individual button features a tiny gradient.

Mimicking the play of light on a three-dimensional surface, the gradient makes the button look like it’s tangible—as if one could press it with a finger, rather than a cursor. The use of gradients and drop shadows (the grey shading below the button) is one of the most common tropes in web design. Here, it pops up in the Safari header:

And again in the dock from OS X Lion (also featuring hazy reflections as though the icons are sitting on frosted glass).

The illusion of dimensionality in computerized buttons, windows, and tabs is part of a larger design concept known as skeuomorphism. The term describes any material that imitates another older technology in a way that isn’t structurally necessary for its present form. Historically, the grounds for this illusionism have been principally economic—a cheaper material can impersonate a more expensive one. The first school of Roman painting could be considered skeuomorphic, as it used painted fresco to simulate a more luxurious material: marble. In other instances, skeuomorphism is used to dress an object down and make it appear retrograde—creating a sense of familiarity and user-friendliness via nostalgic byways. In a digital context, this can range from the simple evocation of a push-button to complex graphic representations of dials, bookshelves, calculators, or 1950’s-style microphones. These simulations affect not only the aesthetic of the interface but also how users interact with it; for example, on many e-readers one must actually pull a “page” back by swiping to turn it, as in a real book. The below designs are all by Apple. Ever since the company introduced its trash can and burning bomb icons in 1982 and 1984 respectively, the company has been churning out skeuomorphs with the fuming vigor of a computer running a particularly high resolution gif of an assembly line.

While standard today, these designs will someday mark the late 20th and early 21st century as a transitional era. As society has shifted from analog to digital technology, and from single-functional to multi-functional objects, the relationship between reality and simulation has taken on a new level of absurdity. Digital skeuomorphism is, in fact, a new pole in the centuries-old progression towards the hyperreal.

When questioned about the system update by USA Today, the longterm Apple designer Jonathan Ive disclosed: “Before [with the original iPhone OS] the shadowing effect we used was a great way to distract from the limitations of the display. But with a display that’s this precise, there’s nowhere to hide. So we wanted a clear typography.”

Basically it was more effective, with a limited display resolution, to simulate physical, tactile reality than to create iconography totally native to the digital world. Ive’s language paints skeumorphism as a place to “hide” for programmers and users alike. In the fissure between the real and hyperreal—the tiny holes between the cells of a screen display­—skeuomorphism girds our loins, using the uncanny familiarity of the push-button interface to create a false sense of wholeness. But as the holes between the cells become asymptotically miniscule, the resolution as clear as the human eye can process, the digital interface can lose its mimetic pretenses and develop its own confident, clear-voiced language. Form is free to follow function, in ways specific to a smartphone’s functionality, rather than function quoting form.

But! While skeuomorphism is in decline, it isn’t gone completely—gradients are still present in the iOS 7 update as a vestigial holdover. The drop shadows were scrapped, so the buttons have no simulated vertical dimension, but fake soft light still plays across them as if they’re bulging slightly towards the middle. The transition between reality and hyperreality is marked by such paradoxes. It’s as if the designers are slowly weaning users off reality, stripping away one visual characteristic at a time. The creepiest part may be that no one seems to notice, or care. Skeuomorphic design will someday be an important artifact of a society in transition—a visual embodiment of the shift from partial (and tentative) to complete immersion in the world of technology. But, keeping with culture’s pendulous sweep, once the technology reaches its zenith of high modernism, once everything is flat, functional, and devoid of referent, it will need to rebeef its digital structures, as if fattening hogs, in nostalgic tribute to the skeuomorphs of yore.

Blurring is, in Photoshop terms, the process of equalizing information. The tool modifies groups of pixels to conform to a more average value and tone. In the below image, the outlier values—the brightest whites and darkest blacks—were made less distinct from their surrounding pixels, lending the image a greater degree of uniformity and thus detracting from its clarity.

In art and photography, blurriness has suggested a degree of subjectivity. It forces a consciousness of the filter through which an image, without exception, must pass—the eye of the artist, the lens of the camera, the editing booth of the corporate censor. Contrasting focus with visual ambiguity, blurring can also create the illusion of depth or movement.

Painters began using blurriness as an illusionary technique around the time of the Renaissance. Called sfumato by the Italians, it involved building up gauzy layers of semi-translucent oil paint to create the look of fleshiness and dimensionality. Da Vinci, with his mysterious, ethereal maidens cast in soft shadow, is considered the progenitor of this delicate technique. Sfumato, like Brunelleschi’s system of linear perspective, allows artists to evoke three-dimensional depth on a two-dimensional canvas. Both perspective and sfumato require the painter to forfeit certain visual information, surrendering it as softened noise, in order to depict a unified viewpoint. Perspective hides the two sides of a building not facing the viewer; sfumato mists over pupils and irises to capture the ambiguity of a model’s sidelong glance, or foliage in the background to create a sense of distance. 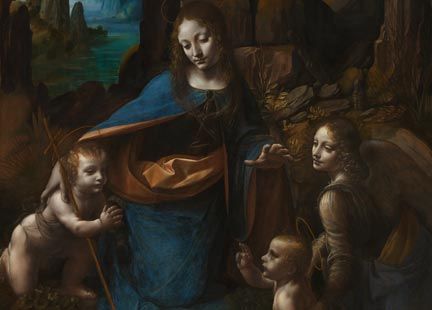 In addition to increasing realism, the commitment to a singular point of reference—where the artist stands, leather boots planted firmly in the dirt—reflects the Renaissance-era belief in the individual subject. The newfound wealth of the merchant class in Italy allowed for an outpouring of creative endeavors and a reinvestment in classical learning, breaking from medieval scholasticism (which answered only to God). This idea of humanism valued reason over pre-established doctrine and exalted human creativity and accomplishments. Vasari’s Lives of the Most Excellent Painters, Sculptors, and Architects, first published in 1550, lent importance to creative individuals themselves, thereby popularizing the category of artistic genius. The artist, whose status is now elevated above craftsperson, who now paints self-portraits, and in some cases enjoys celebrity status, can suddenly depict, more so than ever before, his own unique vision. In spite of the constraints of patronage, individuality began to flower in the form of a subjective artistic viewpoint.

But today, blurring has lost its association with individuality and has instead become a symbol of mass conformity. Our analytical anchor, Photoshop, is much to blame. In the age of mass media, the artist’s eyes must do their best to anticipate millions of other eyes—a teeming optical ocean that will soon immerse every square centimeter of visual information. The blur, too then, must be all-consuming, so everything and nothing can be in focus, so a face can be abstracted from flesh to poreless polyvinyl, from thigh to thigh-dea. Thus, a normative category of beauty can develop not only from the specifics of a classical ideal, but from the equalization of a sourceless gaze.

The eraser tool in Photoshop is relatively self-explanatory: it serves to erase. Because a Photoshop image is constructed in layers, erasing reveals a segment of the image underneath. Here, the image was a single layer, so the canvas—covered in grey and white checkerboard—is exposed. Because we start off seeing white, the checkered reveal has the essence of a peep show, or an archeological dig. 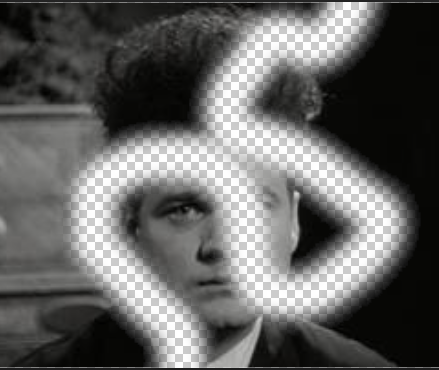 Partial erasure is a method of combatting mistakes, or even a subtractive method of creation. For example, this graffiti artist creates images by washing the grime off walls, ironically cleaning as he defaces.

But artistic practices of erasure are bound up with ‘non-artistic’ practices of censorship and iconoclasm. Both are attempts to revoke and rewrite history. Iconoclasm refers to the politically, socially, or religiously motivated destruction of artworks.

A notable example is the erasure of Egyptian empress, Hatshepsut, by the man she had kept off the throne for decades: her stepson, Tuthmosis III. To the right of the bas relief of a man, Hatshepsut’s body has been chiseled out of the image, leaving a textural silhouette. 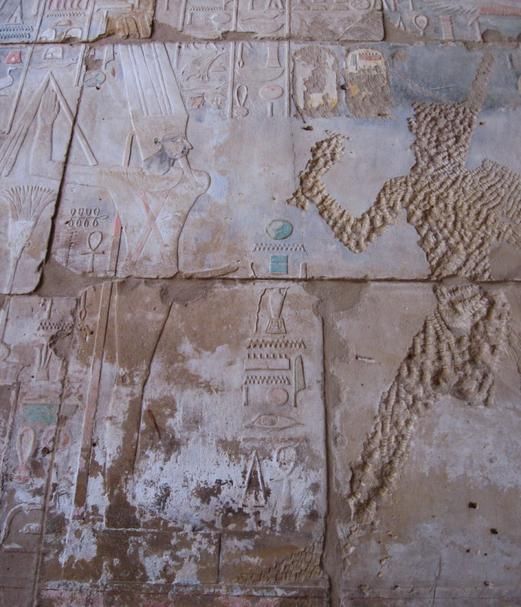 Unable to remove the Queen during her lifetime, Tuthmosis II instead scratched out her image and all records of her existence after her death. The gesture is a symbolic act; a murder of sorts, considering the importance of image and enduring legacy to the Egyptian ruling class.

The rhetorical and symbolic properties of art were exploited by the pharaohs to retain power, and Hatshepsut in particular used art to combat the greatest threat to her legitimacy as pharaoh, her gender. She was the third woman to become pharaoh in over 3,000 years, so in order to appear strong, she was often depicted as male with a false beard. The iconoclasm was Tuthmosis’ successful attempt to negate Hatshepsut’s influence and censor her historical legacy: she was virtually unknown to the Egyptian people (or anyone else) for millennia.

But we do know of her now, as an erasure that we can talk about because it was not complete. While Tuthmosis eliminated Hatshepsut’s monuments and historical records, he failed to destroy her ka statue, the durable sandstone vessel designed to literally house the Pharaoh’s immortal soul, or ka. Intentionally buried or erased from public view, its significance was self-contained. But it was ultimately Hatshepsut’s tomb and the ka statue inside that re-established her place in history upon unearthing in 1903. Her accomplishments are now well known and Tuthmosis’ effort to erase her has finally failed. But by discovering the statue and bringing it above ground, it was transformed from a living home for her soul into a dead piece of history. We might see Hatshepsut’s now knick-knackety soul-hole adjacent to a classical statue, inspiration to Renaissance artists like Leonardo (you might know him from “Blur Tool”). Artworks thrice shaped by erasure: the subtractive chipping of the artist’s chisel, the corrosive sands (or hands, in Tuthmosis’ case) of history reducing so much of human creation to grandiloquent scraps, and the discernment of the institutions that decide how to preserve and display these works.

The museum exists to edit, and editing is always key. In any mode of creation that speaks politically, like Hatshepsut’s monuments, there is a propagandistic effort to edit the truth. What sets Photoshop apart from the modes of creation that precede it is that it is principally an editing software: it presupposes you’re bringing some pre-existing content and reconfiguring it in whatever humorous, surreal, sexy, polemical, or idiotic way you see fit. Photoshop is desperate not to be alone in the world. Tabula rasa is its worst nightmare—its checkerboard underlayer exhibits ska-punk defensiveness at being stripped bare. And if you’ve copied an image to your clipboard, the program will, with quiet optimism, automatically configure your new file to those exact dimensions—like making a lover’s bed in hopes he or she will return home from war. Nothing is new (to speak of redundancy in a redundant way) but we can always find new ways to organize. Photoshop and its metaphors show us that creating and editing are only separated by orders of magnitude, blurring further and further into one another and into the post-grey ether.