Radios in Our Heads 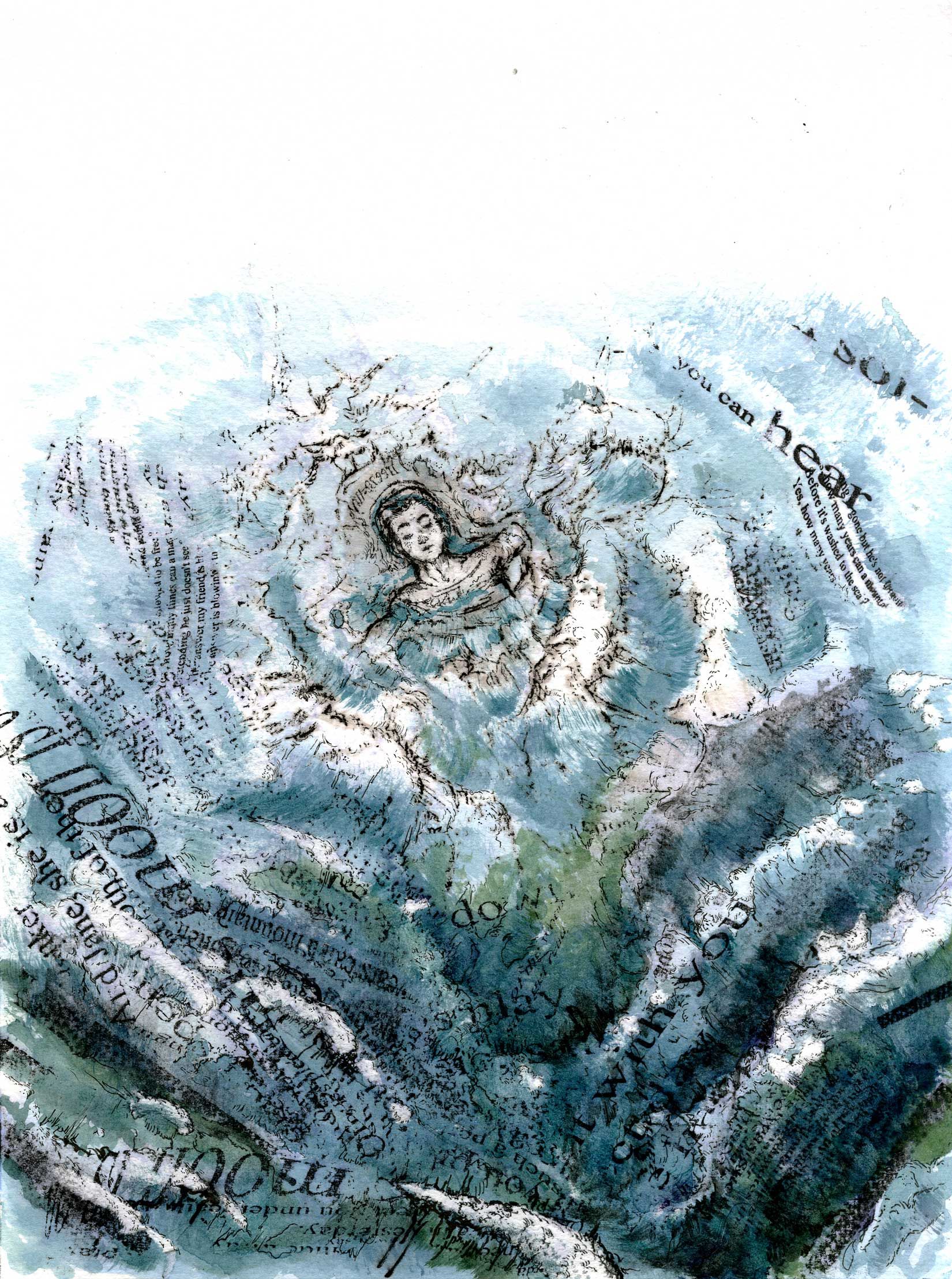 In a tower on an island by a dock with a kayak, I write songs. The boat is built for one. The rolling waves strain the plastic in a low, resounding creak. There are other boats in the harbor. Sometimes, in the shadows of the red flashing lights, I wave from a distance and think I see a face. Sometimes I worry I’ll be forbidden to return. Sometimes, late at night, without a guitar or a notebook, in the churning of the waves, I hear something.

Lou Reed once said he doesn’t write songs: he tunes into the radio in his head.

Paul McCartney wrote “Yesterday” while awaking from a dream. The melody was in his ear. He spent the next month or so asking everyone he knew where the song was from.

What’s a writer supposed to make of this? Are we supposed to wait in our beds with the same eager tossing and turning of a child before the last day of school? Can we, too, listen to radios in our head?

Just numb for the break-up

Say what’s up, I freeze-up

That attacked me one winter on the way to a hill. I was dragging my friend in a sled behind me. It beat at me. The hill was full of children. The snow was powdery and the sledding was awful and the kids held flakes in their arms. I felt old and walked back alone in the blizzard.

In class the phrases shook my leg, cut with each crinkle of paper, rested on each exhale... I dismissed them; they seemed too simple. But they form a stanza that clicks, aligns, disaligns, and bangs in a painful, playful way. They sting at my jaw. They plague my internal monologue. They’re not perfect, but they’re alive.

Is songwriting then, just listening? Is it wading through daydreams until some mistakenly strummed chord change brings you to shore? Is it waiting for a lilting phrase to be misheard as melody? Is it an endless hunger to hear music all around you?

As a child I liked to hold my head under water and listen to the muddled screaming of children during swimming lessons. I remember little of the actual lessons. Feet must keep kicking, always pushing; if you stop kicking you sink. Our perception of speed is based on the heart. 60 beats per minute. Turn your head to breathe. Not too much; if you breathe too much, what are you left with? Don’t look straight ahead. You cannot destroy the water you can only relocate it. Water moves from one swimmer to the next. Breathe in. Breathe out. If you stop you sink.
The form, in many ways, is not up to you. You must keep swimming: your ear demands it. Finding a writer’s intention is like gathering breadcrumbs, or following a swimmer’s wake. The bubbling from the mouth; the little indents in the rapids from your foot; the slow ripples of churning hands. The writer moves too fast to give answers. All we can do is wonder about floating bubbles.

Rivers Cuomo, the frontman of the 90s power pop band Weezer, was after a master formula for writing pop songs. He analyzed hundreds of songs for form and tonality in what is now known as “The Encyclopedia of Pop.” Verse-Chorus-Verse-Chorus-Bridge-Chorus, Pre-Choruses, PostChoruses. These structures make the songs familiar; keeps them moving. It’s hard to cut a series of carefully crafted melodies that aren’t working, but it’s easy to cut a Pre-Chorus. Sometimes the drummer in my band comes into practice and says, “so after the pre-post-chorus leading into the post-verse there’s the pre-hook so I play the post-riff?” He laughs.
More often than not, a song that I’m writing emerges with a structure I’ve seen before. Songs are old in this way. They are all telling the same story, spouting from the same universal consciousness. They are the listening child with the submerged head as much as the swim-capped adult doing laps. In “Some Notes on Song” John Berger declares “songs are like rivers: each follows its own course, yet all flow to the sea, from which everything came.”

In the open ocean, wind reigns free, and seven times more water is sprayed into evaporation than on land. Climatologists estimate a water molecule spends about 3,200 years in an ocean. The water cycle, then, is mostly composed of ancient molecules, spraying in a constant, churning wind.

Once I went on a sea kayaking expedition. The moon lit the crests of the waves and the bioluminescence churned with our paddles. We rose with the sun. In the afternoon waves swelled to immense heights. Staying on the water became dangerous. We followed simple rules. Let the waves flow underneath. Keep your body steady. Paddle from the abdomen. The key is to not try to push through the waves, but to place your paddle in the water and let the turning of your body propel you. The most experienced kayakers don’t fight flips—they lean in, roll, and pop back up.
The most memorable song fragments seem to be those in which melody and lyrics align perfectly, as if they always existed in that form. I told my friend Sam as we watched the tremendous, glacial docking of a cargo ship by the bay, to listen to the inflections of McCartney’s “Hello, Goodbye.” Hel-lo. Stress-unstress. Good-bye. Unstress-stress. McCartney flips them, and all of a sudden the stresses seem to complete each other. Unstress-stress-stress-unstress. The phrase resolves to an unstress as if Hello is the proper response to Goodbye. The Beatles were masters of making phrases with this kind of resolve. In Songwriting Secrets of the Beatles, Dominic Pedler notes that a huge chunk of Beatles songs pair returns to the tonic chord with the lyric “home.”

I write songs in a tiny office with big windows and lots of light. I only go in at night. I sit at a desk and swivel in the chair. When things get hard I pick at the wood on my guitar. I pass out and take naps. I click the lamp back on, shake my heavy eyes, and dive in.

I read Neil Young used to mix like this: just south of San Francisco, he’d take a small row boat out onto his lake, push his way to the middle, and stand. He’d have his friend play the left audio channel play from his cottage, the right from his house. To raise the left channel he’d wave his left hand; for the right his other. The boat rocked between his feet. Keep your body steady.

This story might be true. Things sound different in different contexts. The field of audio mastering, the last step in producing a record, is devoted to homogenizing the listening experience across platforms. Many mastering engineers listen from their car, from outside the room, with and without headphones, drunk and sober. But these situations are radically different: do we want them to sound the same?

Music is one of the few types of art that is expected to function in several forms. The lyrics must seem reasonably good when read on the page. The song must have the drama to carry weight in a live setting, to engage the wandering eyes of a gussied-up audience in a dark, sweaty room. To seem careful and crafted when cradled against a listener’s ear. A good song is a supple structure, full of moving parts that are interchanging, rotating, fighting.

I reorder and I rework. The first existence of “Bored” is an iPhone recording from a few months ago. Bumps of the phone on the table and scattered singing. Gibberish, but the contours of the words are there. “Maybe Baby” never makes it into the song but has that gnawing sense of playful monotony. The words churn, the riff cycles, notes ring in my head; I fill six pages. Most of it stays gibberish.

“Do you consider yourself a songwriter?” someone once asked me. I thought, what an awful thing, to be a songwriter. Songwriters are dead. They have no potential. Hank Williams. Nick Drake. Elliot Smith. Their work is done. Of course I want to write Smith’s “Miss Misery” note for note and swim in the ocean until the world ends. I want that the same way I want to sink so deep into my bed one morning that I never come back. The same way when, hanging miles and miles above the ocean, I hope the plane never lands.

I saw Dan Wilson, songwriter and leader of the 90s band Semisonic, play in a café near the Berklee College of Music this past winter. He had thinned with age and his clothes hung loosely on his bones. He told stories between each song, about how they were written. At the end of the night he gave us each a copy of the setlist he’d made in gold calligraphy. He said, here is something to look back on in a few weeks, to tilt your head at and go, “ah.”

I had arranged for us to speak a few weeks earlier. I sat behind the merch table while he signed autographs. With each new fan his smile folded up and down. His eyes sparkled.

I tell Dan: I have a problem. I love the bassist in my band, but his bass lines just aren’t melodic enough. Do I add another person? Do I replace him? He tells me, you know, people will always try and tell you so-and-so is the weak link. But you get rid of them, and someone else will be the weak link. And eventually, you’ve just got a whole new band. When he started Semisonic, he said to his friend, “I wanna make music with you so we’re starting this band. You’re gonna play drums.” And his friend said he couldn’t: he hadn’t played drums since college. But Dansaid, “hey, look, I wanna play music with you, and this is what we have to do.” Dan smiled. “It wasn’t his dream to be a drummer, but it was his dream to be a rockstar.” Semisonic’s second album, Feeling Strangely Fine, went platinum.

Even when I write songs alone—and I always write songs alone—my bandmates linger. Sometimes I’ll be fiddling around with some chord progression and I can hear them. Evan’s frantic, sprawling drumming. Hariz’s deep, marching bass lines. Learning to write for a band is all about learning to recognize pieces that light something up in all of you. The direction to paddle is that which puts the wind to our backs. Those melodies which, for reasons none of us understand, all of us know when the drums jump out, and the bass dips in, and the guitar plunges into the depths of the unknown.

In some ways Dan’s advice is wrong—I’ve pored over the list, and as far as I can tell there hasn’t ever been a successful rock trio with a bassist that didn’t play melodically. But it speaks to a faith, I think, that every songwriter must have. Lou Reed’s radio in his head, Paul McCartney’s melody from a dream: these are terms for listening. Dan’s faith that Semisonic would work wasn’t blind—he saw something, I think, in his friends, some essence worth preserving. Maybe a band doesn’t make music so much as music takes form around a band. These days the bassist in my band plays nothing but melody. We can’t answer the question “what makes a good songwriter?” but we can listen for the things around us which take form, which keep moving, which make the world seem alive.

DASH ELHAUGE B’17 spent too much time listening to waves when he was supposed to be learning the butterfly.