What Am I Listening To?

K-Pop and US Torture Music 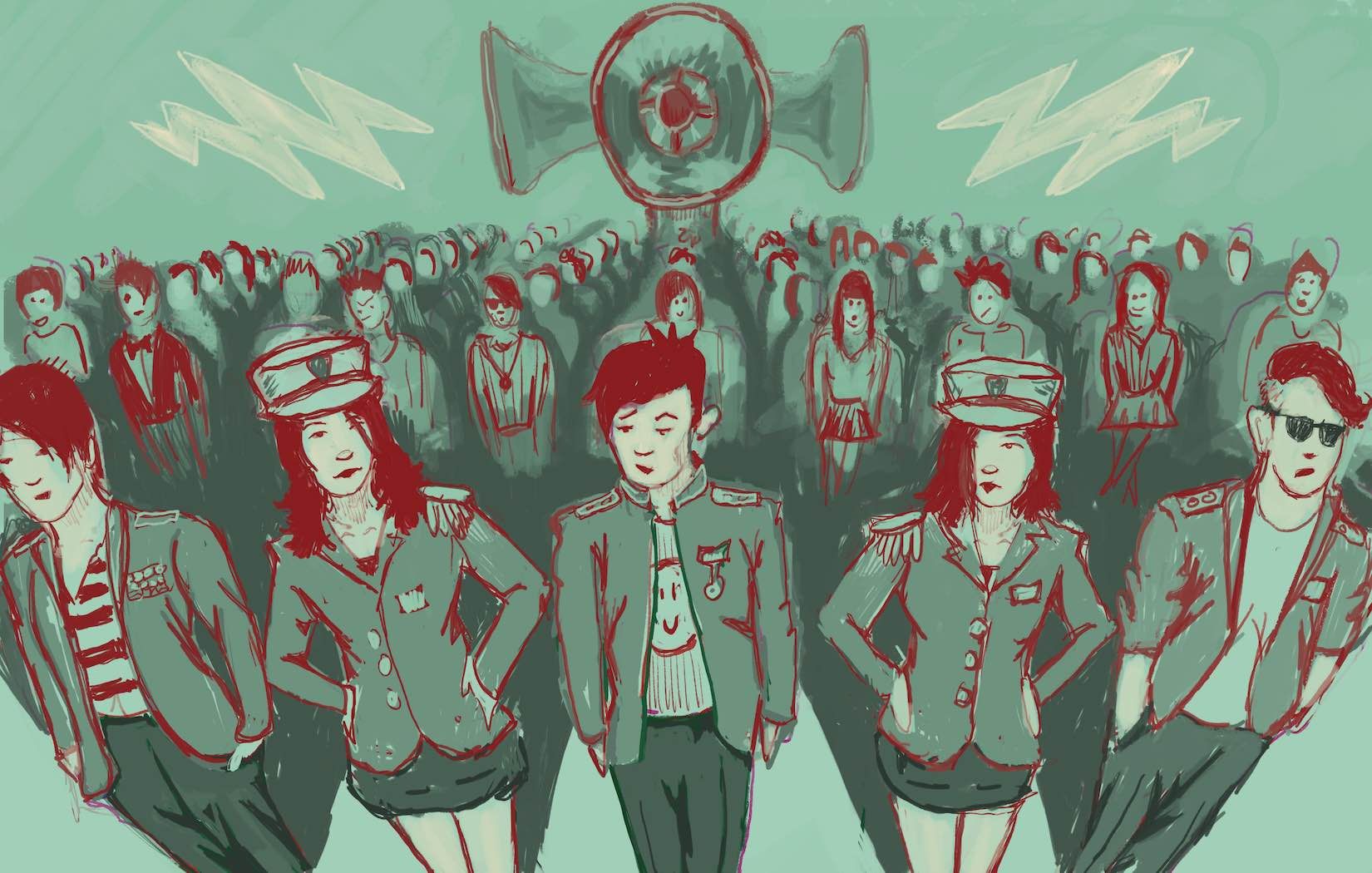 Tell me your wish

Tell me that small dream you have within you

Draw that ideal person you have inside your head

And then look at me

This August, shimmering waves of music surged across the hot no-man’s land between North and South Korea. Siren voices filled the ears of North Korean soldiers with Korean-Pop (K-Pop) hits between airings of political radio shows. This unusual form of audio warfare, conducted “so that North Koreans can learn that the world is changing” according to ministry spokesman Kim Min-seok, was performed in response to a land mine incident that had injured several South Korean soldiers earlier that month. In past border skirmishes, K-Pop has proved to be no laughing matter: in a similar exchange in 2011, Kim Jong Il threatened to turn Seoul into a “sea of fire” if the South Korean military continued to play their favorite tunes.

In this bewildering era of unending crises, demand for performer political figures, and creative means of corporate omnipresence, modes of seemingly self-expressive art have been mobilized toward the ends of state violence.

Now this world is simply your stage

A wave of cheers

In my heart, your body temperature, I’m your path.

The K-Pop wave has become South Korea’s most potent tool of soft-power. As one of South Korea’s largest exports, K-Pop has contributed to the transformation of its economy, culture, and global image from that of an industrializing nation, manufacturing semiconductors, to Asia’s cultural cutting edge. The K-Pop industry is intimately tied to Korea’s other commercial successes, such as Samsung; K-Pop stars, with their incredible amounts of cultural power, are the perfect platform for national and international marketing.

South Korea created an anthem and then transformed into that anthem’s nation. It was only able to realize its full cultural potential after manufacturing an expression of desire for inclusion into the world of cross-cultural symbols. In 2012 Korea’s Ministry of Culture, Sport, and Tourism estimated K-Pop’s economic asset value at around US$5.26-billion. This is no fluke; South Korea has been carefully investing 1% of its national budget in cultural assets since 1994, when South Korea’s then-president Kim Young-Sam allegedly heard that Steven Spielberg’s Jurassic Park netted more in export value than the sales of a million and a half Hyundai cars. The investment has allowed for the enormous success of a concept called “cultural technology.”

“Cultural technology” is a term coined by Lee Soo-Man, the founder of a leading K-Pop music label, S.M. Entertainment. In a 2011 speech at Stanford Business School, he explained that he created the term in the mid-nineties when S.M. Entertainment’s first decided to launch artists and cultural content throughout the rest of Asia, stating that, “S.M. Entertainment and I see culture as a type of technology.” “Cultural technology” comprises a three step process of K-Pop creation and export. In this process, future K-Pop stars are selected, invested in, trained, and contracted for many years. Successful trainees are then placed in carefully selected groups of eleven-or-so members that can reconfigure depending on the audience and culture. The K-Pop stars adjust themselves around specific cultural desires and incorporate the appropriate symbols, allowing every audience to simultaneously experience a sense of individual ownership of the musical product and the popular culture it indexes.

K-Pop is at times overwhelming, at times confounding, and somehow a continually alluring hybrid of beats, languages, and symbols. In a typical K-Pop hit, performers execute precise synchronized choreography onstage under flashing lights, their costumes morphing from schoolgirl dresses to military uniforms in the blink of an eye. Stuffed animals, bling, british guard hats, leather jackets, space suits, taxis: the world of K-Pop is loaded with diverse cultural imagery. The multi-million dollar music videos overflow with a refuse of symbols emptied of cultural grounding and are charged with global appeal. Yet, within all this spectacle, each star’s character remains miraculously unique and completely integrated into the delirium. Each group contains enough individual variety within the members to appeal to anyone within any given culture. The endless possibility of permutation is perhaps the key to K-Pop’s success; it can appeal to anyone and everyone; moreover, it can appeal to you.

Have you become buried by your ordinary life?

Now stop and wake up

You are my superstar, shining star, super star

Recent articles on K-Pop are shot through with militaristic language. The Atlantic’s piece, “How K-Pop conquered Japan,” (2011) and The Guardian’s article “Girls’ Generation lead K-Pop invasion of Japan” (also 2011) point to K-Pop’s formidable strength in terms of changing global power dynamics. The shifting of cultural and economic power balances between Japan and South Korea is especially striking in light of Japan’s relatively recent occupation of Korea. That the tables have turned and South Korea is now able to “invade” Japan is an irony made possible only by the Japanese public’s own demand for music.

Despite its ingenious and globally applicable formula, K-Pop owes much to Korea’s specific history. K-Pop is the sparkling consequence of a long love story between occupation and music. The Korean music scene began to draw on foreign influences from at least the early 1900s. For example, the classic “Oh My Darling, Clementine” transformed into “Simcheongga” and was reworked to express resistance to Japanese occupation around 1915. During the Korean War, American performers such as Marilyn Monroe visited deployed US soldiers in keeping with the United States’ own style of cultural invasion. This style of musical merging continued and grew after the Korean war until the mastermind Lee Soo-Man capitalized on and formalized the successes of these cultural layerings in the nineties.

I want to give them all to you

I’m wanting to answer your wishes

Your goddess of fortune

While K-Pop is a far reaching and dynamic musical expression of South Korea’s power, the US military has come to deploy American music as yet another weapon in its arsenal. Although the United States has culturally colonized with music for decades, recently, music has come to play a radically different role in US power structures from those of South Korea. Music’s relationship to the US military has become that of a violent tool in the hands of the torturer. From Iraq to Cuba, torture by music has become a method used far and wide by the US military to push suspected terrorists’ mental states to a breaking point.

Music as a violent tool of war (as opposed to early American or K-Pop style cultural colonization and domination) has long and noble roots in biblical times. As retired US Air Force Lt-Col Dan Kuehl told the St. Petersburg Times, “Joshua’s army used horns to strike fear into the hearts of the people of Jericho. His men might not have been able to break down literal walls with their trumpets, but the noise eroded the enemy’s courage.” Musical warfare picked back up during the Vietnam War. At that time experimentations with the effects of sounds and music created some strange occurrences: for example, US planes blasted funeral dirges to unsettle the enemy.

After the Korean War, the US military set up a department named SERE (Survival, Evasion, Resistance, and Escape) to train US soldiers to withstand enemy capture and interrogation. Now headquartered in Fort Bragg, North Carolina, SERE’s effect has somewhat changed. As covered by SPIN, an ex-Army interrogator named Greg Hartley who passed through SERE reported use of avant-garde musicians such as Diamanda Galas and Throbbing Gristle in SERE’s interrogation resistance trainings. While documentation is hard to come by, it is likely that those very trainings intended to fortify the soldier against musical torture came to be used as techniques to break prisoners in US captivity down. Importantly, SERE’s chief psychologist advised Behavioral Science Consultation teams at the prison at Guantanamo Bay. Guantanamo Bay has been the site of repeated music abuses. For example, in 2003 two suspected terrorist accomplices—whose names were eventually cleared—Ruhal Ahmed and Asif Iqbal, were treated with repeated exposure to Eminem’s “Kim.” Eminem morphed into heavy metal and the repeated sonic torture led Ruhal Ahmed to confess to involvement in the 9/11 operation, something which was later proved to be false. These were not isolated incidents. According to the New York Times, In the spring of 2002, suspected Al Qaeda operative Abu Zubaydah was subjected to “deafening blasts of music by groups like Red Hot Chili Peppers.” The list goes on.

By far the United States’ largest investment at a staggering $598.5 billion (more than half of the discretionary budget) the US military forms the foundation of the United States’ power. In the military’s use of music as a tool of war, one can see other modes of domination—cultural and economic—subsumed and executed under its gigantic reach. In this system, music and the individuality associated with its creative production become disposable weapons to break any adversary who has challenged the United States’ power. The military takes music, once what defined the United States, and transforms it into violent dehumanizing noise. The types of music used as torture tools range from 2Pac and Dr. Dre to Metallica, Rage Against the Machine, Britney Spears, Aerosmith, Meatloaf and many others.

In using music as a tool of war, the US military takes American music, some of it originally subversive, and uses it to enhance its power and to demean an Other who in most modern cases takes the form of a suspected terrorist. Does it matter that music was an expression of US culture? Perhaps yes, this element does matter: in using music as painful noise, the military rejects the worth in both an individual’s art and popular culture for the power of a weapon. Torture of a prisoner, torture of American culture at the hands of its supposed protector.

The military’s appropriation of an artistic expression like music completely undermines professed values of US culture like individuality and freedom of expression. While these values have long been called into question, the transformation of such an emblem of US culture into a tool for asserting power over an Other signals a widening void in the place of values. Perhaps this confusion is mirrored in South Korea’s empty symbols, where “Cultural Technology” has imbued music with a new formula to enter into the strange new ordering of power.

A reality TV star is running for President, incomprehensibly huge and widening gaps form between the super rich and the super poor in our cities whose airports screen suspect foreigners so diligently in waiting areas in order to protect the interior from terrorists, who are driven insane by the violence of this culture in cells in other parts of the world. Global hegemony at its finest, consuming the very elements of culture that may counter it and spitting them out as a manifestation of its own power in the face of any opposing system. The military has consumed and internalized American music; art has become the military’s pulsing lifeblood.

And yet we can dance to the same music in our homes as is used in torture chambers and it still feels like art or entertainment. Is this a sonic manifestation of the increasing distance between image and reality? Has the military in fact corrupted and changed the nature of music? Are we dancing to a tool of war?

It seems to me as though K-Pop manifests something that could be experienced as hegemony’s art, an expression of the system; torture music manifests hegemony’s violence, a corruption of the music that could or could not have been in alignment with the system and its forced inclusion.

Just throw everything into my guidance

Even if your overwhelmed heart was to explode

Even if it all flies away in the wind

Right now, this moment, the world is yours

ATHENA WASHBURN B’18 is charged with global appeal.