Walking to Not Forget

The Changing Place of HIV/AIDS Activism in Rhode Island 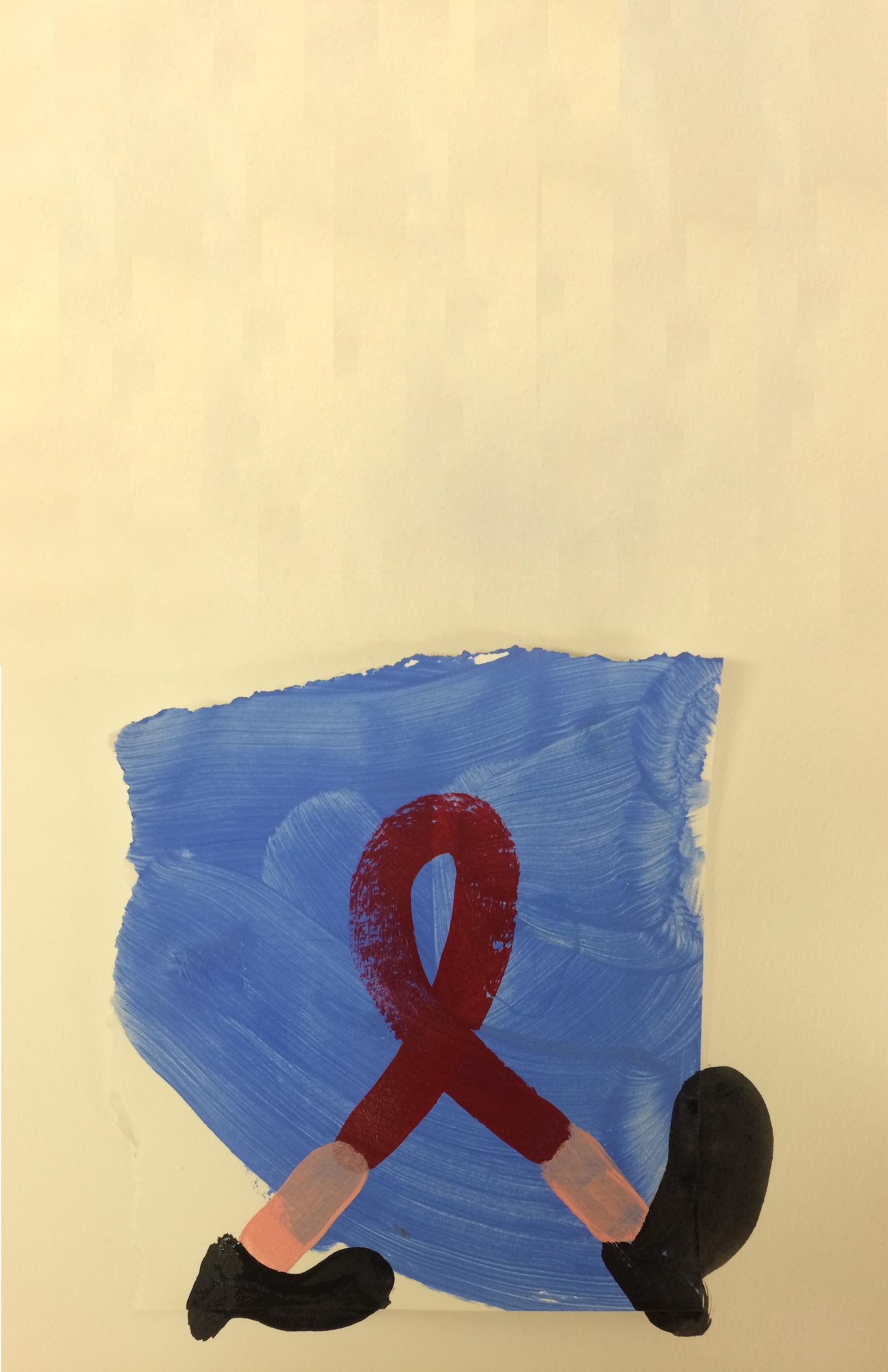 Blocks away from the State House, Usher’s “Yeah” reverberates through the empty streets. The day is grey and wet, but I soon find myself amidst a group of people chatting convivially under arches of red balloons. The atmosphere is strangely celebratory. People seem almost elated to be here, reconnecting with old friends and handing out colorful t-shirts. I ask one of the volunteers why she has chosen to come to the event, but it’s hard to make out what she says over the booming pop medley coming from the speakers.

September 13 marked the 30th AIDS walk in Rhode Island, an event to raise funds for and awareness of those living with HIV/AIDS in the Rhode Island community and the nation. The AIDS walk, which happens annually, takes the form of a 2.5-mile loop through the city starting and ending at the State House. Maybe it’s simply a sign of its old age, but the urgency of the event appears to be mostly gone. This year’s theme: “keeping hope alive!”

“We are here to continue to fight,” began Mayor Jorge Elorza, who was one of many speakers at the event. Before Elorza’s speech, Steve Hourahan, the director of AIDS Project Rhode Island, lauded the Mayor for his support of the fight against HIV/AIDS in Providence as well as of the LGBTQ community. Elorza’s speech followed many of the expected arcs. He emphasized the need to find a cure, but also to educate the community in order to prevent the spread of the virus. Citing the fact that over one million Americans and 33 million people worldwide are living with HIV/AIDS, Elorza finished: “this is a call to action.” He was met with tepid applause.

Seth Magaziner, the General Treasurer of the State of Rhode Island, offered a more nuanced look at the unique state of HIV/AIDS activism in the contemporary moment. “30 years ago, doing this was a revolutionary act,” he said, looking out over a crowd filled with college-aged students, young children, and seasoned veterans. Indeed, there was nothing visibly revolutionary about the participants of the AIDS Walk. And this is perhaps part of why it felt so strange to be there. Everyone seemed so­—normal.

In past decades, HIV/AIDS awareness has been assimilated into mainstream consciousness. Whereas HIV/AIDS activism in the 80s and 90s was linked to marginalized communities and radical politics, such activism today lacks an expressly revolutionary thrust. In a recent n+1 article, AIDS activist and writer Emily Bass defines the transition between these two periods as the “footnote years.” “It was an era in which HIV/AIDS activism began winning remarkable victories in the global arena, and the era in which the HIV/AIDS and LGBTQ agendas cleaved apart,” writes Bass. Indeed, HIV/AIDS is no longer just an LGBTQ issue; it is a global one. The fight against AIDS has been institutionalized, driven by organizations like the Center for Disease Control or the World Health Organization rather than a small group of vocal and frustrated queer-identifying urban youths. Formalized initiatives have replaced the radical LGBTQ-inflected actions of previous AIDS activist groups like ACT UP. Rather than blocking bridges, today’s HIV/AIDS activists line up politely to have their photos taken next to the State House.

These kinds of shifts are accompanied by the changing nature of what is necessary for contemporary HIV/AIDS activism. Magaziner stressed that awareness isn’t the biggest challenge that HIV/AIDS activism faces today; complacency is. And this notion gets at the crux of what it means to be an HIV/AIDS activist today, when the disease has been so thoroughly normalized that it is no longer widely viewed as a pressing issue. The entire event seemed to be a kind of nudge towards remembrance. “Don’t forget about us,” it seemed to insist. And now is certainly not the time to forget. With cases of HIV on the rise in Rhode Island, there is perhaps no more important moment for HIV/AIDS activism in the state. Yet the question of who is rendered visible or invisible in this activism remains a pressing though generally unaddressed issue. Indeed, this “us” is still not an all-inclusive one, often leaving out the very communities that are most affected by the virus.

Dr. Philip Chan, an HIV/AIDS specialist working at the Miriam Hospital, and Dr. Nicole Alexander-Scott, the new director of the RI Department of Health, offered more tangible steps for addressing the spread of HIV/AIDS in Rhode Island. Both doctors addressed the need for increased testing as well as more widespread education about Pre-exposure prophylaxis (PrEP). PrEP is a daily pill that acts as a preventative measure against the transmission of HIV. “PrEP has been shown to reduce the risk of HIV infection in people who are at high risk by up to 92%,” according to the Center for Disease Control. Some studies have even found success rates as high as 99%. Yet while PrEP is a material example of the progress that has been made since the onset of the epidemic, it offers even more fodder for our disregard. “We cannot grow complacent,” asserted Alexander-Scott.

Both Chan and Alexander-Scott also addressed the need to focus on communities that are disproportionately affected by the disease, specifically youth, communities of color, and men who have sex with men. But despite all the talk of devastation, it was hard to fathom the destructive force of the virus. Save for the occasional commemorative quilt or t-shirt, obvious signs of those whose lives were ravaged by HIV/AIDS were largely absent.

Absent too were the voices of some of these disproportionately affected communities that have been largely overlooked in the activism surrounding the virus. HIV/AIDS is an intersectional issue. It affects a variety of communities and thus necessitates a similarly diverse response. This message stood at the core of a speech given by Ronald Lewis, a Providence-based artist and HIV/AIDS activist who is vocal about his HIV-positive status. Lewis’ speech was undoubtedly the most compelling of the event. His message departed slightly from the more formulaic and teleological calls to action vocalized by his predecessors, instead emphasizing the need for intersectionality in HIV/AIDS activism. Often viewed strictly as an LGBTQ issue, HIV/AIDS has, in the process, ignored the lives of other communities, specifically people of color. While people of color make up about 30% of the population, they represent 65% of new HIV infections in Rhode Island. “One can’t talk about HIV in people of color without talking about the history of racism,” said Lewis, who stressed the need for anti-racist and LGBTQ activists to work together. He then quoted the feminist writer Audre Lorde, who famously declared, “There is no such thing as a single-issue struggle because we do not live single-issue lives.” Lewis gestured towards a much deeper problem facing those infected with HIV/AIDS, and indeed with the current state of HIV/AIDS activism. The fact that the communities who are most disproportionately susceptible to contracting the virus are also the ones who are excluded from much of the discourse on HIV/AIDS is a problem that cannot be addressed simply by finding a medical cure. Lewis’ proposed solution to this deep structural problem, however, echoed what had already been said over and over again that day: “We must embrace community.”

As the tents were slowly being disassembled after the walk, I began a conversation with a representative from the Community Care Alliance, an organization that provides support for HIV-positive inhabitants of northern Rhode Island. When I asked her about the necessity for collaboration, she visibly perked up. “You have to collaborate. This is not something you can tackle on your own,” she said. Soon she began enumerating the other organizations with which the Community Care Alliance has worked, but was not able to finish her list because of an old friend and collaborator who was walking by. “Just a second,” she said, running to give her friend a hug.

The community of HIV/AIDS activists in Rhode Island is a tight one. And while there is still much space for it to grow and many more voices for it to include, its message nonetheless reverberates throughout the state: “don’t forget about us,” it says again and again. Don’t forget about us.