Bodybuilding and the Muscular Dead-End 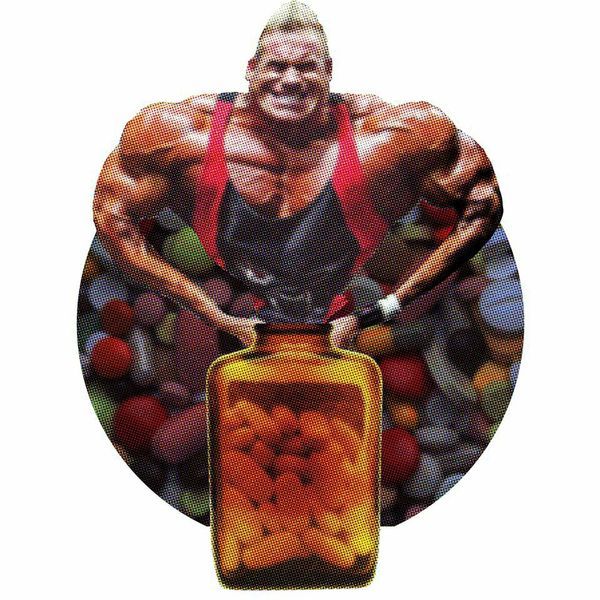 “This is unacceptable,” said Arnold Schwarzenegger, placing emphasis on all the wrong syllables. “We don’t want to see the biggest guy out there, we want to see the most beautiful man, the most athletic man out there on stage.”

At this year’s Arnold Classic—an annual ‘sporting’ festival that includes a bodybuilding portion—the competition’s namesake took to the stage to express his disgust at the immense physiques winning bodybuilding contests today. The seven-time Mr. Olympia, action film star, and politician claimed that these bodies were so big, they were no longer beautiful, no longer something to aspire to. “Look at the old days when Steeve Reeves won,” he urged the audience.” When Steeve Reeves won and you saw him on the beach, you’d say to yourself: ‘I would love to have this guy’s body.’ But that’s not what you can say about the guys today who win those competitions.”

Schwarzenegger criticized the builders’ thick necks, their distended guts—a telltale sign of human growth hormone use—and their generally poor proportions. But most of all he criticized the judges. “Let’s say I’m a judge... the question [would be]: ‘whose body do I want to have?’” He continued: “We have to make sure that we’re rewarding the right guys. Because if you reward the right guys, then everyone will start training to have a beautiful body again, rather than…” he paused and with a face of disgust added, “a power lifter’s body…” The audience erupted in applause and laughter.

This remarkable speech went thoroughly unremarked in the media—an unsurprising outcome given bodybuilding’s steady decline from public view since Ahnuld’s time, due to its failure to produce another figure of his stature. Yet, if we ignore the fact that it was Schwarzenegger and his peers who began this literal arms race in the first place, and his use of the word “athletic” to describe these bodies—what’s the athletic component of bodybuilding, exactly? The carefully choreographed posing? The preening? The fake-tanning?—he has a point. Bodybuilders often invoke the language of sculpture to describe their physiques, but the professionals today have bodies Michelangelo could only dream up on hard drugs, locked away for months with a vacuum pump and a few copies of Flex magazine. Since the introduction of steroids in the 70s, bodybuilding has become a battle for the biggest biceps, and it’s reached the point where the bodies hitting the stage are completely undesirable to the vast majority of people—and even, apparently, to Schwarzenegger. This is significant not just for the subculture and its ardent followers, but, I would argue, for regular men. Though extreme and disgusting to some, bodybuilders aren’t separate from regular men; they’re simply the extreme end of the same muscular spectrum, the eerie conclusion of the widespread push in recent decades towards an increasingly muscular body, a sign that perhaps this muscle madness has gone too far.

But first, let’s backtrack a little. If you’re unfamiliar with bodybuilding, this whole spiel probably seems ridiculous. I imagine you were tripped up by Schwarzenegger’s assertion that the physiques winning bodybuilding competitions were or could ever be aspirational or “beautiful.” If this is the case, I’d encourage you to Google Charles Atlas, who was dubbed “The World’s Most Perfectly Developed Man” by Physical Culture magazine in the 20s, and whose physique managed to sell thousands of copies of his mail-order fitness regime. In the 50s, there was Steve Reeves, the bodybuilder-turned-film star who, at the peak of his career, was the highest paid actor in Europe.

Then along came deca and Dianabol—the most popular anabolic steroids of the 60s and 70s—and, with them, a bigger, buffer, and previously unfathomable physique. At his peak, Schwarzenegger had pecs roughly the size of his own head and a chest that appeared to have been inflated with a bike pump. He was so lean that his skin, thin as Bible paper, looked like it’d been shrink-wrapped to his frame. In 1977, Schwarzenegger admitted to anabolic steroid use, claiming that he only used the drugs for the 8–10 weeks before a competition. Schwarzenegger started the arms race, but it’s gone far further than he could ever have imagined. Thanks to a smorgasbord of more recent drugs (like insulin and human growth hormone), the so-called ‘mass monsters’ winning competitions today are so muscular and have such little body fat that they’re practically a different species. At 6’2” Schwarzenegger hit the stage weighing around 220 pounds, from 1970–1975. From 1999–2005, eight-time Mr. Olympia Ronnie Coleman had a listed height of 5’10” but often entered competitions weighing 295 pounds. Jay Cutler, Coleman’s successor, was equally massive; at only 5’7”, he consistently weighed upwards of 270 pounds. These numbers translate into very different physiques. As Schwarzenegger less-than-flatteringly put it: “It used to be that you used to have a V-shaped body, now, I dunno, it’s kind of like a bottle-shaped body, or something.” Former bodybuilder Sam Fussell put it more delicately, in an email to me: “Now, [the top bodybuilders] look like Humvees and Transformers. In my day, they looked like Ferraris and Lamborghinis. A question of taste.”

Taste is central here, as despite the existence of clear criteria (bodybuilders are awarded points for their symmetry, proportionality, and level of muscularity), the judging process is ultimately subjective. In Schwarzenegger’s day, judges consistently rewarded men with so-called Apollonian proportions—that is, neck, calves, and biceps of the same circumference, and a chest twice the size of one thigh. Today, they seem to reward pure size. Why they do this is unclear, but the result is that while the most muscular bodies of the 50s were also (to many) the most desirable bodies, the most muscular bodies today are completely undesirable to most people and, more importantly, unattainable without serious chemical assistance. Yet—and here’s the catch—these bodies have an impact on the average guy’s understanding of muscularity.

“Not everyone wants to look like Arnold Schwarzenegger, but they don’t want to look 70 percent less muscular than Arnold Schwarzenegger,” said psychiatrist and body image researcher Roberto Olivardia, when I asked him whether or not bodybuilding had an impact on the rest of the world. “If the bar keeps raising in terms of how muscular somebody can get, it eventually starts to trickle down. It really does.”

By “it,” he means not just the desire for muscles, but steroid use. “Early on, anabolic steroids were confined to bodybuilding circles, then they started to trickle down to other sports, like baseball and football. Now, many athletes are doing it for performance enhancing purposes, but we also know that the main variable in anabolic steroid use is body image dissatisfaction.” (It’s been estimated that over one million Americans have used anabolic steroids for image enhancing purposes.) “Fitness models, film stars...everyone’s taking them.”

Models, actors, and others simply take far fewer steroids than bodybuilders, and often different compounds (e.g. they might cycle testosterone, but not insulin or HGH). The result is a physique that is less extreme than a bodybuilder’s, but more appealing to the average guy. These men are what Olivardia calls “politely ‘roided”—that is “they’re taking enough steroids to lose fat and gain muscle but not enough to look like they’re taking them.” And this is precisely the problem.

For the economic benefit of supplement companies and fitness models, and for the social kudos afforded to buff film stars and regular guys, performanceor appearance-enhancing drugs are never even mentioned. Instead, steroid-fed fitness models smile for cameras, nursing tubs of creatine that were in no way responsible for their growth. Fitness magazines devote double-page spreads to the grueling workouts and draconian diets of actors in the lead-up to major roles, conveniently failing to mention the steroid cycles that were also a part of the preparation. Even more laughable is the coverage of the Mr. Olympia contest, in which inhumanly large men compete to be named the best bodybuilder in the world. Much is said about the competitors’ twice-daily training sessions, 7000-calorie diets, and posing routines; little mention is made of the truckloads of chemicals that make this amount of training and muscle-building possible. Men are led to believe that they’re a few kettlebell swings and skinless chicken breasts away from their ideal physique.

The question then follows: is Schwarzenegger right? If those on the extreme end of the muscular spectrum (bodybuilders) are undesirable, and if the bodies men are exposed to in magazines and films exceed natural limits, have we reached an aspirational dead-end? As it stands, many men are either striving for the impossible or attaining it with the help of chemicals. The meaning of muscles—as a symbol of hard work, discipline, a high pain threshold—has altered immensely. This leaves me wondering: what’s even the point anymore?

Bodybuilding once purported to offer the world the ideal version of man. Today bodybuilders offer a sort of hyper-reality, existing at the extreme end of the spectrum. The gains in terms of muscularity and vascularity have been immense, but, I would argue, with more than a million American men diagnosed with muscle dysmorphia and many more with morphed perceptions of their own musculatiry, there have been some large losses for many men.