VOICES ON THE GROUND

A Conversation with Amy Goodman 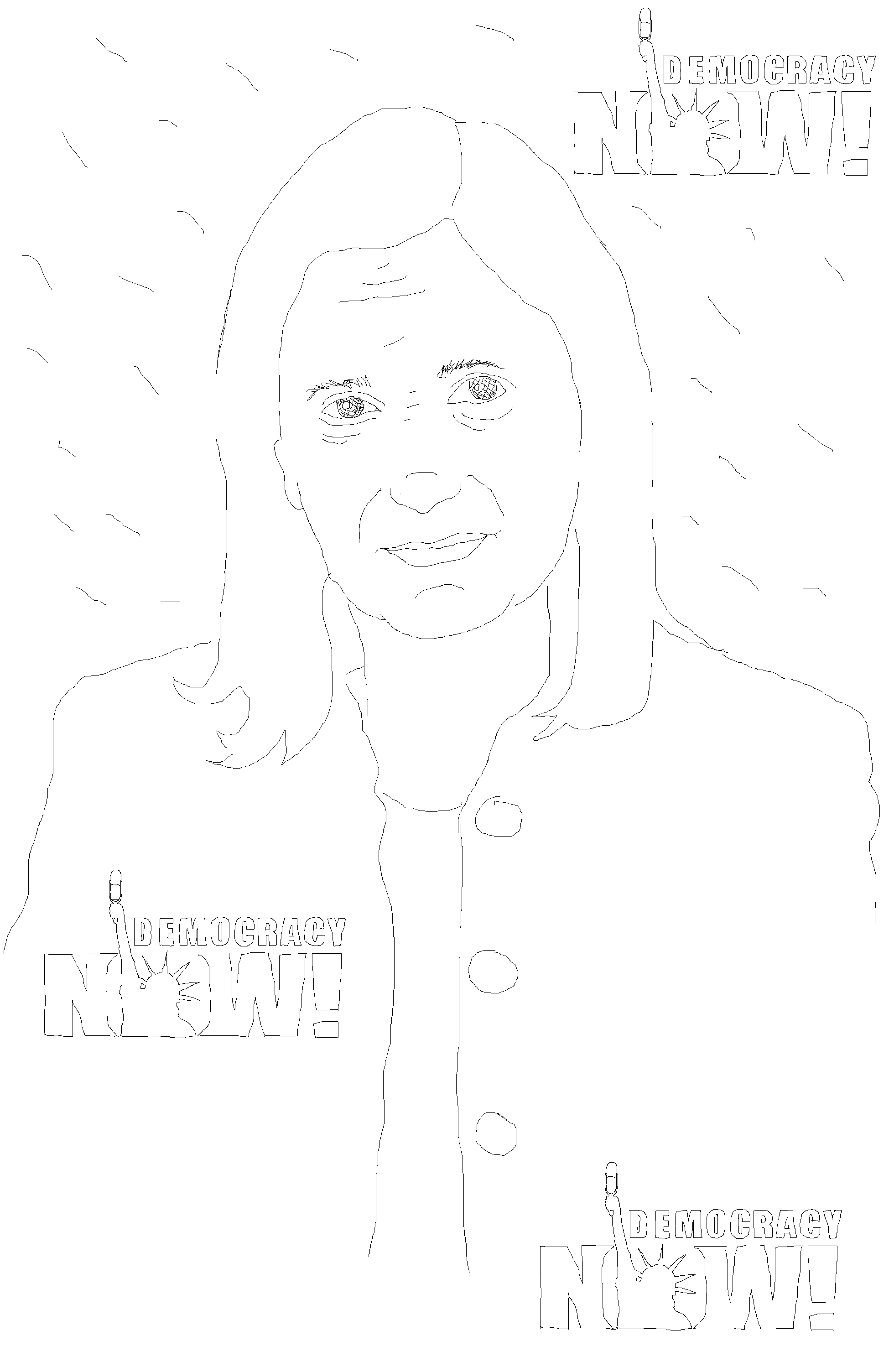 Amy Goodman is perhaps better at asking questions than anyone else in the media. Goodman is founder and primary host of Democracy Now!, an independent daily news hour broadcast on over 1,200 radio and television channels, as well as online. She once drove then-President Clinton to an angry outburst after a round of intense questioning during a call Clinton made to her show during the 2000 election; he was seeking to simply tell listeners to vote. She has received the Robert F. Kennedy Prize in International Reporting, the George Polk Award, The Islamic Community Award for Journalism, and the Right Livelihood Award, among others. We talked over the phone; my questions centered on new media forms, but Goodman consistently brought up specific policy issues from a broad range of current and past events, occasionally leaving the original question topic behind. It was a telling indicator of her brand of journalism, which is focused on the content of what different voices, especially those ignored by the corporate media, have to say. Throughout our conversation it was to these voices that we inevitably returned.

The College Hill Independent: People have been talking about the ways in which social media sites, like Reddit or Twitter, have the potential to democratize news and the way information is produced and consumed by the public. What do you think about that idea?

Amy Goodman: I think it’s very important that we get news from many different sources. In the past there were the traditional gatekeepers, so we heard so often from a minority elite. Now, we can choose many more ways to get information, and judge for ourselves how reliable that information is. So many newspapers have closed, for example, and I don’t think it’s just because of the Internet. I think that for a long time they brought us just a very narrow selection of voices that were very much representing a corporate establishment, like in Washington.

The range between Democrats and Republicans is often very narrow. When it came to the war in Iraq in 2003, Democrats joined with Republicans in authorizing the war, and you had the newspapers largely coming out for war, when what we needed was to hear from people across the political spectrum, across the globe. When we wage war in places like Iraq and Afghanistan, what about hearing from people at the target end of our weapons? That’s who you hear from least. For example, when it comes to drone strikes now, the government will tell us this many 'militants' have died, or this many 'terrorists' have died. Well, how do we know who they are? Studies are coming out of New York University, of Stanford University, talking about how the vast majority of those killed are civilians. As the great muckraking journalist I.F. Stone said, “If you’re going to remember two words, remember these: governments lie.”

The Indy: Immediately following the Boston bombing, there was a Reddit community who thought they had identified the culprit, but they were wrong. Do you think when the media is in the hands of the public that there is the potential, not for intentional lies, but for misinformation?

AG: Well, there always is. But that’s also true with the mainstream media, and that’s often been the case. Let’s look at the example of weapons of mass destruction. You had the media repeating the lies of the administration saying Iraq had weapons of mass destruction—it wasn’t true. If you look at how people felt at the time in the US, I would say about half the people were for going to war. The US would go to war about six weeks later, March 19, 2003, so this was a critical time when the public was evaluating what was true. That’s when the media has to bring out the greatest diversity of opinion. The group [Fairness and Accuracy in Reporting] did a study of the four major nightly newscasts at the time—that was NBC Nightly News, ABC World News, CBS Evening News, and the PBS News Hour. There were 393 interviews done around the war—this was a time when half the population was for war, half against—393 interviews done around the war, and guess how many were done with peace leaders? Three, three of almost 400. That’s no longer a mainstream media, that’s an extreme media beating the drums for war. I think the important thing is to broaden the discussion. But, as you point out, the Internet can be a global rumor mill. It doesn’t mean you just believe anything that you read. We have to be extremely critical, but we also need a media that is separate from the government. We need a media that covers the movements that create static and make history, really bringing out the voices of people on the ground describing their own experiences. That’s also where the establishment media has failed us for so long—look at Ferguson, look at Occupy. We need to go beyond the establishment spokespeople, and there’s where I think a more decentralized media comes in. But you can’t accept anything at face value, and yes, there are going to be mistakes made.

The Indy: One thing I’ve heard discussed in regard to protest movements in Ferguson and New York is the way certain narratives or histories are simplified by activist movements, to create effective calls to action. What do you think about the relationship between the narratives that activist movements present, and more rigorous attention to detail, and whether those can be in harmony with each other?

AG: Well, I think it’s our job as journalists to go to where the silence is. So often protestors are expressing a reality on the ground, and that has been very important in pushing these stories forward. If people hadn’t protested—that is the only reason the justice department moved into Ferguson. In the case of Ferguson, the corporate media did come out, and they reported on the militarization of police. But they only came out because of the mass protest that was happening. This is a much bigger and very important story, the militarization of the police of the United States well beyond Ferguson. At Democracy Now! we have high school classes come all the time to watch the broadcast, and if it’s a class of African Americans, almost everyone raises their hands if you ask if they’ve been stopped by police. If you have a class of white high school students, rarely do they raise their hands. We live in different worlds, and we need a media that reflects those different worlds, and provides a platform for people to speak to each other. I see the media as a huge kitchen table that stretches across the globe, that we all sit around and debate and discuss the most important issues of the day—war and peace, life and death—and anything less than that is a disservice to a democratic society.

The Indy: As Democracy Now! grows and has more resources you are able to reach a broader audience. But I wonder if, with this growth, it’s becoming more difficult to stay independent.

AG: That is our mission, to be independent, to be a truly independent news cast, to interview people who are closest to the story. Once the range of options are presented, people can make up their own minds. We very much respect the consumers of news. The stakes are so high right now. Today on Democracy Now! our first segment after the headlines was about the massive drought in California. Governor Brown is mandating a 25 percent decrease in use of water, although not touching the main corporate growers, the main users of water in California. It’s an extreme situation. The media has so far ignored or covered up this issue—it’s not even climate change, it's climate chaos. Climate change is the perfect story to illustrate how captured the media is by corporations and a government that is very much beholden to corporations and the fossil fuel industry. Increasingly people tune in to radio and television just to get the weather because it becomes increasingly extreme. And instead of just flashing those two words, “severe weather,” what about flashing climate change, climate chaos, global warming. These are meteorologists. They should be telling us the connection between drought in California, the extreme cold in the north east, the forest fires of Colorado, as well as the floods. People aren’t stupid, but these are very disparate weather events—what connects them? That’s what a responsible media would be talking about. The rest of the world has major debates around climate change. Not ‘does it exist,’ but ‘what can we do about it?’ And in this country the networks are very much captured by the oil industry. When you look at the money that swamps politics, politicians aren’t going to raise a red flag around this.

The media covers the range of opinions between the Democrats and the Republicans, but the range of public opinion in this country goes far beyond that. I really don’t think that those who care about war and peace, those who care about climate change, about the growing disparity between rich and poor in this country are a fringe minority. Not even a silent majority. But there is a silenced majority; they are silenced by the corporate media. We are now larger than most network news shows. Certainly than those on MSNBC or CNN. So I would say that you cannot describe the typical consumer of Democracy Now! I think that conservative and liberal lines are breaking down. The kind of log jam that you get in Washington, and that’s reflected on the networks, isn’t the way most people operate in the world. I think Democracy Now! has definitely broken the sound barrier and addressed issues that are not typically just one group of people’s concern or another's.