The History of Life on Earth

The Work and Life of Elizabeth Fulda 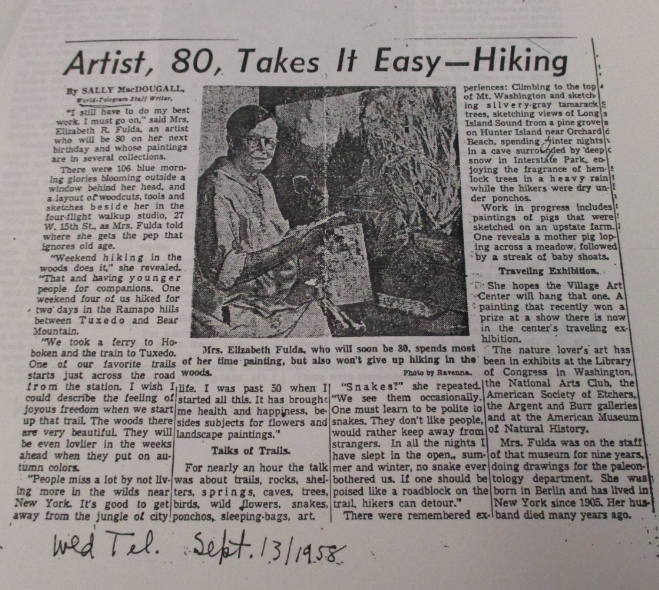 The American Museum of Natural History keeps detailed records. The museum, founded in 1869, was an early pioneer in bureaucratic management, and their paper trail is extensive. The archived documents include pieces of scrap paper with meeting times, telegrams confirming mail deliveries, and birthday party invitations between curators. The museum took meticulous photographs both of finished displays and of the staff’s work process. Glossy prints capture scientists piecing together unmatched fossil bones in their studios and school children pressed against glass-walled taxidermy displays in the cavernous museum halls. On the back of many of these images is the same small note in faint pencil script: Photo taken by E. M. Fulda.

Elizabeth Fulda took photographs of curators at work, catalogued collections, and illustrated many of the scientists’ books. There is one small bronze statue still on display that is based off of her sketches. It is a figure of ancient camel species, collapsing into the dry sand in a desert draught. Their skeletons would then fossilize into these positions, and a few million years later, paleontologists would excavate their bones, and Fulda would reimagine the moments of their deaths in a small pencil drawing. Donna Haraway calls this Museum a sort of “Garden of Eden.” Grown-ups playing god. Among them, a young man named Theodore Roosevelt, who personally shot several of the specimens that still live in the exhibit cases.

This museum is full of ghosts.

I find her salary invoice from the summer of 1921. She sometimes has the middle initial “M” and sometimes “R.” I’m not sure why. Could she have gotten married? She doesn’t have an employment record among the personnel files.

I stand in the museum full of screaming children and tourists with wide lens cameras and it feels abandoned. Totally empty of the people who built these halls and worked in them at a time documented in black and white photographs and color illustrations. I can only see Fulda, through the blur of a long century, but she feels whole and warm against the hollow claps of flip-flops on polished marble floors.

I start watching for ghosts. I don’t really know what to look for.

In 1924, in the back corridors of the department of Mammology, Fulda photographs Paul Boltman preparing a mastodon specimen from India, but he does not look up.  He watches his tool and the surface of bone, excavated from dusty fields. According to Boltman’s colleague, the mastodon specimens from that expedition to India helped to illuminate “hitherto obscure problems of identity, affinity, and taxonomy” of the mastodon evolutionary timeline. After the shutter falls does he look up at her? Does she smile? Fulda gave her camera access to the back rooms of the museum. Few people (and even fewer women) could walk into the curators’ workshops. A century later, I need university letterhead for my laminated researcher’s card to look at these boxes of letters.

Good machines become invisible. Good cameras do not leave streaks. Historians of Science Lorraine Daston and Peter Galison believe “mechanical objectivity” emerged in the mid-nineteenth century. They argue that in this historical moment, scientists redefined the path to truth, and shifted objectivity from expertise to machines. Nineteenth century natural historians created composite illustrations of specimens, emphasizing their distinctive features by using brighter colors and magnifying proportions. Increasingly, scientists turned instead to photographs, which captured images of individual specimens with all of the idiosyncratic irregularities of a single bird alongside their confusing similarities to other species. This new development was distinct “in its methods (mechanical), its morals (restrained) and its metaphysics (individualized).”

After weeks of reading letters and invoices labeled by date, I find a manila folder with the residues of something that never happened. A series of hand-drawn sketches stacked in a folder entitled “The History of Life On Earth.” These too bear Fulda’s signature. In 1924, William Gregory and Charles Frick commissioned a vast mural with a budget of $50,000 (Fulda’s annual salary was a little over $2,000). They asked Fulda for a series of panels to climb along the walls of a grand staircase. Gregory categorized her audience as “intelligent people.”  Each step would take them forward in the historical timeline of the earth.  As far as I can tell, it was never made, and if it was it must have been destroyed at some point; I can’t find the staircase now. But it was planned, and Fulda made the initial sketches.

The first panel shows unnamed dinosaurs in a thunderstorm. In the second, skies still dark, two dinosaurs rip into the throat of a third. A bird watches. The viewer climbs. In the next set, the panels depict ocean corals; the violence subsides. Streaks indicate moving water. The viewer takes another step. A bird lands on a tree in the next panel. Below grazing animals watch slowly as the skies clear. The panel is still crowded with clouds, but now with a break of light. Herds of ancient camels walk toward the horizon. A mother nuzzles her young to keep moving. In the final panels, the dark clouds clear and the sky glows. A bird spreads its wings, about to take flight. The viewer climbs another stair and sees structures, people with drums. Spears. Something that looks like Stonehenge. We reach the Paleolithic era. A castle. One more step up to the third floor of the staircase. The last panel shows galaxy nebula. We catapult into the edge of space and time. We stand on the top landing.

Ghost stories are imagined, or real, or imagined real.

Fulda’s designs for the mural on the “History of Life on Earth” told a story of progress, of literal enlightenment, of increasingly complicated physical and social structures. But most of Fulda’s work toed the line between the real and imagined. When she did substitute a camera to draw by hand, it wasn’t quite anachronistic, but almost. She used mounted skeletons to reproduce the animals in two dimensions, imagining the surrounding landscape. Imagining that staircase that never was, I fold the sketches, each feather-light, careful that my clumsy movement doesn’t send them flying to the carpet floor.

The museum archivists nod when I ask about Fulda, knowing my question before I ask. They then shake their heads. I have made friends with historians by remembering together the unanswered question we have both asked in that same room. I know more about those historians, decades my senior and strangers again after a brief meeting, than I know about our mutual imaginary friend haunting the archive.

Despite the stories, ghost can be seen in broad daylight.

In the Progressive Era, the increasingly professionalized field of scientific illustration offered an avenue for women to become involved in institutional natural history. The Assistant Director of the Natural History Museum at the time, Wayne Faunce, said that one of Fulda’s “completed series of figures would be of greatest usefulness to scientists the world over.” Mostly, Fulda did what Historian of Science Ruth Cowan calls “invisible labor.” Cowan uses this construction to describe women’s work in twentieth century suburbia (think: washing machines, microwaves). Instead of the split-level home and the sacred sanctum of the post-war family, Fulda worked in the hallways and stairwells of the grandest scientific cathedral of New York City. I find no evidence of whether she wrote letters in the evenings, if she had a family, or where she washed her laundry. Instead, the parts of her life visible to me now are those assembled from the few documents she shed as she worked; swept into the archives by custodians of history. She was, at moments, seen. She shone. In her days as museummaker, Fulda was an expert, handling fossils that visitors could never touch. Roy Andrews, a museum curator, wrote to the museum President to recommend Fulda to the task of making watercolor restorations of “Mongolian beasts” as a gift from the American Museum to the Chinese Government.  He wrote of her “unusual training and aptitude.” Faunce boasted that “few people other than Mrs. Fulda can do this work at all.” And yet, in this letter, Faunce was writing a request to the city to fund the rest of the work through Roosevelt’s Temporary Emergency Relief Administration (TERA) intended to combat the unemployment epidemic. So the Museum, one of the most powerful institutions in New York City, honored her work and claimed its international significance, but needed Roosevelt’s help to fund the rest of her projects. In the Museum budget, she only half-existed. Rinsing negatives and folding manuscripts with love. I wonder if TERA agreed to the grant request.

Ghosts gaze. I stare back. I wonder if I am afraid.

Fulda worked with Charles Knight—a prominent muralist for the museum, trained first as a portrait painter for Manhattan elite. When the museum commissioned Knight to design a mural for the Dinosaur Hall in 1925, he insisted on using only his own assistants, refusing to work with Fulda. “I am sorry to say that this would be quite out of the question,” he said curtly in a letter to Henry Fairfield Osborn, the museum president. He wrote, “I don’t like to see this Museum employ such very mediocre talent… her drawings [are] ... wholly unscientific and without life… Mrs. Fulda’s qualifications for the work are nil and her personality is so distasteful to me that even though she were ever so capable (which she decisively is not) I still would refuse to consider her for a moment.” Knight added, “This criticism is, I assure you, purely impersonal.” The director George Sherwood replied to Knight, “I trust that during the happy hours of your summer vacation you will plan out the future and will think out the best method of securing cooperation. In the past every great artist has had cooperation…” Every time I see one of Sherwood’s letters, he seems to be protecting someone or assuring them of their worth to the museum.

Ghosts can be forgotten.

A woman on the radio reminded me of an adage I had heard a long time ago. We die two deaths: one when our body ceases to fulfill the minimal mechanical requirements for functioning, and the other when the last person to remember our story also dies, and our name falls from the lips of the living. How dimensional can I make this woman? Enough to postpone the second death?

In a 1958 article in the World Telegraph, Elizabeth Fulda poses for a portrait. I had thought she posed in front of a window but when I look back at the article I realize she is next to a landscape painting—presumably her own. “Artist, 80, Takes it Easy,” the headline reads. “There were 106 blue morning glories blooming outside a window behind her head, and a layout of woodcuts, tools and sketches beside her in the four-flight walkup studio,” the staff writer for the Telegraph describes her private home. She holds a brush and a palette, limp in her hand. She looks away from the canvas, toward me but looking a little past my left shoulder, off the frame of the camera.