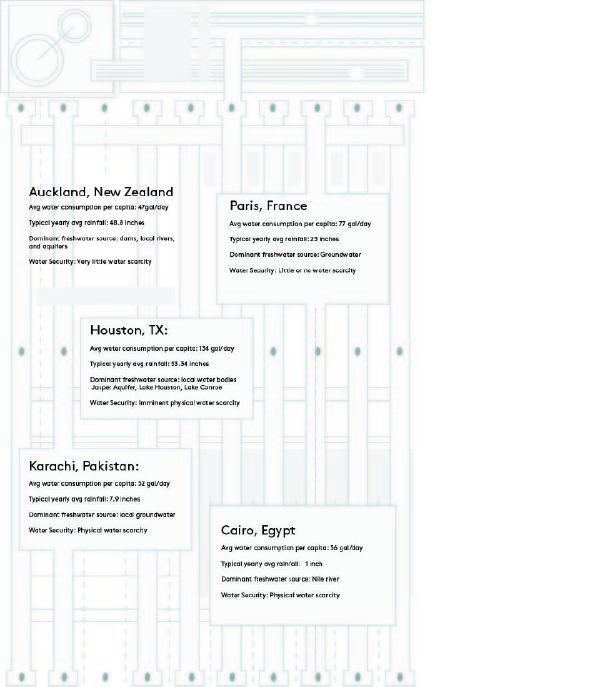 One day in late February, the taps that carry water to São Paolo’s 20 million residents suddenly went dry. The effects were not universal across the entire city; in the following days some areas saw sporadic hourly coverage while others had no running water for days in a row. Although the government tried to keep the public from panicking with promises of new reservoirs to be built, Brazil’s natural disaster monitoring service noted that the city’s main reservoir system could run dry by the end of the year. To most residents, the reality of their situation came as a total shock.

Home to 12 percent of the world’s freshwater supply, Brazil seemed an unlikely place for such a drastic crisis even though it has suffered from high temperatures and lower-than-usual rainfall over the last year. But as the world gears up for the 2016 Olympics in Rio de Janiero, residents of Brazil’s largest city are reckoning with an unprecedented, but perhaps not surprising, drought. Large-scale deforestation since the 1980s has increased erosion and runoff and destroyed the wetland that typically stored rainwater for release into reservoirs. These effects, combined with high temperatures, low rainfall, and mismanagement and overuse of available water sources, have led to the drought that stretches across central and southeast Brazil. Now, a month after the initial shock, scattered rainfall has provided São Paolo’s reservoirs with a small but much-needed boost. But the water levels still hover at 13 percent capacity—far too close to depletion to sustain a large population for long. Water coverage has resumed, although in most areas the water only comes on for a few hours a day or the available amount has been cut almost in half. The government’s poor handling of water resources leading up to and during the drought has convinced many residents to consider moving elsewhere in search of a more stable water supply. As surreal as it has been for residents and concerned onlookers around the world, São Paolo’s predicament is a test run for how other cities and even nations might handle future water scarcity on a large scale.

Closer to home, California is confronting a growing water crisis of its own. In the last month or so, reports of overdrawn reservoirs and nearly empty riverbeds have exploded across state and national news outlets. A NASA satellite monitoring program set up in 2002 has observed a continuous decline in California’s water storage, and groundwater depletion has been happening steadily since the beginning of the 20th century. Now in its fourth year of drought, California has about three years of water left for immediate use if it conserves well. Californians use roughly 150 gallons of water per day, which is low for the United States but more than twice as much as the average for the rest of the world. While the drought is currently in a chronic state, it has been in the making for quite some time.

As with most drought situations, industrial and private use of water has stayed constant or increased while groundwater reservoirs are tapped for water that should be used decades in the future. Much of the increased demand is due to food production. The process of irrigation used in most agricultural operations is wasteful, with a little more than half of the water lost to leaky pipes and evaporation into the air before it actually reaches the crops. This, combined with the fact that about 80 percent of California’s water goes to agriculture, means that most of the water is being lost in ways that renders it impossible for re-use in our lifetimes.

It’s also important to note that even though drought is a problem that is affecting the entire region, low-income communities—which are often made up of immigrants and people of color—are still being hit the hardest. The lawns of sprawling estates in Beverly Hills are still green, but in many small, working-class towns across California residents have been forced in recent months to rely on emergency bottled water handouts from local churches or come up with the thousands of dollars needed to have a deeper well drilled near their homes.

Only 2.5 percent all of earth’s water is freshwater (most of which is frozen into the polar ice caps or melting into the ocean), while about 97.5 percent is the saltwater that makes up the oceans and brackish water bodies like deltas. Rainfall is a key factor in maintaining these precious freshwater supplies, because in many places lower-than-normal rainfall means the area’s reservoir simply won’t have as much water for the months ahead. Over short periods of time rainfall irregularities tend to even themselves out. However, it’s when longer-term changes occur that rain scarcity can become a problem.

Aquifers, the most common source of the water that humans use to supply our wells, exemplify the difficulties we face in an increasingly erratic weather and climate system. An aquifer is an underground layer of rock, gravel, sand, or silt that is permeable enough to allow water to pass through. Aquifers are typically supplied through rainwater or melted snow that trickles between the spaces in loose soil or sand at the surface, and down to the rock layers underneath. This water is called groundwater, and tends to fill the spaces between the rocks that make up the aquifer as well as the pores within each individual rock. You can think of an aquifer as a sponge. As it travels into the earth, the water is moved through the rocks because of gravity’s pull and the weight of the water above. This constant motion results in surprisingly well-filtered water. But, because aquifers are often the result of thousands of years of water accumulation, natural replenishing processes cannot offset our fast-paced consumption in any meaningful way. Once it’s gone, it’s gone for a while.

According to the UN World Water Development Report, over the next 20 years the average supply of water per person will drop by roughly 30 percent. The coming scarcity is due in large part to the combination of low or nonexistent rainfall, warming temperatures, and deforestation or agricultural expansion that further increases water use while decreasing the earth’s ability to replenish.

However, even with regions across the globe facing eventual water scarcity, there are places where peak water consumption—after which water use overtakes replenishment—has yet to happen. In many developing nations, there are areas with sizable water reserves waiting to be tapped because there is no infrastructure in place that can move the water to the people who need it. In Turkana County, a poor, arid region of Northern Kenya that suffers from frequent droughts, only 44 percent of people had access to safe water in 2012. Many were forced to rely on water from a local lake even though the high fluoride levels made it unhealthy for consumption. Then, in late 2012, an exploratory drilling expedition found two previously-unknown aquifers whose combined volume of 250 billion cubic meters could provide Kenya with enough water to last an estimated 70 years.

The potential for widespread water shortage or uncertainty might seem bleak, but there are ways to temper future crises and save what water we have left. Currently, the vast majority (on average, 70 percent) of water in agricultural areas like California and the rice-producing regions of China, Cambodia, and India goes to irrigation and livestock care. So, one of the clearest (though perhaps not simplest) ways to address local water resource allocation is to reduce the farming of water-intensive crops, especially in drought-prone regions. For example, it takes almost 5 gallons of water to produce one walnut and 3.3 for one tomato—these among a number of thirsty crops grown in California’s water-poor climate. The situation is similar in places like Rwanda, which produces a large amount of the world’s cocoa beans despite its dry climate. As part of efforts to address these issues, food scientists and biochemists are hard at work engineering ever-more drought-resistant, high-yield crops that can feed our cravings with fewer resources.

The single biggest impact, though, might be made by seriously reducing meat production and consumption. While the Western world is currently the largest market for meat, demand is constantly growing as burgeoning middle classes in developing nations consume more meat more often—often in parts of the world traditionally not used to heavy meat intake. Between the cow’s water needs and the water it takes to grow its feed, your bacon cheeseburger requires much more water than you probably realize: almost 1,500 gallons just for the meat. As of yet this suggestion has remained largely unpopular, especially in the meat-loving US of A. But there might come a day when McDonalds are forced to use veggie burgers or meat substitutes in the beloved quarter-pounder with cheese. Still, regardless of how such lifestyle changes are received by the public, one thing is clear: changes in our collective water supply are here to stay.

CAMERA FORD B’16 is holding out for a McFalafel.