In the Hall of Mirrors

Fernando Pessoa was the author who tried to write the author out of writing. His works were published under 70-plus heteronyms, of which he said: “I don’t know, of course, if they didn’t really exist or if it is me who doesn’t exist.  On such matters, as in all others, one shouldn’t be dogmatic.”

To fill in the gaps: he was the Joyce of Lisbon, flâneur of city streets better known by a score of pen names than by Pessoa, which simply means “person” in Portuguese. He worked by day as a freelance correspondence translator for over 21 firms throughout his lifetime, often two or three at the same time. He struggled to conceive of himself as one author, believing that subjectivity is by nature dispersed among many. As a writer, he rejected traditional forms of authorship. He allowed his literary personas to replace and rewrite the man behind them. In that sense, his writing cannot be reduced to one origin or truth. This irreducible multiplicity is shared by the hyper-textual medium of the Internet today, where information is decentralized and personal identity often dispersed. Just as there is no “real” Pessoa, the originators of what we find online are not understood to be authors in the traditional sense (they are, in fact, often plagiarizers). In anachronistic reverie, the modern reader—the fanatic few—can imagine the potential of Pessoa’s web presence: a cross-referencing zig-zag of Tumblr, Twitter, and Facebook accounts that never will be. His accounts of Lisbon are as myriad and intersecting as his personas, leaving one of the most overlooked and under-translated literary legacies of the 20th century.

Pessoa in the Mirror: Heteronyms

It may seem like Pessoa just couldn’t stop changing his profile picture. But it was deeper: he was up late one night scribbling at his desk and he experienced sheer and unexpected inspiration. He began to write things, wild things he could not have written under his own name, and signed them Alberto Caeiro. One of Pessoa’s three most important heteronyms was born. In contrast to his other personas, Caeiro is completely unconcerned with the metaphysical. For him, a stone is just a stone. All is surface in the world; there are no hidden meanings. His work stems not from an emotional connection to his surroundings, but rather from a total absence of sentiment. He is considered artless, an anti-poet, and thus the perfect foil for Pessoa’s true literary problematic: a deep-seated artistic and metaphysical uncertainty. 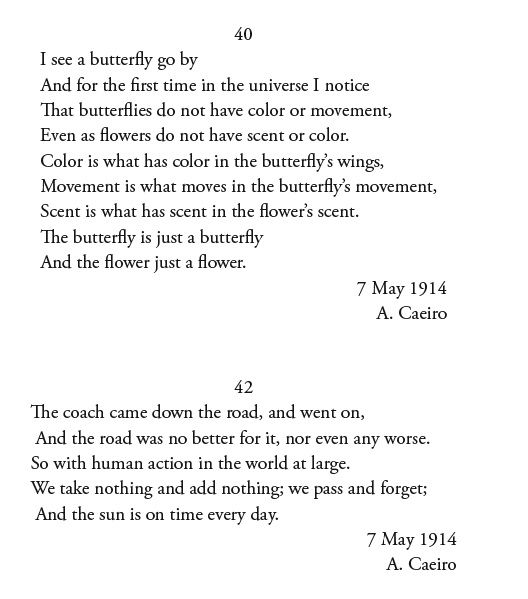 Pessoa’s metaphysical concern is fleshed out in the works of Álvaro de Campos and Ricardo Reis, two particularly vivid heteronyms. Pessoa describes Campos in a letter to Adolfo Casais Monteiro on January 13, 1935: “Álvaro de Campos is tall (1.75 meters tall, two centimeters more than I), thin, with a tendency to a slight stoop…between fair and swarthy, a vaguely Jewish Portuguese type, hair therefore smooth and normally parted on the side, monocled.” Reis has “vague dull brown [hair]…a bit, though very slightly, shorter (than Caeiro).” Although each of his heteronyms has a distinct appearance, temperament, and writing style, these remain two of his most complex. They incarnate Pessoa’s idea of the heteronym, defined in the field of linguistics as two or more words spelled identically but with different sounds and meanings. Take for example tear, which means both “rip” and “liquid from the eye.” The second definition of heteronym offers a slightly different take­; two or more words that are used to refer to identical things in different geographical areas of a speech community, such as sub, hoagie, and grinder. Finally, the third definition; each of two words having the same meaning but derived from unrelated sources, such as preface and foreword. Curiously, Pessoa’s use of the word heteronym encompasses all three meanings. His idea of heteronym as a multitude of personas springing from the same mind reflects of the word’s definition.

During his life, many of these literary personas were not known to be Pessoa. Literary critics studied the oeuvres of the best known. Contemporary novelists admired their work. Publications of the time even documented their personal lives with avid curiosity and speculation. In 1986, half a century after Pessoa’s death, Ricardo Reis became the main character of José Saramago’s Nobel Prize winning novel The Year of the Death of Ricardo Reis. In his acceptance speech, Saramago described his early fascination with the poetry of Reis, whom he took to be a real Portuguese poet. Some observers, such as Antonio Tabucchi, one of Reis’ foremost critics and translators, believed Reis to have died peacefully in exile toward the end of 1935. Others speculated that Reis mysteriously passed away in Lisbon a year later, an unwitting casualty of revolts that spilled over into Lisbon from the Spanish Civil War.

The Theater of Himself

Pessoa actively cultivated these personas. He wrote for a wide array of publications in Lisbon at the time and would manufacture literary criticism of the work of his heteronyms. In a book supposedly written by Frederico Reis, Ricardo Reis’ brother, he writes, “The whole philosophy behind the work of Ricardo Reis can be summed up as sad Epicurism.” (The Sad Epicurism of R. Reis) Today we’d call this “self-plagiarism” or even “academic dishonesty,” if he was even able to keep the game up at all. Real or not, these heteronyms stand out vividly in literary memory. For readers, it is sometimes impossible to distinguish the real man from his heteronyms. For Pessoa, the boundary between self and other was often completely erased. On several occasions he claims to have seen his face in the mirror fading out and being replaced by that of a bearded man.

When he wrote, it felt like being owned by something outside of himself, as if his right arm were lifted by a curious sensation. The practice of automatic writing fascinated him. He said, “It seemed to me that I, the creator of it all, was the least thing there. It is as if it all happened independently of me.” This sense of the occult and the spiritual occupied him throughout his life. He had astral visions and saw himself as a medium. He saw himself not as the origin of his works but as “the empty stage where various actors act out various plays” (The Book of Disquiet, tr. 1991). In various ways, his work dispersed the idea of assuming one origin or source of inspiration. Pessoa asserts, “To create I have destroyed myself.” He plays with the idea of cryptomnesia (later explored in Borges’ Pierre Menard, Author of Quixote), in which one experiences a memory as if it were a new inspiration. What is heard or overheard by the subject is mistaken for an original thought.

My own discovery of Pessoa was just such an instance of unoriginality. I remember searching his name on Wikipedia in a flash of what I thought was revelation. I later realized that I had heard his name in a French radio emission I wasn’t paying very close attention to.

An online project called “Pessoa’s trunk” is dedicated to “applying the tools of the Web” to an appreciation of Pessoa. When Pessoa died in 1935, he left behind a trunk containing some 25,426 items—a vast collection of poems, fragments, letters, and journals that had previously been attributed to his heteronyms. The site grapples with the linguistic and material dilemma surrounding its namesake— how to convert Pessoa’s fragmented requiem into a readable medium. One page displays his poem “Autopsicografia” so that three of thirteen translations can be read simultaneously. Is this triptych a new work—a study in translation?

And who is the author of this website, the translator of Pessoa to the Internet? The bottom of the webpage ambiguously reads, “Special thanks to Dr. José Blanco, Pessoa “supplier” / This site is a subset of Disquiet.com.” What does it mean to be a Pessoa “supplier”? Am I one?

It’s hard to know how if one can get an accurate sense of Pessoa’s writing from translation. As a friend who speaks Portuguese pointed out to me, I can’t get the “real” experience of his writing without reading the original. But is the Portuguese material even original? His verses seem to have already undergone the most drastic translation, that of his mind to the page, to a tangible object of reality. This proved a lifelong struggle for Pessoa: reconciling his experience of the world with its reality, here addressed in his chef d’oeuvre, written under the name Álvaro de Campos: 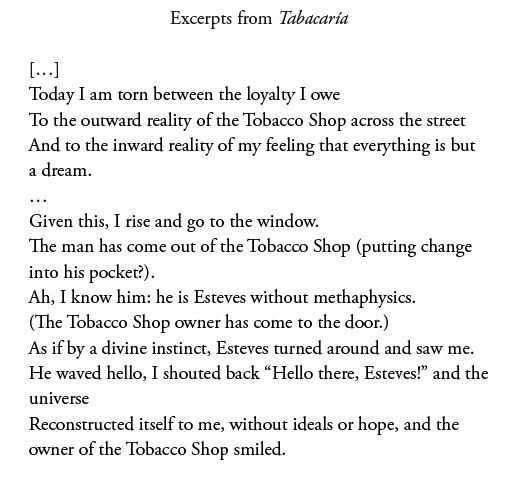 VERA CAROTHERS B’14 stems from a total absence of sentiment.