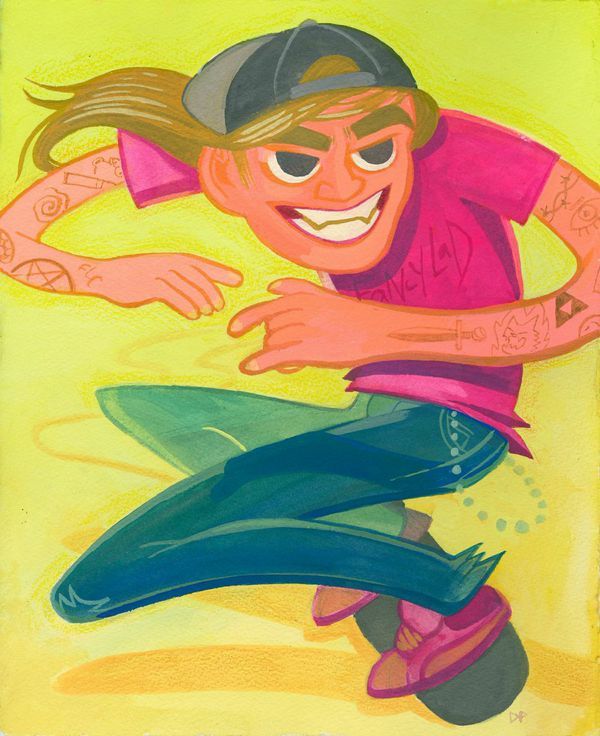 “We use chaos as a gateway to the unknown creating a new path. Nothing that can be measured by skill or talent, that of which we have very little of. Our path is forged by passion and ingenuity. In a world full of sportsmen, here stand a few real dudes; has-beens and never was nobodies, modern day skate jesters ready to withstand humility and simultaneously glory. Fulfilling our position in the universe. The clever opposition to the standard of mass appeal. A truly creative skateboarding company that everyone can relate to…one for the skate nerd inside us all.”

So reads the mission statement of Fancy Lad Skateboards, a Boston-based skateboarding company whose recently released video “Fancy Lad 3” has shaken neither the skate world nor the art world. Started by Nick “Big” Murray and Colin Fiske (of PJ Ladd’s Wonderful Horrible Life fame), the Lads have been living in Matt Roman’s far-from-fancy mansion wreaking havoc for the past three odd years, existing on the fringe of skateboarding culture, which is itself situated on the fringe of the day-job-going, family-minded, Good Samaritan ideal that so dominates the American imagination. Skateboarding is still less than a generation old, but much has happened during the evolution of the skateboard from a simple toy, used by children and land-locked surfers to a multifaceted tool used by ‘skaters’ of all sorts, in all corners of the globe.

Multiple declines and renaissances have already left their mark on skateboarding’s history; massive corporations like Nike, McDonald’s, Pepsi Co., and Adidas have nudged there way into the skate industry, concomitantly strengthening, threatening, and ultimately transforming the skateboarding community; the Internet, especially platforms like YouTube and Instagram, have revolutionized the way skateboarding is shared and performed. Today, in part because skateboarding is such a young activity, its history exists all at once: (most) of the pioneers of the 70s, 80s, and 90s are still alive and shredding, right beside the contemporary generation of skateboarding legends and laypeople. The Lads occupy a unique position in this ahistorical skateboarding community, one of the few positions that radically challenges the culture of technical progress and competition that has dominated much of skateboarding over the past decade or so. Whilst firmly rooted in skateboarding history and current norms of skating, the Lads also question these norms and point towards an uncompromising return to the playfulness and freedom from which skateboarding was born, a return which resolves the climax and expiry of technical skating.

(Street) skateboarding is often viewed as an enacted critique of authority, namely the authority of capitalist ideology and the regulative, intrusive state, which together produce oft-oppressive cultural norms. Skateboarders move in, on, under, and around the structures in which these norms are writ physical. While skaters often skate despite its illegality, and not because of it, there is an untheorized critique tacit in the very act of skateboarding.

Even though the average skater is not thinking politically when he or (less commonly) she does a kickflip down a set of stairs—he or she is likely simply performing a physical activity that grants them a feeling of pleasure—we can read critical power into the skater’s action. Staircases, for instance, are structures that facilitate efficiency, in that they make for quicker movements from one place to another; organization, in that they suggest a route for people moving from place to place; and safety, in that there are handrails to assist their users and that they are often erected over uneven surfaces. Skateboarders invert all of these values by turning the stairs into a stage for superfluous activity, with no end other than itself; inefficiency, in that they do not move simply from point A to point B; and danger, because they risk injury with every trick they perform down the stairs. The act of skateboarding challenges all of the intended functions of the stairs, which, in spite of their seeming inconsequentiality, subtly influence and affirm particular values.

Of course, not all skateboarding takes place in the streets. Skate parks, for example, have rules of their own. They too can be seen as sites of education, perhaps even as slyer, subtler educational apparatuses because they front an illusion of critical activity while actually training and conditioning the skaters who use them to limit themselves to certain spaces and practices. Also, many skate parks are privately owned, for-profit enterprises, so the act of skateboarding in a park doubles as an economic transaction.

Over the past decade or so, a type of pacified, apolitical skateboarding has permeated the skate world; figures like Shane O’Neil and Shawn Malto—good guys, with a lot of publicity and big sponsors, skating with a clean, tech style—have stolen the spotlight from the party-hard, rebel image of a skateboarder, which developed through the 70s and 80s and thrived on a creative brand of destruction. But the wave of tech skating that has dominated much of skateboarding for the past decade has near reached its limits, and now faces a sort of existential crisis. The difference between David Gonzales grinding down a 25 set or 30 set no longer matters, and the insanity of Nyjah Huston’s parts flattens out into a sort of mind-numbing blur where every trick feels the same. We’ve reached the quantitative end of the road. 720 flips, dolphin flips, nollie tre bluntslides, massive rails, and other feats of technical mastery feel bloated and played out. They are, above all, un-relatable, and therefore not entertaining or engaging. It’s time for a return to style.

Videos like “Fancy Lad 3” herald such a return. The video reads as a synthesis of the playful, allusionary, Internet-art elements of NY-based crew and company Bronze and the joyfully free, creative skate-philosophy of Mark Gonzales, especially as realized in parts like his Video Days. The video blends clips from trash films (especially horror and sci-fi), Microsoft Paint-esque illustrations and aphorisms (“paradox aesthetic,” “unconventional arousal technique,” “fancy lad, the reason god created america,” “the video practically watches itself,” “I am a slave to my practice”), conventional skateboard tricks, numerous bails and sketchy tricks, and many unconventional permutations of skateboarding. The actual skateboarding in “Fancy Lad 3” is an (il)logical extension of the recent resurrection of “easy” tricks in skater’s vocabularies: wallrides and wallies are in; powerslides are cool again; impossibles are no longer a mere relic of Koston and Daewon’s youth; finally, it’s acceptable to do a varial flip on camera. To quote John Lucero, the famed inventor of the slappy and owner of Black Label Skateboards, “[skateboarding is] taking it back, I’d say one step back and two steps forward. We’ve been doing the same thing for so long, let’s do something different.” Fancy Lad takes this dictum and runs with it, de-educating skateboarding so as to breath into it new life.

By challenging the norms of an activity defined by challenging norms, Fancy Lad facilitates a return to traditional skate ethos in an activity that’s substantially different from its early incarnation. The Lads replicate skateboarding’s relationship to the world within the skateboarding world. As skateboarders take handrails and turn them into elements for rapid, risky motions, the Fancy Lads take tropes of skateboard films and use them to redefine and redirect a culture facing some dead-ends.

For example, it’s common practice to structure a skateboard video by individual “parts”; each skateboarder gets a two to five minute segment in which they showcase different tricks at particular spots. “Fancy Lad 3” is organized according to parts, but there are some parts by people who don’t even skateboard in a conventional sense. Mike Linquists’s entire part consists of shots of him lying down on a skateboard, rolling down hills, stairs, and other surfaces. The inclusion of these parts in a skateboarding video shows that skateboarding-proper has a limited perspective on what is and is not skateboarding; in fact, Linquists’ antics are very much a part of the activity of skateboarding, just as much as an Andrew Reynolds frontside flip or a local Providence kid, shredding the RISD ledges. Skateboarding reaches as far out as those who identify as skateboarders allow it to; the only requisites are wheels, wood, a world, and a human being in motion.

A moment passes in “Fancy Lad 3” when its significance crystallizes in an all-of-a-sudden and obvious kind of way: as a skater locks into a smooth, long crooks, he arrests your attention; it’s actually a good trick, certainly one of the few in the video. It’s a kind of disarming and surprising moment, and just as it washes over you, the shot cuts to something else, before seeing him pop out of the crooks. For a second you wonder if he lands the trick or not, before realizing that it doesn’t matter—that’s the magic of it. The clip recalls Ali Boulala’s ender in Flip’s “Sorry,” where he attempts and fails to ollie a massive 25-stair set. The convention, of course, is to end a video part with a “banger”—a trick that blows the audience away. Boulala instead offers us the anti-banger, a non-trick that still blows us away, and also is totally relatable and entertaining. There’s no respect or attention lost in Boulala’s apparent failure; likewise in Fancy Lad 3. The Fancy Lads decondition that expectation of something good, of getting a “trick,” or accomplishing something for external validation, and revive a sheer enjoyment in skateboarding.

The absence of a traditional, commercialized engagement with their audience might be to blame for the lack of attention the Lads have garnered from within and without the skate world. They do sell merchandise, but such enterprise is firmly secondary to their spiritual mission. Likewise, the audience is present in the Fancy Lads’ work, they create with intent to share, but it’s more of an open relationship, where readers are invited to participate, but by no means necessary for the creative acts to take place. On 16 pages of their blog, there are only seven comments. Thirty-five of their 46 videos on YouTube have less than 2,000 views. Moreover, the Lads show no sign of stopping their prolific output. The Fancy Lads lack an audience, and clearly do not give a fuck.

But perhaps a more apt description of the Lads’ attitudes would be “giving not a fuck.” There is something positive in the Fancy Lad philosophy, something that “gives,” but gives nothing at all. They’re synthesizers, not reactionaries, taking elements of skateboarding, brand language, airs of political significance, and strange filmic productions and creating something that’s simply worth creating. Elements like movie clips, resituated in a Fancy Lad context, make one wonder how on earth human beings decide to rally the money, motivation, and organization to make such crap. This very feeling of wonder is extremely redemptive and affirmative, turning the trashiest, kitschiest little creations into sources of joy, and rendering the Fancy Lad’s own creations honest, worthy pieces of art, which are accessible to “the skate nerd inside us all,” and not just skate nerds.

ELI NEUMAN-HAMMOND B’18 is fucking ready for the snow to melt.