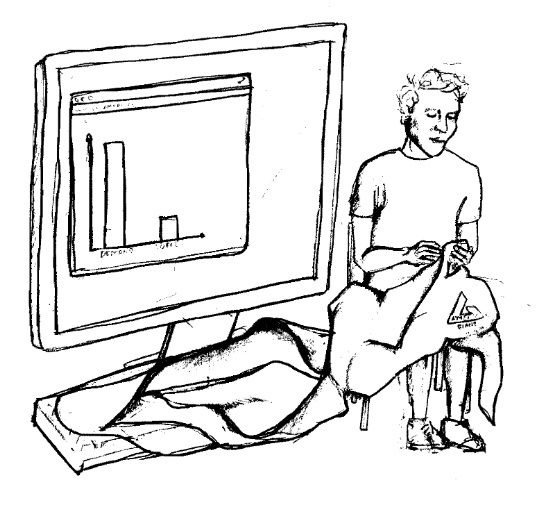 American Giant began with an epiphany. “People are tired of products made far away from home—they are looking to be more connected to the things they use every day and the people who make them,” founder and CEO Bayard Wintrhop explained to Esquire at American Giant’s launch.

American Giant makes hoodies. Based in San Francisco, Winthrop and Phillipe Manoux­the—the company’s creative director and a former Apple industrial design employee— collaborated on every detail to get their hoodie just right. They source all their materials from the United States and conduct all manufacturing in Milbrae, just south of San Francisco. Winthrop speaks about the benefits of keeping the manufacturing chain local in terms reminiscent of the locavore food movement. He knows where his fabrics come from and feels more comfortable with the final product as a result. If the problem is that most textile goods are too cheap and disposable to begin with, American Giant seeks to correct this by manufacturing durability. With a factory only fifteen minutes from headquarters, a shipment of fabric that comes in incorrect or a batch of hoodies frays too easily can be sent back quickly and for a minimal cost.

If you think this is beginning to sound like your typical trendy “Made-in-the-USA” apparel company, you’re not wrong. The fashion industry often uses domestic manufacturing as either a cover-up for poor quality goods or a way to make the consumer feel ethical and empowered. Ralph Lauren came under fire for outsourcing the manufacturing of the US Olympic uniforms, and Union Made, another San Francisco-based clothing label, was exposed by Gawker for selling goods that weren’t, in fact, union-made. But American Giant strays from the traditional mold of the made-in-the-USA gimmick. Rather than base their business strategy on what they recognize to be outdated models of supply chain and manufacturing, American Giant uses tactics traditionally employed by Silicon Valley startups: direct-to-consumer distribution, building brand image and fan loyalty, and the generation of hype through online write-ups. Despite this, American Giant still harbors nostalgia for an old American way of doing business where things are done correctly, not easily, and the brand uses that nostalgia to create a strong mythos around their product.

The consequences of running a company that sells physical goods in the manner of a startup that sells immaterial goods (apps, etc.) became clear this past December. American Giant received a write-up in Slate from tech writer Farhad Manjoo, who championed the American Giant hoodie as “the greatest sweatshirt known to man,” praising its texture, its fit, and build quality. Instantly, the company was flooded with orders, a half a million in two days. Manjoo reflected in a later article, “One of the promises of hosting your business on the Internet is that, thanks to viral marketing, you can become an overnight hit. For lots of Internet companies there’s little downside to instant success. If you sell software, your app can go from 10 users to 10 million overnight and, as long as you manage your servers well, you’ll be OK…If you make stuff that can’t scale at the speed of the social Web, instant demand might be more of a curse than a blessing.” One outraged commenter on Manjoo’s initial piece exclaims, “This company may in fact make the world’s best hoodie (I’ll judge for myself if mine ever comes), but they obviously completely suck at scaling up to meet the demand created by this article.”

American Giant’s meteoric ascent highlights a broad-stroke shift in the dynamics of the American Dream. Many years of applying a strong work ethic has morphed into cashing in overnight on a genius idea. The promise has changed: through hard work over a very concentrated period of time, you will become immensely successful, briefly. Mobility is no longer possible via a steady, consistent climb by the many, but rather only through a meteoric ascent by a select few.

Of course, the myth of the American Dream is just that. Today, the balance has shifted from the myth of work ethic to the myth of origin. This isn’t to say that origin myth is no longer important in America, but rather that the starting point is now more important than the climb. Apple started with Steve Jobs and Steve Wozniak in a basement. Facebook started in Mark Zuckerberg’s Harvard dorm room. America has always steeped itself in origin mythology, from the founding fathers to Henry Ford. These myths are cemented and reified through circulation in popular culture. What’s new here may not be the myth, but its application to a new type of figure—not the self-made hard-worker who climbed from the bottom but the self-made hard-worker who sat around waiting for the next big idea. And it goes beyond just the tech industry: when Drake raps, “Started from the bottom now we here,” he glosses over the (negligible) work it took to ascend. The origin story begins to dwarf the myth of work ethic by focusing on the two endpoints rather than the journey between them.

The necessity for an origin myth to span that gap has grown so strong that it’s essential now to create your own. This is perhaps why Bayard Winthrop sought out tech writers (and Farhad Manjoo in particular) to write an article on his hoodie. And even before Manjoo’s piece caused the company to blow up, previous press coverage had come equally from fashion publications (who focused on the company’s dedication to detail) and technology publications (who focused on the company’s business strategy). The press coverage and the enormous buzz generated by Manjoo have grounded American Giant’s origin myth, both explaining and obscuring how the company traveled from small-scale hoodie manufacturer to makers of one of the most in-demand hoodies currently on the market.

Now that American Giant has become giant, there’s an interesting paradox: if their application of direct-to-consumer business models to material goods is successful, it means that they can scale, grow and create more manufacturing jobs domestically. In other words, by following the path of ascent from nothing to everything, from lower class to upper class, American Giant seeks to restore middle class accessibility. Bayard Winthrop buys into this wholesale: “This idea that technological innovation is liberating the best of American manufacturing is a fascinating business idea, and it’s one that has me really optimistic about the American manufacturing sector looking forward.” Rather than manufacturing jobs for computer science majors straight out of college, American Giant aims to create jobs for American manual laborers.

Even there, however, this desire is shrouded in nostalgia. American Giant’s “About Us” page reads like this: “From seed to sewn, what we make and sell is the product of an old American work ethic and a new American way of doing business. So you can not only be proud of what you wear but be surprised at how well it’s made, how well it fits and the quality of how it feels. We cut no corners. We did this the hard way. We do things the right way.” At the core of American Giant’s philosophy is a tension between new American business strategies and old American work ethics. American Giant seeks to show that the two can successfully coexist.

But American Giant has yet to show that it can scale to meet its demand, and it’s still not clear that a $80 hoodie will ever be viable on a large scale. It’s also unclear how large American Giant’s operation can become, what types of laborers they will employ, or how much they can pay them. At the core of it all sits mythology: an initial boom that sustains a career of innovation. Even if American Giant fizzles, we know how it started.

TRISTAN RODMAN B’15 can make you a celebrity overnight.