Music in Your Feet 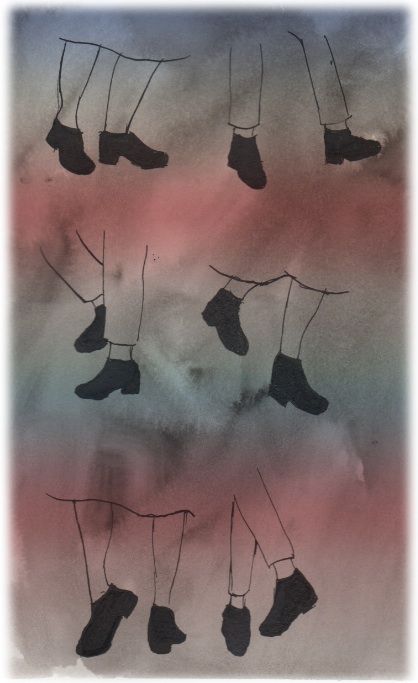 When the cattle are loaded up and the auctioneer retires, the livestock hall in Ripley, West Virginia takes on new life. In the summer gloaming, you can just make out the form of a pick-up truck as it rolls into the back lot. A door slams. Boots click. A roof note lingers as a fiddler plucks his string. Bodies disappear inside. What unfolds in the oxen pits and between the bleacher seats—loud and irreverent—is a three hundred year old tradition: clog dancing.

Born out of the folk dances brought to the Appalachian region from Scottish, Irish, English, and Dutch-German settlers in the early 1700s—and later influenced by Native Americans, African slaves, and Russian Gypsies—clog dancing, or “clogging,” is one of the oldest dance forms in the US. The clog itself looks more like a tap-shoe, with two “jingles”—flapping metal pieces—attached to the toe and heel. They create a percussive rhythm to a tune’s downbeat. I phoned up renowned instructor Jeff Driggs of West Virginia to get a better sense of the experience: “Once you get those on your feet you realize that you’re an instrument yourself and everything you do with you feet will make music…there’s almost a power to it. And you can go along with it, you can add to it, and you can change it. That’s the beauty of having that music in your feet.”

There’s nothing remotely connected about the way the upper and lower body move in clogging. Feet move intentionally, arms sway and pump loosely. When you take in the dancer’s entire figure, the overall effect of the movement is casual. But steps like “The Briar Patch” or “Steppin’ on a Snake” capture the urgency and precision of the clogger’s footwork. Clogging can be performed with shoes or without, “it doesn’t require costumes or a college education,” writer Angela Charlton explains. Its founders “danced to enjoy themselves, for a break from daily hardship…they weren’t concerned with standardized steps.” To the people of Appalachia, clogging still embodies the sound and movement of settlers’ newfound freedom upon immigrating to America. Clogging’s unique form reflects both their unique immigration story and deep ties to the American landscape.

Appalachia spans from northern Mississippi, Alabama, and Georgia to the Southern Tier of New York and is home to more than 23 million people. West Virginia is the only state to fall entirely within the region. The landscape of West Virginia is nearly impenetrable. The hills are tightly packed into a verdant wilderness, divided only by narrow river valleys—known locally as “hollers”—and a loose skein of mountain roads. The hills that aren’t sliced open and gutted for coal are so steep that, anthropologist Kathleen C. Stewart observes, “the sun shines down on them for only a few hours a day before passing over the next ridge.” The insides of mountains are still piled on the roadside—giant, smoking piles of black coal. Their oily discharge poses a constant threat to the surrounding creeks and waterbeds that vein across the backcountry. Trains run constantly; their metronomic whistle underlies the state’s slow and steady soundscape.

With its dense forests and bewildering mountain system, Appalachia’s foreboding landscape held off the westward expansion of British colonies for nearly a century. The few entry points into America’s interior, through the Hudson and Mohawk Valley (New York), and the Cumberland Water Gap (Tennessee, Kentucky, and Virginia) were well protected by powerful Iroquois, Creek, and Cherokee tribes. As a result, Appalachian frontiersmen of the early 18th century were fiercely independent, self-sufficient individuals. Far removed from civilization, the people of Appalachia developed their own way of life—one long-buffeted from change by the barrier of the Blue Ridge Mountains.

In West Virginia, the old adage goes, “you can take the man out of the mountains, but you can’t take the mountains out of the man.” With its powerful steps and free, interpretative form, clogging celebrates the history of its forbearers and the preservation of the mountain lifestyle. Smaller, more rural communities, which expert clogger Driggs claims “haven’t changed in a hundred years,” work hard to keep the tradition alive. As a child, Driggs remembers a community patriarch and famed mountain dancer, “D Ray,” picking up kids in the bed of his pick-up truck and taking them down to the local dance hall to teach them how to clog. “That’s just mountain culture,” Driggs explains.

Mass media has taken a toll on the freedom and individuality of clogging. Young cloggers have absorbed the structure and choreography of more popular dance, like hip-hop, into the old movements of the mountains. Now, young Appalachian women in sparkly t-shirs clog to Missy Elliot on Youtube. And while once practiced communally, clogging has found its way into the competitive dance world, dividing older and younger generations. The division isn’t necessarily lamentable, though. Grassroots clogging still has a place in Appalachia; you can hear it in the old dance halls of West Virginia on weekend nights. This new growth only continues a centuries-old pattern, in which the dance absorbs and blends the rhythms of diverse cultures to create something uniquely American.

GRIER STOCKMAN B’14 is a toe-tappin pistol packin’ hot mama.