Thoughts on the Past and Present of the What Cheer? City 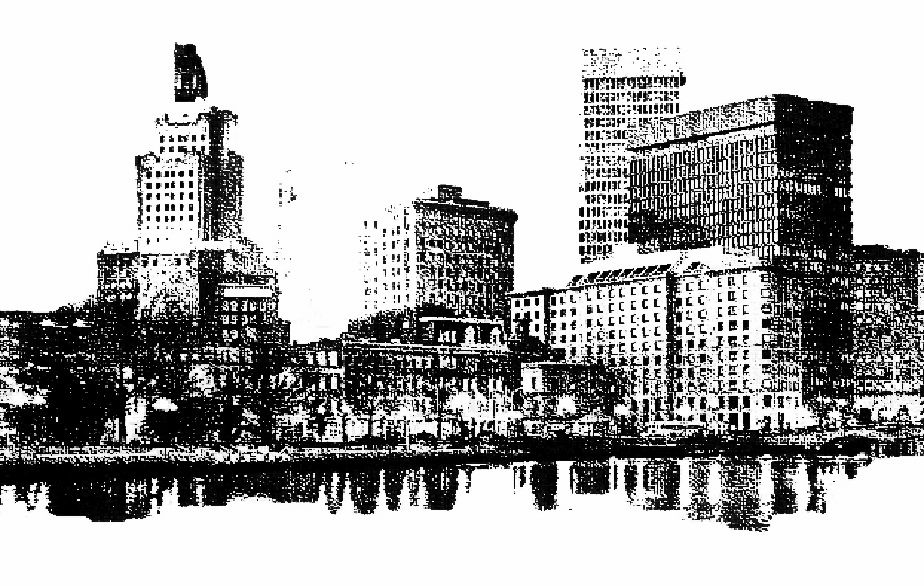 “We are no longer the industrial city we used to be; but that’s alright. We have to build the New Providence, along with a new economy, a new identity, and a new purpose,” said Major Jorge Elorza as he was sworn in last month. Governor Gina Raimondo echoed his sentiments in her inaugural address, speaking of an imminent “Rhode Island comeback.” Once the cradle of industry in the Americas, Providence is now a largely forgotten city, dwarfed by its neighbors Boston and New York, in addition to its own triumphant past. Providence’s tallest building—the affectionately monikered ‘Superman Building’—was built in 1928, and has stood empty for the past two years as a monument to Providence’s ever-fading economic presence. The city’s net population has increased by a mere 2,397 people since 1900—it rose by 78,000 early in the century, fell by 97,000 in the post-war decades, and finally recovered 21,000 in recent years—while most of the other large cities at the time have since grown by the thousands and millions. The state of Rhode Island is plagued by the fourth highest unemployment rate in the country and a massive deficit, which explains why people lack faith in Providence’s job market. Exodus only exacerbates the vicious cycle. Downtown Providence is suffused with a sense of waiting. Perhaps it’s the lack of big-city bustle; maybe it’s the absence of a subway system or heavy traffic. Whatever it is, one can’t escape this feeling that the whole place—the sidewalks, the gray slabs of brutalist structure, the eclectic old banks and hotels, the umpteen empty parking lots—has been like this for a long time, despite a sad list of efforts over the past few decades to rejuvenate the city.

How did Providence go from industrial hub to stagnant city? More importantly, where will the “Creative Capital” go next?

Providence’s founding story is haloed by mythos: Roger Williams, an ultra-tolerant rebel from Massachusetts Bay slips away in the middle of the night to found what will become Providence, a humble city defined by the moral resolution of its leader. Williams and a small cohort of likeminded settlers developed the land for farming purposes, took advantage of the Narragansett Bay’s natural resources, and subsisted on a meager economy of self-sufficiency. As the colony grew, it began a more substantial trade with other American colonies and other nations, and the city adopted an outward-oriented mercantilist economy. Concomitant with the city’s growth was its active involvement in the trans-Atlantic slave trade, which proliferated in the young city. One out of every six slaves brought to North America came through Rhode Island’s ports.

Towards the end of the eighteenth century, the wealthy abolitionist Moses Brown began to experiment with water powered cotton-spinning mills. At the time, Britain had a monopoly on cotton mill technology, and they vehemently protected trade secrets from eager outsiders: anyone with knowledge of cotton mill technology was prohibited from leaving the country. Nonetheless, certain enterprising Americans hoped to draw trade secrets from Europe by offering lucrative rewards to anyone who understood how British mills operated.

In 1790, Samuel Slater, a young British mill apprentice knowledgeable about the technology, heard of Moses Brown, and sought him out in Providence. Together they built the first American cotton mill just north of Providence and the Old Slater Mill, which still stands today. By 1809, Slater, Brown, and their associates had built almost 30 mills in the Blackstone Valley. Providence adapted well to the economic shift; its narrow, quick-running rivers were ideal for spinning mills. Traders invested in the industry, a robust domestic transportation network was built, banks sprung up to fund new projects, and people of all ages worked in the mills.

Providence flourished as an industrial city throughout the 19th century, and then rode the wave of demand for textiles and weapons created by World War I and II. Massive population growth accompanied the city’s rise as an industrial center: the population doubled between 1830 and 1865, then again between 1865 and 1880, and once more between 1880 and 1910, making it the twentieth largest city in the country. The city’s more than 1,000 manufacturing businesses provided almost 50,000 jobs for its citizens. Up sprung a vibrant working class culture, whose constituents ate out at all-night diners, travelled on the city’s electric trolley system, and purchased new mass-produced luxuries at myriad department stores. With the second highest wealth per capita in the country, Providence was prospering.

But around the middle of the twentieth century, something changed. Providence’s population peaked at 253,504 in 1940, and then plummeted by nearly 100,000 over the next four decades. Since then, growth has been sluggish, and the city is nowhere near its heyday size. The industrial economy that brought Providence to such heady heights now seemed to weigh it down in equal proportion. The culture, practice, and space of an industrial economy had become so engrained in Providence that when this culture reached its limit, the city failed to transition out of it.

For a while now Providence has floated on in a state of limbo, surviving and continuing to serve as a home and community for many, but without much of a role in a national or international context. The city, furthermore, is centerless, without any one locus of action or defining space. Downtown is in major ways oriented around consumption, rather than production, with institutions like the Providence Place Mall taking center stage.

Elorza envisages a coffee shop economy for Providence: young, hip people drinking lattes in and around the recently renamed ‘Knowledge District,’ thinking up the future of the world and turning their ideas into high-value, marketable technologies. A key element of this vision is the expansion of the “eds and meds” sector of the city, a nickname for the various colleges and hospitals. Rhode Island Hospital and Brown University already account for 10 percent of the jobs in the city, but need substantial growth to be anything near a saving grace for Providence. This gets into a few conflicting tensions: on the one hand, the city wants establishments like Brown University to expand, and (hopefully) bring new jobs and vitality into the city; on the other hand, the more that these establishments expand, the more of Providence’s property ends up in the hands of tax-exempt owners, which puts the city under even greater fiscal pressure. As it stands, 40 percent of the city is owned by non-profit—and therefore tax-exempt—institutions, a massive portion of the city’s tax base. Another thorn in the side of the ‘meds and eds’ plan is the annual flight of college graduates from the city: two out of three college grads leave Rhode Island after getting their degrees. Then who will buy all those lattes?

The plan to expand Providence’s knowledge economy goes in tandem with its rebranding as the “Creative Capital.” For years the many expansive and empty industrial spaces have provided cheap shelter to creators of all sorts, from painters to musicians. The ventures of creative citizens, in addition to contributing to the city’s economy, have the potential to make the city more attractive as a home and center of culture. Then again, they also have the potential to attract wealthy developers to working class communities, eager to cash in on ‘cool,’ diversifying neighborhoods. The unhappy result of this process, which begins with new people coming together, is all too often homogeneity.

Another barrier along the road from post-industrial wasteland to “Creative Capital” is the historically paltry support for the arts coming out of City Hall. This year the Rhode Island State Council On the Arts awarded only $140,000 to schools, organizations, community centers, and artists to promote their projects and practices. However, in the most recent elections voters approved a plan to borrow $35 million to fund arts and cultural organizations in the state. Hopefully the $23 million of this sum that will go to arts organizations will bolster Providence’s creative metamorphosis.

On the campaign trail, Elorza expressed particular optimism about reviving Providence’s seaport, a move that would reconnect Providence to its pre-industrial past. The Mayor believes that expanding Providence’s exports would create some 1,500 new jobs in the city. The port is one of two in New England with a depth of 40 feet, which gives it an advantage over shallower ports. Establishing more international connections would also engage Providence in a more global economic network. This, in addition to new direct flights between Providence and Germany, might help the city establish connections outside of the regional bubble. Also, these jobs would be an important counterbalance to the imagined jobs in the city’s technology sector; Providence is mostly a blue-collar community with a large immigrant population, and over-investment in an exclusive knowledge economy for tech-savvy college graduates risks alienating this job-deprived demographic.

It’s unclear what’s in store for Providence. It’s certainly due a change in direction, and if trust between the people and the powers that be can be mended, after years of unfulfilled promises and questionable investments, perhaps the government will be able to make big policy moves once more. And hopefully the people of Providence don’t get left behind in the process.

ELI NEUMAN-HAMMOND B’18 is a gray slab of brutalist architecture.