Take It as It Comes 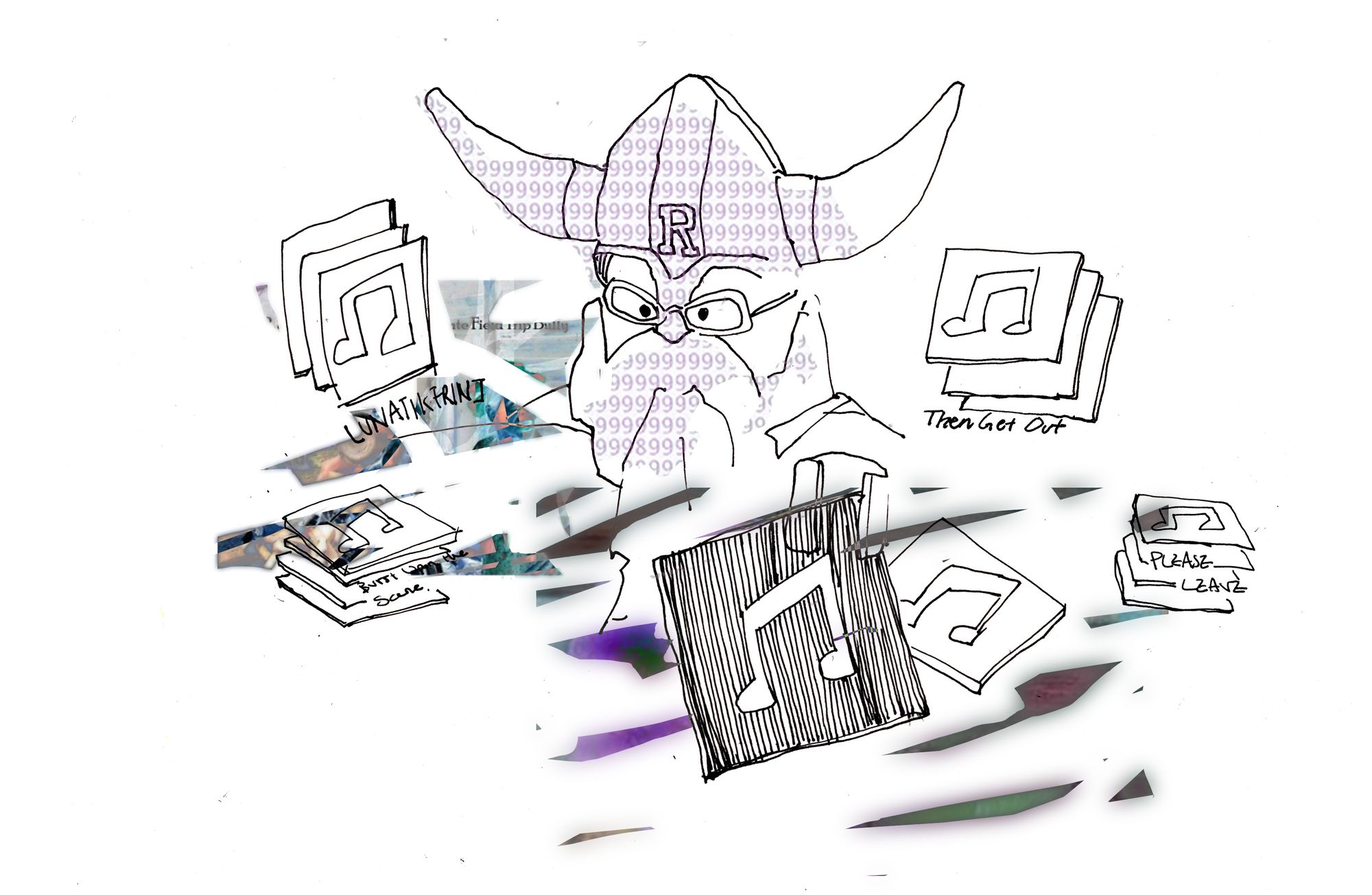 Before there were hipsters in faded t-shirts digging through garage sales for vintage tube amps, before kids swiped their grandparents record players to spin vinyl they bought at Urban Outfitters, before there was an Internet on which to have pissing contests about obscure bands, there was R. Stevie Moore.

R. Stevie Moore has been writing and recording music since 1968. He has released over 400 albums in his lifetime, making him one of the most prolific musicians of all time. When I emailed with him he mentioned he’s slowed with old age, even though he’s released eight albums this year alone: Lymph Nodes, Make It Be, Epiglottis Captcha Fracking, Spoiler Alert (RSD), May I Be Excused, Eloquence Arrogance & Innocence, MARISTEVIE MOORETON, and Seattle Party. And these aren’t your little eight-track indie LPs—Lymph Nodes, for instance, is 84 tracks long. The results of these albums are radically different—some contain garage rock pop, others intimate folk ballads, others spoken-word diatribes to politicians and some drum machines crudely overlaid with MIDI keyboards. A personal favorite is “I Still Want It” off Lymph Nodes, in which R. Stevie Moore’s booming voice describes the fingering of each of the chords he’s playing. His music seems to completely embrace the DIY ethos, even though he has been recording music since before punk rock even existed. In fact, R. Stevie Moore pioneered home recording when he self-produced his debut album Phonography in 1976.

But for years, his music received next to no recognition. His only contact with fans was through the occasional appearance on a local television show or the R. Stevie Moore Cassette Club, in which he hand packaged and mailed his home recordings and videos across the country. But recently his music has found an audience on the Internet. This new distribution network, combined with indie rock’s interest in lo-fi tones, has raised him to an odd throne of veneration. In 2005, The New York Times called him a “lo-fi legend.” In 2012 he made a record with Ariel Pink and went on his first tour, as far as Europe.

Why did it take so long for R. Stevie Moore to gain recognition? As one interviewee put it in I AM A GENIUS (AND THERE’S NOTHING I CAN DO ABOUT IT), the 2012 documentary about R. Stevie Moore’s life, “There was a time in the ’70s when no one knew how to write a song and play guitar. R. Stevie Moore was one of the few people who didn’t let that bother them.” Which isn’t to say that R. Stevie Moore is bad—in fact, if you dig through his discography, you can find some real gems. Some of them are even pop songs, the sort of thing I’d imagine on the front page of Pitchfork. The Vaccines covered one of them. But much of his work is the sort of thing that would bolt us awake if it came on in a sleeping playlist, that would tempt the boundaries of music and sound art.

“My religion is variety,” R. Stevie Moore told Pitchfork in 2012. “Lots of people like bad music.” And in spite of his ability to produce songs with widespread appeal, R. Stevie Moore is happy to indulge them. In fact, Jad Fair of the band Half-Japanese, a frequent collaborator of Moore’s, once said he thought that if R. Stevie Moore released one percent of the music he wrote he might have actually been famous. So why does R. Stevie Moore release bad music if he doesn’t have to? And furthermore, how does he find the energy to produce so much music in the face of what seems like failure? It’s easy to understand how the Beatles were able to release around 200 songs, surrounded by adoring fans and open-mouthed sycophants clamoring like seals for more, more, more – but how does R. Stevie Moore, of trifling acclaim, summon the energy to keep writing and producing without any of this positive feedback? By his own admission, he “follows his muse.” Is the difference between R. Stevie and the rest of us that he follows his muse blindly?

The College Hill Independent: Your discography contains more variety than maybe any other rock artist in history. What do you listen to, and who are your influences? Do you listen to as wide a variety as you play? How was what you’ve listened to changed over the years?

R. Stevie Moore: I listen to everything. Doesn’t everybody? Everyday is different, as is life. And since everything I listen to is influences, that might ultimately mean I have no influences. I listen to as wide a variety as I play. I don’t know how what I’ve listened to has changed, but I guess it has. Edison cylinders to Daft Punk. Exactly the same.

The Indy: When did you start recording music? What was the motivation?

RSM: As a boy with tape recorders, basic primitive finally progressing to songwriting and overdubbing. The motivation was to listen to playbacks. I like that, this is what I want to do here on out.

The Indy: How does your recording process differ from that of other artists?

RSM: I don’t record as much as I used to, so I kind of forget. Unsure how other artists’ processes go. There are so many step-by-step variables to arrive @ the final result, and no one method in particular is favored.

The Indy: Why do you think your music hasn’t received more recognition?

RSM: I have no answer to the q. Apathy and indifference curse, how’s that?

The Indy: Recent advances in recording technology mean that more people than ever can record at home. But at the same time, a lot of people in the lo-fi community argue that something is lost. I noticed, for instance, that you use Bandcamp to distribute your music, but most of your recording is done with older microphones. Do you feel that evolving technology is detrimental to lo-fi? Beneficiary? Both?

RSM: Something is lost by recording @ home? Or by being “lo-fi”? My cyber distribution avenues have nothing whatsoever to do with microphone style! Evolving technology is detrimentalbeneficiary.

The Indy: How have you adjusted to technology’s evolution over the past 46 years?

RSM: Simply by following it, as most musicians do.

The Indy: I have never seen the word “prolific” used so many times in my life than in reading about you. Why do you think your output is so much higher than other artists? Do you let ideas come to you, or do you find them through experimentation?

RSM: I followed my muse. Much more active in the ‘70s-‘90s than current times. Old ppl get slow. Ideas come from both extremes. Talent is an asset.

The Indy: Why do you choose to mostly record at home? Do you find it important to be more in control of the recording process?

RSM: I hate to say this, but... because I can. I don’t sit and decide to make a decision to record @ home instead of deciding to go out and do it somewhere else which isn’t my home.

The Indy: Do you feel it’s important to do live shows? Do you find you can engage effectively with your audience through just recording?

RSM: I have mixed feelings about gigging live, again, both extremes exist. For years I just did it solo, and seldom, but in the past 4 years I have finally had a badass Brooklyn band and have toured the world 5 times. Huge festivals and proper rock venues are glorious, smoky beer pubs or hipsterindie house shows are pretty dismal. Seems I need my band badly; otherwise “such wonderful music so poorly performed.”

The Indy: You’ve also created a large number of music videos of yourself, long before the days of MTV or YouTube. Were these videos released as part of your cassette club?

RSM: Videos were never “released” in the early days, not seriously. I offered homemade VHS compilations and then DVDs, for sale, mail order. But never much luck. MTV never aired my work, and I couldn’t even get play on underground cable shows etc. The internet changed everything, as internets do. I am my channel.

The Indy: Many bands see music videos just as a vehicle of promotion. Do you see them as something else? How do they complement your songs?

RSM: Moving visuals are by now a fairly essential element of experiencing songs, wouldn’t you say? They can serve many varied purposes, but they really don’t need any. They can enhance the music, or they can distract.

The Indy: You’re the son of the great Bob Moore, one of the best session bassists Nashville has ever seen. What did he think of your music?

The Indy: You once described working on music as a day job. Do you see music as a kind of day job like working in a grocery store, just a way of making a living? Your dad was a session musician—has that influenced your view of making music? Do you think there’s a kind of beauty to a daily job?

RSM: I said that? Well, I don’t work it like I once did. Permanent vaycay nowadays, semi-retirement.

The Indy: Why don’t you collaborate with other artists very often?

RSM: Total inaccuracy, that’s basically ALL I do anymore. The Indy: Have you ever thought about taking a break from music?

RSM: I do that all the time. Breaking, not thinking to.

The Indy: What’s the first thing you do when you’re handed a new instrument?

RSM: Doesn’t really mean that much to me, never been a gearhead, old or new. And I don’t thrill out by playing constantly.

The Indy: Why don’t you still do any work as a session musician?

RSM: No interest whatsoever in pursuing that avenue. That was briefly in the early ‘70s only.

The Indy: Is there anything else you’d like to say? RSM: Quite!

When I followed up with R. Stevie Moore, my first question was, of course, what was it that you wanted to say that you didn’t?