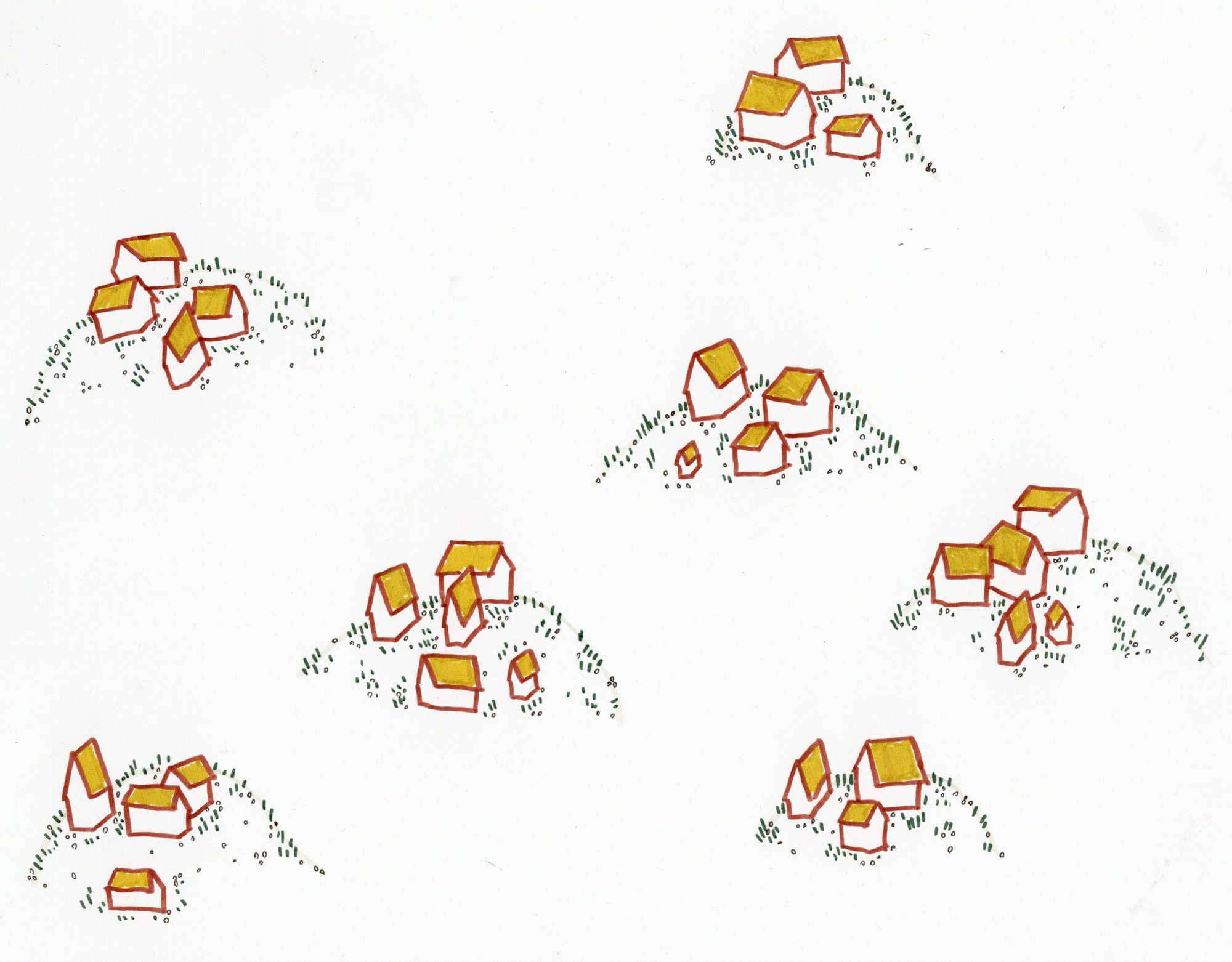 When Massachusetts exiled him for his radical religious beliefs in 1636, Roger Williams trekked south through an icy New England winter, reaching the Seekonk River as early spring thawed the riverbanks. Accompanied by Narraganset Sachems who lived along the bank of the Seekonk, Williams canoed down the river until it opened into a bay, which turned and narrowed back inland into the Great Salt River. Surveying the land he would soon claim as his colony, Williams docked his canoe in a tidewater cove between the slope of two hills.

Though the cove and surrounding land was marshy, the land beyond it seemed well-suited for Williams’s colonial vision, dipping and peaking into a series of hills. Some were steep and majestic, while others rolled gently, flattening into plains. Williams counted seven and drew boundary lines around their undulations.

Seven has always been a special number. For those who trust in the Christian Bible, it signifies perfection, completion. God rested on the seventh day.

And here is the mind which has wisdom. The seven heads are seven mountains, on which the woman sits (Revelation 17:9).

When Constantine built a new Rome in the center of his Empire, he chose to build it around seven hills. From the tops of each hill, Constantine could survey the rapidly growing city from above. He likely felt more powerful from atop a hill, elevated above his empire.

A city on a hill is visible from farther away than one built on low land. It is a beacon of God, civilization rising out of the wilderness.

Williams marked these lines on English maps then signed an agreement with the Narraganset who lived there, promising them English trading privileges in exchange for the parcel of land. Williams named the new city Providence, in gratitude for God’s divine guidance and care. It was to be a utopia, a beacon to outshine Boston, the city upon a hill that had exiled Williams for preaching religious tolerance.

Most of the earliest colonial houses in Providence were built east of the salt-water river, on a sturdy bank that rose into a sharp slope. Early residents named the slope Prospect Hill for its view over the surrounding land. Colonists leveled trees into roads, developing the forested hill into houses, taverns, and churches. The neighborhood looked over the flatter, swampier farmland west of the river. It was on the apex of this hill, removed and elevated above the rest of the city, that John Brown began to expand his university in 1770.

One of the hills west of the river, Weybosset, rose into a bluff where the river narrowed into a skinny neck, preventing inland roads from reaching the water. In 1724, Thomas Staples got approval from the city to begin dismantling the hill, carting off its rich clay to make bricks. Some of the leftover earth was packed into the marsh at the edge of the river to make flat, solid land.  Brick buildings were erected on Weybosset from the former hill’s clay innards. The city grew as men disassembled nature to suit their demands.

The Great Salt Cove shrunk and became land. The farms moved further away from the river, and the former swampland became Market Square, a growing city center. Wealthy inhabitants of Providence continued to build their houses on the firm incline of Prospect Hill, renamed College Hill. Poorer residents—lower-class whites and free blacks—rented rooms in poorly constructed clapboard houses mired in the soft former swampland, at the base of the hills. One of these neighborhoods, built at the edge of the shrinking Cove, came to be called Hardscrabble. In 1824, a white mob tore down several houses of black families, beginning a riot that destroyed the neighborhood.

Four of the white rioters were brought to trial. Joseph Tilinghast, the attorney who defended the ringleaders, closed his defense with scathing sarcasm: “The renowned city of Hard-scrabble lies buried in its magnificent ruins! Like the ancient Babylon it has fallen [...] and my client stands here charged with having invaded this cla sic ground and torn down its altars and its beautiful temples.”

The court appeared to agree with Tilinghast’s critique of Hardscrabble as disreputable and beneath the protection of law, finding only one of the defendants guilty. The houses were never rebuilt. Hardscrabble was not Babylon, Jerusalem, or Rome. It was never raised as a beacon of civilization and godliness. It was built instead in the gulf between the holy hills, on land that sank and stank of salt.

In 1838, the General Assembly constructed the first state prison on the low-lying land where Hardscrabble used to stand. Built of gray stone and ringed by fences, the prison was at the center of the city, visible from most high points. It sought to deter free citizens from crime and sin by making an example of those who had transgressed.

Soon after the prison was built, the Providence Railroad Company built a walled basin to contain the remains of the cove that lapped up on the prison grounds, shaping the uneven banks into a smooth ellipsis, ringed by a stone promenade. The railroad built the Union Passenger Depot around the southeast curve of the basin, laying tracks that stretched like rays away from the water.

Water was contained, land created, and new maps made. The surveyors stood on top of Prospect Hill to see the straight lines of the roads and railroads, to redraw the curve of the narrowing river. From above, the growing city became more comprehensible, as human-made patterns were superimposed on the irregularities of the land below.

On the eastern slope of Prospect Hill, where the city edged into the bay, rose a smaller hill: Tockwotton (Foxes) Hill. The area was wooded when Williams first explored it, and foxes reined its slopes. The Narraganset called the land Tockwotton: “that which is frozen.” By the 1800s, this frozen land had become the home of Providence’s growing Irish population. The streets were unpaved and the houses overcrowded. Residents dumped their waste in the brook that ran across the peak of the hill.

In 1869, a hurricane flooded the city and the contaminated brook overflowed, which prompted the city to tear down the hill—and the neighborhood atop it—to build a sewage system. Workers leveled the hill, tore down the houses, and hauled the earth to the eastern edge of the city, where they dumped it into the Seekonk. They flattened and moved the hill, laid roads on the packed, flat land and named it Gano Street. This new street was paved and sanitized, made into an emblem of the city’s progress towards industrial modernity. The brook became Brook Street, and new, expensive houses soon lined the paved road.

In 1891, the city commissioned a new state house, to be built on Smith Hill, which rose from the cove basin, above the ruins of the recently abandoned prison building. The new State House—a three-story dome of white marble flanked by colossal composite columns—overlooked the growing downtown. The dome peaked into a cupola, adorned with a gilded statue of the Independent Man, symbolic of the independent spirit that led Roger Williams to found the colony. Man, in all his imaginative capacity, became a beacon, rising above nature.

A few years after the new State House opened, the New York, New Haven and Hartford Railroad Company began building a railroad track to connect downtown’s Union Station to the tracks that ran across the Seekonk, at the top of College Hill. Frustrated by the impassably steep grade of the hill, and the houses built erratically up its slope, the railroad decided it would be easier to go through than up.

By 1906, tunnel construction had begun in earnest. Teams of construction workers drilled and dynamited through the soft shale earth, working in 10-hour shifts, 24 hours a day. A small electric train ran through the growing tunnel, carting out the excavated earth in wooden carts. It took two years for workers to clear the almost mile-long tunnel, and a few more months to run two tracks—one for passengers, one for freight—through the hill. The trains—moving coal, oil, and people to and from other industrial New England cities—shook the foundations of the houses on College Hill as they rattled through the tunnel. The railroad overcame the inconveniently hilly geography with dynamite, cement, and braces.

Since 1640, Providence had grown far beyond the chain of seven hillets that ringed Williams’s original plot. It was no longer obvious which of the city’s many inclines constituted the seven hills. In 1937, a group of thirty women from all over Providence formed the Seven Hills Garden Club, but in researching the city’s lore, they discovered that local historians had long debated which slopes were the original seven hills. In their founding documents, they identified the original hills as: College Hill, Weybosset Hill, Tockwotton Hill, Christian Hill, Constitution Hill, Federal Hill, and Smith Hill.

The name seemed apt for a Christian club that sought to beautify the city with gardens. The members shared gardening tips, cleaned trash from roadways, organized flower shows, and wrote poems and beatitudes. By 1941, the club had adopted a verse from a poem by English poet Dorothy Frances Gurney as their motto:

“The kiss of the sun for pardon,

the song of the birds for mirth

One is nearer God’s heart in a garden,

than anywhere else on earth.”

In a city built on holy hills by men who worked against the constraints of nature to reshape the landscape to their own design, the Seven Hills Garden Club members felt closest to God in gardens. They found solace from the busy, industrialized city in plants that grew in green creeping tendrils and unfurling blossoms.

Standing on top of College Hill in 1955, a surveyor of Providence would have first noticed the tall peaks of smokestacks and boxy edges of factories that rose over the maze of roads. The city’s many metal and textile factories had profited from World Wars I and II, but production had slowed and unemployment rates had risen as soldiers came back from the second war.

Automobiles—boxy metal Model T Fords—swarmed like industrious beetles through the city, easily climbing the winding, steep streets of the hills. Trains fell out of favor as cars became more affordable and ubiquitous; in the early 1950s, the railroad company removed the passenger train track that ran through the College Hill tunnel. Cars took over the city. Trees were felled as roads were widened and paved, and wild flora along the streets withered from the constant clouds of thick exhaust smoke. Members of the Seven Hills Gardening Club planted flowers and herbs in their yards and church gardens as public green space continued to shrink.

Today, the highest point in Providence isn’t one of the original seven hills, and it isn’t open to cars. Neutaconkanut Hill—which marked the northwest boundary of Williams’s original land agreement with the Narraganset—rises 296 feet above sea level on the western edge of the city. Sturdy cement sidewalks, built by the Works Progress Administration in the 1930s, make it easy to climb the hill’s wooded, rocky slope.

From the top of the hill, you can see eastward as the whole city unfolds. Straight ahead, the cluster of grey stone and cement skyscrapers that make up the heart of downtown Providence—formerly Market Square—tower over the landscape, but are dwarfed in scope by the sprawling, leafy grids of residential neighborhoods. To the southwest sit the solid sandstone turrets of the Armory, and beyond those, the three Point Street smokestacks that seem to rise out of a glimmer of the bay. If you angle yourself to the northeast, you can see through the leaf canopy to where the sun turns the dome of the State Capitol a brilliant white. From above the city, the smaller seven hills seem to disappear, the landscape flattening as it stretches out, until the city blurs into the endless, godly blue of the horizon.