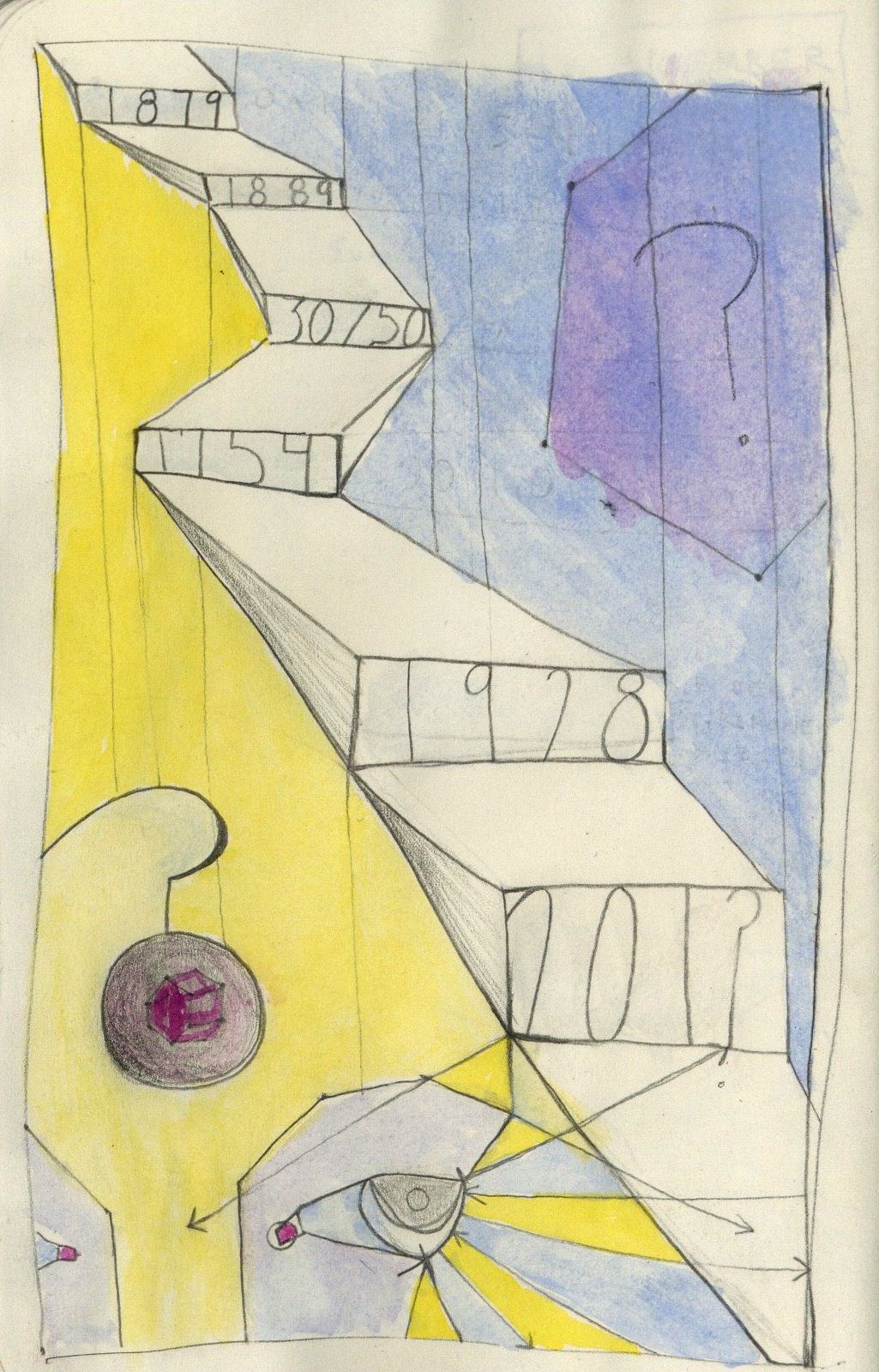 In 1879, chemist Constantin Fahlberg came home from a long day of experimenting with coal tar. Upon sitting down to eat, he noticed that his dinner rolls were sweeter than usual. When they tasted unspectacularly bland to his wife, he realized the taste must have been coming from his unwashed hands. As Fahlberg noted, “I had discovered some coal tar substance which out-sugared sugar.” Fahlberg, legend has it, jumped up from the dinner table and rushed back to his laboratory, where he tasted everything in sight until he identified the sugary culprit. Fahlberg had discovered saccharin, the popular artificial sweetener with a sweetening power 220 times that of cane sugar. The find would rocket him to fame and riches.

Serendipity has aided countless scientists in their search for answers, despite the dread scientists often attach to the unexpected. Without serendipity, we wouldn’t have the microwave, Velcro, or Teflon. It can be surprising how much of it exists in the judicious and deliberate world of science, a realm typically thought of as one of intense focus, planning, and intentional seeking.

In a year-long study of three different labs, University of Toronto researchers found that between 30 and 50 percent of all scientific discoveries are partially accidental. The authors of the study categorized findings as “unexpected” or “expected” based on scientists’ reports of their initial prognostications, and found that over half of the findings were unexpected.

Our world might be dramatically different if not for a certain small distraction or mislabeled test tube. If Alfred Noble had not cut his finger one day at work we would not have dynamite; if other accidents hadn’t befallen scientists’ actions and decisions, we would not have Saran Wrap, Silly Putty, implantable pacemakers, safety glass, or stainless steel.

But the stakes of these discoveries go beyond just the ease afforded by microwaves in heating up popcorn. Take, for example, a life-saving hormone: insulin. In 1889, German physicians Joseph von Mering and Oscar Minkowski removed a healthy dog’s pancreas in the hopes that they would learn about the pancreas’s role in digestion. A few days later, the doctors noticed flies buzzing around the dog’s urine. Upon testing the urine to uncover the flies’ odd affinity for it, they found sugar in the pee. This realization might not be striking to the layperson, but von Mering and Minkowski pieced together the conclusion that the dog had become diabetic. The doctors established the link between the pancreas and diabetes, paving the way for the invention of insulin by later scientists.

Royston Roberts notes in his book Serendipity, “The word serendipity was coined by Horace Walpole in a letter to his friend Sir Horace Mann in 1754.” Walpole wrote how impressed he was by a fairy tale in which “The Three Princes of Serendip ‘were always making discoveries, by accidents and sagacity, of things which they were not in quest of.’” However, science is not a fantasy in which serendipity graces a lucky few who inevitably go on to make groundbreaking discoveries or inventions. In an interview, Dunn said that because the “thunderbolt”-like stories receive the most media attention, “there are a lot of cultural misconceptions both inside and outside science about what discovery looks like or feels like.” Rather than playing out like “a fairytale,” Dunn said serendipitous discoveries can also be “fairly anticlimactic” in that they “transition from being sort of universally dismissed to being accepted.” Discovery in science is usually a slow, ongoing process that takes years. During this process, Dunn says, “wisdom can be crossed very quickly without most people realizing.” Only those who recognize serendipity when it strikes, however, are able to take advantage of this unexpected wisdom. As Louis Pasteur once said, “In the fields of observation, chance favors only the prepared mind.”

Roberts searched for scientists who had a knack for accidental discoveries. In studying scientists like Joseph Priestly, Louis Pasteur, and William Henry Perkin, he realized they shared two characteristics: curiosity and sagacity. Curiosity is the driving force residing in born scientists. Sagacity, however, takes a bit more: in order to be considered sagacious one must be a true observer, and take note of unexpected phenomena rather than dismiss them as trivial. Sagacity and serendipity, it seems, go hand in hand. Without sagacity, the serendipitous event Roy Heath observed in his laboratory went unexplored—when Heath stimulated the brains of schizophrenics and they reported feeling pleasure, he failed to inquire further and thus missed his chance to discover “pleasure brain circuits.”

While researching the flu in 1928, Alexander Fleming noticed that mold had contaminated one of his petri dishes. Interestingly, the area surrounding the mold contained no traces of the original flu bacteria, staphylococcus. At this point, protocol would dictate that he jot down a note documenting the observation, curse the rotten luck that allowed the slide to get contaminated, and throw it away. Instead, Fleming embraced the unexpected and let the mold grow. In doing so, he turned his luck from miserable to fantastic: the mold Fleming had discovered became the precursor to the super drug penicillin. Because Fleming had the wherewithal to recognize the potential medicinal uses of the unexpected mold, he ushered in a new era of antibiotics, and received the Nobel Prize in 1945 for his work.

As Hans Seyle, a pioneering Hungarian endocrinologist, stated to the Canadian Senate on Science Policy in 1964, “I doubt that Fleming could have obtained a grant for the discovery of penicillin on the basis [of highly detailed research plans] because he could not have said, ‘I propose to have an accident in a culture so that it will be spoiled by a mould falling on it, and I propose to recognize the possibility of extracting an antibiotic from this mould.’”

Herein lies the difficulty of trying to place a value on—and actively foster—serendipity in science. When a scientist wants to perform an experiment, he or she typically applies for funding. Much of this funding is available through federal grants composed of taxpayers’ dollars, which means that the scientist needs a good reason for spending money on any given project. Consequently, scientists must explicitly spell out how their research may impact society, the environment, etc. This obviously limits the amount of spontaneity that can take place. Every dollar has to be accounted for months in advance, and deviations are usually taken to mean that the original plan did not work. But Dunn says that this kind of “failure” is not necessarily a bad thing: “The reason that they would fail is often because answers would be different—very different than what we might expect.” As Dunn says, a lot of this has to do with “how we define success and failure.” When it comes down to it, all information is created equal. Unexpected answers are answers all the same, and as we have seen, the unexpected can lead to great discoveries too.

Is the scientific process, from grant writing to publication in a peer-reviewed journal, conducive to exploiting and maximizing the potential of serendipity? As federal budgets shrink, Dunn says, “There’s a real circling of the wagons around ideas that have a high chance of success.” Dunn continues, explaining that “there is more serendipity when you take bigger risks, so by definition in science, low risk means that you have a good idea of what outcome to expect.” Low risk, Dunn says, also “generally means low serendipity.” He says, “science is generally very conservative... there are places where that conservatism is very important such as in interpretation of data that we have at hand, but it also trickles through to other parts of the process like designing projects.” Herein lies the tragedy of conservatism in the scientific process: the lowered potential for chance discovery.

Is there a solution? European grant agencies tend to fund people while American agencies fund individual projects. Another line of thinking among American grant giving agencies states that the most fair and productive way to fund science is to give grants to people at random across the country. It is unclear whether any of these solutions is better than the current grant-giving system, or whether there is any solution at all. What is clear is that the death of randomness in the scientific process, a pinnacle towards which society seems to be continually striving, is paradoxically disadvantageous to science and humanity as a whole. Randomness, accidents, and the unexpected are the crux of what makes science an interesting, vibrant creative process. Sometimes, the most interesting and groundbreaking science comes about because of a cut on a finger or a bit of mold growing in a petri dish. Science as an enterprise today would do well to allow the spirit and creativity of the mad scientist to live on by embracing the unexpected. This collective path towards the truth on which we all tread is a meandering one, and in this case, following the straight and narrow will not get us there any faster.