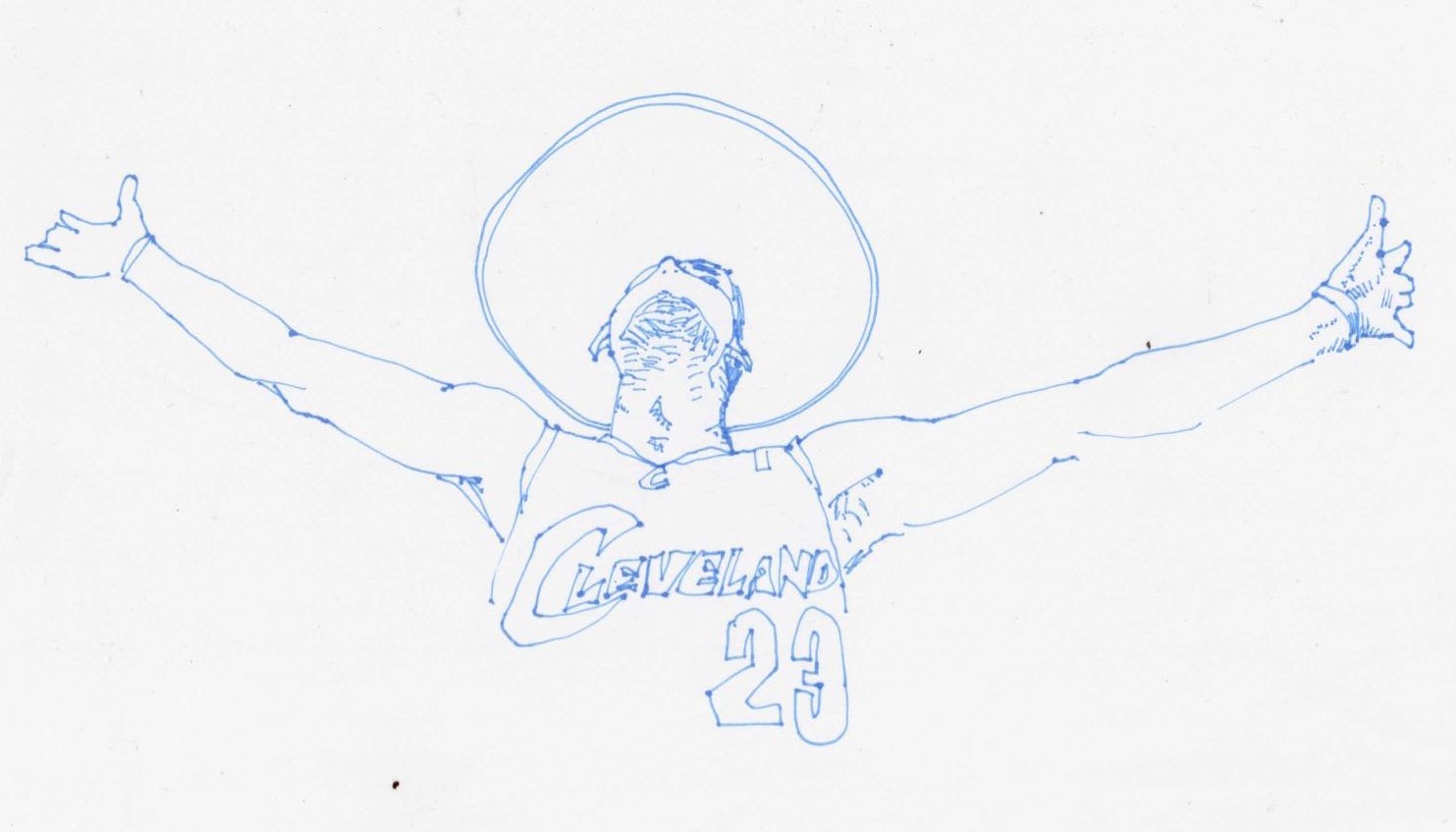 We look up to the heavens: birds chirp, sunlight wrestles through the cloudy sky. As a soft piano ballad fades in, the camera brings us back to earth. We’re driving. We pass rundown city blocks, tired apartment complexes, a local burger joint with its changeable sign reading “Welcome Home LeBron,” children playing basketball. A tender female voice speaks over our journey through the city: “Akron is home. This is the city that raised you. I’m so proud of you. Welcome home, son.” She speaks these last words as we reach St. Vincent-St. Mary High School, LeBron James’s alma mater.

James walks through the front doors into the school’s lobby, his head down, his movement steadily towards us. A-a-amen. Amen. Amen. Irish singer Hozier belts this final religious affirmation as James enters the gym in which he first became a national star.

Take me to church
I'll worship like a dog at the shrine of your lies
I'll tell you my sins and you can sharpen your knife Offer me that deathless death
Good God, let me give you my life

Hozier’s chorus narrates the next minute and 10 seconds of the Beats by Dre commercial, released in mid-October. James is pictured lifting weights shirtless intermittently throughout: he looks like Atlas of the rust belt in these images, carrying the post-industrial landscape of downtrodden Akron on his back. As he transitions from lift to lift, video clips of his upbringing punctuate each movement. We see his hands interlocking with his mother’s, his backpack being packed, their old house being demolished, their fridge opening to empty shelves. “Don’t ever forget where you came from,” the same woman says—it’s the voice of his mother, Gloria James. “Re-established 2014,” appears in stark white text, a reformulation of the “Akron Est. 1984” tattoo that adorns his trapezii. Amen. Hozier’s song fades along with the image of James, eyes closed, countenance resolute, Beats in ear.

In 2010, James announced his move from Cleveland, where he played since 2003, to Miami on “The Decision”—an hour-long spectacle broadcast nationwide in which he declared he was “going to take [his] talents to South Beach.” Grantland writer Andrew Sharp described it as “so tone-deaf and ridiculous and cruel to Cleveland that we’ll remember it forever.” The backlash from the Cavalier fan-base was immediate, unrelenting, and venomous. Fans burned his jersey. Dan Gilbert, the CEO of Quicken Loans and owner of the Cavaliers, wrote in a public letter, “[The people of Cleveland] simply don't deserve this kind of cowardly betrayal...This shocking act of disloyalty from our home grown ‘chosen one’ sends the exact opposite lesson of what we would want our children to learn.” James became one of the nation’s most hated athletes. Sports writer Bill Simmons wrote of the aftermath of “The Decision,” “We turned him into a wrestling heel, pushed him to a dark place, affected his personality, planted seeds of doubt that blossomed like a black rose.”

On July 11, James publically announced his return to Cleveland in Sports Illustrated. The tone of the letter was a stark break from the egotist of four years prior. “What if I were a kid who looked up to an athlete, and that athlete made me want to do better in my own life, and then he left?” he writes to himself rhetorically, the closest thing to an apology he’s given. “People there have seen me grow up...I want to give them hope when I can. I want to inspire them when I can. My relationship with Northeast Ohio is bigger than basketball.” His letter demonstrated a deep self-reflectiveness, not only of the person he wants to be, but also of the responsibility brought on by his position within the community. He was thoughtful and sincere.

And he was re-embraced. The New York Times Magazine writer Sam Tanenhaus described James an example of “civic obligation and social responsibility.” College basketball coach Mike Brown said of James, “He elevated himself to the pantheon of athletes who understand that it’s not just about how many shoes you sell or endorsements you have.” And Northeast Ohio welcomed him with open arms and a citywide celebration.

James’s narrative seems to be one of personal redemption: he erred in narcissism, matured through humility, and was given a second chance. And yet, what has emerged throughout the months following his homecoming is not a narrative of personal redemption for James, but of collective redemption for Northeast Ohio through devotion to and faith in James. Cleveland resident Haven Ohly described his reaction to James’s decision in The Washington Post: “Nobody has had it like us. Everything has gone wrong. So this is a chance to make it right. This means so much for the people who live here.” Nathan Okuley, a coffee shop owner in Cleveland, told Sprudge, “It’s pretty dynamic to realize how much influence something like this has on a community. It brings a brand new spark of excitement to a lot of people. It changes the way that we talk casually on the day to day.” In The New York Times, William Rhoden described the spirit of the city after James’s announcement: “It’s summertime. There’s dancing in the streets. Many of the dancers are the same ones who burned James’s jersey and cheered Gilbert’s letter.” James may be the one with “CHOSEN” tattooed on his back, but it is Cleveland that feels chosen.

The second coming of Cleveland’s son has had an overwhelmingly Christian feel to it, in imagery, language, and sentiment. The Boston Globe described his move to Cleveland as “the Prodigal Son, returning home.” James’s nicknames are “The Chosen One” and “The King.” His Nike slogan is “Witness,” a Christian term often used in relation to experiencing the Divine. Bill Simmons titled his article about James’s return, “God Loves Cleveland: Why LeBron James—unparalleled NBA genius, heir to Michael (and Larry and Magic)— went home.” In the title’s construction, LeBron James can be read as the antecedent to God. Father Damian Ference, a Catholic Priest in Cleveland, wrote in a blog post, “Northeast Ohioans are walking with our heads high...because our son has returned home.”

Back to the commercial. The structure of the interrupted clips gives us a sense that James is physically elevating the region. Northeast Ohio will be risen, one bicep curl at a time. And with every weight lifted, James’s face is pained because he has the city on his back, and that’s hard work. As he sits alone in the empty locker room, his face resolute, we see that it’s a lonely sacrifice. Good God, let me give you my life.

Cleveland has struggled. It has an income-per-capita of just over $15,000; it’s seen an exodus of young families from the urban center to the suburbs over the past decade; in 2011, its high school graduation rate was 54 percent. Cleveland has experienced a genuine and understandable uplift since James’s return, both in terms of economics and culture. A recent study said James’s return could bring in an extra $500 million to the local economy. And his choice to move from Miami to Cleveland has made residents feel like their city is worthy again—a recent article on livability.com featured the subtitle “LeBron James moved back to Cleveland, and here's why you should consider following him.”

But the religious rejoice has overshadowed any secular excitement for James’s return. In ESPN’s coverage of James returning to Cleveland, an anchor stood in front of an excited crowd. What we saw was not excited basketball fans, but a sign flanking the stage: a photo of James, arms spread wide, head raised towards the sky. His body position evoked Jesus on the cross, and in the empty space above his head, the words: “THE KING HAS RETURNED.” At every turn, the religiosity seems to have a corporate sponsor, or at least a corporate distributor: Nike, Beats, Sprite, the Cavaliers, newspapers, television stations. According to them, James isn’t just a great, mortal basketball player. He’s a demigod. And don’t you want to wear God’s favorite headset, to consume His favorite soft drink, to pay for tickets to witness the sublime, to read about His glory?

In Gilbert’s letter in 2010, he nebulously wrote, “Some people think they should go to heaven but NOT have to die to get there. Sorry, but that's simply not how it works.” At the time, these two sentences were impenetrably unclear. It was uncertain who “some people” were, and what death and heaven represented (assuming they were metaphorical). But looking back over the past four years, those two sentences are given new meaning. Did Cleveland die when James left? Is this their heaven now that he’s returned? In many cities, they expect championships; in Cleveland, their King coming home is an end in itself. Now, let’s sell some shit.