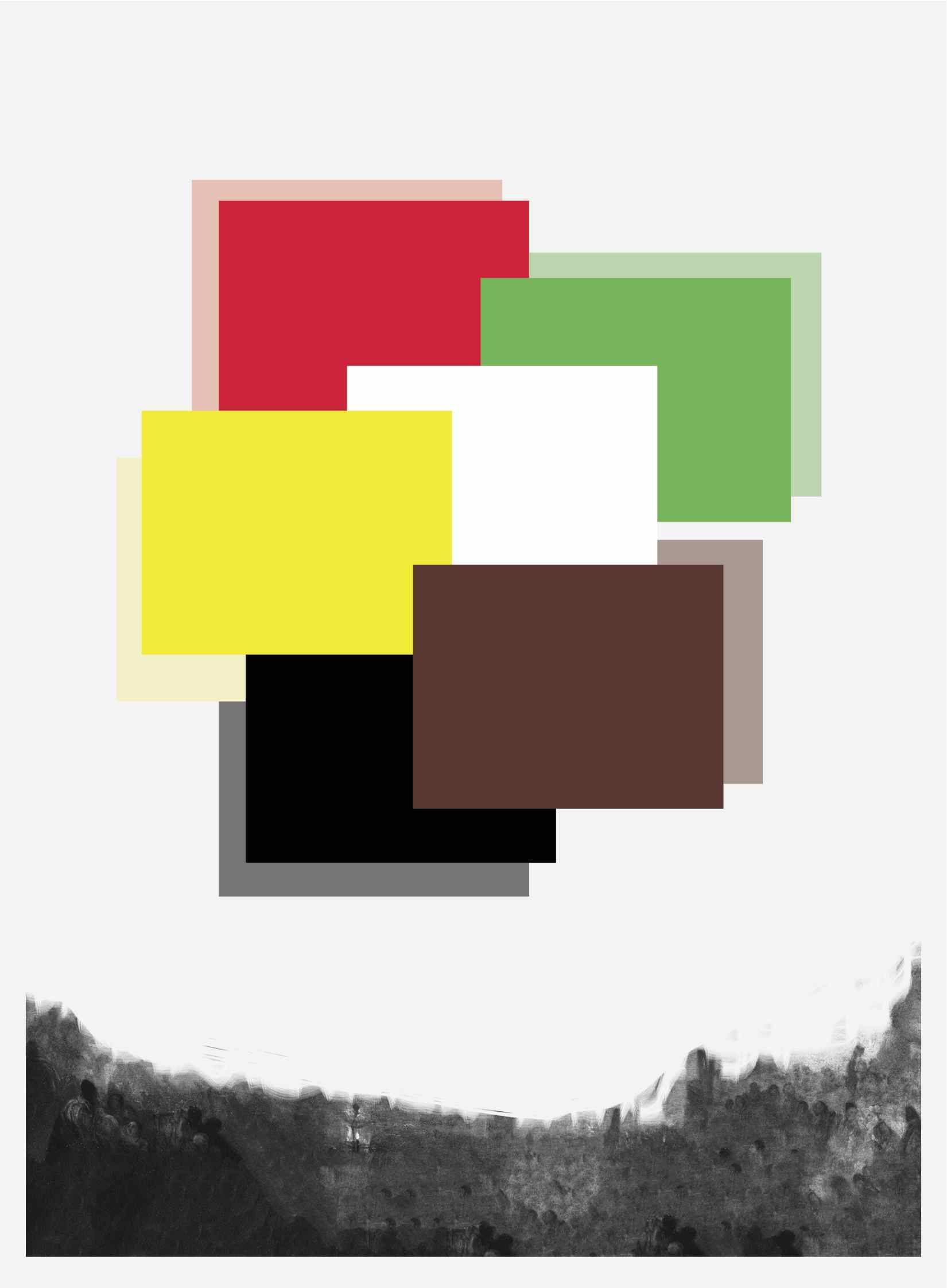 A second cut on top of the first hurts more. Incision #1: They told Zeina that her sister Maha was a martyr. Incision #2: Some people from her village, or possibly from a regional Hezbollah chapter, had the fresh bodies from Khirbet Selm dug up in the government mass grave in a distant town. The bodies were driven back to Khirbet Selm and paraded through the village while a man on the back of a modified pick-up truck, decked out in green and yellow, lead the crowd in chants: “Israel, Israel, enemy of the Muslims” “When you call us, Prophet Hussein, we answer ‘Present!’”

Zeina’s son Karim was also killed by the Israeli airstrikes. That’s the intended kicker at the end of the 2007 movie, Under the Bombs. They were hunting a ghost—or, rather, another kid wearing the dead Karim’s clothing.

It’s hard to tell what is real and what isn’t in Under the Bombs. Director Philippe Aractingi started filming his movie about the confusing aftermath of the July War just two days after it ended. The two professional actors travel through the real landscape of destroyed South Lebanon and confront real people and scenes, relying on both scripts and improvisation to craft a fictional narrative against the backdrop of an ongoing reality. I don’t think they staged the public funeral scene. I don’t think they could have.

Finding out that Karim was dead all along is disturbing, but for me the funeral scene was the climax of the nightmare. “Let them bury her themselves,” says Zeina. “They didn’t ask her opinion. Nor mine either.” The character of Maha Noureddine was not a Hezbollah soldier. Viewers don’t even know her political opinions. Well over a thousand people were killed by the airstrikes, most of them civilians. But the Lebanese government doesn’t subdivide the death toll into combatants and noncombatants. Colloquially, they’re all called martyrs.

I felt a little sick on the car ride back. I couldn’t help but wonder what happened immediately before and after Hezbollah discovered the Israeli spies whose forged papers were on display. I didn’t want to think about it. Better to admire how polite the Hezbollies were—right? My friend was prodding me. She wanted me to agree that they’re not so scary. The tour guide was very formal—dressed neatly in a blue button-down and chinos, saying “God bless you” every time I sneezed. He had spent seven years living in Canada, he told us. So he was once a Lebanese person living in the West, just like I am. Surely he wouldn’t have begrudged me my American passport?

“So do you think they’re terrorists?” she asked me.

“Akid la,” another friend interrupted, “they are protecting us from Israel.” I don’t remember what car passenger number four said. She never says anything political.

“Do you know why I’m proud of us?” asked my first friend.

“We didn’t let them walk all over us. We refused to live in fear... This is what I would say to the Western media. I am proud of my country. The morning the Israelis bombed the bridge on the way to work, I still went to work. I went around the bridge, yaneh, I wouldn’t let them stop me from living my life.” So much of our lives are spent thinking about what we would tell the West about ourselves. Even Samir Kassir’s Being Arab had to be content with “demonstrating the possibility of conducting a debate that is both about Arabs and for Arabs.” Do the eager translators of references (aren’t I one?) realize that Americans don’t see the pleas addressed to them on LBCI?

“But was it worth it?” I demanded. “It is easy for them to declare war on Israel, but the whole Lebanese people pay the price when the Israelis bomb the entire country. How many Hezbollah fighters died? And how many people who had nothing to do with them, who didn’t even support them, were killed? And look at us, we’re going to pay for the bridges, and the airport, and the power grid—not them. And they have the audacity to claim that a thousand people were martyred. It was their war, not ours. They fought it for Syria and Iran.”

“Of course they were martyred,” she said. “They died for all of us.”

“If a Lebanese dog was hit by an Israeli car,” I told her, “you’d say the dog was a martyr.”

3. The statue riddled with bullet holes, an arm blown off, never repaired

4. The An-Nahar building’s massive banner overlooking Downtown commemorating an editor who was assassinated

5. Samir Kassir square, and the statue of him

8. Every movie besides Caramel and Bostah

9. “Our superheroes are in black and white.” – Outpost Magazine Issue 03

11. The posters of the SSNP martyrs outside the party headquarters

13. The memorial to Pierre Gemayel in Bikfaya

16. The stories of a family death and what it did to everyone. What it still does.

17. The question: What will you do when Daash invades?

19. The thought that I really want to believe it is true for me as well.

20. The eyes of a thousand dead men and women looking down at you while you eat, drink, smoke, talk, laugh, play, shit. The weight of 7,000 years of history preserved in an archeological dig in the heart of downtown Beirut whose signs were stolen by some perverse person. The images of people whose bodies are still warm, watching you examine ruins both ancient and recent. From what political party? What religion? Who killed them? Was it Mossad? Was it Syria? Was it Hezbollah? CIA? Who will avenge them? The dead are waiting for an answer and no, that bombed out building won’t look much better on your way back from the trendy bar where you got drunk and talked about queer Arab liberation, and no we can’t promise you that Daash isn’t winning, and no you can’t go to Baalbeck anymore where your sister danced on the temple steps in a white keffiyah.

On 27 December 2013, 16-year-old Mohammad Chaar took a selfie with three of his friends. Moments later a car bomb went off, killing its intended target, former Finance Minister Mohamad Chatah. Chaar was also killed in the blast. In the days that followed some began to mourn the “martyrs” that were killed in the terrorist attack, but others refused to call Chaar a martyr. They started a social media campaign using the hashtag “notamartyr” to protest the
way that Chaar’s death was politicized. "I kept thinking to myself this isn't martyrhood, this is murder," blogger Dyala Badran told
BBC News as the campaign grabbed a small slice of international media attention. “Martyrdom actually requires a kind of self-sacrifice,” Raja Farah, another blogger, told CNN. “You have to be willing to die for something. And a lot of these bystanders that are being killed in these attacks never actually voiced any kind of interest in dying in a certain cause.”

In 10 years, how will Chaar be remembered? Will March 14 put his face on posters, despite opposition from online activists? I’ve seen his bloodied face. You can see it too if you google his name. It belongs to all of us now, all the living. We can make him, viz. the visual or auditory referent, the object, the signifiers that represent him, what we want him to be and he cannot respond. If people care enough he’ll be a lot of things simultaneously to different people—that’s the way it is with famous dead folks. Let the never-ending cycle of historical revisionism and argument begin and never end. It is a misfortune to die on the public radar.

I was 14 when I went on a school field trip to Washington, DC, where we visited the Vietnam Veterans Memorial. The Park Ranger kept on saying that these men and women “sacrificed their lives” for their country and I got fed up.

“How can you say that these people sacrificed their lives for anything when most of them were drafted into the army against their will?”