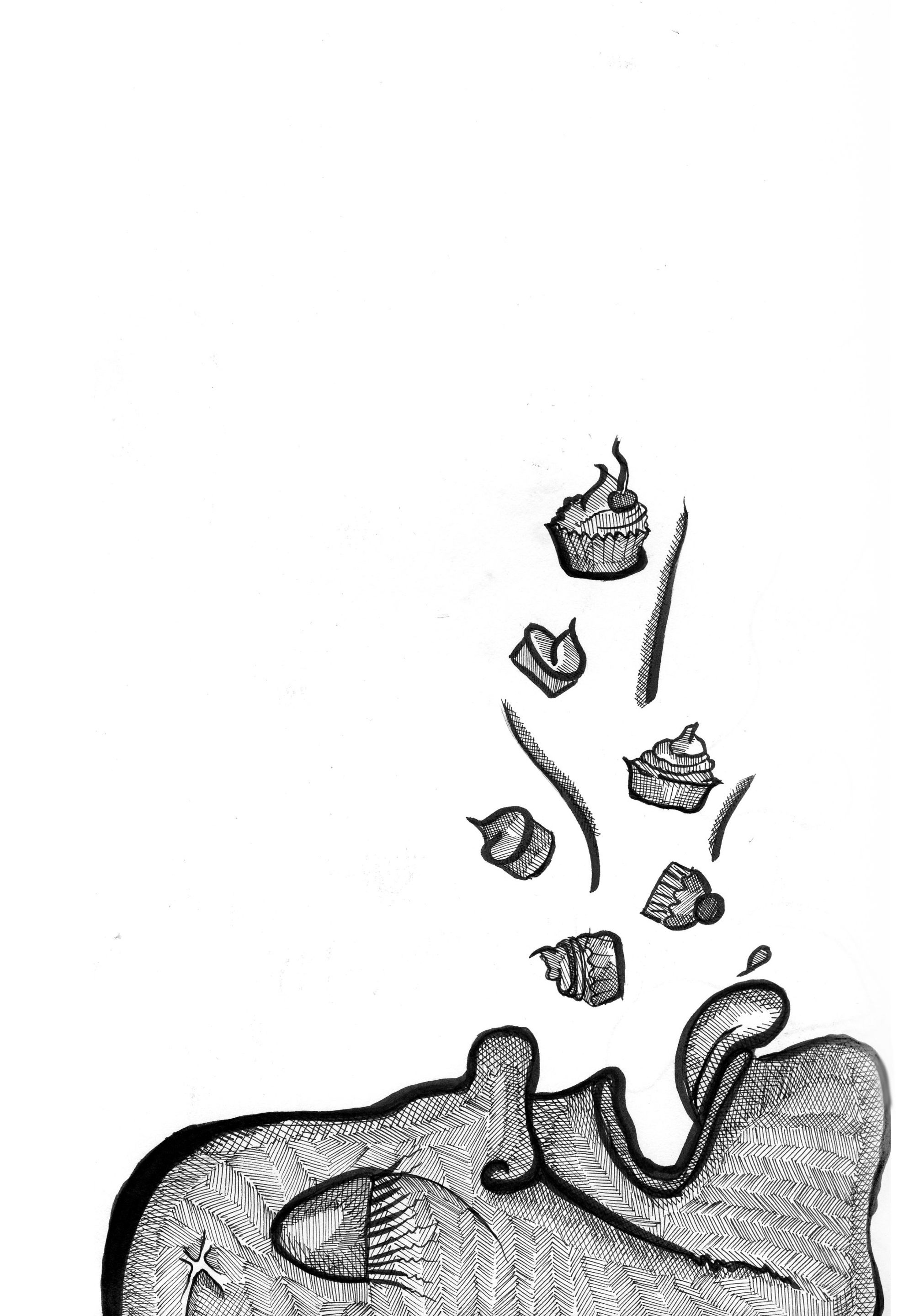 The backlash has been brewing for years. Disappearing are the 16 oz. porterhouses bathed in gravy served with a mound of mashed potatoes. The massive portions packing thousands of calories that have laid waste to the waistlines of millions of Americans are finally giving way to smaller, healthier options. According to researchers at University of North Carolina Gillings School of Public Health, people are eating more often while consuming fewer calories. This reimagining of the American diet has traditionally been confined to the savory sector: sushi joints and tapas bars have been multiplying furiously due to the public’s infatuation with bite-sized morsels. The last 10 years, however, have seen the trend move into the sweets sector with the rise of the miniature dessert.

Crumbs Bake Shop opened on the Upper West Side of Manhattan in 2003, just before the cupcake contagion began spreading through New York City. The company soon grew famous for its 4-inch, icing-encased behemoth and went public in 2011 before expanding to 79 stores by 2012. Each cupcake costs between $3.50 and $4.50, and flavors such as “Birthday Cake,” a vanilla buttercream-filled beast of a dessert, contain upwards of 600 calories.

Yet, after reporting losses of over $28.5 million during 2012 and 2013, Crumbs was forced to file for bankruptcy, narrowly avoiding total collapse by selling its humbled remains to Lemonis Fischer, parent company of Dippin’ Dots, a micro dessert in its own right. The intrigue here lies not in Crumbs renewed ability to sell cupcake deathstars but in the company’s startling demise. While Crumbs peddled the gargantuan, competitors Sprinkles and Magnolia shot to the other end of the spectrum, riding diminutive iterations of creamy excess to the top of the market. It seems even Crumbs saw the writing on the wall—but its “Tastes,” a line of little cupcakes, was too little, far too late to save the company. How could a chain that grew exponentially for over eight years collapse in just two? Is it possible that the cupcake Goliath was felled by a bunch of bite-size Davids? Though one can point to the cooling of the cupcake craze, the real answer lies in the bakery chain’s inability to shrink with the times.

Crumbs’ demise coincided almost perfectly with the speedy rise of Baked By Melissa, another mini-chain that produces tiny cupcakes in twenty different flavors. Though the company started as a hole-in-the-wall in New York’s SOHO district, the last five years have seen Melissa open twelve locations. The website boasts that “Each of our Original Flavors have [sic] fewer than 50 calories!” and that 4-5 cupcakes are equivalent to a “normal” dessert serving. At $1 each, the cupcakes are also affordable. It is this glut of flavors and the ostensible healthiness of a single cupcake that have combined to catapult Baked By Melissa into the cupcake pantheon. Instead of buying a solitary, massive dessert from Crumbs, one can enjoy the Red Velvet, Chocolate Chip Pancake, Cinnamon Bun, and Tiramisu. What could possibly be better?

The cultural fixation with tininess, along with skinniness, has helped foster the small foods revolution. By marketing itself as a purveyor of comparatively healthy, small snacks, Baked By Melissa has, intentionally or not, aligned itself with the idea that smaller is better. Even though one is likely to consume 4-5 cupcakes in a single sitting, thereby consuming a regular dessert’s worth of calories, the illusion of healthiness drives the appetite for tiny sweets.

There are, however, many contradictions in the company’s marketing approach. Melissa’s biography sheds light on her pastry philosophy: “Drawing on inspiration from the care-free rock ‘n roll culture of the ’60s and ’70s and the idea that people should be able to taste more flavors without that post-dessert guilt trip, Melissa...opened the first Baked by Melissa Shop.” The use of the term “post-dessert guilt trip” connotes the terrible danger of over-indulgence, a statement seemingly irreconcilable with the company’s attempt to present itself as a proponent of “care free rock ‘n roll culture.” Meanwhile, a large proportion of its customers are careworn young people obsessed with staying slim. The stores’ sterile white cabinets and spotless glass display cases recall hospitals much more than mud-spattered Woodstock tents. The closest the company gets to invoking the ’60s and ’70s is its “Tie-Dye” cupcake. There is simply nothing rock n’ roll about Baked By Melissa; indeed, getting baked with Melissa seems to be no part of the plan.

According to Neil Irwin of The New York Times, trends tend to start at innovative restaurants in cultural capitals and then move outwards. “Over time, they become more and more mainstream, eventually finding their way to neighborhood bistros in the hinterlands and chain restaurants across the country,” Irwin writes. A classic example is fried calamari, a dish that was in vogue with the restaurant elite in the 1980s and has since made its way to Arby’s across America. Irwin goes on to argue that it has traditionally taken about 16 years for food trends to spread to the mainstream. But miniature foods have become a sensation far more quickly.

In 2011, just four years after miniature foods started to rank in the top five food trends according to the National Restaurant Association, Starbucks introduced its line of “Petites,” a collection of eight desserts under 200 calories that each cost $1.50. Cake Pops, Whoopee Pies, and Lemon Squares are the flagship options. Annie Young-Scrivner, global chief marketing officer for Starbucks, notes that, “our research shows that customers are looking for that little something in the afternoon. They just want a couple of bites of something to complement their tea or espresso beverage.” Piggy-backing on the idea that consumers desperately desire more choices that masquerade as healthy, Starbucks is trying its hardest to offer good options to the calorie-conscious.

It is necessary to point out, however, that calories are not the only evil lurking within sweets. The Starbucks Red Velvet Whoopie Pie contains 190 calories and 19 grams of sugar. It is generally thought that a grown adult consuming 2,000 calories a day should take in about 25 grams of sugar. This “petite” snack, as Starbucks likes to call it, leaves little room for other sugars and provides few nutrients. In an interview with Today. com, Kathy Hayden, an analyst for Mintel, a food trend research company, notes that miniature sweets “really fit well with the snacking phenomenon that has not by any means peaked.” Hayden points to the fallacy that miniature foods are contributing to making people healthier by replacing desserts. Ironically, they are being consumed as snacks, thereby adding to caloric intake. It is because they are small that mini-desserts are over-consumed. One is less likely to buy a massive cupcake with a 5 PM coffee than to scarf down a Starbucks Lemon Square. So, will smaller sweets lead to a thinner nation? “I don’t think anyone’s losing weight from them. I think that they’re a nice little extra,” said Hayden.

Yet, beneath the shiny gloss of marketing rhetoric dwells an even more insidious societal truth. For the first time in history, it is the poor who are overweight. The excess of cheap sugars and fats in the American diet has led to the explosion of obesity across the country. While high-calorie foods are inexpensive and plentiful, massive portions have become a signifier for obesity, a new signpost of class distinction.

Baked By Melissa, by charging more for smaller helpings and claiming fewer calories, is keying on this insecurity. By selling 50-calorie quarter-sized pieces of cake dolloped with frosting, the company appeals to the rich who seek to eat healthy and are willing to pay for it. In a depressing twist, people are lining up in droves to pay more for less food, a tiny act of conspicuous consumption. It is a competition between bakeries of who can offer less bang for the buck, and the wealthy cannot seem to get enough of it, eager to distinguish themselves from the engorged masses.

Psychologically, tiny desserts work to exploit the consumer desire to have the most possible choices. Miniature sweets, by dint of their size and variety, afford us the impression of opportunity, the illusion of variety, and the false impression of consumer agency. This illusion of satiety, after all, is what the miniature food trend offers; but it is nothing more than an artificial stopgap, as the consumer is never truly satisfied.