A Part of Me 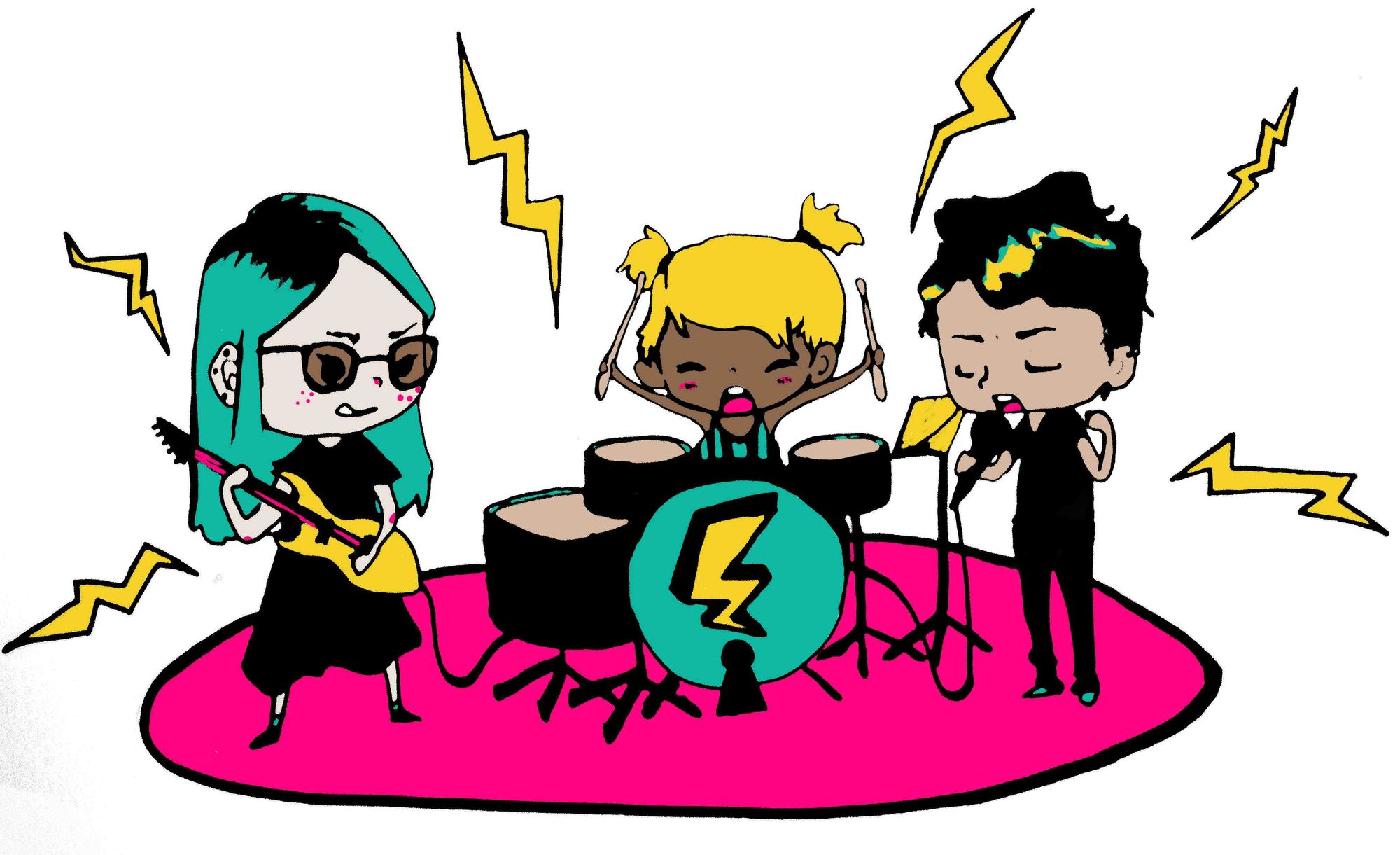 Dylan Baldi shrugs and strums a couple quick chords on his Gibson. His mustache rolls back and forth over a smile as he mumbles. Between his entropic mane, thickly forested jowls, and horn-rimmed glasses, his fuzzed-out face gives no other hint of his expression beyond a floating smile. “I feel like a different person than when I wrote [our previous album]... I hope I’m getting better.”

Baldi has just finished “I’m Not Part of Me,” the second song of his set for KEXP in Seattle. “There’s a way I was before,” it begins, “But I can’t recall how I was those days anymore.”

Cloud Nothings, Baldi’s band, is one of many in a resurgence of lo-fi pop-punk. Starting off as a disillusioned college student uploading Garageband recordings to MySpace, Baldi completely embraced the lo-fi aesthetic: record everything yourself, run your vocals through a shitty amplifier, don’t use fancy drum sets, and let bright fuzz reign, reign, reign through your mix. The past six years has seen the pages of Pitchfork light up with bands embracing the lo-fi aesthetic: Wavves, FIDLAR, Bleached, Girls, King Tuff, Best Coast, Harlem, The Orwells, Twin Peaks—all slicking back wayfarers, glugging cheep beer, and trying almost too hard to make it clear as day that they, like their progenitors, don’t give a fuck.

This new wave of bands borrows endlessly from the attitude and sensibilities of early ‘90s pop-punk rock. When I saw The Orwells last year through the sprawling arms and projectile sweat of a mosh pit, the lead singer sprayed his water bottle at the crowd. 20 years prior Green Day was starting a mud fight with the audience at Woodstock ’94 so large they had to stop their set. Cloud Nothings croon, “My mind is always wasted listening to you;” Green Day sings, “As you sit around feeling sorry for yourself.” The same energetic kids are picking the same fights, singing the same bratty lyrics. But why? Why are we seeing these same attitudes sneak back 20 years later? Aren’t we, like Baldi says, different people than we were in the past?

A first glance at music videos makes it seem as though we’re not. Blink-182’s video for “All the Small Things” features band member Tom DeLonge sitting on the toilet dressed in a borderline fluorescent white boy-band suit, a re-enactment of a Britney Spears video, and a naked Blink running away from the ocean, junk swaying in the beach air. The point being, Blink had no problem looking like a bunch of goofballs. Which isn’t to say that today’s reincarnation of pop-punk is necessarily serious, but each act of humor is relentlessly clear about its own tongue-in-cheek-ness, to the point where the tongue is protruding several inches from the face. FIDLAR’s recent video for “No Waves” begins with a long ‘80s sitcom intro, à la Full House, that at a first glance might seem in league with the goofiness of Blink. But even this has the camcorder static inserted, a person who flips off the camera. Everything is overdone to the point where it tips the balance from camp to sarcasm. It’s still goofy, and it’s lovable in the same way that Blink’s videos are, but there’s a certain fear to it, as if the band is protecting itself from being called a sham, from someone claiming that they’re not serious enough, that there’s no real emotional depth to them.

Green Day didn’t launch themselves into the stratosphere with the messy vocals and sharp distortion of Kerplunk. They did it two years later, with the creamy bass and bright overdubbed guitars of Dookie. “Welcome to Paradise” was re-recorded on Dookie and became a hit. Green Day’s success came with the abandonment of a lo-fi aesthetic. Those bright guitars and tightly compressed harmonies became the hallmark of the pop-punk sound. Slews of spiky haired blonde kids screaming how much they hate the popular kids ran with the same aesthetic: The Offspring, Sum 41, Yellowcard, Simple Plan.

But that sound was just the concession that Green Day had made. Green Day came from the legendary Gilman DIY scene in Berkeley. They served as a release for the kids who sold burgers and mopped floors during the week, moshing in a small, dirty club with writing on the wall. They had nothing, and they were proud of it. Those kids didn’t want to see more than a couple amps and some young kids like them on stage. They didn’t want guitar tones drowned in expensive pedals. That was the scene Green Day loved; Operation Ivy and Rancid were the bands they idealized. But they became famous for the bright, thick sound they used in Dookie—the very compromise they had made to make their music more accessible. And the Gilman scene hated them for it. Years later, when Green Day returned to the Gilman after the release of Dookie, they found “Green Day sucks” written on the bathroom wall.

In 2008, Green Day recorded an album under the name The Foxboro Hot Tubs, using nothing but an 8-track and a crunchy guitar tone reminiscent of the one used on Kerplunk. They picked Best Coast as an opening act on their last tour a couple years ago. Between the two aesthetic decisions, Green Day seem to be trying to reclaim whatever it is they lost 20 years ago, returning to their Gilman roots. They became one of the biggest bands in the world, a band that even middle-schoolers were too cool to like. By the time they released American Idiot in 2004, Green Day had the booming drums and resounding guitar of arena rock. They were Grammy winners. The only way they could make a lo-fi album was to abandon their name entirely. In this way, the resurgence of lofi bands seems like an attempt to offer an alternative vision of what pop-punk could have been—perhaps even what Green Day had always intended.

But all this seems ironic. Recording technology has only increased in fidelity over the past 20 years. Even home recording has reached a point where everything can be done with reasonably high quality. It seems bizarre that to make a recording sound more authentic we have to consciously and purposefully distort the sound. I asked The Orwells recently how they recorded Remember When during a Reddit AMA. For “Mallrats,” they said, they ran everything, including the vocals, through shitty amplifiers in order to bring out that lo-fi sound.

Again, there seems to be a kind of fear, a desire to distort before anyone can claim that they’re trying to bring forth tremendous emotional depth. To try very hard to make it ostensibly clear that they’re not trying to create something that delights or moves the listener, even if that’s exactly what they’re trying to do. It’s kind of like not studying for your chemistry final and then drawing an elephant on the front of your blue book instead of taking the test. Do you want to be known as that kid who flunked the chem final, or that ballsy kid who drew a huge fucking elephant chowing down on some hydrogen atoms and walked away?

The kid who leaves the exam and the bands in the poppunk resurgence have one thing in common: they’re absolutely terrified of failure. Today’s world doesn’t forget. Everything is recorded, everything is broadcast. You don’t get to make a shitty album and just do a better job next time. That shitty album is going to be immortalized on the Internet. Every time someone googles your band, that 2.0 album on Pitchfork is going to rise right to the top. We feel nostalgic for a time when you could fuck around and experiment, when everything traveled by word of mouth and people only ever heard about the albums they should be listening to, not the shitty ones. The lo-fi tones of the pop-punk resurgence seems to be nostalgic for this pre-Internet era, to display a desire to return to the “golden era” of the resurgence’s heroes—but only partly.

Baldi languidly strums his guitar and croons out the side of his mouth. TJ hunches over his bass and anchors the chaos of Baldi’s strumming. Jayson, wearing a wolf t-shirt, smashes the ride cymbal so fast his arms seem detached from his body. Together, Cloud Nothings buzz and cut through the air, bouncing against the walls of KEXP.

Eyes closed, bellowing so hard he blows bits of his own beard apart, Baldi croons the chorus to “I’m Not Part of Me,” an almost simultaneous rejection and nod to the heroes of pop-punk past.