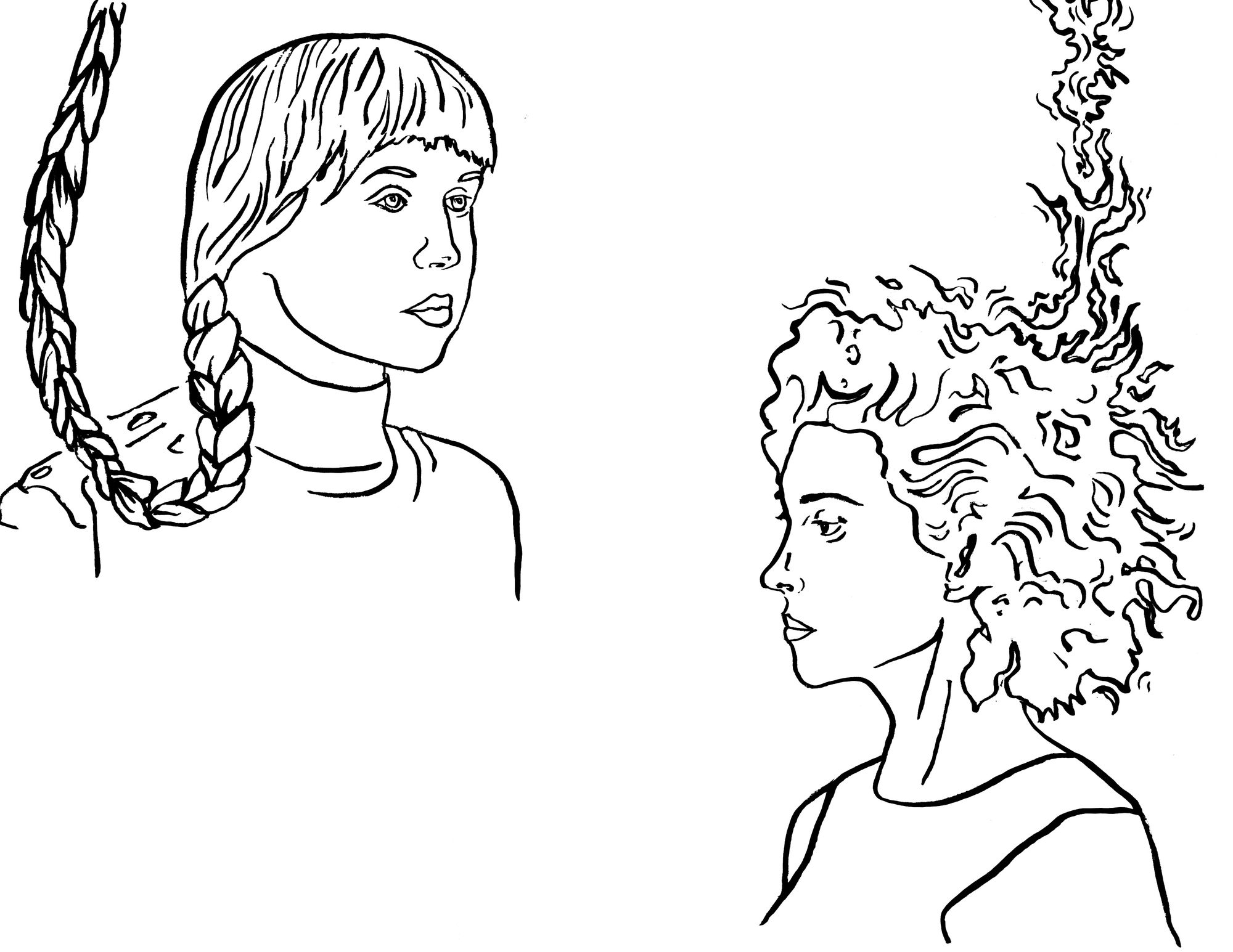 “Entombed in a shrine / Of zeroes and ones / You know” –St. Vincent, “Huey Newton”

Placing two artists on a bill together always invites comparison. The relation can be sonic: two musicians who play in a similar style. It can be of career trajectory: with time, the opener might headline the same venue. It can also attempt to claim new territory: two acts of disparate style, each playing for a new audience. Rarely, though, is the relation thematic: an evening of music designed to provoke thought in particular areas.

St. Vincent’s “Digital Witness” Tour, for which Holly Herndon opened a string of east coast dates, did not shy away from technology. Between the two sets at the House of Blues in Boston last week, the theme was comfortably worn; both artists focus their recent work on the possibilities and problems of technological overuse.

St. Vincent is the moniker of Annie Clark, a singer, songwriter, and guitarist whose pop melodies often come packaged in fuzz-filled blasts. Her vocal lines and guitar solos double over multiple octaves, battling for space through each frequency band. She plays music with no regard for alternatives. Since attending Berklee College of Music, Clark has toured and recorded with few pauses. Her fourth album, the self-titled St. Vincent, came out in late February.

The centerpiece of St. Vincent, “Digital Witness,” carries a message unhidden by imagery or metaphor. “Digital witnesses / What’s the point of even sleeping? / If I can’t show you / If you can’t see me / What’s the point of doing anything?” Drums lock into groove with marching horns, and when the chorus hits it’s near impossible not to shuffle in step. A single bass note slides up and down, moving opposite guitar chords that suspend, then resolve.

Holly Herndon is an electronic composer and performer, and a current graduate student at Stanford’s Center for Computer Research in Music and Acoustics. On Movement, her 2012 full-length, Herndon pushes her voice to extreme technological limits. Sounds leave her mouth at a constant rate, but return at uneven intervals. Her voice is never embodied, never disembodied. Spoken tones and syllables float from left to right before colliding with planes of booming drums. For much of the album, the downbeat is never where you expect it to be.

On “Chorus,” released as a single earlier this year, she samples her online activity, from Skype chats to the idle browsing of YouTube videos. Its sounds are dense and deliberate, the result of intensive studio work. The B-side, “Solo Voice,” turns a single, extended vocal tone into small packets spinning around the listener’s head. It was recorded in one take. In an email interview with the Independent, Herndon describes her work as “an unfolding experiment in reconciling the theory/practice and academic/popular divides that are so embedded in people’s brains.” The tension lives in her music, the way it plays between continuity and disjunction, sustain and attack.

This past week, Herndon released #sonicchatroulette, a web-based remix of “Chorus” that splits the track into thirty discrete samples. Visitors play parts of the song together in real time. When I logged on to the site last week, four people were practicing their own sequence, attempting to lock into a groove.

In her opening set, Herndon stands behind her laptop with her arms outstretched. The glow of her computer screen illuminates her face, black robe, and burnt-orange hair. As she pulls her arm across the surface of her laptop, a sweeping tone cluster moves from left speaker to right. Herndon uses an induction microphone to play the sounds of her hard drive; its oscillations generate data she uses to control different tones and effects. “A lot of the gestural interfaces I use, like the induction microphones, are done to make performing live a bit more volatile and interesting for me,” Herndon says in her email.

Her set moves quickly, never losing pace. It’s a deliberate and continuous construction, vastly different from her performances in an academic context, where she usually performs a single piece. As she tours, she keeps refining. No two shows are alike. At the end of Herndon’s set, she puts her hands together, bows, and exits the stage. “I really like the idea of my music reaching places that weren’t entirely designated for it,” says Herndon. “That would represent progress.”

As she moves through her set, some audience members fall into a groove. A version of “Fade” has feet stomping, hands patting, heads nodding. Others have more trouble with the music. Herndon’s performance of “Breathe,” in which she turns the sound of a deep inhale into a lush textural floor, startles the man next to me. He opens his phone, records a video on Snapchat, appends #WEIRDOPENER, and sends it off to a friend.

Technology, spun as something always new, insists on oppositions: digital and analog, virtual and real, online and off-. One word invites its opposite, closing a linguistic circle. Each pair of terms contains uneven relation: one inauthentic, one authentic. Technology talks in binaries, not spectra.

In its technical definition, analog refers to continuous temporal processes—one signal of voltage, position, or amplitude measured relative (analogous) to a reference. Changes oscillate rapidly, blurring into one signal. Your wristwatch is analog if its hour and minute hands move continuously; your synthesizer is analog if its oscillators, filters, and amplifiers are controlled continuously by electronic currents.

Digital processes take analog signals and sample them in discrete chunks. Rather than measuring one signal relative to a baseline, a digital process samples values at a fixed rate and reports the changes between sample points. The signal can be zero or one, its continuity reassembled from the captured bits. Where analog wavers, digital is precise. Your wristwatch is digital if its hour and minute read-outs change in discrete, blinking packets; your synthesizer is digital if its signal processing relies upon the re-generation of sound from quantized points.

Before digital, analog was not a necessary naming convention. Pining for analog technology is often misused and misunderstood as fetishized nostalgia—a time when things sounded better, a time when we were all more real. Read another way, returning to an analog mode asks us to think spectrally and continuously, in relativity and variation. Analog, as mode of thinking, offers an alternative to the binary, discrete, and absolute. Without sampling, quantizing, or quantifying, analog thought slips into many viewpoints at once.

On St. Vincent, Clark finds every possible way to play between fluidity and fragmentation. Her lyrics are melismatic, then syllabic. She fills space with strings, then horns. Her synth lines glide, then attack. The spectrum occupies vocal technique, instrumental arrangement, and production choices.

The vocal melody on “Rattlesnake” descends through neighboring notes before repeating a sharp, percussive “Ah.” “Birth in Reverse” opens with two guitars alternating in maximal dissonance. Their harmonics form a tritone—two notes split halfway through an octave—before resolving into a major key melody. On the first verse of “Regret,” guitar chords come short bursts. In the chorus, they disappear into glistening sustain. Over a quiet string arrangement, Clark sings, “I’m afraid of heaven because I can’t stand the heights / I’m afraid of you because I can’t be left behind” Her voice decays, and seconds of silence fill the space. Then the guitar bursts back in.

St. Vincent oscillates so quickly between analog and digital that to grasp on, we capture it at a given point, fix meaning in each moment. In the lyrics to “Digital Witness,” the technology critique is too obvious. In its sliding bassline, the critique is too subtle. When Clark suggests “I can’t show you / You can’t see me,” perhaps this indeterminacy is what she means. The only way to hear the full spectrum is by letting Clark fly between the two registers, feeling the oscillations cycle between two notes so rapidly that they form a single tone.

Before Clark takes the stage in Boston, the house music fades to silence. A computerized voice rises above the crowd: “Greetings, fellow analog witnesses. To maximize enjoyment of this evening’s entertainment, please refrain from digitally capturing tonight’s experience. Thank you, St. Vincent.” The audience cheers.

As Clark walks onstage, a few audience members take out their smartphones. They take single snapshots—indulgent transgressions—before putting their devices away. By the time Clark begins to sing “Rattlesnake,” she has a captive audience. A modular synthesizer walks bass notes underneath her voice, warbling and uneven. Clark and keyboardist/guitarist Toko Yasuda stand mostly still, moving their heads and arms in small, discrete bursts. They shuffle their feet when they move across the stage, and glance to the side in perfect synchronization. Digits and limbs move deliberately, their direction careful and considered. Through “Digital Witness” and “Cruel,” two of St. Vincent’s most danceable songs, Clark and Yasuda remain robotic. In line with the on-stage choreography, the audience moves minimally.

Following the opening trio of songs, the band pauses and a spotlight falls on Clark. Instead of bantering with the audience, she speaks deliberately. Her tone soft and poetic, she gestures outwards. “I can feel you up here,” she smiles. “It’s sort of like I already know you.” She feels cold, almost predetermined.

As St. Vincent continues, the show warms up.  On “Huey Newton” and “Bring Me Your Loves,” Clark’s guitar tone rips through the room. Her motion becomes fluid, and the performance feels emotional, raw. Clark sings “Prince Johnny” from a tiered pedestal, and as the strings taper off, she rolls down the steps.

Towards the end of the set, “Northern Lights” rises in crescendo. Clark repeats herself over different harmonic formulations, leaping octaves. Each word extends over multiple notes. Her voice is slippery, hard to pin down. As the energy peaks, Yasuda takes a theremin solo. The instrument squelches and squeals, sliding through tones. It never falls on a distinct note.

The audience at the House of Blues moves in fits and starts. In both sets, heads nod, fix themselves still, then nod again. Arms remain crossed. The crowd drifts between flow and fixity. “We perform our identities in the analogue and digital realm,” Clark writes in a guest piece for The Guardian. Really, though, we perform in all the places in between. When I ask Herndon about reconciling divides, she asks a question back: “We don’t receive information in these neatly packaged, quarantined environments, so why should we tailor our work in that way?”

Placing two artists on a bill together always invites contrasts. We pick points, we sample, we compare. Clark is x, Herndon is y. But what happens if we stop sampling and allow divisions to collapse into each other? We might find that instead of pinning viewpoints and fixing meaning, we let our thoughts oscillate rapidly from pole to pole. Ideas glide through frequencies like a theremin sweep.

TRISTAN RODMAN B’15 squelches and squeals.

For more thoughts on the tension between academic and popular music, using technology as a creative material, and the gestures of performance, read the Indy’s  full interview with Holly Herndon.