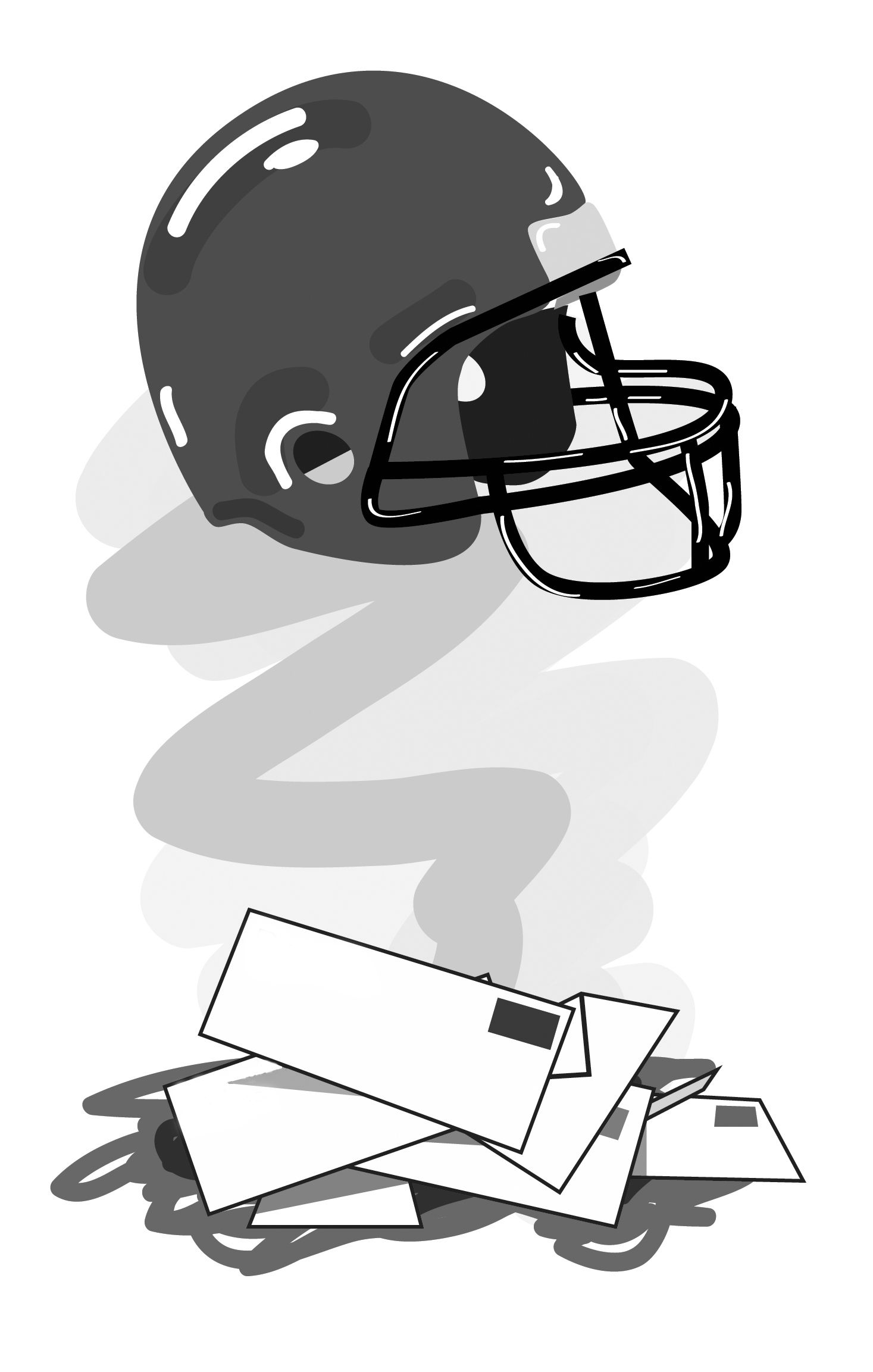 Dylan Moses is 6’1”, weighs nearly 215 pounds, runs a 4.46 second 40-yard dash, and has a 35” vertical leap. These are NFL quality combine numbers, so it’s no surprise he has eight scholarship offers, many of them from top football programs. In his highlight film, which has over a million views on YouTube, he awes with his combination of strength and speed. There’s one play where he actually picks up a blocker Blind Side style and throws him at the ball carrier, who crumples to the ground. Pause the video at any moment, and you see a battlefield of strewn bodies. Dylan Moses stands untouched, looking like Hercules.

There’s little doubt Moses will be a great college player—perhaps, one day, a great NFL player. As a running back, he has a knack for finding holes and a great change of pace on his cuts; as a linebacker, he has a natural sense for the development of a play. Nearing the end of the school year, media outlets from local Baton Rogue newspapers to ESPN flock to interview him. Such a bright future. So much potential. Everyone wants to ask Moses about his transition to the next level, if he can handle the pressure, if the attention is getting to him. He is, after all, in the eighth grade.

Moses has monetary value to whichever school he chooses. He’ll presumably help them win football games, which then makes them money, and in return, he’ll receive an athletic scholarship. It’s a trade—the school makes millions, Moses gets an education—but one that is increasingly being viewed as unbalanced. Moses’s value to the school, the pundits argue, is more than the value of his scholarship, so perhaps he should receive a portion of the money he’ll generate. Joe Nocera even proposed allowing coaches to bid on recruits. How to properly compensate athletes is the question in college sports right now, and it’s being argued from the newspaper to the courtroom.

But the reach of this question is limited. Pay-for-play only has relevance for major programs like the ones recruiting Moses, the best of the best. Of 228 Division I schools analyzed in an Indiana University study, a mere 23 have profitable athletic departments, all of which are in major conferences—the AAC, ACC, Big Ten, Big XII, Pac-12, and SEC. The other 205 lose money. Although it may seem fair to pay athletes from revenue-positive programs, almost always football and men’s basketball, it doesn’t seem economically feasible given that the department as a whole is losing money.

But there’s another way to consider this dynamic between university and athlete, and one that can include departments profitable or unprofitable. Moses is a once in a lifetime athlete, and if he continues on his current trajectory, he’ll be playing on Sundays in 2020, making millions. But he might not. Maybe he doesn’t fulfill his potential, or maybe he gets injured. Each year, there are roughly 5,000 Division I basketball players and 15,000 football players, most of whom will, as the NCAA advertises on TV, “go pro in something other than sports.” And this is the significance of the education a scholarship provides: it provides the ability to be successful in something other than sports. A scholarship has immediate value in the amount it would otherwise take to go to school, but it also has value in the increased financial opportunity a degree provides post-graduation.

The argument to pay players assumes that the monetary value of the education is less than the money the athlete makes for the school. Most of the proposals, thus far, have been to make up the difference with money. Paying players may help them financially in the short-term, but a pay-for-play solution does nothing for them once they graduate. Considering how few players will ever play professionally, a more meaningful solution to this value problem would be to increase the value of the education itself.

It is here that we find the real problem. Coaches want to win, institutions want to make money, student-athletes need to learn, and thus far only the first two have been realized. Graduation rates for student-athletes are below 70 percent. Grades are handed out in “athlete friendly” classes. Division I football and basketball players spend nearly four times more time on sports than class.

It’s easy to think that this is all an institutional problem and not a people problem. But this diagnosis is incomplete, because it’s forgotten about the student-athletes themselves. Something is happening on a personal level that is making these hard-working athletes apathetic students.

A student begins high school in the midst of identity formation. And one of the defining decisions a high school student makes is whether to attend college or not. If so, four hard years of preparation follow. Homework must be completed, tests taken, extracurriculars fulfilled. Perhaps the decision is made following the guidance of a teacher, satisfying parental expectations, or imagining a new and better life. Regardless of the reason, the decision to attend college is an affirmation of an identity that requires a certain amount of academic success. And the process of getting in—the years of hard work—is not only meant to distinguish between good and bad applicants, but also to strengthen an identity as a student.

By the time Dylan Moses was 14 he already had a college scholarship. It’s not guaranteed—he can’t officially sign until later in high school—but he understands he can keep his scholarship offers by continuing to perform on the field. In the mid-2000s, the University of Oregon sent their top recruits comic books in which they were the protagonists, superheroes, leading the team to championships and collecting personal accolades along the way. High school athletes are asking “who am I,” and recruiters have answers ready for them. The recruitment process, like the college application process, not only distinguishes between good and bad athletes, but also strengthens an athlete-first identity.

John, a student-athlete who wished to remain anonymous, was first contacted by college recruiters in his sophomore year of high school. “I had coaches calling me telling me they were going to follow me and thought I had potential,” John told the Independent. Soon he was featured in newspapers and sports blogs and received his first scholarship offer. By the time he was a senior, John said, he was one of the best players in his high school’s history and had committed to play at Brown. “Everyone knew me as an athlete. My senior year highlight film had a couple thousand views on YouTube. That’s a couple thousand more people than ever read any essay I wrote for school. … I was going to an Ivy League college, and it was all because of sports.”

John’s identity formed around these experiences: an athlete first, a student second, and he hadn’t even played a game in college yet. He came to college with the same mindset that had thus far made him successful. He explained, “When I got to college, I wasted my first couple years. I worked hard in the gym and barely at all in class. Sports had gotten me to where I am now, but for almost everyone, that stops after college. Sports can’t get you a job or make you money. I realized, for the first time in my life, I needed to be more than an athlete. I needed to take advantage of the opportunities sports had given me.” He started studying hard and raised his GPA. “It wasn’t a work ethic thing,” John said. “Sports taught me to work hard. It was changing what I thought was important.”

This identity doesn’t just form in high-profile athletes like Moses, or in major-money sports like football and men’s basketball. A recent article in The New York Times explored early recruiting in girls' soccer, often before high school. Pay-for-play is a solution for a small number of athletes in a few sports at a couple dozen schools. A far-reaching, systematic solution fairly compensating athletes must start with value of the education, not the value of revenue of ticket sales and TV contracts. Surely, the school can help once students get to campus: shorten practices, limit away games, raise academic standards. But solutions that start on campus would miss a major part of the problem.

I pushed John on when his identity began to form around athletics. He paused and thought, a lifetime of athletic achievement flashing before his eyes: “When I got recruited, it was the first time sports were more than just a game.”