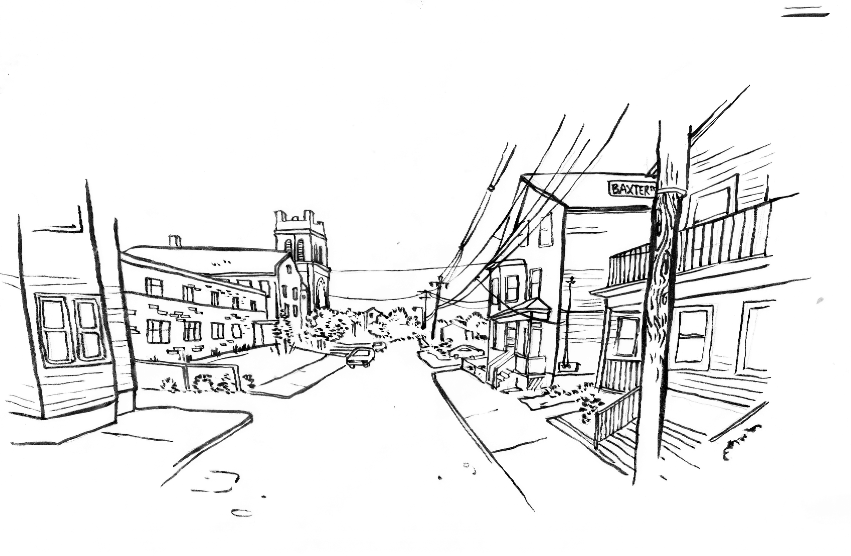 On Martin Luther King Jr. Day 2014, the candidates for Rhode Island governor and Providence mayor gathered in a softly sunlit room in Lower South Providence. Rick and I left campus about 12:30. We biked down Angell until we hit downtown, stopped to make conversation with a group protesting the arrival of Peggy Cabral (controversial Dominican TV host and widow of former Dominican populist leader Jose Francisco Peña Gómez) and then we got onto Broad Street. Our destination: The Institute for the Study and Practice of Nonviolence, 265 Oxford Street. In honor of Martin Luther King Jr., whose principles could be seen pasted to the walls of the institute, the candidates had agreed to sit on panels and answer questions about their policies toward nonviolence. It was the first time the politicians would be sitting and speaking side by side in public.

“Hey, you guys know where you’re headed?” a cop driving in an unmarked sedan said to Rick from his passenger seat window as we biked down Broad Street on the way to the event.

“Yeah, the Peace Institute, it’s just down there right?” Rick said back. We looked at each other, confused about his concern for us at midday on a busy street.

“Oh good. And you know where it is? Just down there a few blocks, off to your left?” he asked.

“Alright—you don’t want to make a wrong turn in this neighborhood!” he said, and then drove off down the road.

We had only been on Broad Street for three blocks and there was nothing particularly threatening about our environment: we saw people waiting at bus stops, shops with colorful awnings, commercial corridor banners and houses on the side streets.

We arrived about five minutes after talking to the officer. The Institute for the Study and Practice of Nonviolence is housed in an old Catholic convent that looks like a lot of the other French Gothic churches built in Providence when religious communities grew over time around the city. It is thin, vertical in its mass distribution, and made of a deep red brick that makes it stand apart from the painted wooden houses that surround it. Built in 1929 by designer-architect team Murphy, Hindle and Wright, the convent was part of St. Michael’s Catholic Church, which also had a school and a rectory. The church hed been built for the largest Irish Catholic community in the state at the time. After the convent closed but before it was the Institute, the building was a state rehabilitation center called the Talbot House.

A few police officers stood out front, including our friend from the sedan, who later told Rick his name was Perez (Lieutenant Oscar Perez, commanding officer of Providence Police Districts #2 and #3). I wanted to ask him why he stopped us, why his concern was so great that he pulled over on a busy road. I should have asked him on the spot because I didn’t get a response from his office when I called later. He stood with a group of colleagues and smiled a big smile at us and nodded hello as we locked our bikes and got in line to enter the front door. A woman standing at a table in the front entrance asked us to sign in or put a business card in the jar. A giant paper notepad had a handwritten welcome on it.

The room for the panel was packed. Young campaign staffers mingled with journalists, activists, and elderly members of the community. Before I knew the building used to be a convent, the room just felt like a place of religious gathering. Like a lanky rectangle, the room was narrow but had high ceilings and windows that stretched along the two long walls. It reminded me of the synagogue in my hometown. Those walls were painted sea green, a color that’s supposed to calm the mind. Sitting at the table in the front of the room were three of the five candidates for governor: Todd Giroux, the business-minded radio talk show host from Bristol, Angel Taveras, the current mayor of Providence and a child of the south side, and Gina Raimondo, the current state treasurer and the candidate with the largest campaign fund. To their left were the two moderators for the event: Ian Donnis, political reporter for Rhode Island Public Radio, and Bill Malinowski, longtime writer for the Providence Journal. Teny Gross, the Institute’s executive director, introduced the panel and asked the audience to keep their questions away from the root causes of poverty and to focus instead on policies aimed at nonviolence. A woman sitting in front of me prepared her phone for live tweeting.

The moderators asked various questions about how the candidates intend to promote nonviolence in the state. Responses were capped at two minutes, which kept the gubernatorial panel to a neat hour. If I had to sum up each candidate's responses in one paraphrased sentence, it would be as follows: Giroux, wearing a suit and revealing more nervousness about public speaking as the event went on, said, “When I was a kid, I learned karate and punched the school bully, and then the principal shook my hand.” His other points about investing in the state, unfortunately, were overshadowed by statements like these. Taveras, speaking in his soft tone of trademark gentility, said, “Violence is a cancer.” He said that a few times. Raimondo, grinning for an estimated 85 percent of the presentation, said, “As a mother, I want to invest in nonviolence.”

All the candidates gave specific numbers for money they would direct toward nonviolence policies. Raimondo said she would invest in statewide comprehensive pre-kindergarten. Taveras said he would earmark $2 million for a summer job initiative. Throughout the Q&A, the costs of not preventing violence surfaced and resurfaced: $94 million annually for state gunshots, $5 million for one fatal shooting, and $432,000 for survivors of a gunshot wound. There were 105 people shot in Providence in 2012. 13 homicides, 276 weapons offensives, 117 robberies with firearms, and 2010 aggravated assault with firearm in 2013. You do the math. Last week on January 26, three shootings took place in one night in two different parts of the city. “Providence man, 24, is city’s first murder victim of 2014,” the next day’s Providence Journal read. It is expected. It has begun.

Sitting in the crowd was Sister Ann Keefe, an elderly nun who co-founded the Institute. She received a round of applause during the introductions. “She’s amazing,” Gross told The Indy later. “She’s founded more nonprofits than any Ashoka [a global social entrepreneurship incubator] fellow.” She’s a legend in the local community, having joined St. Michael’s Church in 1982. She has been battling brain cancer for the last year, and stood up and sat down slowly when Gross mentioned her by name.

The mayoral candidates numbered five: (sitting from left to right) Brett Smiley, a local business owner and former chair of the Providence Water Supply Board (whom I spotted sitting inconspicuously with the public at a city planning meeting a week later), Lorne Adrain, former chairman of the R.I. Board of Governors for Higher Education, Michael Solomon, current city council president, Jorge Elorza, former housing court judge, and Christopher Young, a man whose simple biography you cannot find on too many local news websites because he seems to have spent most of his last three decades running for public office. Brett Smiley said he planned to tax gun sales by an additional 10 percent and use the increased revenue to fund nonviolence programs. Adrain expressed a desire for more police officers in the city. Both Solomon and Elorza spoke about the need for nonviolence training in schools. Christopher Young went straight to the issue that appears to have dominated his previous campaigns, saying that abortion is a basic form of violence as well as a product of racism. Young also mentioned that he helped paint the walls of the very room we stood in, which Gross told me later, simply was false.

Leaving the event, Rick and I saw the smiling Lieutenant Perez again.

“You two know the way home now?” he asked us.

KAT THORNTON B'15 calms the mind.