a conversation with James Mark, owner of north restaurant 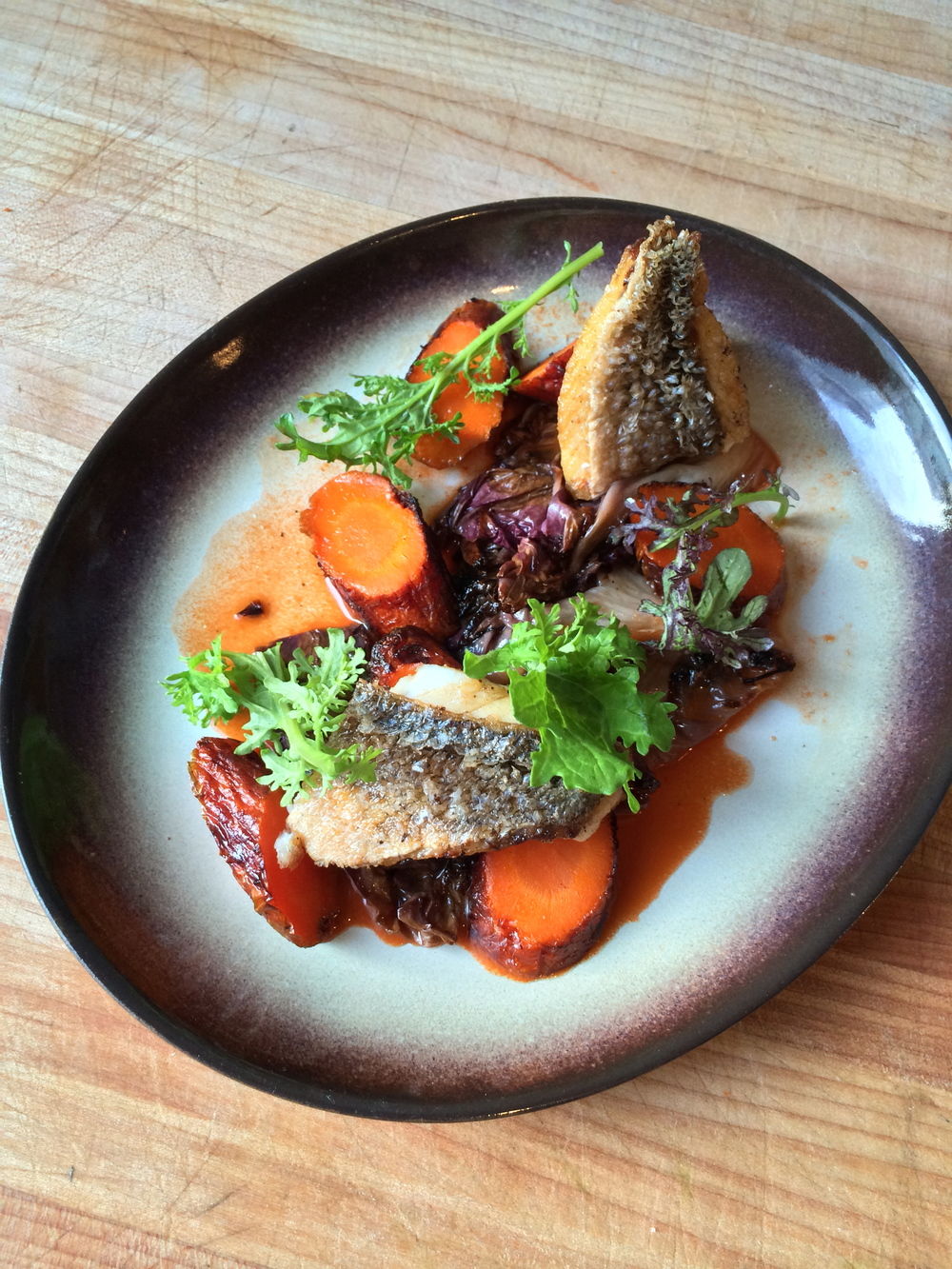 Carpenter and West Fountain Streets on Federal Hill meet in a large, triangular opening called Luongo Memorial Square. The darkness of the square is interrupted every night by the glow of a small, electric blue sign that radiates north from a storefront window. Inside is a dim but lively restaurant, people cozying around a few tables. A frozen drink machine filled with bright pink slush churns at the end of the bar, a bowl of strange candies sits on a narrow counter near the door, a bartender who doubles as a hostess looks up from the whole Surryano ham she’s slicing to welcome customers.

I went to north for the first time last fall. On the constantly-shifting menu are dishes like drunken and stir-fried mussels with sake, Japanese turnips, and radish; fried chicken with herb salad and grapefruit chimichurri; slow-roasted root vegetables with harissa, sunflower seeds, orange, and carrot juice. Some dishes are personal-sized, some group-sized, but all are meant to be shared. The offerings change a bit most nights, with dishes appearing, disappearing, and reappearing based on the availability of products. I got the spicy cauliflower and tried to make the perfectly-roasted flowerets last as long as possible.

James Mark, 27, opened north a year and a half ago. After graduating from Johnson & Wales, Mark helped open Momofuku Ko in New York City and its subsidiary bakery, Momofuku Milk Bar. Mark returned to Providence a few years later, where he worked at Red Fez and Nick’s on Broadway before deciding to open north. I sat down with Mark at north before business hours to discuss the restaurant, his road to it, and its place in the city of Providence.

The College Hill Independent: What’s a typical day like at north?

James Mark: I get up at 8:30 every morning. At least two of us are here by 9:00, me and another manager. We do a little bit of shopping in the morning. We buy noodles, or we get whatever random things we end up needing to get. I’m at the Pawtucket Farmers’ Market every Saturday. And then we pretty much prep from 9:00 until 5:30. It’s a very intense restaurant, because we’re busy, and we don’t have a lot of room back there.

We have staff meal at 4:30, which is not a fancy restaurant staff meal. It’s a bunch of vegetables, a starch, some sauce. We eat it standing up because we’re too busy. And then we cook from 5:30 to midnight. We don’t stop, we never close early, we do it seven days a week. The bar stays open till 1:00. We try to get out of here by 1:30, 2:00. We do a very intense cleaning every night. I try to get to bed by 2:30, and then it’s back up at 8:30. Every manager is five days a week. We get two days off. All my cooks and interns work four days in the kitchen, and then one day on a farm. I pay for them to do that because when I was a cook I had a couple jobs where I had to do that on my days off, and I developed a really good...

The Indy: Understanding of the product?

JM: Understanding of the product, but also a responsibility for the product. Even silly shit, like onions and potatoes and garlic and stuff that you don’t think about on an everyday basis. How much effort goes into growing that stuff. Cooks oftentimes have a tendency to be kind of careless with things. So I send them to a farm, and they realize that you have to work really fucking hard just to get that onion, just to get that celery, just to get that parsnip. And we don’t serve a lot of meat because it’s expensive to buy well-raised meat. Not that we’re opposed to doing it; it’s that we can’t afford it. Everything on the menu’s cheaper than 15 dollars, and that’s a hard rule that we have. Occasionally we go above that, and there’s a couple more expensive dishes that are meant to feed two or more people. But we want this place to be affordable for people.

The Indy: I’m interested in your cooking jobs, like the one where you were sent to farms on your days off. Where would you say you honed your craft?

JM: I guess where I really learned how to cook was in New York. Momofuku Ko is a really intense restaurant. It’s 12 seats. They only feed 24 people a night. There’s no choices. It’s a fixed menu. It’s six years old now, and this was before a lot of [that kind of restaurant] became big in New York. There wasn’t a lot of staff. It was just a sous-chef, a chef, a cook, and me, who was kinda the prep guy. And a dishwasher. With that crew, we got three stars in The New York Times, and we got two Michelin stars. It was crazy. There was a very steep learning curve. I came out of school, had been cooking a long time, but I had a lot of bad habits that were really detrimental to what I did there.

The Indy: You threw yourself right into the fire, so to speak.

JM: Unknowingly. I thought I’d be able to handle it, but the truth is that they helped me out a lot. After that, I helped open Momofuku Milk Bar, which is a bakery. It was actually a really good failure on my part. I went over there to be their bread baker. I worked there for a year, and I just wasn’t ready to figure it out. I wasn’t ready to be in a position where I had to do everything myself. I wasn’t building systems that anyone could do; I was building systems that I had to do myself, and I had to be there working from 11 at night ’til 4 in the afternoon the next day. Then I’d pass out on the train, have a two-hour commute, wake up in bumfuck Brooklyn, and have to be back at work in half an hour. That type of thing.

It was systematic failure, and the bread never took off. It never made profit because it wasn’t done in a smart way. I was trying to run the bread program of this bakery that I was the only one baking in, and it doesn’t make sense. You can’t do that by yourself. So I left there. I got really burnt out. My girlfriend at the time left me, I was sleeping on the floor of the basement on cardboard boxes, working ridiculous hours. I didn’t want any of that anymore, not even cooking. I was over it. And so I moved back up here to take a break. I came back because Providence is a really fun little city. I really fell in love with everything about it again. You can have a job that you work really hard at but still have time away from it. 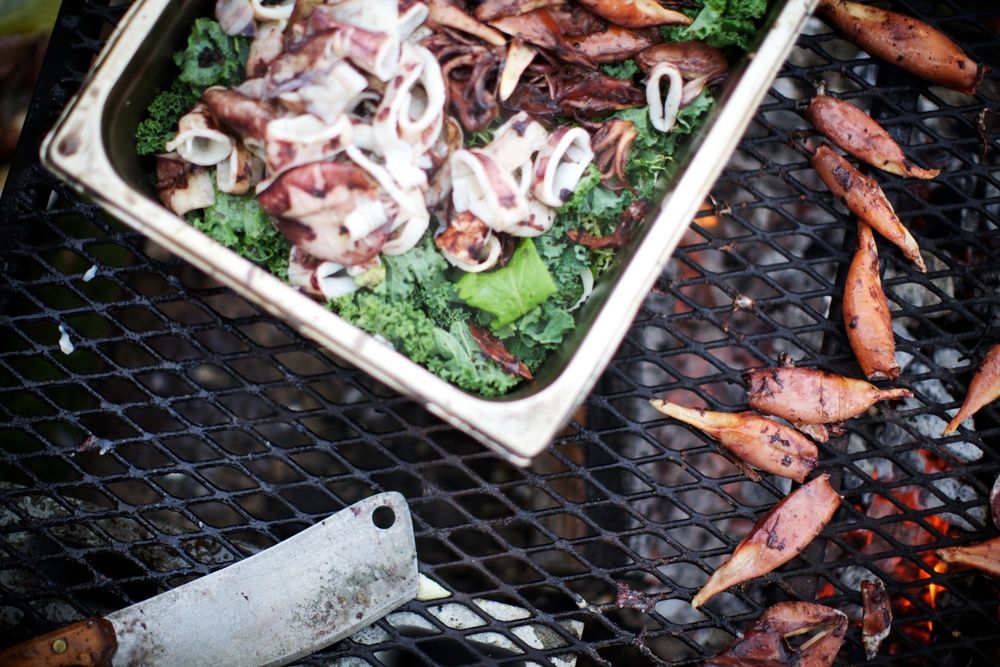 The Indy: Recently Providence has gotten more attention as a food city than it has in the past. What do you think has contributed to that?

JM: There have been great restaurants in this city for a really long time. The biggest difference has been that there are food systems in place now that weren’t in place five years ago. A great example is Kingston Trawlers, or Brown Family Seafood. These are two new companies that started two years ago, and before that the fish and seafood systems here were not good. The best seafood you could buy came from Boston, which is ridiculous. Point Judith is 35 to 40 minutes away, and that’s one of the biggest commercial fishing ports in the country. And so these two companies started up, and the product is the best you’ll ever see in your life. They sell a fish that I would buy in New York City for 10, 12 dollars a pound for 4 or 5. And the quality’s better, honestly. That’s a big advantage Rhode Island has going for it now, that the quality of product you can get is so high. So there’s always been great restaurants, but the quality of product that they’re all using is way higher.

The Indy: What’s the relationship between those suppliers and the nightly changes to the menu?

JM: It’s the idea of being a seasonal restaurant. A seasonal restaurant doesn’t mean that you change your menu four times a year. A seasonal restaurant means that there’s weeks that, like, I run out of Savoy cabbage. There might be a farmer out there who has it, but right now I can’t get it. So that dish comes off the menu. Our fisherman is a great example of that. He goes out when the weather’s good for fishing. If it’s shitty out, then he’s not going fishing. So sometimes we go two weeks without getting a fish delivery from him. But if he doesn’t go out for two weeks, I’m not mad. He knows the ocean better than I do. I’m not going to get mad at him for not taking the risk of going out in a storm. I don’t need fish that badly. That’s why we print our menu every night. Everything’s more fluid here than at a traditional restaurant because we don’t have systems like, ‘Oh, we have a fish monger, and this fish monger has cod, so we have cod on our menu the entire year.’ We don’t do that.

The Indy: Have these systems, the quality, and the prices all made owning a restaurant in Providence easier than it would be elsewhere? What’s been difficult as a small business owner in Providence?

JM: Every city has its challenges. Providence’s biggest challenge is its population. There aren’t a ton of people. The restaurant’s busy, and we’re small, so it’s great, but we have our slow days, too. And then also, a large chunk of the population—probably a quarter of it—is all students that are very transient. They’re here for four years at the most, and not four straight years. They’re here for nine months out of the year, or eight months out of the year, and they’re very centralized on the East Side, where there’s a ton of restaurants catering towards their experience. If I were there and didn’t know what was up, I wouldn’t leave the East Side. I fucking love East Side Pockets. I’d eat there every day. It’s delicious. But there’s a lot more to the city than just that neighborhood.

I don’t advertise. We donate fifty cents from every dish to the Rhode Island Food Bank or the Amos House. It’s a really important part of what we do, but that’s our advertising budget. We rely on word of mouth. We rely on putting out a great product, and hopefully we get to a point where people can start to truck down here. I went to school here, and I didn’t really like it because I didn’t find any places that I loved. Nothing that made me think, ‘Wow, this place is awesome. I wanna be here so that I can go to there, and there, and there...’ So you need to build those places that people love going to. And, you know, you need jobs and all that other crap, but I have no control over that. I leave that to the big dogs that know what they’re doing. All I can do is try to create a restaurant that people are really psyched on, a reason they might want to stay in the city. 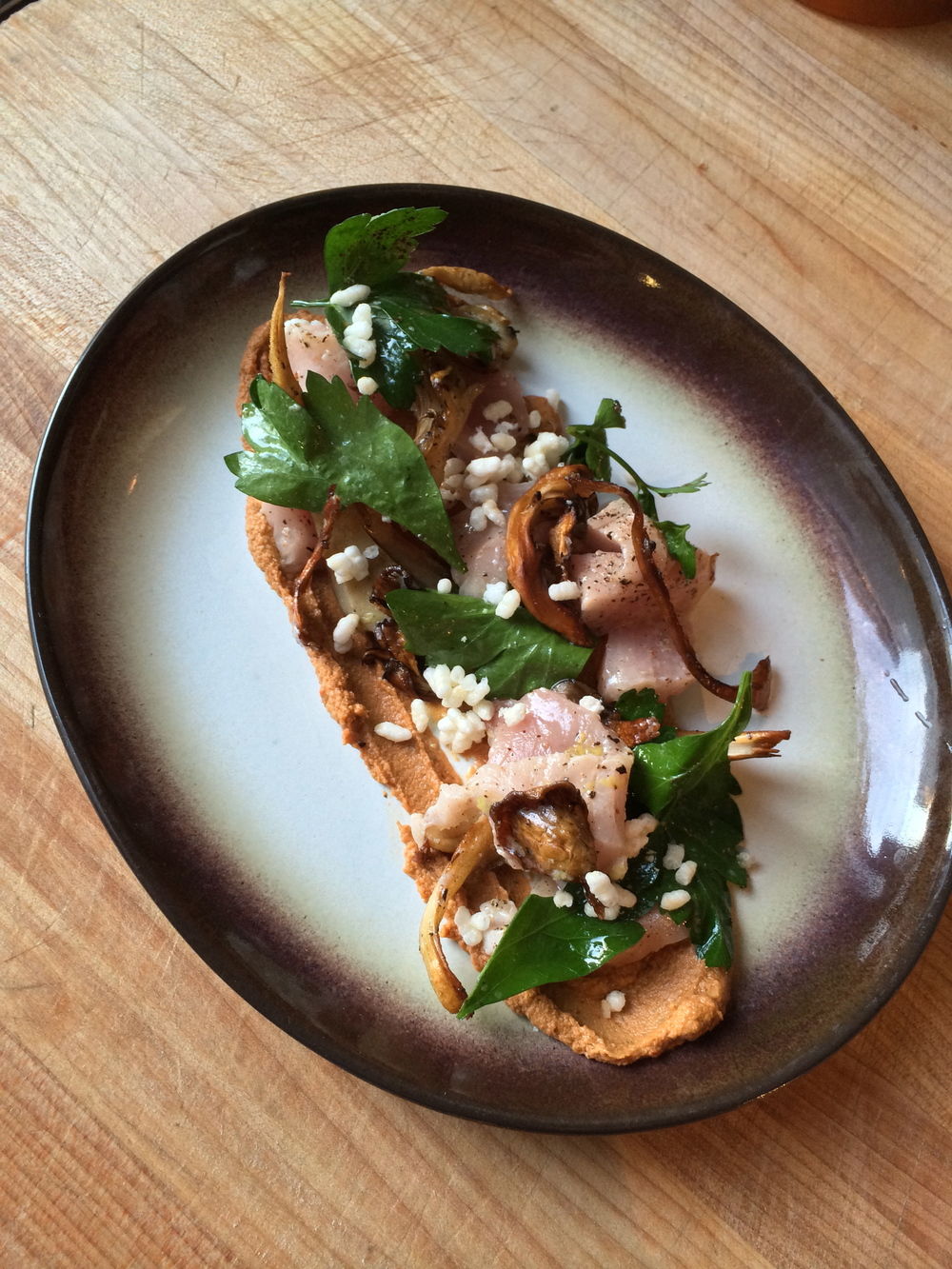 north is located at 3 Luongo Memorial Square. It’s open seven nights a week from 5:30 to midnight. Menus are posted daily on the restaurant’s website, foodbynorth.com.