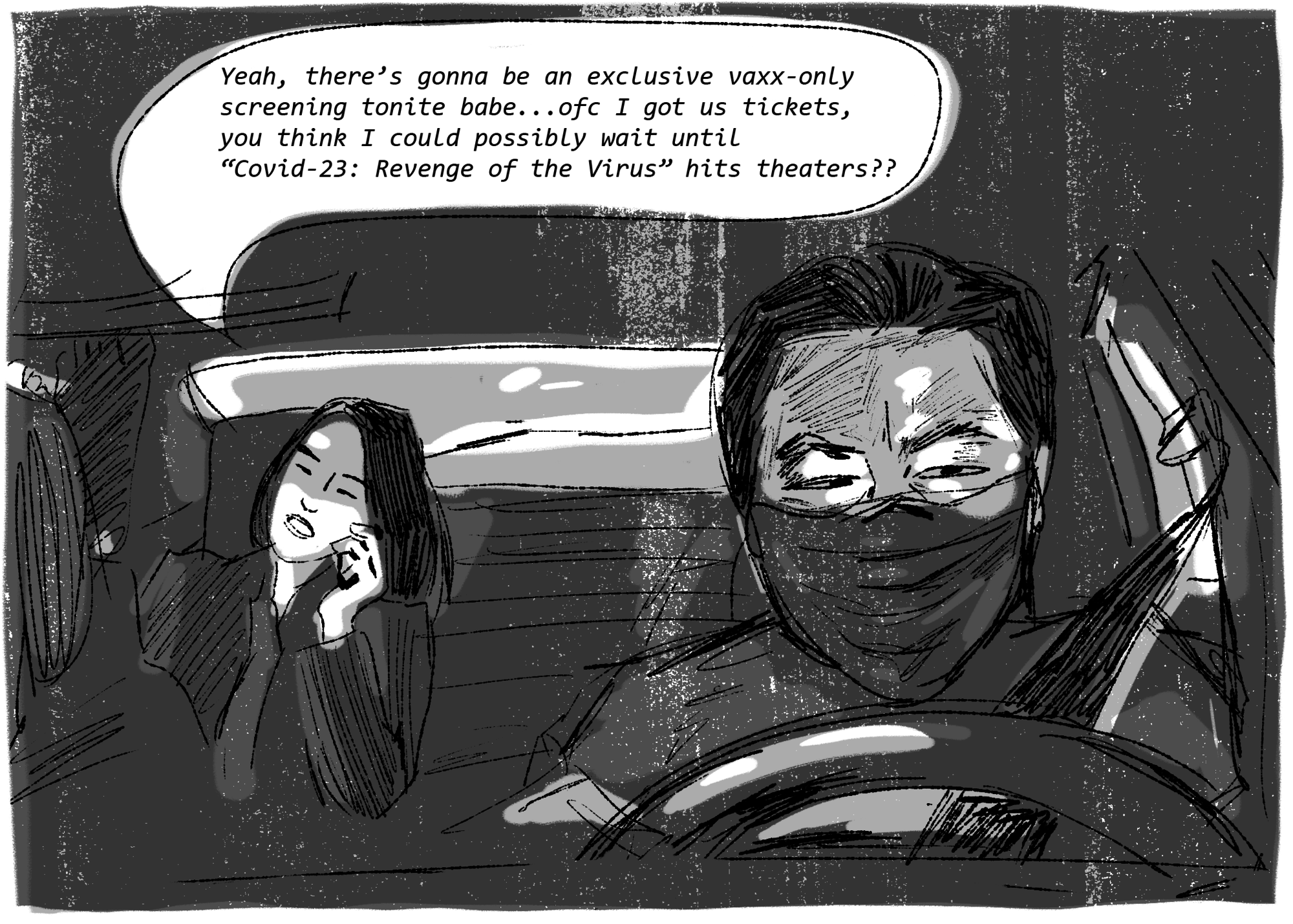 Banana bread be damned, Michael Bay is here to make things just a bit less bearable. The Transformers director, notorious for his big-budget visions of cataclysm, has decided to give the same treatment to the very real global disaster that is the COVID-19 pandemic. Songbird, an upcoming Bay-produced film for which a first trailer was released at the end of October, takes as its premise, “What if this all got wayyyy worse?”

The movie (yet to be given a release date) promises to project us into a fourth year of worldwide lockdown, at which point the “COVID-23” virus has mutated into an even deadlier pathogen, turning America into a YA-novel-esque dystopia. Martial law has been established and the infected are being forced into quarantine camps, or “Q-Zones.” Thankfully, the movie’s description tells us, “a few brave souls fight back against the forces of oppression.” (Intentionally or not, this film seems likely to be a favorite among anti-mask conspiracy theorists). These brave souls include young courier Nico, played by Riverdale heartthrob KJ Apa, whose ‘quarantine gf’ Sara faces expulsion to a Q-Zone when she is believed to have contracted the virus. The trailer suggests the prototypical contemporary disaster movie—replete with loud droning noises, glitchy visuals, and hot people, dripping in sweat, darting around—except for the fact, of course, that much of it takes place over video call.

The question of “does anyone really want to watch this right now?” was apparently of no concern to director Adam Mason, who started working on the script with co-writer Simon Boyes in March soon after the pandemic began to shut down the United States. Nor was the consideration “is it safe to make a movie right now?” a particular worry: shooting began in July, halting only after the production received a “Do Not Work” order (eventually rescinded) from SAG-AFTRA when producers were reportedly not so transparent about safety protocols. Songbird is now proudly declaring itself “the first feature film to be made during COVID-19 in Los Angeles.” Hollywood perseveres!

Unsurprisingly, online backlash to the trailer was swift. Many have called the film out as tone-deaf exploitation of a tragedy which continues to claim thousands of lives each day. Though the film’s creators likely imagine Songbird as inspiring in some way, its framing as a spectacular thriller is primarily an invitation to be entertained. The story appears to take wholesale the conditions of our present, unimaginatively exaggerate them, and throw in an attractive forced-apart couple for a dollop of emotion. Who knows, maybe there’s more than meets the eye. But with a premise so unabashedly clickbait-y (and Michael Bay at the reigns), this Indy writer is doubtful.

Bay and company are not the first in the entertainment industry to fictionalize the upheavals of 2020. Coronavirus television has included Netflix’s Social Distance, NBC’s Connecting…, and Freeform’s Love in the Time of Corona, all of which attempt to reflect actual day-to-day experiences from the pandemic, treating their subject matter with decidedly more sensitivity than Songbird (though receiving mixed reviews). More pandemic content is likely to come soon, whether we want it or not. With the apocalyptic action movie territory now staked out by Songbird, one wonders what other genres Hollywood might mine for COVID-inspired tales: contact-tracing mysteries? Coronavirus in space? Teens finding love and discovering themselves in the virtual halls of Zoom high school? In any case, hopefully future productions can at least come up with details more creative than “COVID-23.” — AV

The $224 Million Fight for Your Thai Food

“Liberals are going to end this year by naming ‘essential service workers’ Time’s people of the year but do nothing to improve their material conditions,” @melstonemusic tweeted on April 6. The tweet proved prophetic; less than a week later Time published an issue titled “SPECIAL REPORT: HEROES ON THE FRONT LINES.” Despite the yard signs and status updates for those keeping the country running, on Election Day, California voters passed Proposition 22 to erode the rights of app-based delivery drivers with a 58 percent majority. The proposition classified gig workers as independent contractors rather than employees, a win for companies like Lyft and Postmates and devastating loss for all of their drivers. It made a nice magazine cover, at least.

The proposition’s passage overrides the 2019 California Assembly Bill 5 (AB-5), which extended employee classification to janitors, nail salon workers, construction workers, and gig-economy drivers, among others. The bill prompted predictable tantrums from Uber and Lyft, who, like any good union buster or petulant child, swiftly threatened service suspension, increased prices and wait times, and a loss of flexibility for drivers.

In reality, the threat of lost flexibility is nonsensical: worker schedules are wholly independent of their status as employees, and 70 percent of drivers work more than 30 hours per week, the equivalent of full time in California. Proposition 22 simply opens a backdoor for these companies to avoid complying with what the Mercury News aptly termed “the fundamental employment laws that apply to all other industries.” As Californians slip into poverty and are forced to work despite COVID-19, this exemption denies workers key employment benefits such as, I don’t know, unemployment insurance, access to safety equipment, and paid sick leave. A study from the Labor Center at the University of California, Berkeley found a variety of loopholes in the proposition suggesting worker earnings could be reduced to a meager $5.64 per hour after Prop 22’s passage, a far cry from the minimum wage of $14 per hour that will begin in California this January. For good measure, the initiative also requires an unprecedented 7/8ths vote in both the state Assembly and Senate to amend it in any way.

Corporate supporters of the measure, including Uber, Lyft, Instacart, DoorDash, and B-list YouTuber GloZell Green, outspent their opponents with a $204 million campaign that dwarfed the $20 million efforts of Prop 22 opponents, who were supported mostly by labor unions. The result? The most expensive ballot measure campaign in California history. The Prop 22 fight has also served as a sandbox for new corporate political tactics as these companies seized the opportunity to reinvent the pass-something-clearly-not-in-the-public-interest playbook. Uber’s app displayed a menu to drivers which read “Prop 22 is progress” with two options to dismiss the notification, “Yes on Prop 22” and “OK.” DoorDash distributed 150,000 takeout bags emblazoned with “Yes on Prop 22” to restaurants free of charge. Instacart prompted drivers in one grocery store to “retrieve one Prop 22 sticker and insert and place it in your customer’s order.” Public relations firms working for the campaign even distributed voter guides from fake progressive voting organizations with names like “Feel the Bern, Progressive Voter Guide,” “Council of Concerned Women Voters Guide,” and “Our Voice, Latino Voter Guide,” according to KQED. Meanwhile, ads published by the campaign claimed 4 out of 5 drivers favor prop 22, a number produced from a study of merely 718 drivers. How convenient.

The proposition placates drivers with a series of surface level benefits like a wage floor and healthcare voucher based on number of hours worked, notably only applied to “engaged” driving time, which excludes time waiting for rides or deliveries. It’s difficult to praise a proposition that enshrines corporate profitability from unpaid labor derived primarily from marginalized communities (78 percent of drivers are from communities of color). This Indy writer is left wondering why Californians continue to trust obviously self-motivated tech companies to have even the most basic regard for their drivers. Et tu, DoorDash? — LG