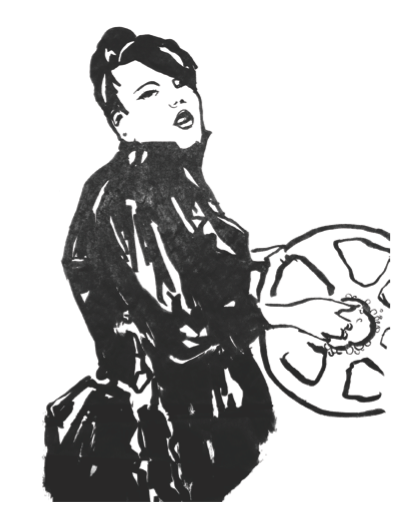 Last month, Lily Allen emerged from a preemptive retirement to box with the entertainment industry in the best way she knew how: topping charts with a provocative new single, “Hard Out Here.” Now 28 with two kids and a home and a husband in the English countryside, Allen fancies herself a sort of pop diva veteran. Returning to the studio after a three-year hiatus, Allen’s music no longer has the “lethargic, teenage” quality that characterized her early success and appeal, she told the Guardian. Now, she says, “It’s about ownership and empowerment.” With the help of director Christopher Sweeney, Allen brought her new song to life in a satirical music video that dealt precisely with issues of ownership and empowerment—but not in the way Allen, or Sweeney for that matter, had intended. When Allen’s feminist message gets lost within her racially exploitative music video; bloggers, music journalists, and even Allen’s backup dancers have taken it upon themselves to fill in her theoretical gaps.

“Hard Out Here” is the lead single of Allen’s forthcoming third solo studio album, Is It Scary. The lyrics, which she wrote herself, have all the necessary components of what might otherwise be a compelling (if rudimentary) feminist critique of the music industry. Allen expounds on body image, “You should probably lose some weight/ ‘Cause we can’t see your bones,” and double standards with a glittery wink: “If I told you ’bout my sex life, you’d call me a slut/ When boys be talking about their bitches, no one’s making a fuss.” She ultimately reminds her listeners of the permanence of injustice and inequality in the business, hence its chorus: “It’s hard out here for a bitch.”

What could have been a rare opening in pop culture for Allen to speak authentically about the rampant sexism of industry executives is buried and bulldozed by Allen’s deeply confused satire. The video begins with a promising sequence of Allen on an operating room table, a squabbling white male executive overseeing her liposuction. “How does a woman get like this?” he asks. Allen responds, “I’ve had two babies.” Stripping off her surgical robe, Allen joins a group of mostly black dancers who twerk in slow motion, fan money, and pour champagne down their breasts like “real” video vixens. Allen remains relatively upright throughout the video. And unlike the women around her, she’s dressed conservatively. Her manager pops in and out of scenes, directing Allen and her dancers to bend over like this, eat a banana like this, wash rims like this, all of which is admittedly funny, playing on top-down industry demands made otherwise invisible. But the humor’s lost when the distancing between Allen’s relatively motionless, covered body and her gyrating, undressed backup dancers becomes more and more apparent, culminating in Allen’s mock spanking of a dancer bent over beneath her.  Why Allen, as a pop artist, is troping on hip-hop imagery is never fully resolved.

Response to “Hard Out Here” has been explosive and racially divided. Rolling Stone hailed it a “true feminist anthem through and through.” Vice called it “courageous, hilarious, and a timely critique of the music industry.” Supporters of the video—coming from mostly white authors and audiences—embrace Allen’s “Hard Out Here” for what Allen, in her own words, intended it to be: “a light hearted satirical video that deals with objectification of women in modern pop culture.” They cite Allen’s overt reference to Three 6 Mafia’s Oscar-winning song “Hard Out Here For A Pimp,” her jab at Robin Thicke’s balloon-crafted genital product placement in “Blurred Lines” (Allen rewrites her own version), and supposed nod to Miley Cyrus’s crazed twerking at the VMA performance earlier this year, as all contributing to a fully constructive and witty social criticism.

For as far as this defense of Allen’s feminist logic is propelled through the cyber space, it’s quickly undone by women writers of color like Mia McKenzie of Black Girl Dangerous, who view Allen’s work as “yet another video of a white woman performer using the bodies of black women as props.” In this view, Allen fails: though she operates under the guise of satire, the images of hyper sexualized female bodies persist. It’s Allen’s race and class privilege that allows her to take advantage of the debate. Critics of the video also point to its false equivalences. Allen preaches “don’t need to shake my ass for you cause I’ve got a brain,” equating ass shaking with stupidity, but then immediately cuts to shots of black women twerking.

To fully affect the cultural criticism intended in her satire, Allen would have not only needed to be willing to expose herself, but also to enact the tropes she’s purportedly working to reverse. It should be Allen scantily clad, “[shaking] ass”--not her dancers--that would secure the logic here.  Instead, she leaves the dirty work to a team of predominantly black women; who, without a mic, have no chance of asserting their own agency or intention in the project. With their bodies as the enactors of hypersexual performance, their bodies are the ones assumed to be sexually available. The dilemma approaches catastrophe at the hands of a white artist like Allen. In distinguishing herself from her dancers in dress and in movement, she perpetuates narratives of sexual availability and luridness that have long stigmatized black women in the music video industry; and positions herself as a less “available” more empowered woman.

Caught in the crossfire, Allen turned to Twitter to defend herself in a post entitled “Privilege, Superiority and Misconceptions.” In it, she writes that the video had “nothing to do with race, at all.” She explains, “If I could dance like the ladies can, it would have been my arse on your sceens….me being covered up has nothing to do with me wanting to disassociate myself form the girls, it was more to do with my own insecurities.” Allen continues, saying she would “not only be surprised but deeply saddened if I thought anyone came away from that video feeling taken advantage of.” She concludes with the twitter handles of her dancers, telling critics to ask “the girls themselves.”

Seliza Sebastian, the most vocal of the crew, took to her own defense. She tweeted, Confirming her consent in participating in Allen’s video, backup dancer Seliza Sebastian tweets “Im a dancer/actress! Its 1 job! In this vid we r playing CHARACTERS of what the industry often want women 2 be like.” Out of context, Sebastian’s defense resonates more closely with the analysis mounted by Rolling Stone and Vice. She admits to the self-reflexive nature of Allen’s project and her willingness to participate in it. When couched within the framework of hip hop feminism, Sebastian’s defense takes on a different meaning entirely.  Hip hop feminism, “best understood as a means of reconciliation and reclamation on the part of young black women in the U.S. trying to create a space for the themselves between whiteness and/or academically sanitized version of university-based feminism,” (based on the definition of Whitney A. Peoples) would take Sebastian’s performance at face-value and laud it as empowered. Her later tweet, “I do not feel exploited. I did a JOB as a professional,” could evidence this sort of hip hop feminist reclamation.

Of course, artists are rarely fully agent individuals; they are the faces and businesses of a massive capitalist endeavor, and their expressions are influenced by the investments of the industry marketplace. But even when artists do try and take on their own feminist projects, their renditions often work against each other. Allen tackles body pressure and sexualization of female artists while Miley Cyrus defends sexual rebelliousness; Katy Perry says, “I’m not a feminist but I do believe in the power of women” while Beyoncé complains to GQ that “men define what’s feminine. It’s ridiculous.” Expanding social and other new medias obscure focus, producing and then proliferating these contradictions at the public level. As a result, there is a much lower investment in setting parameters and settling beliefs about what precisely feminism is, and how its different forms can co-exist in pop culture. What the debate surrounding Allen’s video did accomplish was how the privileging of feminism v. anti-feminism debate eclipses the critical component of race. Without the privilege of the mic, the intentions and priorities of the dancers are rendered silent. The black feminist and hip hop feminist response to Allen’s video reveals that race was always there.