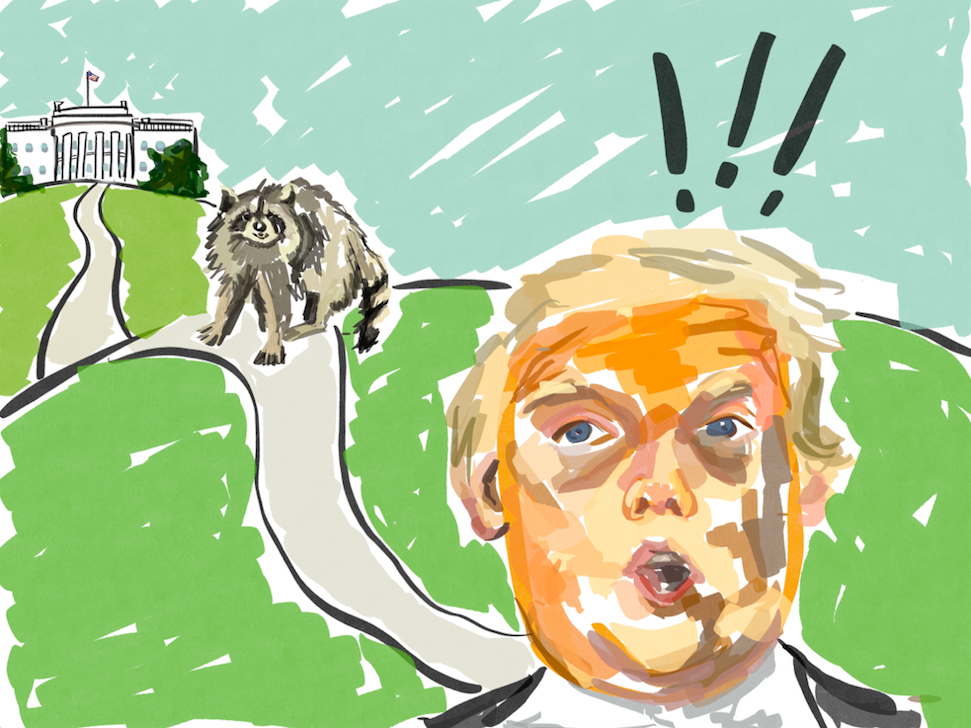 RACCOUP D’ÉTAT AT THE WHITE HOUSE?

Raccoons invaded the White House lawn this week. Though they’ve mostly been stepping on telecaster cables and sniffing at gear bags, on Tuesday, October 5 one of the sneaky crawlers interrupted CNN senior Washington correspondent Joe Johns during an early morning live shot. Johns’ leg must have looked like a delicious dinner, because the raccoon tried to attach itself to his pants. Johns turned around, screamed, and frantically threw a nearby stool at it. The animal scampered off.

“I felt something on my leg and the first thing I thought was that it was a camera man from another network,” Johns reported to CNN after the incident. “I looked down, and it was a raccoon!”

On Twitter, Johns reported that no animals were harmed during the confrontation, but now it’s evolved into animal vs. human warfare. Law enforcement officers are trying everything to get rid of them—sand bags, dogs, traps, even broomsticks. Nevertheless, the racoons have persisted.

And of course, humans have made the actions of these animals inherently political. The Wayne Dupree Show tweeted, “Things have gotten so bad for the fake news crew over at CNN that even the White House raccoons are lashing out at them.” A more liberal tweeter asked, “Could you please go after a Fox News reporter as well when you get the chance?”

With raccoons running amuck, flies finding habitation in Vice President nominee Mike Pence’s hair, and a bat-traced illness wreaking havoc across the nation, it’s hard to not think about how animals and humans live and breathe on the same planet every day. Humans are territorial and get angry when animals ‘invade’ what they perceive to be their own space.

So, are these animals landing on our heads, attacking our reporters, and contributing to the spread of diseases because we’ve encroached on their spaces? Are they subconsciously getting back at us for our buildings, our parks, and our city centers? What will be the next big act of animal revenge?

This Indy staff writer thinks the solution is finding ways to coexist. The Coolidge family, for instance, had a pet raccoon named Rebecca that accompanied them on vacation and joined the first lady in the White House Egg Roll. Teddy Roosevelt nursed a badger and allowed it to run wild in the house, Benjamin Harrison bought a wily goat named Old Whiskers for his grandchildren to play with and he also had two opossums—Mr. Reciprocity and Mr. Protection.

President Trump, however, seems less interested in pursuing peaceful coexistence with anyone—human, raccoon, or other. In fact, he’s the first president in 100 years not to have a dog! Over the course of his presidency, he’s rolled back regulations for an Obama-era animal welfare rule, removed thousands of animal abuse records from the United States Department of Agriculture website, and lifted a ban on the import of sport-hunted trophies from elephants—with his track record, it’s hard to imagine him even so much as petting a dog.

So, perhaps this raccoon invasion isn’t an accident after all. Perhaps this is an organized and coordinated attempt from the animal kingdom to invade the territory of the man sitting in the Oval Office. After all, raccoons are known to eat trash… —NS

What has a dwindling population, sharp teeth, one degree of separation from Hugh Jackman, and is no longer protected by the powers that be? If you answered either:

B) the collective readership of the College Hill Independent

… then you would be right!

On October 8, after a years-long internal review process, the United States Department of Fish and Wildlife decided that wolverines did not need any governmental protection, declining to add them to the growing lists of species considered ‘threatened’ or ‘endangered’ by climate change. This is a major win for the anti-wolverine forces in D.C.: Big Snowmobile, Big Oil, and Big Agriculture. It is a major loss for small mammals.

This week, in seemingly unrelated news, the Indy’s printing schedule was temporarily halted. The decision comes not as a cost-cutting measure; rather, it attempts to limit a potential vector of COVID-19 spread. While the public health reasoning of the Students Activities Office cannot be questioned—the science is quite clear on the fact that only papers with an Ephemera section can facilitate spread—it still comes as an added insult to the wolverine populations of North America, who rely on the physical distribution of newspapers to stay informed.

The fine people of the online forum WildFact tried to warn us this might happen. In a 4 AM post from December of 2016, a forum user and self-described “Grizzly Enthusiast” under the name @brotherbear offered us a reminder: “Wolverines have a history of having to watch their back.” Clearly, in a dog-eat-dog world, wolverines have to look out for themselves. Maybe that’s why they fight animals 10 times their size, in forests and in forums. They draw large enemies online. One user, @polar, a “Polar Bear Enthusiast,” casts doubt on the thread that names wolverines “the most badass carnivore on the planet.” Au contraire! ... cries @polar, at 5:02 AM on a Sunday, “I am already afraid that title belongs to my favorite, the polar bear.”

In real life, wolverines are just as ambitious. WildFact abounds with stories of large animals turned to prey by Gulo gulo: moose, caribou, lynx, and bison among them. User @pantherine opens the forum with a written account of a lone wolverine managing to disperse a pack of wolves by killing one: “Then, no doubt, the other wolves, seeing their comrade overpowered and done to death, had turned away and left the scene of battle.”

A wolverine killing a wolf!? That’s like a tangerine beating a tank or an aubergine overwhelming an auberge. The difference in size alone is baffling. It’s hard to bet in any fight against a competitor that punches up so well.

But the wolverine did not come out on top in this particular battle. In the game of rock-paper-scissors that is the great outdoors, it looks like wolverines beat wolves, wolves kill civil servants, and, in turn, civil servants obliterate protections for wolverines.

How could the Department of Fish and Wildlife justify denying protection to a species that most scientists say is in trouble? Government officials point to the overall magnitude of wolverine populations to argue that, in effect, they can survive a bit of a hit. It’s true; there are plenty of wolverines, even if their population is on a downward trajectory. If wolverines ran their own weekly paper, the masthead would, for the moment, appear full. The problems run a little deeper though. Shrinking snow across the continental United States belies the fact that one day, the bottom might just fall out. Already, most wolverines aren’t digging the three snow burrows per semester that they expect. The survival of a wildlife species (or a newspaper) is grounded in long term viability and buy-in, something a one-time analysis of membership cannot capture.

It might be easy to write off attacks on something that 99 percent of the population never ever interacts with as unimportant, but we shouldn’t simply turn our backs on everything that needs a little bit of help just because it is defensive, territorial, and a menace to ranchers. Take it from us over here at print media. It’s a long slippery slope, and it ends in our… fellow journalists… at the BDH printing newspapers while we cry for help. —LN