A Conversation with James Goldstein 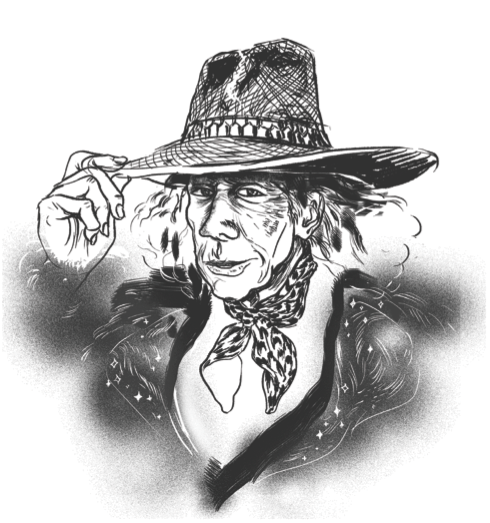 James Goldstein condenses every popular conception about Los Angeles into one human body: He lives in a glass house atop the Hollywood Hills, dresses like a rock star, and nobody seems to know his real age. A courtside season ticket holder for both the Lakers and the Clippers, Goldstein can always be found at Staples Center, twentysomething babe on his arm, schmoozing with basketball fans you’d expect to meet only in dreams—Kanye West, Lil Wayne, Drake. His studded leather jackets and matching tight pants stand in stark contrast to the rest of arena’s star-drizzled sideline. It’s not easy to make Jack Nicholson P’12 look like an everyman.

Goldstein’s signature item is a snakeskin hat, always worn just high enough above the eyes to look suave, not sinister. At a recent Lakers game, he sported a black t-shirt with a rhinestone-encrusted etching of the hat that sat atop his head. Last season, Miami Heat star Dwyane Wade showed up to Staples Center wearing a white tee with Goldstein’s face screen-printed in black. Wade, Goldstein says, made the shirt himself.

A lifestyle like Goldstein’s requires significant financial commitment. Using figures from the LA Times and the Orange County Register, the face value of courtside season tickets for both LA basketball franchises is somewhere upwards of $450,000 a year. This estimate wouldn’t even begin to factor in Goldstein’s regular presence at NBA playoff games or the travel it takes to get there. Nobody spends more money annually on NBA tickets. Goldstein also attends over 200 fashion shows each year, jetting to every corner of the globe. When you’re rich enough, time travel becomes the everyday.

Goldstein rarely turns down press. He’s been featured in everything from Architectural Digest to Paris Match. I phoned Goldstein in late November, battling a fuzzy connection in the hills of Los Angeles. His drawl matched the hat I imagined him wearing, low tones at odds with his Wisconsin upbringing. After some initial confusion, he agreed to take the call. Mr. Goldstein, it seems, was expecting the interviewer to be a woman.

We talk here about the NBA dress code, his origins in fashion, and architectural collaboration.

The College Hill Independent: You’re the world’s biggest NBA fan. How did you get started with the sport?

JG: I started watching games in the early ‘50s, when the typical size crowd was 1,000 people. Ninety-nine percent of the players were white, always American born players. Even when I was in high school, I was writing my term paper on the NBA. I was the statistician for the Milwaukee Hawks—the Hawks of Atlanta were then playing in Milwaukee while I was in school. I worked for the radio and TV announcer. I was totally hooked on the game. At that time, I was following football and baseball with equal fervor, but as the years went by I dropped out of those two sports completely and devoted all of my sports attention to basketball.

The Indy: These days, there’s a lot of overlap between basketball and fashion. A number of years ago, the NBA put a “business casual” dress code in place. You pay such close attention to style and image—how do you feel that has changed the way players dress off the court?

JG: Well, I hate to see rules about the way people dress. At the same time, I never thought that the hip-hop style of dressing was very attractive. I’m happy to see that the players are starting to get interested in fashion and starting to express themselves in the way they dress, which is what I do myself. All in all, I think it’s been a successful program.

The Indy: Fashion is certainly part of the entire presentation of persona. For you, who is the best-dressed man in the NBA?

JG: I don’t have one player specifically that I would call the best dressed. I like the players that are willing to wear something that’s a bit out of the ordinary, which again I like to do myself. Russell Westbrook is one of my favorites, but there’s some other ones as well. Tyson Chandler is one.

JG: He’s a good friend of mine, and I hate the uniformity of sports announcers on television—throughout all sports. I admire Craig very much for stepping out and being different. As far as the clothes that he wears, I wouldn’t wear them myself. I’m not a sport coat, blazer, and shirt type of person. Nevertheless, I like the fact that he tries to set a style.

The Indy: Definitely. His style of dress is something you rarely see on the sidelines.

JG: I once said to Bill Walton—who represents, from his earlier days, the anti-conformist mentality—“Why are you wearing a suit and tie when you’re a TV announcer? It’s not your look.” I said, “Why don’t you wear your own style?” And he said to me with a shocked look, “They would fire me if I did that!” Well, I don’t think that would’ve happened. I think he eventually lost his job because of the way he announced the games, not because of the way he dressed. But at any rate, he was afraid to do it.

Goldstein is a frequent presence at major fashion shows, where he also always sits front row. After years of careful experience and observation, he made the leap into design: James Goldstein Couture debuted at fashion week in Milan this September. The inaugural collection of womenswear, “Rock N Chic,” features multiple pieces with full-length zippers directly down the center. Menswear is still in the works.

The Indy: Your style is so cohesive and identifiable, but how did it start?

JG: As a young boy, I think I was influenced by my father who was an associate with a department store and had me dressing up at a young age—trips to New York and things like that. As I became a teenager, I always tried to be one step ahead of my classmates in terms of dressing with the latest color, the latest fads, and so forth. In my early twenties, I went to Paris for the first time and was really impacted by the style of the people that I saw on the streets.

As time went on, I just got more and more interested—started going to fashion shows and couldn’t get enough. Went to more and more, along with trying to wear the latest styles from the top designers in Paris and Milan. Everything I did was just for my own pleasure. I never expected to become famous for it, but that’s what’s turned out.

Even with a packed travel schedule, Goldstein keeps one of Los Angeles’s most visible homes. The Sheats/Goldstein residence, designed by John Lautner and nestled in the Hollywood Hills, is the residence of Jackie Treehorn in The Big Lebowski and Mr. Munday in Charlie’s Angels II: Full Throttle. Its jagged lines and glass panes open up onto the cityscape beyond. Inside the house is a site-specific James Turrell installation, Above Horizon. The installation, what Turrell calls a “skyspace,” frames the sky as part of the built landscape. The house also serves as the location for 2 Chainz’s “Feds Watching” video, where the rapper sits on Goldstein’s living room sofa as models dance around him.

JG: I grew up in Milwaukee. My parents made sure that I saw a lot of Frank Lloyd Wright architecture. (He was from Wisconsin). One of my best friends from school lived in a Frank Lloyd Wright house a block away from me, where I spent a lot of time. I always, even at a young age, had a fascination for architecture. People used to predict that I was going to become an architect. I never formally studied, but I subscribed to all the architectural magazines and did a lot of traveling around the world and always made a point of checking on the latest architectural buildings.

Finally, when I decided to buy my first house after living in an apartment, and getting a dog who needed more space to run around, I started looking for a contemporary architectural house. Eventually, after two years of looking, I found the house that I’ve been living in for more than 40 years. I brought back John Lautner, who was a Frank Lloyd Wright disciple. Work has been going on here for more than 30 years, nonstop, there’s always been some project going on. And even though Lautner died in 1994, I continued on, trying to build things in the way that I think he would’ve done it.

The Indy: I actually grew up in a Lautner house in Los Angeles.

JG: He, unlike a number of famous architects, had no ego problem. He almost took it too far in the other direction because he never wanted to offer suggestions to me. He always wanted to hear from me first—my ideas, what I wanted to do to improve the house. Everything took a long time, but it always turned out right.

Additions to Goldstein’s home include a nightclub, a movie theater, a tennis court, and more space for clothing.