Refrigerators in the Future 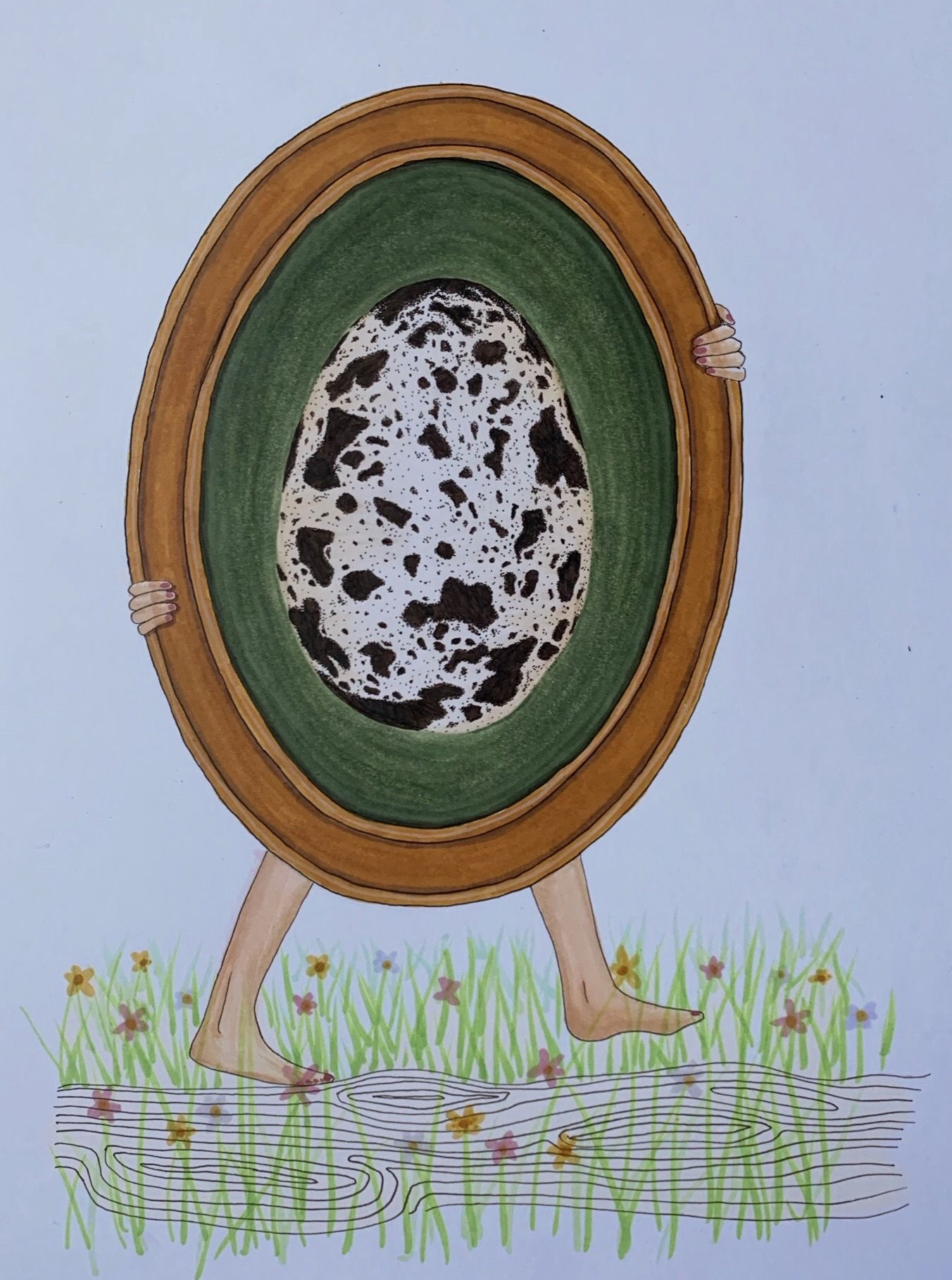 The house is ours for one month, the insides cluttered with wind meters and amphibian figurines.We eat the breakfast at the dining table while Cal assembles and disassembles towers from a bowl full of magnets. To get to her house the girl must cross the sunshiny grass. The girl carries a series of paintings from the concrete building through the meadow. The paintings are taller than she is, so they come to be objects with legs—a rose, an egg, a green paneled refrigerator, a bunk bed. After she finishes cleaning the refrigerator M pulls large pieces of cardboard from an accordion-fold closet and spreads them out on the floor. I ask her what she is doing; cutting out furniture, she tells me. The kids made two-dimensional cutouts of themselves after an X-acto knife safety lesson. M recalls the very same exercise, except on sheets of paper, not cardboard. There was no way of holding herself upright. The hope was for the paper cutout to become something like a best friend, a new sibling at the dinner table, but the issue of her double’s spinelessness limited the extent of their time spent together. M proceeded to roll the paper self into a tube, where she remains beneath her childhood bed. Cal brought a bag of gummy worms to M’s house and just as the rainstorm begins he empties them out onto the center of the open floor. Over the course of the day we take turns meddling with them, cutting them up into tiny pieces with the craft scissors lying all around. At one point Cal cuts off all of their heads and arranges them in a circle, raising one iridescent green close to my face, where I notice their eyes point toward one another in an evil, plotting way. As they grow smaller and smaller we lose them to the corners of the house. There are two ways to get back to the house: through the meadow or around it. Cal asks me a question that goes liquid halfway through. From far away he can see the line of rainwater that separates the meadow from the forest, and when he finally steps over it, he turns to look behind him. The outlines of the field begin to resemble something like a hexagon, and its surface—from this distance—has turned into vibrating. Rainwater draws the two screens closer together. In the middle of the night M is waiting for me (raincoated, rainbooted). Come this way. Beneath and beyond there is mud and then lake. Soon goose bumps smooth away. Cal unfolds a synthetic pink blanket which he carefully arranges over himself, securing each limb in the correct cut-out hole. He turns the hairdryer to full-blast, medium-heat, and culls the rain out of our hair. Tiny grey spheres slough off at the touch. Chalk is more like liquid than anything else, filling the canals in Cal’s fingerprints until they run smooth. I want to tell Cal that I’m sorry I fucked up the pie crust—I just got really nervous. You’re only as happy as your least happy kid. You are out of Land o’ Lakes; it is a luxury we need not live without, this is not, mind you, the Middle Ages. Is it about our bones? Milk that is — or is it entirely separate? I have read that all humans are lactose intolerant by nature, however fractional. Are we by nature intolerant of our mothers? Maybe milk, bones aside, binds us to our mothers. In the year 2018, a grandmother (European descent) pulls a yellow spritzer out of the fridge, holds her toast up in one hand and spritzes a thin yellow coating. She eats a turkey sandwich on her way out the door, holds the dog with her foot to keep him from getting out as gingerly she shuts it, and although I love her, I saw a fly inside the sandwich and did not say a word. What does this say about me? You are what you eat and if you eat an interesting word, maybe you will become one. A piri-piri tzatziki bolognese clafoutis jicama asparagus piece of cottage cheese. Quote: You might say, “James, I know our argument was a bad one, but we can get past it. I want you to know how much I love you. Please come home or call me right away.” Unquote. You might say, the wikiHow posits. You could, you might, maybe you should? Is it saying that at all? and Quote. When she talks of childhood spaghetti, she is transported to somewhere else entirely, and she hints at a half-cooked smile, a tilted parenthetical as if she’s the woman on the moon gazing down at me, but seeing nothing. I draw her a cartoon of a girl cooking spaghetti, spaghetti-lassoing the moon until the moon opens its mouth and eats the spaghetti like the Lady and the Tramp rocketing her up to the moon. Later I find the paper crumpled up in the trash. Frozen bagels are impossible to cut with a knife, we know this as bagel lovers. Two Bagel Biters, the original Bagel Guillotine, with a marketing strategy derivative of an obscure kitchen gadgetry infomercial. The same fonts, the step by step execution. I am a step-by-step executionist; she an all at once or not at all.