Notes on Race and the Politics of Fear in America 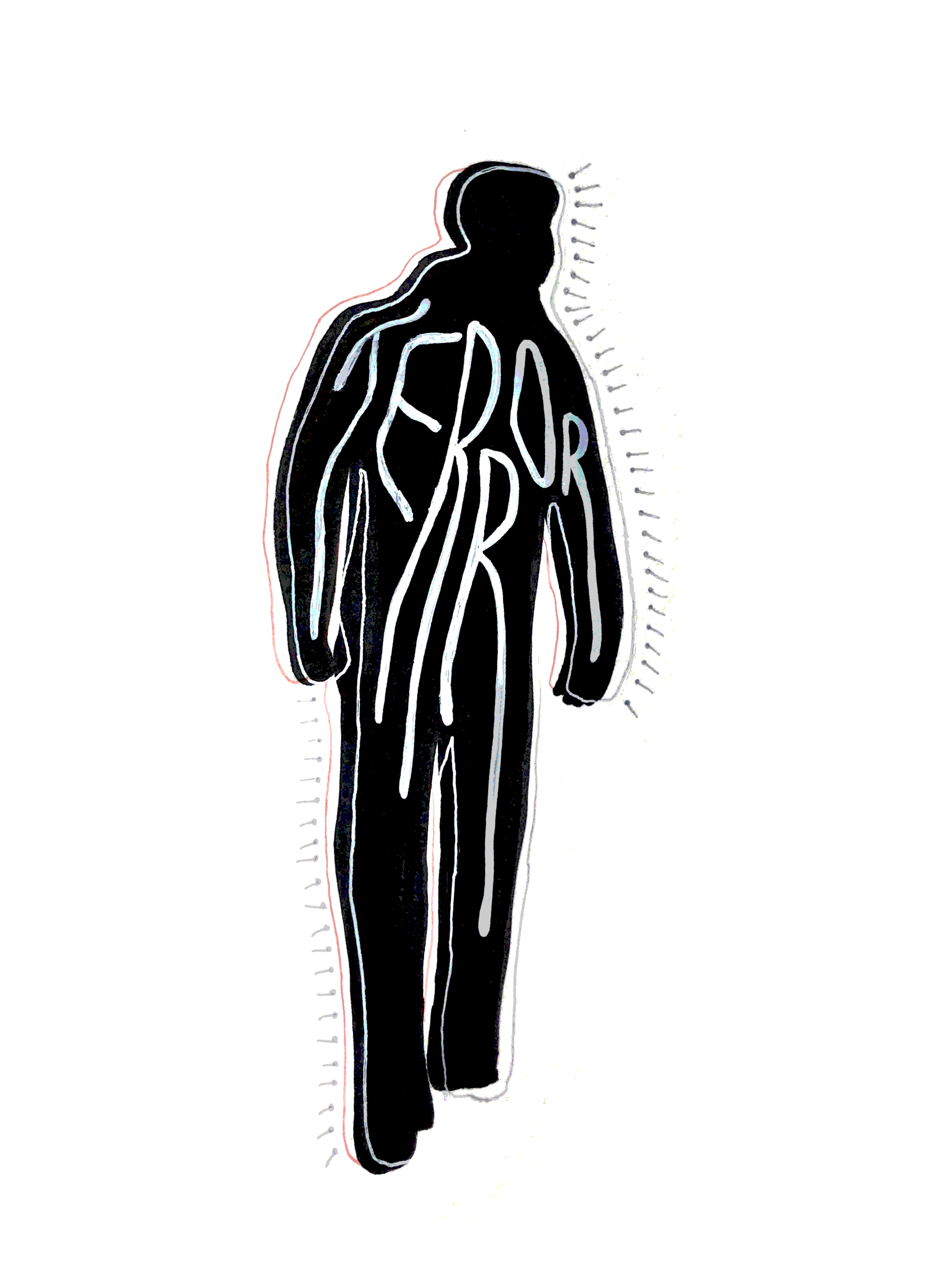 I, without a thought of conquest, find myself among a people whose culture controls me, has even, in a sense, created me.

When Barack Obama won the 2008 election, I was only eight years old. But I remember in an assignment for my third-grade classroom writing him a letter about how excited I was for him (he didn’t reply). I remember the Shepard Fairey “Hope” portrait of Obama in red, blue, and a beigey-white. I remember his slogan: “Yes We Can!”

Black voters turned out in throngs for Obama. It was the fight of our lives, and victory never felt better. The electric energy bounced through the halls of my school, spilling into the African diaspora communities in Central and Eastern Brooklyn. Obama, despite being Ivy League-educated and biracial, “became a symbol of black people’s everyday, extraordinary Americanness,” as Ta-Nehisi Coates aptly wrote in his Atlantic article “My President Was Black.” To my Nigerian family, Obama’s success was a confirmation of an illusive dream: Not only could my family learn English to survive living in America, but they could also communicate the intangible customs, thrive in any career, and ultimately master the system.

However, Obama could not be just a black president. Having a member of one of the most surveilled and policed communities in America ascend to one of the highest political positions did not preclude the suspicion that trails behind powerful black individuals. The initial seeds of distrust were evident in racially-charged conspiracies about Obama’s background, from the birther movement questioning whether he was American to unsubstantiated claims that he was a terrorist. It is not a coincidence that from the backdrops of Obama’s presidency, Donald Trump came to power spouting populist and nativist rhetoric. White low-income and working-class individuals in the Midwest had been feeling economically abandoned in a post-financial crisis era and its accompanying decline in manufacturing jobs. Trump was seen as the get-it-done-in-one hero that would highlight their plight. Why is it that despite Trump’s affluent background and enormous generational wealth, he was seen in such a favorable light by many forgotten Rust Belt workers?

As exit polls show, Donald Trump did overwhelmingly well with various categories of white voters (from the working class to the upper class, college-educated and otherwise). Trump’s campaign timing was impeccable. He revitalized a disillusioned sector of American voters and gave them a cause to believe in, just as Obama had eight years prior when he won Midwestern states such as Iowa and Wisconsin. For all the economic anxieties that Rust Belt workers felt, their cultural identification with Trump was a crucial factor of their support. Trump capitalized upon white, working-class fears to scapegoat foreigners. In doing so, he propped up and validated sentiments of white victimhood.

White victim ideology is the belief that white people are being discriminated against and that their rights are being violated. The fears that Trump’s supporters displayed were real. According to the Public Religion Research Institute, 83 percent of Trump supporters said the American way of life needed to be protected, versus 55 percent nationally. What exactly is this “American way of life” and who was threatening it in such a way that would warrant protection? Could it be abstract enemies of foreign influence? Perhaps. But given America’s constant self-image as a “melting pot,” the more present and daily threats are placed upon socially, culturally, and linguistically underrepresented communities.

Because white victim ideology obscures the enormous social and cultural capital white individuals hold in America, it perverts attempts to “reverse” a system that already favors white people. When this idea of white people being disenfranchised and overlooked is constantly repeated—when I say white people I mean the equation of vast groups “farmers” and the “Midwest” as being white—public support for the empowerment of people of color may diminish. White victim ideology fantasizes that a conspiracy-like favoritism shown toward otherwise underrepresented groups operates to the detriment of working-class white people.

This illusory minority favoritism lingers in conversations of secondary school or university admissions and employment prospects, where applicants are viewed as having unmerited advantages in the admission processes simply for diversity’s sake. Yet, the idea of minority favoritism selectively ignores the systematic oppression and economic subjugation that prompted the equitable policies. Take as an example the admissions processes into specialized high schools in New York City through the Specialized High School Admissions Test (SHSAT). These high schools are regarded as some of the highest-quality free secondary school options for New Yorkers. This year, one of the highest-ranked specialized high schools, Stuvyesant, offered just 10 spots to black students and 20 to Latino students out of a freshman class of 896 students. These numbers reflect a world in which tests such as the SHSAT—a test that adversely impacts lower socio-economic communities, which are disproportionately communities of color—are the sole admission basis. Yet, underrepresented groups are considered privileged in these instances.

White victimhood is not a novel idea. Sociologists have studied its growth in relation to the social determinants of white supremacist violence. White supremacy, in relation to the cultural phenomenon of the white victim, has been portrayed by the mainstream media as isolated, unusual, and extraordinary. Mass murderer Dylann Roof, for example, displayed a consistent, absolute lack of remorse for his ruthless killings. Instead, he felt “sorry for the innocent white people that are killed daily at the hands of the lower race,” he wrote in a manifesto.

When police officers fatally shot Michael Brown in 2014, I had just started my freshman year at a predominantly white school. At this time, as #BlackLivesMatter began to pick up speed, it seemed like every other week there was another death reported on the news. The Ferguson riots sparked debates on my campus about the spirit of activism in general. The notion of Black lives mattering seemed to be agreed upon on my campus, but there was always the rebuttal of blue lives mattering and the need for self-defence. In these discourses, white terror was present not only in the subject of abuse of authority in policing units—given that the riots exposed how Ferguson police had massively violated the civil rights of their Black constituents—but it was evident in the debate. There was a policing of fear and of how it is demonstrated within the black activist movements. Anger and rioting do not have to be viewed in isolation; acknowledging the fear behind them does not suddenly shift power dynamics to the Black activists.

However, before the gun violence of white supremacists began this discourse, white terror permeated the everyday interactions between Black Americans and American society.

White victim ideology dangerously suppresses the reality of white terror. At first glance, white terror may appear to be the grossest and most perverted sense of white privilege—years of entitlement and simultaneous victimization coupling in an explosion of violence and rage. But white terror goes beyond privilege and beyond entitlement. The power dynamics of white terror speak to behavioral instincts of fear.

“There is a great difference between being the first white man to be seen by Africans and being the first Black man to be seen by whites… [the white man] arrives to conquer and to convert the natives, whose inferiority in relation to himself is not even to be questioned; whereas I, without a thought of conquest, find myself among a people whose culture controls me, has even, in a sense, created me,” wrote James Baldwin.

Baldwin’s feeling of being “created” or defined underneath the white gaze gestures to the history of economic exploitation that led to the creation of race and ethnicity to justify such exploitation. However, in the village Baldwin visits as an outsider, his first thought is not about how to classify the people he meets. Rather, he is focused on being perceived and defined as a stranger—as the Other.

While Baldwin’s experiences take place in Europe, the epicenter of Western colonization, it adds to the discourse of white terror by highlighting the power that subtle actions such as a look can have. To be seen and registered as black in America is too often seen as a tension between power and submission.

In my elementary and middle schools, submission was drilled into my head every day.Whenever I was at a table my hands were to be folded on top of my table, I had to sit criss-cross applesauce on the ground, I absolutely always had to have my black shirt tucked into my khaki pants held up by a belt that could only be black or brown. If students were determined to have violated any of the school’s long list of rules, they would receive a demerit. Four demerits was a 45-minute detention; eight demerits was an hour-and-a half detention. As excessive as it was, perhaps the discipline could have been tolerable were it not for the unfortunate fact that the student population was 98 percent Black or Latino, while there were only two Black teachers in the whole school. Something about this squaring up was so wrong. It felt at times like the disciplinary systems were more important than the actual detention;, I was always afraid of how any little slip-up would stain my record and land me in detention or suspended.

Because terror signifies “extreme fear,” white terror means the extreme fear felt by Black America under a political system based in white supremacy. White terror has been normalized to the extent that it may sound radical to even call it terror. In this regard, it is woefully downplayed in the minds of white people. What would otherwise be categorized as menacing every time it occurs—is regarded as an ugly, unfortunate remnant of American history. White terror is not a relic of an ugly legacy. It is an existing and self-sustaining force of itself. Because of how omnipotent yet intangible white terror is, it has been described in ways that have not been put together to form a larger picture. Perhaps, the literary tradition of the white gaze has most clearly captured the essence of white terror.

Whiteness in America has long been socialized as the default standard for all positive attributes, as demonstrated by a 1940s doll experiment that studied the psychological effects of segregation on Black children. African-American psychologists Kenneth and Mamie Clark discovered that Black children associated white dolls with prettiness and amicability, amongst other preferences.

However, in her essay, “Representations of Whiteness in the Black Imagination,” cultural critic bell hooks inverts the usual study of the white gaze to interrogate how white people are, instead, viewed by Black people. bell hooks points out that the Jim Crow era and the ensuing de-facto segregation created communities and neighborhoods where having white visitors would be unusual, especially given that such communities possessed weaker infrastructure and amenities. Thus, Black communities perceive white visitors as “terrorists” to the space—associated with ulterior motives, usually financial incentives. This is not an attempt at reverse racism; rather, this is the validation of any anger felt by Black America.

“I hear the chorus of the innocents screaming, ‘No! This is not true! How bitter you are!’”—but I am writing this letter to try to tell you something about how to handle them, for most of them do not yet really know that you exist,” James Baldwin wrote in an essay to a hypothetical, future nephew. Similarly, I offer no solutions or remedy to addressing white terror—for I have none. Instead, I offer thoughts as just one Black girl living in America.

So then, white terror does not only revolve around white supremacy and police brutality; it is the potential that white individuals have to enact force and easily wreck havoc on the lives of Black Americans. White terror becomes more than a conversation about white privilege when one considers the morbidity of living a life that necessitates the political and economic subjugation of Black and brown bodies.