The Music, The Message 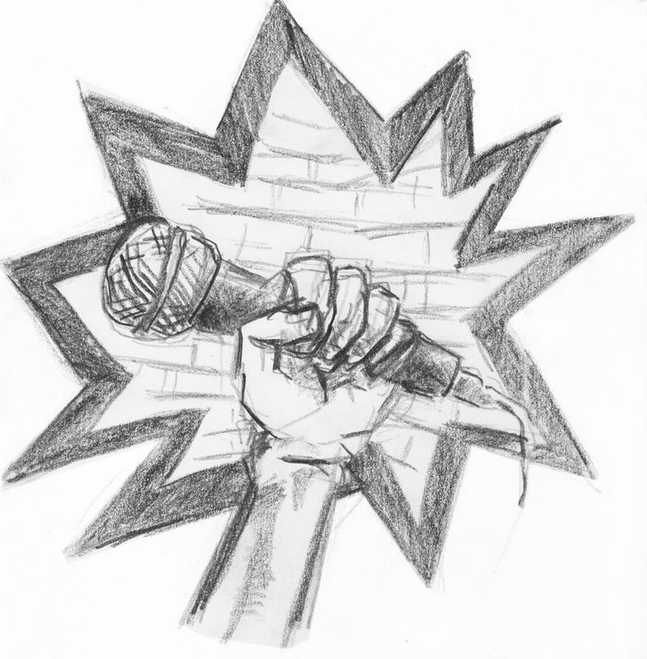 “I DON'T WRITE SONGS ABOUT BEACHES OR LOVE,” says local musician and activist Joey DeFrancesco, “Those things just aren’t a part of my day-to-day reality. I don’t think that’s anyone’s day-to-day reality.” Instead, DeFrancesco writes about workers’ rights and race and class inequality in Providence. In his band Downtown Boys’ song “Rich Boys,” DeFrancesco and his bandmate Victoria Ruiz scream, “Consider the rich and what they’re for! Have you considered the rich? Are you keeping score?”Their chants echo out over driving bass lines and screeching saxophones.

According to Ruiz, the band realized that they could use their music as a platform to raise awareness about local issues when DeFrancesco, a Providence native, released a video online of him quitting his job at the Providence Renaissance Hotel. After informing viewers that he was “treated like shit” for his three and a half years at the hotel, DeFrancesco enters the Renaissance, accompanied by the What Cheer? Brigade. As DeFrancesco declares his resignation to his boss, the band bursts into song and parades out of the hotel.

Since the video went viral two years ago, DeFrancesco and Ruiz, whom he met during her own stint at the Renaissance, have been at the forefront of the Providence workers’ rights  campaign. DeFrancesco created an educational website featuring articles and videos about service workers’ rights and launched a campaign to end tip-theft in Rhode Island, the process through which employers take excessively large percentages of employees’ tip money. “This issue affects everyone,” says Ruiz. “Immigrants, people of color, young white kids working in the service industry, even the tourists who are lied to about where their tips are going.” Former employees like DeFrancesco and Ruiz, along with other workers’ rights activists, have conducted picketing campaigns outside the hotel weekly since April 2013 in an attempt to pressure the hotel into ending its practice of tip-theft. Videos of the pickets show the street outside the hotel filled with music, dancing, and chants of “Si se puede” (“yes we can”). Signs show support for a local service workers’ union, Unite Here! Local 217, and workers tell their personal stories of mistreatment on the job.

The same sentiments expressed by these protestors are reflected by DeFrancesco and Ruiz’s music. Ruiz believes that music should portray the world as it really is, rather than how we want it to be. “Art is about figuring out all the reasons you feel the way you do and simultaneously being able to relate those things to the bigger picture,” she says, “That’s how the personal becomes political.” Ruiz and DeFrancesco not only speak about political issues in their lyrics but use the shows themselves as a tool for activism, announcing actions from the stage and recruiting the audience to sign petitions after their set. “We’re very direct about where we stand on these issues,” Ruiz says. “We wear our minds and actions on our sleeve.”

FOR SOME ARTISTS, SUCH AS PROVIDENCE'S Whorepaint a self-proclaimed “no-wave” band that formed in 2010, a disguised form of artistic activism is most compelling. Singer Reba Mitchell, guitarist Hilary Jones, and drummer Meredith Stern say that feminism is their most unifying influence and defines how they present themselves as a band. “Being feminist has a lot to do with our aesthetic,” says Mitchell, weaving a loose piece of bleach-blonde hair back into her messy beehive. At their shows, Mitchell and her bandmates wear heavy makeup and black lingerie. In the FAQ section of their website, the band explains that their “uniform” intends to “challenge the idea that sexuality and blatant femininity necessarily preclude power.” Jones, who also serves as the executive director of Girls Rock! Rhode Island—a non-profit organization providing music education to girls and women—expands on the band’s aesthetic, saying, “It’s about how we engage in our performance, it’s very,” she pauses, and with a sweet smile finishes, “aggressive.” The band makes a clear effort to express their feminism through their stage presence, but Stern notes that they would still be seen as a feminist band even if their performance were not informed by ideology. “Just the fact that we’re all women is a statement in and of itself,” she says.

The members of Whorepaint are not afraid to be contentious in their self-presentation but are wary of being explicitly political in their lyrics. “For me, the word ‘political’ often references party politics in a way that I don’t really identify with,” says Stern, “We aren’t a band that writes really straightforward lyrics about oppression.” Mitchell adds that while she doesn’t write lyrics that address specific political issues, it’s important to her that the band’s lyrics sound like they were written by a woman. “As a woman, you spend a lot of your life trying to hide your femaleness. In this band we’re not trying to hide it all the time.” For these women, lyrics that explicitly reflect their femaleness are more powerful than lyrics that express a specific political message. “The downside of being outwardly political as a musician is that you can end up preaching to the choir,” says Mitchell, “The only people who will listen are the people who are already convinced.”

MARALIE ARMSTRONG, ONE OF THE PROGRAM DIRECTORS for local music venue and community center AS220, says that much of the activist music happening in Providence right now is based on representation rather than real activism. One example Armstrong gives is a recent booking request she received from a band of trans-women. “They don’t put their politics out there or talk about being trans in their music,” Armstrong explains, “They’re just like ‘we play music, we want to have fun, and we all happen to be trans.’ ” Armstrong sees the emphasis on appearance and identity rather than direct action as a continued backlash against the rise of activist art in the 1990s. “There was so much political music in the ’90s that it got to a point where the message didn’t even matter anymore,” explains Armstrong, “People would just refuse to listen simply because there was a message.”

While Armstrong understands resistance to political music as a majority opinion, DeFrancesco believes that there remains strong support for the genre. “There’s this minority of sort of ‘hip nihilism’ or something—people who think it’s cliché or cheesy to talk about politics directly,” he says, “I think we lose that audience pretty quickly. But we don’t really need them anyway.” DeFrancesco emphasizes that these “hip nihilists” are far outnumbered by the people at their shows who express gratitude towards the band for addressing issues they’ve been experiencing and thinking about. The best reactions at shows, Ruiz says, come from people who are surprised by the political content of the songs but are inspired by the music to take action.

“Real punk music, with a lower case ‘p,’ has always existed because people want to take a stand and do something about what’s happening in the world,” says Ruiz. Like the historical punk bands they identify with, Ruiz and DeFrancesco understand venue choice as political. Many of their bands’ shows take place in unlicensed warehouse spaces in Olneyville, such as Building 16, which is being shut down in under a month. In their deliberate decision to play in these venues, the musicians make a statement about rights to public spaces and the role of the police in controlling who uses space and for what purpose. Whorepaint agrees that venue choice is important, referencing explicitly feminist music festivals such as LadyFest and ClitFest as their favorite shows to play.

IN OLNEYVILLE IN LATE OCTOBER, the warehouse walls of Spark City, which serves as both a performance space for Ruiz and DeFrancesco’s bands and their apartment, were suddenly illuminated by the words: “WHO TAUGHT YOU TO HATE YOURSELF?” The steady thump of a drum shook the room, as if ignited by Malcolm X’s question. Ruiz and DeFrancesco thrashed around to the beat as footage from newsreels and protests danced on the concrete behind them. “Mi concha no es bastante blanca [my pussy isn’t white enough],” Victoria screamed over and over, feeding the energy of the crowd. The excitement only grew when Whorepaint took the stage, as Reba howled over a wall of distortion, her arms and hair waving above her head. Their first song coming to a close, Reba, caught her breath and surveyed the room. “You guys are all just so amazing,” she said, glowing, “I can’t even tell you how happy and proud I am to be here.” Gracing the crowd with a final smile, she put her head between her knees and let out a shriek, barely audible above the roaring guitars.

SOPHIE KASAKOVE B’17 is feeling the energy of the crowd