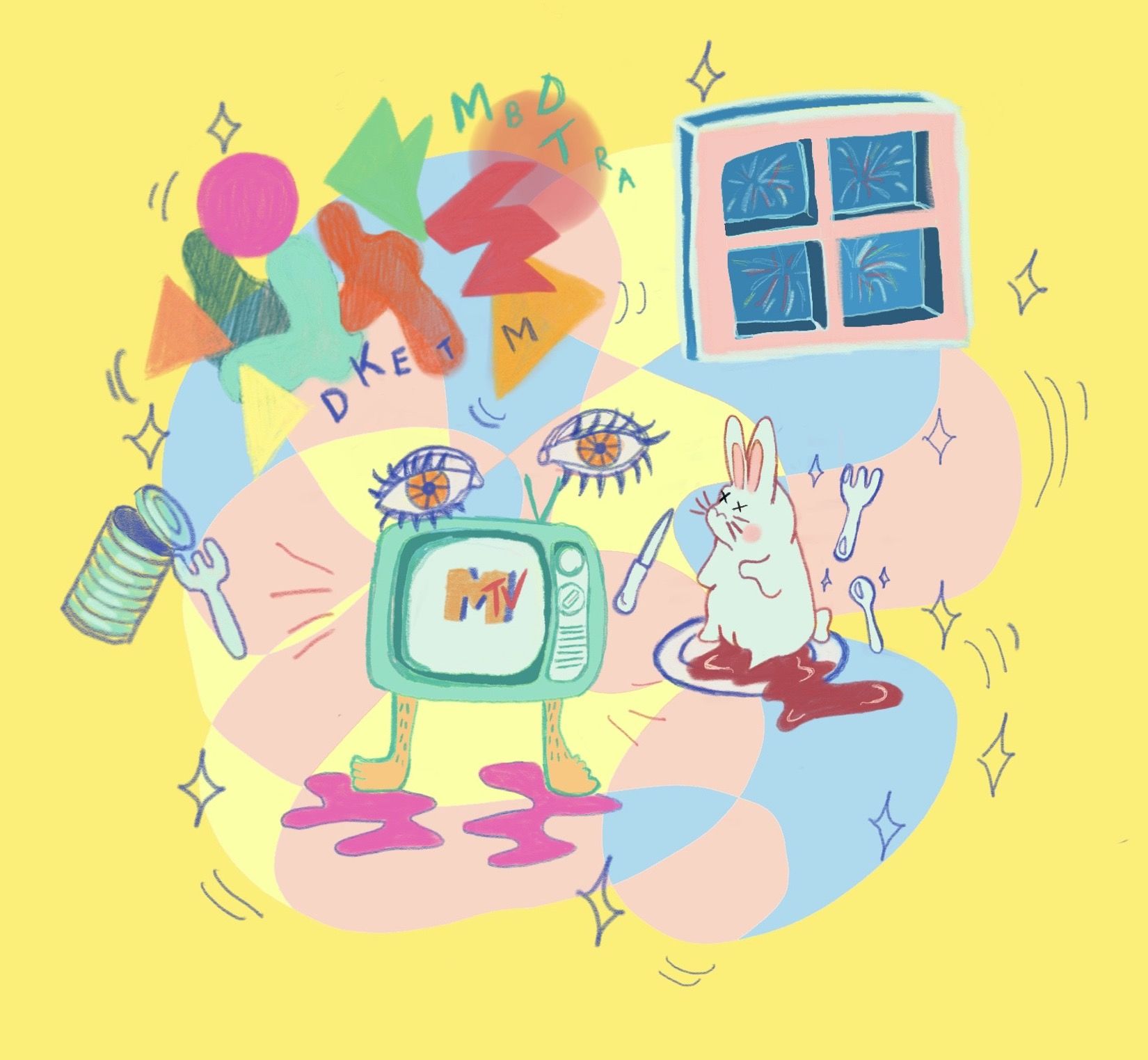 Our neighbors are busy undressing and dressing, entombed in black velvet, over-the-elbow gloves if she wants to make a statement—does this dress make me look fat? My father hurries to the grocery store before it closes and tries to decipher the jumble of letters, or is it the pet store, and selects a few cans, they must not have cats pictured, to bring home. He thinks in one language, reads in another, is stranded by the third. The sun is setting, and mother is cooking in our living room that is our kitchen that is our bedroom that is thankfully not our bathroom.

(Go to the grocery store and try to read the words on the cans backwards, then upside down, in French perhaps. Buy a few and cook them in your closet. Pay close attention to the smell, how it fills the space, stays.)

The world prepares to celebrate a new era of bygone Dionysia, the last turning of millennia falling between the early and high middle ages, a mid-mid-life crisis one could say, so perhaps now we are in our late mid-later life and settling down, preparing to spend our last years in Florida, the final frontier. The open source prophet tells me that of Fujiwara no Michinaga, the puppeteer, jerks his marionette emperors off their paper palanquins and that the ummat al-islam enters its golden age and waits, a quarter century, for its destined demise.

I map the fate of the failed writer Jackson Curtis who is also Nicolas Cage as he watches the world crumble before him, but I know he will be fine and I will be fine because it’s a TBS rerun and no, I do not have or know someone diagnosed with Mesothelioma and my mother is holding me in her arms and she is thinking about how small our apartment is and how the canola oil lingers in the air and makes it dense and hard to breathe, or is it mothballs spilling out of the closet or the tinge of rusting pipes that pricks your nostrils. Can you smell it? The overhead light casts an unpleasant glow into the room, exorcising nooks, the unfortunate reunion of chipped plaster planes, some things better left concealed in the shadows. Our small colored tele set blares MTV in a language my mother doesn’t understand—but look, it’s Gwen Stefani, I just don’t know it yet.

Our neighbor holds a glass of red in one hand— gloveless no doubt, a lady must have her manners —and grips the upholstered seat with the other. Her fingers feel sticky and hot against the confines of the satin palisade, and she laughs a few beats late in response to an offhanded comment about Egon Krenz’s defense against his ‘shoot-to-kill’ policy, as Pink Floyd said, “just another brick in the wall,” or was that a different wall? Her eyes glued to the tele waiting for the fate of Germany, waiting for the fate of the world, and she doesn’t know if she will really be fine even though he tells her it is all just superstition, but my mother knows, because while her eyes are in this foreign world of MTV and mismatched cartoon voices, her ears are a millennium away in China, where the world continues to spin on its axis.

My ancestors traverse over the Atlantic to meet with the K’iche’ Maya of the Guatemalan highlands, where they bestow upon them the teachings of the Popol Vuh, and they will send down a torrent of tribulation thunder that will grant me the swiftness of the hare, the strength of the boar, and the wrath of the dragon, only if I endure the weight of the planet on my shoulders. On the map taped to my bedroom wall I find China, then Guatemala, then Germany, then New York. When I walk my fingertips across the paper, the journey takes mere seconds.

For eight years when I was called to the nurse’s office for my eye exam, I would wait at the end of the line, rehearsing the secret code scripted by the actors before me. A foreign jumble of letters tests me but this one I can’t solve with algebra, row 5 M-B-D-T-R-A, row 6 D-K-E-T-S-M. I run mnemonic laps in my head, Meat’sBitDryTonightRemarksAldrin, Du Kannst Es Tun als Sailor Moon. They say it’s the things we can’t see that we are most afraid of, but I am much more afraid of seeing clearly. I preferred the blurred shapes and colors that melted into each other over watching the spittle fly from my father’s mouth, not looking higher than the divot between his lips and his nose. A baked prophecy told me a closed mouth gathers no foot, but closed eyes release all that’s been gathered, so I often took to the soft haze of liquid screaming. By now my father has returned home and he struggles to open a can with a fork. A tainted odor slips past the cracks of serrated metal, but it is beginning to give, and he works up a rhythm ignorant of the cat hiding behind the rounded grooves. I wasn’t raised to be wasteful. To honor the closing ceremony of its zodiac year, we feast on rabbit.

(Look outside and focus on trees, anything green. Eat carrots. Pinch your eyelids open until your eyes water, then pinch some more. Turn to the person sitting next to you and scream. Louder!)

Then the fireworks fly out over the city, Go!—Our neighbor hears them before she sees them but there are so many sights and sounds and Smile!—camera flashes she doesn’t know which is what streak of light cascade down angels screaming as they are shot out of the sky dotted lines teardrop seraphim can you hear them I scream at the screen and now she takes off her gloves to embrace him who cares if her palms are clammy my mother looks out the window p-sized explosions go off in her head her ears recognizing the familiar popping sound of fire-crackers return to her in Berlin and as they watch the children of the Chatham islands sing on CNN and I watch Nicolas Cage who is really John Cusack settle on a mountain peak it is not Skeeter Davis or Julie London or even Sharon von Etten that plays in our heads but choir arrangements and Jumbotron kisses and as the earth collides into Nibiru plunging the fourth world into a cataclysmic oblivion, we usher in the New Year.

BOWEN  CHEN B'21 needs to go, his mother is calling.