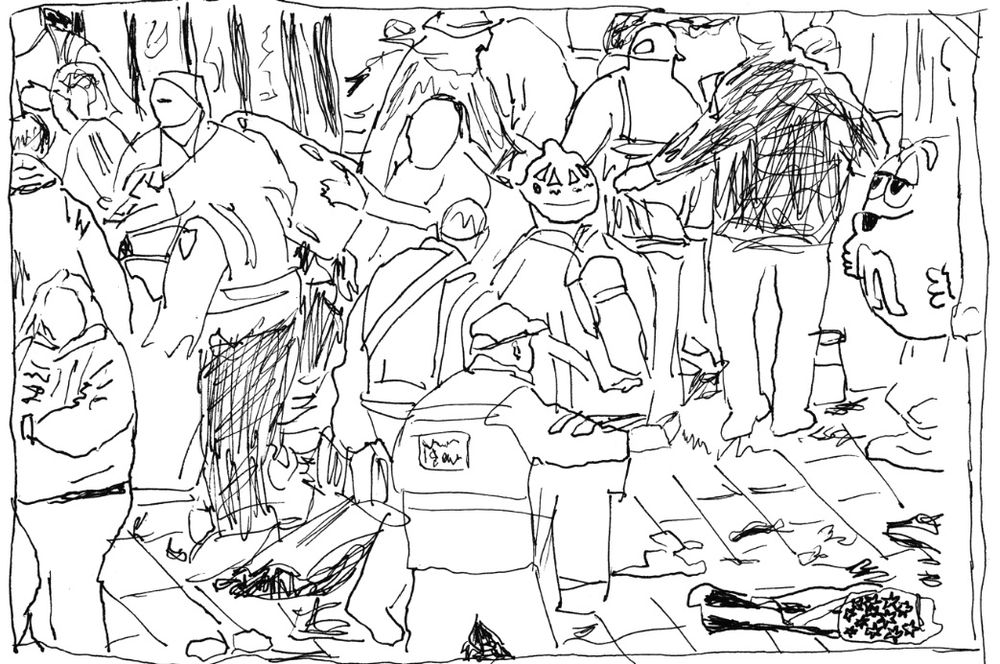 There is a candy shop on Boylston Street. Grace says something happened. Before it is called the Boston Marathon Bombing or the Patriot’s Day Bombing it is, simply, What Happened in Boston. I watch the initial videos on silent because it seems vulgar or voyeuristic. Grace asks if they are scary. “Yeah,” I say.

There’s a photograph of the candy shop. Lots of them, actually, because the candy shop is right there. There are 17 people in the frame and many people gone. But police, firefighters, someone from the K-9 unit, two people wearing hats, and a woman in a brown hoodie are there. It’s hard not to look at the hands—pointing, moving, placed with care on someone’s back. And two offering thumbs-up. Those hands belong to a big blue M&M, plastic, standing just near the edge of the frame. The M&M is smilingvaguely.

There is an American flag in the photograph, strangely shaped and printed onto. I don’t know what it is, I try to figure out what it is: it’s a bag meant to carry one of those collapsible camping chairs. Blood on the sidewalk behind it, and behind that, the M&M.

I want to know what happened, but what happened is also the strangeness of what didn’t happen. On Monday someone brought a camping chair to the Marathon. On Monday they left the case, on Tuesday it is still there, in another photograph, and so is the blood. On Monday people ordered burgers and fries and beer, and they are still there, outdoor tables set, food half eaten. And a big blue M&M standing right there, watching, smiling, from before.