PrEP and the historical transmission of AIDS 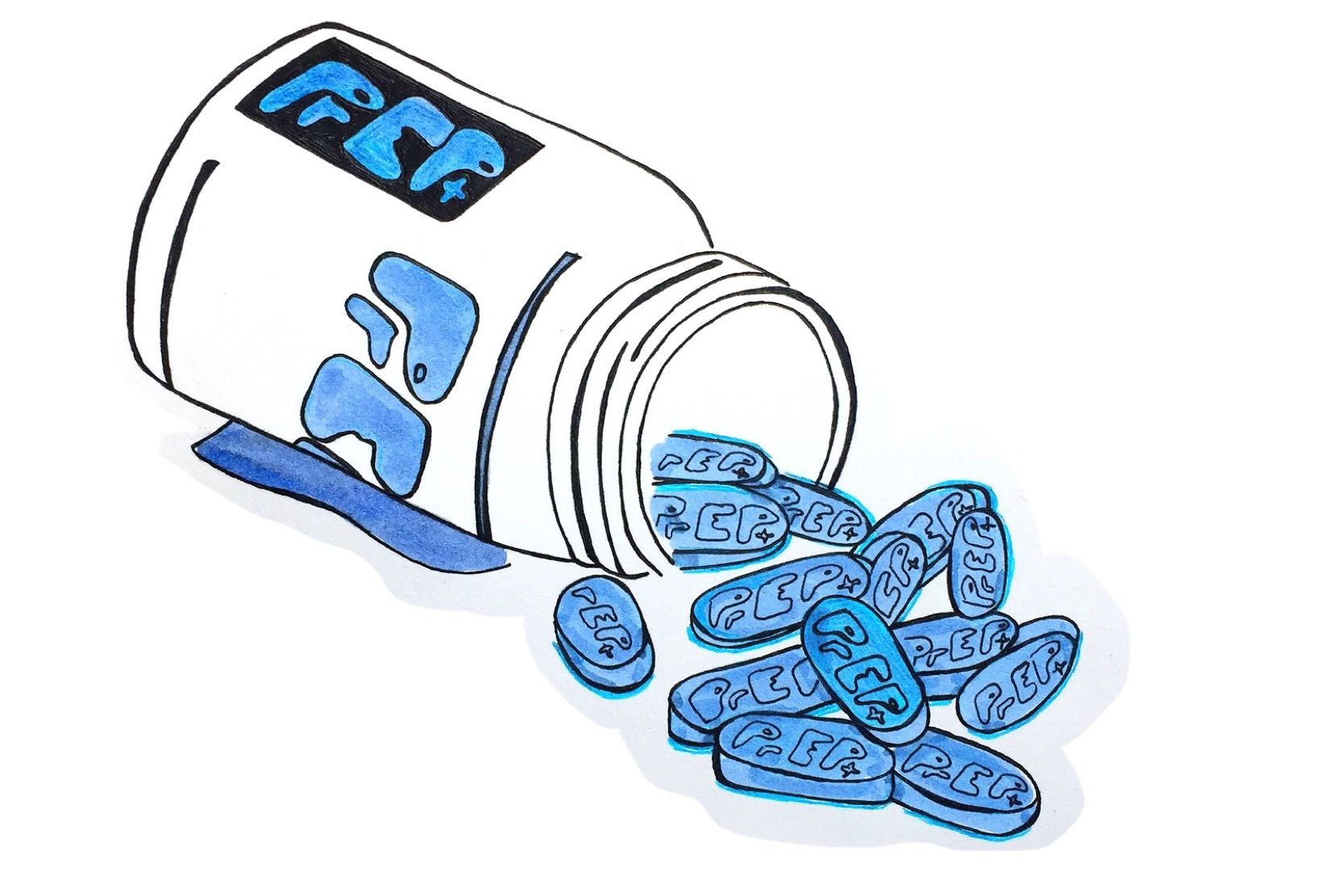 In October of 2019, the queer publication GAYLETTER posted an Instagram advertisement depicting a shirtless DJ surrounded by neon, fuzz-bordered lettering. The ad announced PrEP+, a dance party in New York City hosted by openly-queer musician Frank Ocean. The party, as suggested by its title, intended to serve as an “homage to what could have been”: the 1980s gay club scene as if PrEP—pre-exposure prophylaxis—had existed at the time. Although Ocean was not explicit about the event’s ideological intentions, his party announcement undoubtedly refers to the AIDS epidemic of the 1980s and asks how PrEP could have hindered or perhaps altogether stopped the spread of AIDS, through the pill's ability to prevent the contraction of the HIV. Additionally, Ocean does not specify how he imagines the invention of PrEP could have transformed the era; one possibility might be the opportunity to have unprotected and uninhibited sexual contact without the worry of acquiring the virus, suggested by the erotic undertones in the party’s announcement of its objective to “bring people together and dance.” Nonetheless, the event was shrouded in mystery, both in its undisclosed time and location as well as in its obscurity of  purpose.

Ocean’s party turned out to be an exclusive, invite-only occasion, specifically geared towards queer people of color. Attendees included LGBTQ+ artists, influencers, quasi-celebrities—all of them young.  It was held in the basement of a party venue in Queens, filled with flashing neon lights, live DJ music, and sneak peeks of new music from Ocean’s expected upcoming album.

But the party’s seemingly grand visions fell short. Inevitably, the event attracted fans, many of them white, heterosexual or without invitation, all chasing a glimpse at Ocean’s music or simply the associated cool-factor. Attendees afterward noted the pervasive lack of sexual tenor—the mazes and dark corners characteristic of sex clubs were simply used for conversation. In its most blatant irony, one attendee nearly had his PrEP pill confiscated by security.

The thirty-two-year-old musician immediately received criticism from AIDS activists, most of them older gay men. For them, the party should have promoted awareness of the titular drug, which, according to the CDC, remains underused by millions who could highly benefit from taking it. Many argued that the 1980’s gay club scene was still vibrant amidst the epidemic. Some even accused the party of being funded by Gilead, the pharmaceutical company profiting off of the market form of PrEP, Truvada, which Ocean later denied.

Similarly, the division between ars erotica and scientia sexualis can be found within the discourse of PrEP usage. When young gay men, like Ocean, are presented the opportunity to take the drug to prevent HIV-contraction, they become immediately entangled between these two philosophies.

Today, most American children learn about the AIDS epidemic not in their history classes but through sex-education curriculums. While the curriculums focus on medical facts about HIV/AIDS, they often address the epidemic to demonstrate the historical significance of the virus and the potential consequences if students do not use protection. Through these classes, the children become interpellated by what queer cultural scholar Kane Race calls the “risk discourse” of HIV/AIDS. Not only do children develop an understanding of the risks of unprotected sex, potentially leading them to contract HIV, but they also further moralize unprotected sex as socially harmful. Thus, they become inundated with the past of the AIDS crisis as “other,” as a closed-off historical moment that cannot reoccur if they take appropriate prophylactic measures; but also “other” as the crisis becomes associated with homophobic renderings of gay male sexuality, moralized as a hazardous set of practices warranting an aversion. As young gay men grow into their sexual identity today, they confront a dissonant moment in which the taught otherness of the epidemic contradicts the ways in which their identity may impl cate them within its history.

In this way, young gay men become traumatized by the AIDS epidemic through its inherited history filled with violence, death, and decay. In their examination of intergenerational trauma among Holocaust survivors and their children, psychologists Nanette Auerhahn and Dori Laub assert that large-scale trauma can be passed down through generations, existing in a nonchronological, formless manner that is “not defined by place or time and lacking a beginning, middle, and end.” Auerhahn and Laub explore how children of Holocaust survivors attempt to heal themselves of their inherited trauma through defensive mechanisms, becoming mental health professionals that have a “need to decode [secrets] and help those who suffer from them” or becoming heavily involved as activists in social movements. In each of these cases, the children of victims remain subject to historical trauma on an unconscious level, shaping their present reality. Young gay men must also insulate themselves from the traumatic realities of the AIDS crisis. Simple use of prophylactic measures, such as condoms, might be insufficient—young gay men must psychically defend themselves by imagining, as a moral projection, their sexual practices as outside of the epidemic’s history.

PrEP usage is considerably lower among younger gay men than their older counterparts. This is most likely to due to lack of awareness, but there are other possible moral reasons behind this trend. At its initial release, PrEP took the form of a reluctant object, defined by Kane Race as “an object that may well make a tangible difference to people’s lives, but whose promise is so threatening or confronting to enduring habits of getting by in this world that it provokes aversion, avoidance.” PrEP ensures over ninety-precent—and in most cases nearly perfect—rates of preventing HIV contraction. Yet this heavenly promise did not lead to immediate uptake, especially because the “raw” sex that PrEP safely allows held a heinous position in gay culture.  It sparked a moral backlash among some gay men, many of whom demonized PrEP users as socially irresponsible “Truvada whores” in their admission to condom-less sex, even though its usage would entail extremely high levels of HIV-prevention, sometimes even higher than that of condoms. These gay men were not ready to abandon this regime of the condom, which not only protected them materially as a barrier but further provided a psychological sense of safety, especially in its historical associations with AIDS activism-endorsed safe-sex education. The doubleness of the condom’s protectiveness stands in for the way in which HIV-prevention not only addresses the virus itself but also the moral risk of bareback sex’s aberrant sexual pleasure.

Using queer theorist Elizabeth Freeman’s conception of erotohistoriography, the act of young gay men taking PrEP can be viewed as a mobilization of the pill into a mode of accessing history through bareback sex. Erotohistoriography, according to Freeman, employs the body as a “tool to effect, figure, or perform” an engagement with the past. In other words, as Freeman cites Foucault, erotohistoriography presents an ars erotica historical method because it focuses on bodily pleasures as a source of truth—in this case, a historical one. Importantly, erotohistoriography marks a specific historical intervention away from objectivist traditional historical methods that value information, facts, documents, and discrete objects as gateways to the past. Instead, erotohistoriography turns to embodiment, introducing the possibility to gain pleasure from painful pasts. For young gay men, PrEP allows for worry-free bareback sex that enables them to erotically access lost ancestors through a historical mode of gay sex, using their bodies to transport to a time before the emergence of HIV required protection for “safe” sex. The “historical and temporal disjunction,” as Freeman puts it, of existing as a young gay man several generations after the peak of the crisis, then, can be alleviated through PrEP-mediated barebacking, making the epidemic available through pleasurable means (as opposed to, say, reading a historical account about it) and thereby erotically engaging with a troubling past as transgressive pleasure.

In this manner, Ocean’s PrEP+ party primarily incited controversy insofar as it disrupted the regime of scientia sexualis over gay male health interventions. Under the regime of scientia sexualis, PrEP positions young gay men within a history of medical interventions in the treatment of HIV, from the discovery of antiretroviral treatments to the development of prophylactic methods to prevent contraction—and perhaps an even larger history of medicalizing homosexuality, starting from the 19th century, from lobotomy to electroconvulsive therapy. While taking PrEP, one must be continually monitored by doctors, ensuring that the drug is not negatively affecting one’s health (which is quite rare) but nevertheless placing one under the surveillance of a medical regime. Certainly, HIV drugs were crucially important to dampening the crisis and have saved thousands of lives—their function definitely should not be criticized, nor directly compared to violent homophobia of electroconvulsive therapy. Rather, under the cultural doctrine of scientia sexualis, sex only becomes legible under discrete scientific or medical discourses, leaving no room for fantasy or feeling in the discourse of sex. In this way, antiretroviral drugs or prophylactic measures are only one form of many to “deal with” HIV.

EJL wants you to go to breakthepatent.org and sign the petition to end Gilead’s greed.