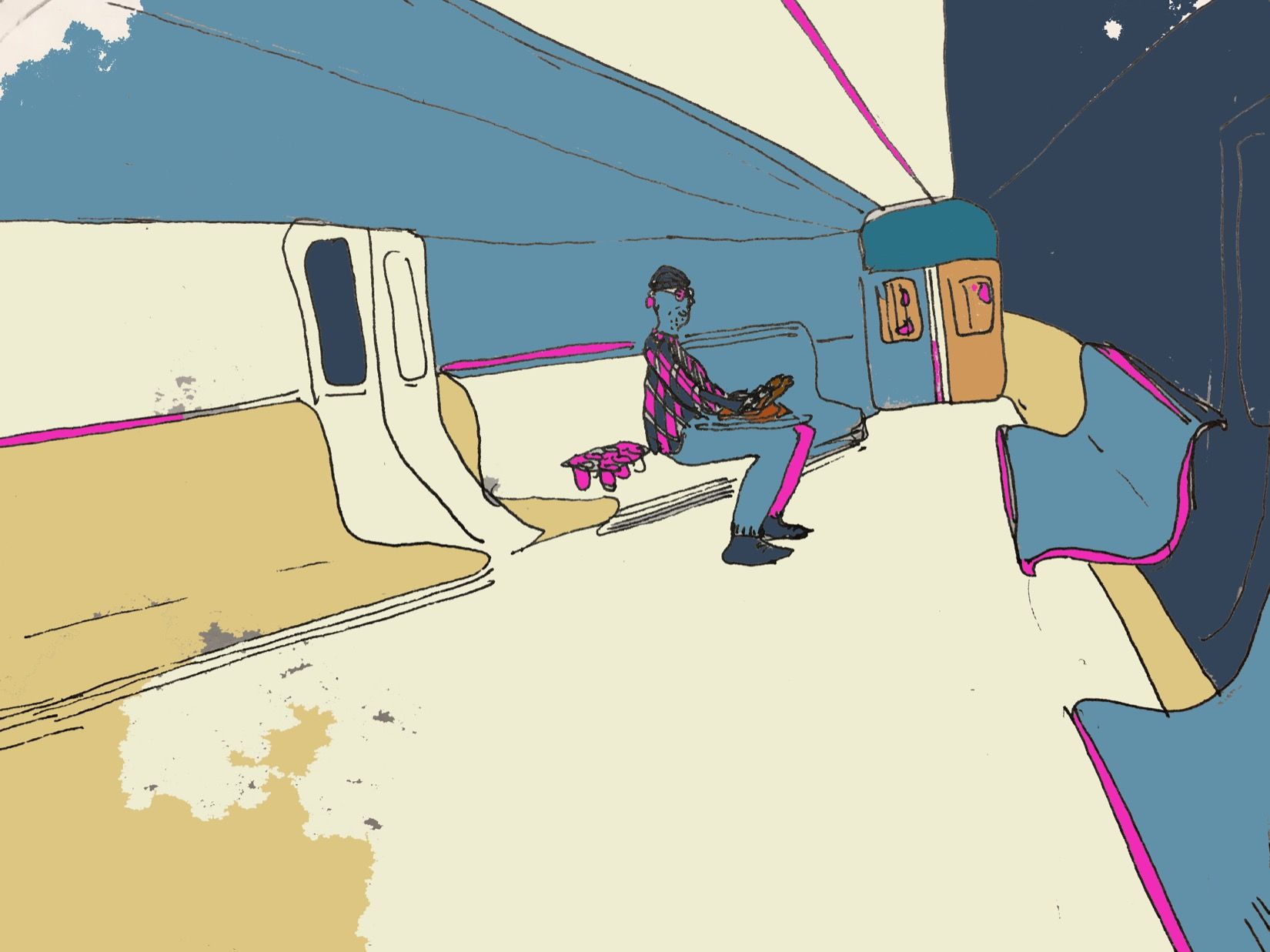 “Everybody get their plates, sit down, and eat,” commuters heard, loud and clear, in a subway car in New York City on Sunday, November 24. Rather than the typical announcements of signal malfunctions and train traffic ahead, riders of this L train were treated to a much more pleasant disruption to their journey: a full Thanksgiving meal. While the train was stopped, a few passengers set up the feast on a white-clothed table, complete with mashed potatoes, stuffing, collard greens, candied yams, macaroni and cheese, sparkling cider, and a whole turkey—much more appetizing than the NYC subway's official bird, the pigeon. All passengers were invited to take a plate, a glass of cider, and come aboard the literal gravy train.

This guerrilla Thanksgiving was organized by local comedian Jodell Lewis, who spent months preparing for the festivities, choosing a target, planning his strategy, and organizing catering. Together with local rapper Christopher Dupree and chef Brandi Baxter, Lewis “wanted to entertain and bring a little excitement to commuters as well as feed New Yorkers who might be hungry,” as he explained to the New York Post. He chose the L train as his banquet hall to draw attention to widespread commuter dissatisfaction with long wait times caused by seemingly endless construction on the L line: “After waiting 20 minutes for a train,” he noticed “how dreary and upset riders were at the inconvenience the new construction provided.”

Long wait times are not the only grievance commuters have with the city’s subways. Lewis’ rogue feast follows nearly a month of protests against increased policing of fare evasion in the subways, which disproportionately targets low-income riders and people of color. These tensions have been simmering for years: commuters have long been infuriated by the subway system’s crumbling infrastructure, and many see the governor’s choice to devote hundreds of millions of dollars to policing rather than to necessary repairs as misguided and out-of-touch. Illustrating popular frustration at such austere policies, in response to a report that fare evasion costs NYC $300 million annually, comedian Jaboukie Young-White tweeted: “so we can try to catch all 500,000 people or have like two billionaires pay taxes.”

With tensions running abnormally high before the holiday season (and trains running normally slowly), the Metropolitan Transit Authority (MTA) temporarily halted construction in an attempt to quiet the grumblings of hangry commuters. “When we announced pausing L Project construction to help New Yorkers enjoy their Thanksgiving dinners, we didn’t mean have dinner on the L,” an MTA spokesperson said. “It’s always nice to see people enjoying the subway but remember our employees work hard to keep the system clean and get riders on and off of trains quickly.” The MTA clearly believes that these Thanksgiving consumers have not shown sufficient gratefulness in time for the holiday.

The gastronomic nature of Lewis’ infraction also draws attention to other issues of repression in the subways. In the last few weeks, the NYPD has arrested a number of unlicensed churro vendors in subway stations, sparking a public outcry defending the widely beloved ‘churro ladies’ (whose churros, this Indy editor notes, are delicious). The L Train feast, which the police ignored, could then not help but highlight the inconsistencies in the NYPD’s attempt to water down the subway’s complex, varied flavor palate. Lewis’ meal was a humorous stunt; churro ladies, most of whom are immigrants, are simply trying to make a living. As one Twitter user, sharing a video of the meal, pointed out, “& somehow the churro ladies are the big issue…”

Celebrating Thanksgiving is rarely, if ever, a form of resistance: the holiday, which perpetuates romanticized white myths about US settler-colonialism and erases the genocide of Indigenous peoples, often garners criticism, and even calls not to participate. Indeed, since 1970, Native Americans and others have instead participated in a National Day of Mourning. This year, President Trump claimed in a speech that the so-called “radical Left” has declared a "War on Thanksgiving." Many people on Twitter have responded to the #WarOnThanksgiving with a healthy serving of derision. One user parodied that ever-American form, the wartime letter home, saying, “The war has begun. I am on my way to the Bowling Green campground to fight in the Battle of the Carbs. I will bring my mac and cheese....you’re going down scalloped potatoes!” And bring the mac and cheese they did, from Bunker Hill to the fortressed subway tunnels.

The #WarOnThanksgiving (and, more broadly, all that the holiday stands for) is, in fact, very real. From New York City to Chile, where protestors have burned train cars and toppled colonial statues, dissent in the subways belongs to a growing global movement resisting austerity, neoliberal economic policies, and imperialism. And so, ironically, the L Train Thanksgiving feast, with its reclamation of public space and celebration of commuters’ joy in the face of underfunding and over-policing, is part of that. We at the Indy would like to join in and offer a seasonally appropriate holiday greeting to the MTA and the NYPD: Eat your heart out.

Take a big, decadent, moral bite of “Justice ReMix’d,” one of Ben & Jerry’s newest flavors. Not only is the chocolate and cinnamon ice cream full of “gobs of Spicy Fudge Brownies,” but “a portion of the proceeds” from each purchase will also go to vaguely defined projects for criminal justice reform across the United States. Parallel in spirit to the mixture of binge-eater shame and slacktivist pride one is supposed to feel after downing a pint of their admittedly tasty ice cream, Ben & Jerry’s own corporate mission is oriented around three distinct imperatives: “to manage our Company for sustainable financial growth,” “to make the world a better place," and “to make fantastic ice cream—for its own sake."

This attempt at branding, as a corporation that is thoughtful, responsible, and thoroughly above exploiting anything but our collective craving for sugar, is one that has largely succeeded in the minds of American consumers. As the Boston Globe reported on November 18, “For decades, Vermont-based Ben & Jerry’s has enjoyed a reputation as one of the country’s most progressive, forward-thinking companies." This reputation, however, in the final weeks of the decade, now finally seems to be coming under threat, not in regards to its projects, but its produce. Ben & Jerry’s has suddenly found itself on the receiving end of two class action lawsuits, alleging that their claims of sourcing their social justice-funding milk from “happy cows” raised in “Caring Dairy” farms are deliberate deception and false advertising.

Meanwhile, halfway across the world, a technological breakthrough has been made in the very same field of cow happiness. In the frosty Russian countryside outside of Moscow, the emotional well-being of dairy cattle let out to pasture in the dreary, gray winter is being tackled head-on with a solution apt for the new decade: virtual Reality goggles for cows. Yes, much like Ben & Jerry’s has for years allegedly pulled wool over the eyes of self-styled "progressive purchasers," so too shall the cows of Russia have their eyes covered by digital wool, enticing them to yet-unseen levels of quality milk production with the sweet, bright, green hues of a simulated summertime landscape.

While Ben & Jerry’s is busy seeking to tempt customers with the promise of happy, frolicking cows, the Russian farms in question will let the caliber of their dairy speak for itself, as they circumvent the need to physically build the calm, pleasant environment needed for such excellence in the fields, instead investing directly in what matters most: the cows’ minds. This great leap for cowkind creates an entirely new quandary for the animal rights movement—rather focusing on human perception of the cows’ physical conditions, Big Dairy has moved us into uncharted territory, reorienting the debate to the cows’ own perception of physical conditions that do not, in actuality, even exist.

With the future of pure, untainted milk lying in wait, Russian students, IT specialists and veterinarians labor away at the bovine Matrix, adapting headsets to the anatomical specifications of cow skulls and developing 3D models of warm, soothing pastures. Here at home, however, good old American milk slips behind as a domestic fifth column of environmentalists, lawyers and shadowy ‘Organic Consumers Associations’ drag Ben & Jerry’s to the District of Columbia Superior Court. At issue is not the degree to which the “Caring Dairy” program actually lives up to its name, but that Ben & Jerry’s has greatly exaggerated the percentage of their milk sourced from these farms. To wear the badge of honor that is “Caring Dairy,” farms are required to commit to giving their cows the daily outdoors time and place them in animal welfare monitoring programs—technology-induced bliss does not yet seem to form part of the equation. This constitutes but one part of what environmental activists have described as the company's history of “greenwashing," the central role of “liberal politics and environmentalist claims” to Ben & Jerry’s brand, from their fully-employed “activism manager” to the twee electoral puns labeling the cartons of ice cream lining supermarket shelves.

The question of “Empower Mint” thus seems to be a pressing one for consumers and livestock alike. While soon cows wearing VR goggles will “in place of Russian reality see a summertime field,” according to one Russian news source, American ice cream-buyers may instead get a glimpse of their own realities of production, what lies behind the façade of two bubbly men from Vermont with a penchant for puns. Cows and humans alike, we may all prefer what is simulated for us, whether it is an alternative to the bleakness of rural Russia, or the cruel systems of exploitation undergirding our everyday consumption, that lie at the heart of the “Americone Dream."