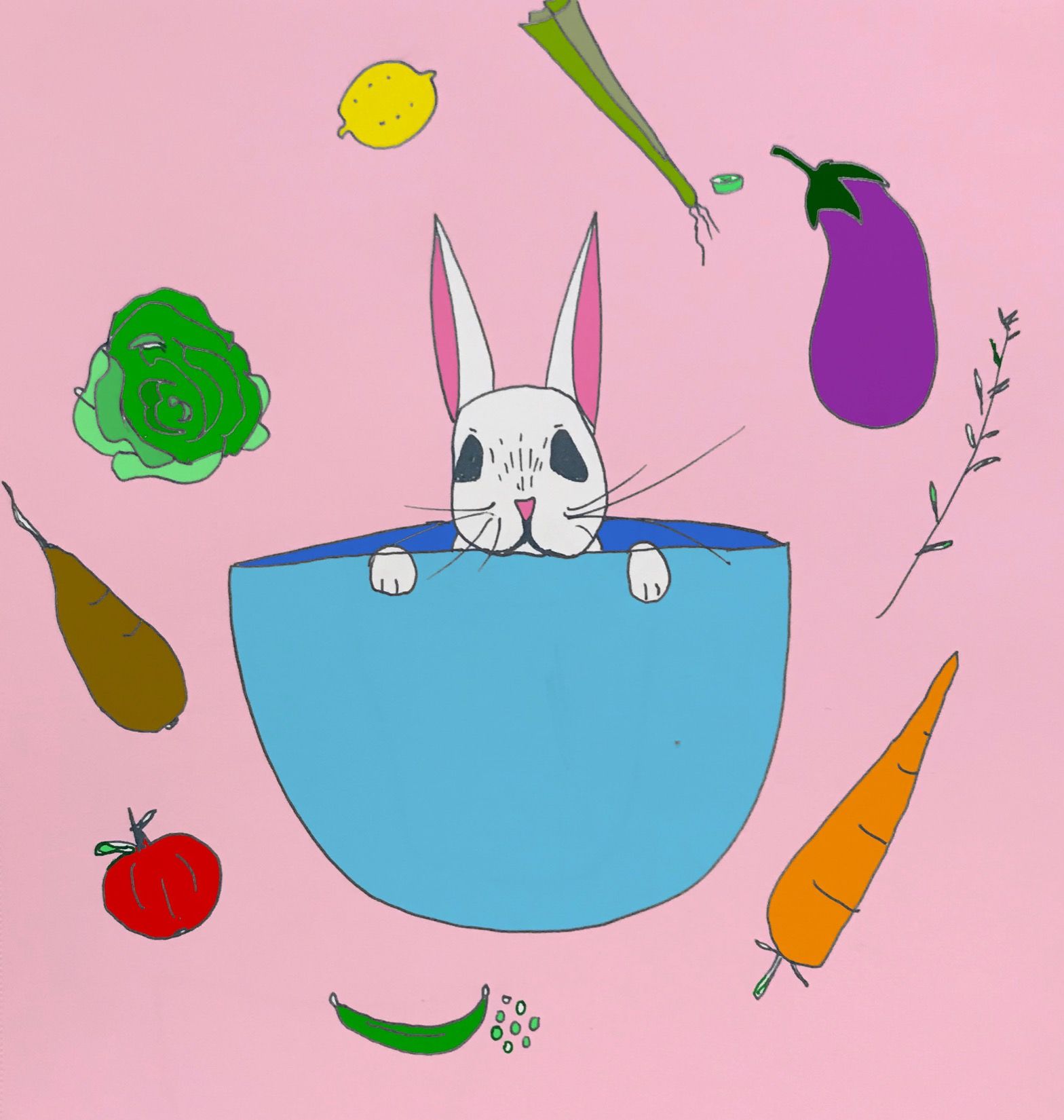 Valentine and I moved in together at the start of a Rooster year—the kind that, decades ago, my mother was born into, the same day that the first human stepped onto the moon.

The year Valentine and I moved in together was America’s first full year under the new administration. It was another year of California drought that turned into fire. It was my twenty-sixth year of existence on Planet Earth, Valentine’s twenty-third, our second together. The year that I went vegan.

The year began with legume-induced constipation, which Valentine assured me would go away soon. At the dinner table, he offered me more three bean salad.

“It hurts,” I said, hand to gurgling stomach. "How could this be good?”

He grinned. “Soon, you’ll even crave it.” He raised a spoon to my mouth.

I remember my mother’s telling of my first solid food. This must have been when we lived in Taiwan, because she told it to the aunties from church. According to her, at lunch one day, before either of my parents could prevent me from doing it, I reached with fat hands into a steaming basket of xialong bao. I picked up a dumpling, bit off a little of the skin, slurped the soup inside, and popped the rest of it—slimy ball of aspic and pork with the remainder of the glutinous rind—into my mouth, chewed, and gulped— clean.

“Bunny didn’t get a drop of soup on herself,” my mom giggled.

At this story of immaculate consumption, the church aunties cackled.

He was right about the beans; my stomach calmed after a few weeks. The bloating decreased. I was no longer farting constantly.

Being vegan was easier than I expected, especially in a city where all the valued customers were giving up meat. At Fatburger, I paid a dollar extra for an Impossible Burger. It really tasted and bled like a cow, I told Valentine, and he laughed, kissing me.

“I’m so proud. Doesn’t it make you feel better to know that you’re not harming animals?”

I leaned closer and nibbled his ear.

Vegetarianism wasn’t totally new to me. I remember sheepishly asking, after having read Charlotte’s Web in my second-grade class, if I could abstain from the bronze suckling pig my parents had purchased in celebration of Dad’s promotion. Dad didn’t hear me at first, but Mom glared and shook her head.

The fatty slice was too pale, though glazed bright orange on the edges. I stared at it, imagining a rosy creature of jiggling alive flesh nuzzling me and oinking into my nose. My tears fell onto the slab.

The crease between his eyebrows deepening into a trench, my father asked Mom, “Did we bring an ingrate into the world?”

One early morning as I watched Valentine drift into sleep after we had stayed up through the night, I had the thought that if he knew the extent to which I needed him, how much I starved for his affection and assurance, he’d be disgusted.

massaged his temples and suggested that we go outside to watch the sun rise.

He opened his eyes. “Mmm,” he said, pushing my fingers away. “We could drive to the beach and have a picnic. But what time does the sun rise?”

“What time does the sun rise?” I asked Siri.

Valentine rose to make sandwiches while I threw my phone to the side and burrowed further into the bed. I waved my limbs around in our new sheets the way people in snowy climates make angels.

I felt sticky between the legs as I swished and rocked against the mattress. When I got up to go to the kitchen, I noticed that I’d bled through my underwear onto the sheets. I remembered then that I hadn’t been taking my pills. On our new sheets, the spot was the size and color of a kidney bean.

When our small family first moved to this country, I had diarrhea constantly. Dad said it was my toddler stomach acclimating to mass-produced American meat.

If the urge came in the middle of the night, I would wake up Mom so I wouldn’t have to face my stinky, raging mudslide alone, on the cold toilet, under the drone of the fluorescent light. Instead, Mom, groggy from sleep, would hum made-up Chinese opera melodies over my poop-brimmed farts. She’d hold my hands while I squeezed her thin, beautiful fingers, grateful.

“Where does this go when I flush?” I asked her once.

Head in my lap one humid afternoon, he clung to my torso like an urchin, and I felt as if he was trying to swallow me with his heavy limbs. But by bending my shoulders and head over him, sucking in the cucumber shampoo scent of the blond whirling over his skull, I smothered him first. I imagined him inside me, not just partly, but his whole body somehow contorted into my stomach, sucking at my organs—soft red heart, liver, kidney pumping to nourish him, all of him sustained by the innards of me, so that from the most rudimentary tendrils of our consciousness, we would be attached.

In my mind, I devoured him. He never knew. It’s my heady secret: capacity to consume. And I felt queasy.

We were confused when we stepped onto the shore, but then vaguely we remembered having been taught ages ago that the sun rises in the east. Of course. Our West Coast intelligence. Behind the new apartments facing the pier, the sunlight was barely visible. We sat in the sand to stare at litter, ashen ocean, and a pathetic slice of moon.

“Get up! Let’s go swimming.” Valentine nudged me. I didn’t want to move, so he stayed beside me. We split a tofu sandwich.

Like some miracle as we sat digesting, a bright round soaring thing propelled against the gray sky, streaming ribbons of clouds behind it as it lept.

“A shooting star,” I exclaimed. “What’s your wish?”

“I think that’s Elon Musk’s rocket,” he said, but he made a wish anyway.

On a January evening, I had a huge craving for pork, maroon and smothered in liquory hoisin, dripping slow-seductive with each cut. I rummaged through the goddamn nut butter, spinach, rice, and bean salad in the fridge. It was all pale.

Valentine was out. I opened UberEats.

I pressed “Empty Cart” three times before going through with it, fingers stiff.

I splayed across our bed. By then, after a year of daily use, the sheets were frayed at the edges and speckled with obscure stains. I closed my eyes and opened my limbs as if waiting for someone to emerge from the bathroom and enter me.

After the deliveryman came, I went to get a plate but lost focus midway into the kitchen, unfolding the paper bag and yanking out the hot plastic box. Bag, napkins, utensils clattered onto our tiles. “Absolutely unmixed attention is prayer,” a college boyfriend once said to me. I pawed the fuschia-coated pork into my mouth. Tore it with fangs so the juice spurted, and the box fell. My tongue strained to keep pace with the quaking of its house. Then I began to think of all the pigs I had consumed by that point.

I pictured the celebratory sucklings, pepperoni on pizza, public-school-lunch ham, bacon, Canadian bacon, canned minced stuff with onions, the expensive loin that the boyfriend before Valentine had taken me to try on my birthday. Of course, the innards of xialong bao. I thanked them, these pigs, including ones I couldn’t recall but who had passed through me all the same. Nothing dirt-grown or laboratory-made could match the certain taste of death.

Valentine was opening the front door. “Bunny?” he called. I had the last bit in my mouth and let it hang out while he walked through the living room and the bedroom toward the kitchen.

A few weeks after the incident and twelve months after I moved in with him, in mid-February, shortly before the next Lunar Year, I walked in on Valentine bunched up in the bed with another girl. She was also Asian (though I’m not sure what import that has, if any). Neither I nor Valentine spoke; there was nothing to say. The girl blushed into our grimy sheets.

When I moved back home, Mom and Dad said, “Bunny, you can’t be so foolish. We won’t be here forever.” I said I knew. They didn’t ask anything else of me.

My belly grew huge while I consumed voraciously whatever Mom served, especially meat.

After the Year of the Rooster passed, people hosted parties on the dirty beach to watch a mannequin named Starman jump into orbit far beyond the asteroid belt. Several months later, we sent a Twitter-famous robot dog to poke around Mars. By then, our hunger had long surpassed the poor moon, and going out of my way to track time through animals and moons seemed too patently irrelevant.

Still—I was eating the meat from my childhood again. It was the Year of the Dog. And eight months into this Dog, far before February could pass us into Pig, our phones started buzzing with alerts of machine-gun sightings in neighborhoods around us. The remaining forests began burning up. And while fire (afterward, diarrhea-like mudslides) swept our city, a scientist over in China announced that he had successfully modified the DNA of some unborn twins to save them from a lethal disease.

The next month, under a full moon that I spotted from the freeway as Dad sped us to the hospital, I gave birth to my own twins—fat and half-not-Chinese boys— carved from flesh past their due date, looking like the slimy meat inside bao.

But they screamed with a fury only alive things possess.