Plants and the City 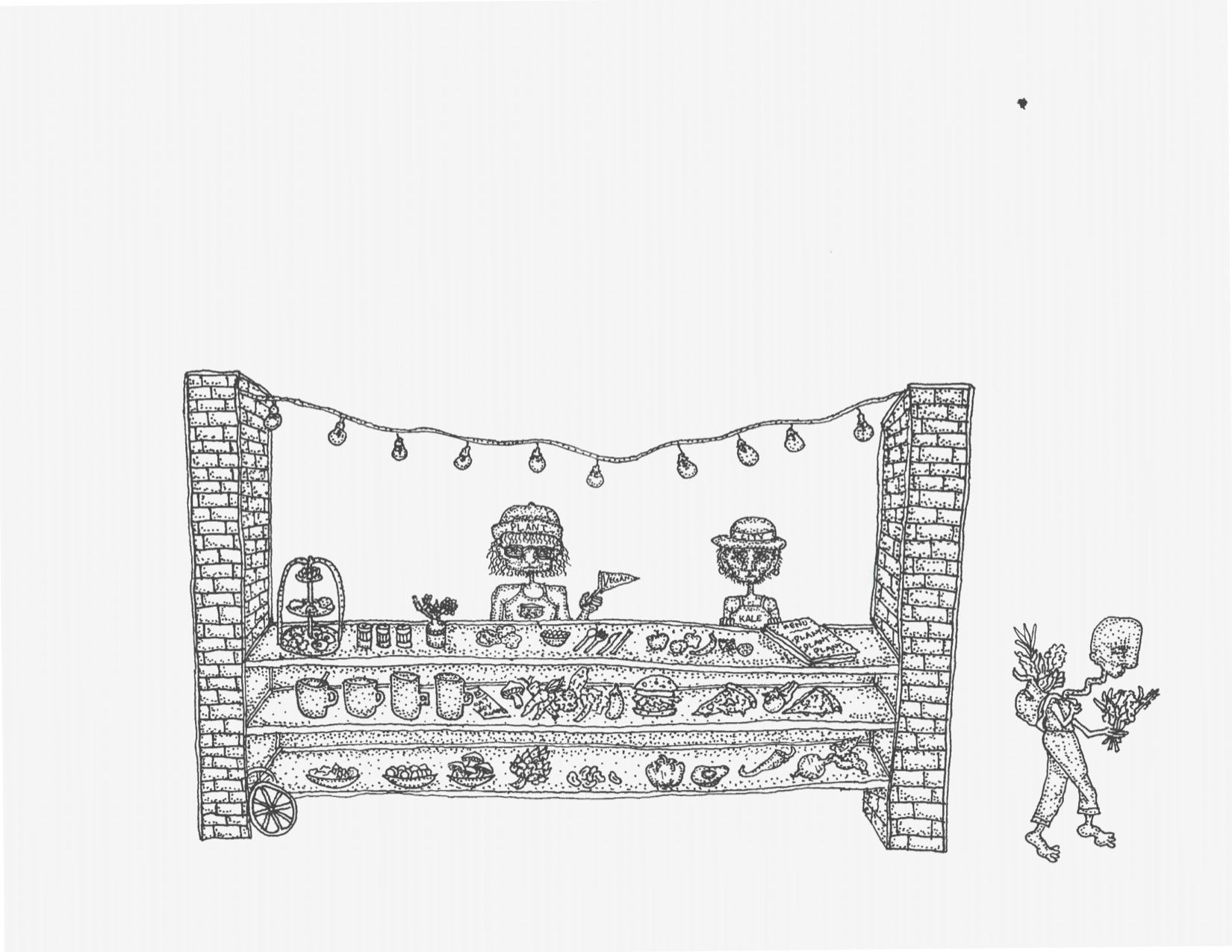 Approach the new pedestrian bridge on the Providence River on a weekend night and you might quickly be distracted by crowds, fairy lights, and trendy music from across the street. Patrons of all ages are spending one of their last warm nights on Plant City’s chic, illuminated patios. Enter the giant brickface building and you’re met with clean white walls, plenty of decorative plants, a marketplace of vegan groceries, and a giant white neon sign that says “EVERYDAY PLANT-FOOD.” Looking out of the floor-to-ceiling windows, you feel the buzzing energy of this new, luxurious spot in Providence.

The modern interior consists of four plant-based eateries. The first floor, with a casual food court vibe, features a sign for “Make Out,” a café for take-out. Provocative, maybe.

Up the stairs on the second floor you’ll find a formal dining experience, with Bar Verde for Latin-inspired cuisine and the Double Zero pizzeria. These restaurants began in New York City, where chef Matthew Kenney earned a Michelin star for Double Zero. This glamour—a Michelin star from New York!—perhaps dazzles and awes.

The opening of Plant City this summer was “a dream come true,” said assistant manager Justin Denning. He told the College Hill Independent that within the first three days, the giant business had served more than 15,000 people. “We opened with a staff of around 95, and that number has grown to more than 200.”

Plant City, which has quickly taken hold of Providence residents’ attention, is not a restaurant, as Denning explained; it is a “food hall.” Reminiscent of the famous Eataly in New York City, the two-story building is a curated experience. “The palette, the materials, it’s all part of an aesthetic vision that the owners have developed,” Denning told the Independent.  All four restaurants are the conceptions of Matthew Kenney, a world-renowned vegan chef. The owner and creator is Kim Anderson, a Rhode Island local who frequently dined in Kenney’s restaurants in New York City. Her family, which has been vegan for four years, liked Kenney’s cuisine so much that they reached out to him with their ideas for Plant City.

Anderson is an investor with Everhope Capital, a venture capital firm that invests in social enterprises that are hoping to make a positive impact on the climate. She is passionate about the ecological benefits of a plant based diet. “We can do all we want about fossil fuels and changing the system...and whatever, but the fastest way to reduce these numbers is to move from an animal to a plant-based diet,” she told the Independent. She showed me numbers on the website “The Vegan Calculator” to demonstrate the impact of a single person going plant-based, to demonstrate the environmental impact of the 130,000 customers who had come to Plant City. The calculator roughly estimates the impact of a single person’s plant-based diet. “All the customers so far, it’s like one person being vegan for 105 years,” she explained. The numbers are staggering: 44,165,000 gallons of water, 1.6 million pounds of grain, and 1.2 million square feet of forest saved. Anderson is clearly proud of these numbers, and hopes the impact goes beyond her business. “I want to show people that they can go plant based if they want to, and really enjoy it,” she said.

The business employs responsible practices wherever possible. Food is mostly made completely from scratch, according to Denning, and whatever isn’t is sourced from local businesses. Ice cream at Plant City, for example, is from the Providence vegan creamery, “Like No Udder.” Every container handed to customers is compostable. “We make more compost than trash,” Denning told the Independent, with pride. A sign above the recycling, compost, and trash bins informs customers that everything that has been handed to them is compostable.

It’s clear that Plant City is offering an alternative to an animal product-based diet. The question is who these alternatives are for. Plant City caters to an audience with more disposable income. “We are equally priced to many other restaurants [in Providence], serving similar foods,” Anderson claimed. “Most people say we’re incredibly economical for what we do.” A pizza pie for two or three people ranges from $17-21, pre-made sandwiches are around $11, and a burrito from Bar Verde comes out to $16. While not overwhelmingly expensive, these prices are standard for the types of customers who come to restaurants like those on College Hill. In comparison, a meatless sandwich at Geoff’s Superlative Sandwiches on South Main Street will come out to around nine dollars. A burrito from Tallulah’s Taqueria on Ives Street comes out to $10. Though Plant City’s prices are slightly higher, none of these College Hill restaurants are particularly cheap; they cater to young professionals rather than the larger Providence population.

With the approval of the Fane Tower and new developments in the Jewelry District, Providence seems to be trending toward a shiny new landscape that is meant to attract this same demographic. The 46-story Fane Tower has been at the center of contentious debates in Providence between residents, developers, and city government for three years, and was approved this past weekend. Many Providence locals have been strongly against the tower, which will literally transform the Providence skyline and continue to raise already increasing prices of living. These developments are neither the beginning nor the end of gentrification in Providence. New establishments such as Plant City, which presents itself as almost a one-stop shop for a vegan lifestyle, continue to shape Providene’s shifting landscape.

It’s too early to predict exactly what role Plant City will play in the shifting socioeconomic atmosphere in Providence; as a new business, Anderson and Kenney’s vision still creating its impact on the community. Anderson and Plant City’s mission of raising awareness for the benefits of a plant-based diet are clear. Her vision is for eating plant-based to feel accessible and enjoyable. One can hope that the vision feels accessible to all members of the community. When asked what kind of customers Anderson sees coming into her restaurant, she replied, “Everyone.”

But when Anderson says, “Everyone,” she means everyone who has financial access to Plant City’s product. Expanding on her answer, she told the Independent that most people who come into her food hall are not vegan. Omnivores come to Plant City too. But, in reality, Providence is not divided into vegans and omnivores. Providence, rather, is a place in which longtime locals feel the encroachment of a gentrifying city in which the Fane Tower will fill with residents who can afford a $16 burrito.

But, on this warm night, it’s hard not to be captivated by the invitation Plant City extends. The music is loud, the walls are very white, and there’s an endless variety of non-dairy ice cream to choose from. To complete your Plant City experience, descend to the cellar level for classes in meditation, vegan cooking, or reiki. Or perhaps pick up a bag of “Hippeas”­—vegan cheese puffs—on your way out. But, taking in the décor, the music, and the cuisine, remember you’re in Providence. Enjoy the new pedestrian bridge, look out at the river, and be grateful you don’t have to go all the way to New York to enjoy a decent slice of vegan margherita anymore.