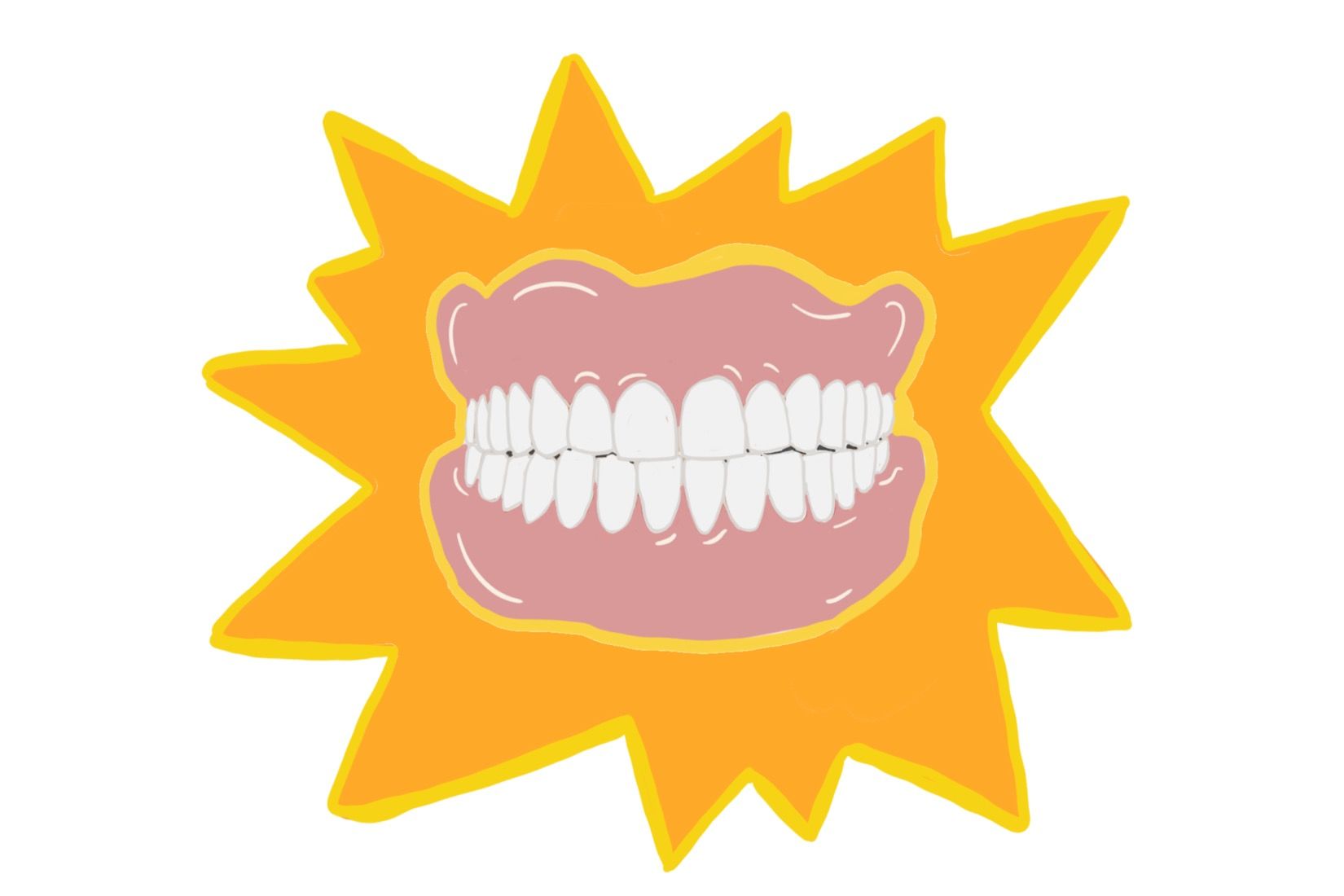 The 2020 presidential race has opened with such an oversaturated field of candidates that sometimes distinguishing between them all is like pulling teeth. During the September 12 Democratic presidential debate, former Vice President and frontrunner Joe Biden struggled to answer a tough question on the NRA. With Biden failing to ‘reach across the aisle’ and find a congressional majority post-Sandy Hook, journalist David Muir expressed doubts over the grinning ex-VP’s competency. But Biden’s response—relatively coherent compared to the rest of his performance that night—was quickly overshadowed. Viewers everywhere were overwhelmed by the strange mouthal calisthenics that accompanied his words. Was it gum? Or were those winning pearly whites—just like the notoriously plagiarized 1987 Iowa State Fair speech that imploded his 1988 presidential run—flashy, but not of his own creation?

This probable denture mishap gave fodder to existing claims that the 76 year old may be too long in the tooth for the job he aspires to. Talk of his age, speculated senility, and failure to win a primary since 1973, not to mention the substance of his policies and voting record, play second fiddle as the New York Post, alongside others, shriek, “Joe Biden struggles to keep his teeth in his mouth,” placing the very gleamers that make him popular in jeopardy.

But American presidential history is no stranger to those who lie through their teeth. At its root are the ivory shiners (mythologized as wood) behind George Washington’s stony smile. Washington, insecure about the puffy appearance of his denture-laden jowl, posed most often with a stern frown. An existing complete set of his choppers—fashioned from a smorgasbord of human, animal, and ivory teeth—can be viewed at his estate in Virginia. Another such gem can be found at the National Museum of Dentistry in Baltimore, where his lower jaw denture dated to 1795 grins in perpetuity. Biden’s own smile, an icon of the Obama years, may find its home alongside Washington’s someday. Indeed, his embodiment of silver-haired manhood recalls the dignified aged appearance of our founding fathers. That said, Biden would certainly flash his canines with more confidence were he crossing the Delaware.

Today’s televised debates are now criticized for their value as entertainment, and not as an opportunity to bite into ‘the issues.’ Commentators often recall the original televised presidential debates between a visibly anxious Nixon and infamously handsome Kennedy in 1960, an election theorized to have been won on visual charisma alone. Since the advent of televised debates, America has not elected a balding president, although nearly every candidate has been male and of typical balding age. (A balding Gerald Ford won neither his VP nor Presidential position through national election.) Biden has ensured that his own hairline creeps forward with what the Independent can only assume are state-of-the-art hair plugs. Cory Booker, in unconventional style, naively awaits his own surge in popularity once he perfects the sheen on his hairless crown.

The ubiquity of the camera has certainly heightened the physical scrutiny of our public figures. Joe Biden himself has capitalized on this phenomenon, with resurfaced photos of his attractive youth and the nostalgic foundation of his campaign, Obama-Biden memes. But while the visual narratives of a campaign delight us, such frivolity only goes so far. As eighteenth century politicians presented themselves with vacant stares and decided frowns, today’s politicians don rolled up sleeves and phony smiles. A benign set of gnashers offset any failures in action, indulging the instinct to forgive that which is visually pleasing, a dental mask to the words that slip out from behind. Biden’s orthodontic acropolis sparkles where his words fail to shine. What can I say, Joe, dentures or not, smile away.

Everybody knows not to buy the utilities in Monopoly. It’s just not worth sinking your hard earned cash into the electric company when you could be focusing on more lucrative properties. But what if you had a little more cash on hand? And what if the Electric Company was called ‘Wifi?’

In Hasbro’s newest edition of Monopoly, which aims to be “the first-ever game in the Monopoly franchise that celebrates women trailblazers” by flipping the pay gap, women receive 20% more money at the beginning of the game and when passing go. The streets and avenues of Atlantic City are replaced by products and technologies invented by women—Boardwalk and Park Place are now ‘chocolate chip cookies,’ and ‘stem-cell isolation.’ The railroads are rideshares, a significant loss for mass transit. A new array of tokens includes a wine glass, private jet, watch, dumbell, and notebook. Jail is still jail.

If Ms. Monopoly has served any social purpose thus far, it would be the antagonization and frustration of dozens of the angriest online trolls. Madeleine Kearns of the National Review calls its rule change “patronizingly pointless.” And the concerned and angry citizens of the reviews pages of Target,  Amazon, and Walmart seem to echo the negative sentiments of media pundits. Walmart.com’s MrEquality penned a one-star review entitled, “Our families deserve better.” It seems that any recognition of the real world wage gap, and any embrace of a reparative process comes across as a transgression to the rabid sexists (and there are plenty!) of the board-gaming world. Feeding the trolls may not be a winning strategy, but it certainly is cathartic.

Still, questions abound. What makes this Monopoly ‘Ms.?’  What about the rigid and ungraceful gender binary that the rules enforce—does Hasbro really believe the human race is composed of exactly two genders? What is inherently more ‘Ms.’ about rideshares or wine glasses? What does an extra 40 dollars do in the game itself? That’s less than two nights of rent at Marvin Gardens (aka life raft)! More importantly, what does an extra 40 Monopoly dollars in a game do for actual women in the actual workplace? As Amazon user RZB sardonically commented, “I bought this in the hopes that the 12-year old girls in China who work the printing factory for this edition of Monopoly get a 5 cent raise.”

The switch from ‘collecting’ properties to ‘investing’ in inventions is a little clunky, and it remains to be seen how one would conceptualize building a little hotel on “retractable dog leash” or paying rent to the owner  of  "acupuncture tool." Still, it seems at least to be a way to shine a light on and celebrate the achievements and excellence of women whose labor often goes unrecognized.

In fact, the Hasbro corporation would do well to shine that light right back around on themselves. Monopoly itself is a stolen, watered-down version of the Landlord's Game, the creation of Lizzie Magie, an outspoken feminist and anticapitalist who intended her creation not as  glorification of rent-seeking capitalism, but as direct criticism. Hasbro has been lining its pockets with the fruits of her labor for almost a century while giving her nothing but lip service—500 dollars and a small note of recognition on the newest few editions of the game. Hasbro would have you believe, as the cover of their Ms. Monopoly edition suggests, that we can build a suburban, car-dependent (there is still free parking),  Ayn Randian utopia where the chocolate chip cookie reigns supreme. Ms. Monopoly presents the double-edged danger of profit-driven corporate politics: cheapening a social movement while empowering (and enriching) the executives.

The Independent is wondering whether the Hasbro executive management team (one woman and seven men) may have tried to ‘lean in’ so far that they’ve fallen on their faces.