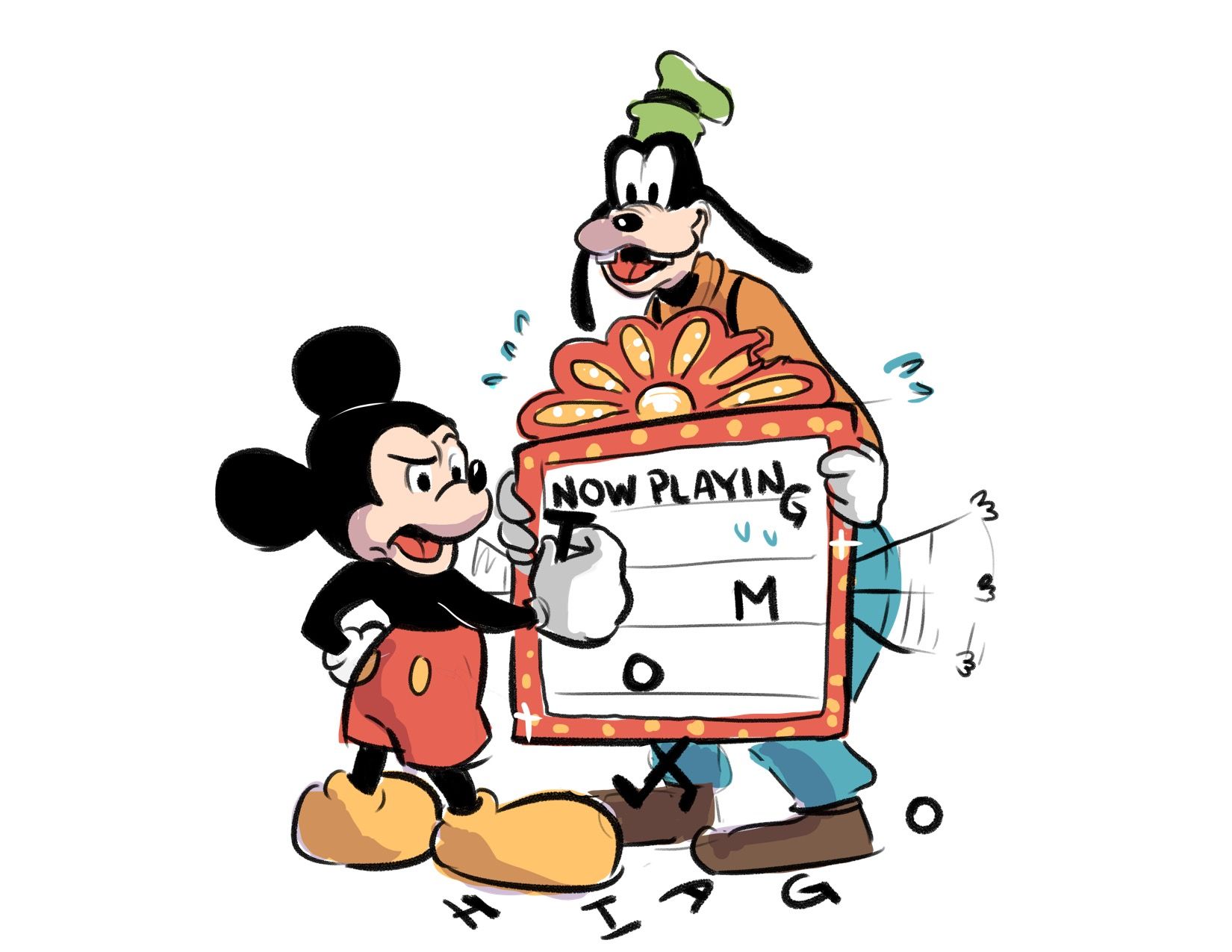 In 2019, the Walt Disney Company became the very first studio to release five films that each grossed over one billion dollars in a single year. As a projectionist at an independent movie theater in Massachusetts, I couldn’t help but see the writing on the wall. As a one-screen theater, our cinema was consistently strong-armed by the Mouse into only playing their most recent blockbuster for up to four weeks worth of showings—an agreement that shoves out other big-name releases and potential indie underdogs. While bad for business, the alternative is also financial suicide: choose to not screen the most recent Disney flicks and watch audiences flock to adjacent venues while revenue dips even more dramatically. Needless to say, I saw the smash hit remake of The Lion King more times than I could count over the course of the summer. Though I came to appreciate the film’s convincing visual excellence, I couldn’t rid myself of the feeling that there was something lacking in its attempt at engaging a more mature demographic. Disney remakes tend to improve positively upon problematic legacies left by their originals, but leave out the silliness and fantastical elements for which many audiences are nostalgic.

So how does the recent string of Disney remakes—a list that comprises hits like The Lion King, Alice in Wonderland, Christopher Robin, and Jungle Book, among others—go about adapting animated films to the live-action format? And how does this change of medium affect the logic guiding these films, as well as their thematic coherence?  Such an investigation must start with the progenitor of this fairly recent genre of blockbuster, 2010’s Alice in Wonderland, directed by Burbank’s most commercially successful misfit, Tim Burton. Deliberately or not, the master of mall-goth perfected a technique of revising children’s animated classics to fit a more ‘mature’ aesthetic palate, thereby appealing to an adult audience on top of the franchise’s core tween viewership. Alice highlights two essential ways in which subsequent Disney remakes would diverge from and ultimately contrast with their traditionally-animated originals: first, using live-action and CGI to produce a sense of realism that their animated counterparts did not try to accomplish, and second, crafting complicated plots and grimmer characters to ostensibly elevate classic titles beyond their status as children’s cartoons.

Compared to the wonky, proto-psychedelic atmosphere of the 1951 original, Burton’s Alice eschews lighthearted caricatures in favor of CGI creatures whose hyperrealistic designs border the uncanny valley. In the version that Walt himself produced, the Mad Hatter and March Hare, among other residents of Wonderland, are drawn with wacky proportions that children can comprehend and relate to quite easily; take the famous tea party sequence, where Hatter and Hare celebrate their “un-Birthday” by performing bizarre feats of dubious logic, such as causing a chorus of pots to sing in harmony, or filling cups that have been sawed in half with tea. Despite the scene’s ridiculous presentation, every action works within the bizarre logic and impossible physics familiar to animation. The magical elements present mainly express the emotional contours of Alice’s reality. Not much of the same can be said for Burton’s version, which retains the original’s quirks and exaggerations, but varnishes them in a dourness that tries to convince the viewer of the film’s dramatic integrity. Though Johnny Depp’s Mad Hatter still speaks with a lisp and lobs tea in stacked cups, his gaunt and ghostly features diminish the character’s playful nature. Similarly, March Hare’s frantic twitching, now rendered with convincing detail, reminds one of a diseased animal. The remake constantly declares its resistance to the whimsical reality of the source material, and only occupies its framework in a detached and vacant manner. As a result, all of Wonderland’s emotional connectivity is short-circuited: One sees the characters as ironic parodies of naively illustrated Disney creations.

Facing similar complications is 2018’s Christopher Robin, in which the Walt Disney Company resurrects Winnie the Pooh and his woodland friends as CGI dolls. This goes against the way in which Winnie has always been presented: an anthropomorphic bear whose plush animal status is never placed under scrutiny. Partly as a result of this unbroken principle, generations of children have invested the character with trust and admiration. Yet the 2018 version goes out of its way to emphasize Pooh’s inanimate existence by highlighting every thread, stitch, and matting of fur; even his beady eyes are more akin to buttons than actual peep-holes. The film’s use of CGI and saccharine visuals do not better immerse us in a child’s fantasy, but reduce the experience of such to a nostalgic relic that is forever lost. For instance, during (yet another) tea party sequence, Pooh and Tigger appear caked in layers of dust, the environment is drenched in a sludge of sepia, and a melancholy orchestra saps the scene of its joyf. This impression of loss would be fine if it corresponded to the film’s message; instead, Christopher Robin insists that adults can, in fact, retrieve their childhoods. Though it gestures toward a compelling statement on the disappearance of that naiveté perhaps crucial to children’s movies, the film lacks the conviction to successfully carry out this theme, and, as a result, dawdles in its own indecision.

If films like Christopher Robin and Alice retain some of the exaggerated designs of their traditionally animated forebears even as they coat their characters in a veneer of hyperrealism, then The Lion King presents the logical step forward: it substitutes the iconic models of the 1994 original with generic renderings of animals akin to ones you would find in the Museum of Natural History. By constructing a more precise approximation of a reality in which animals can speak (and vaguely reenact the plot of Hamlet), director Jon Favreau offers little room for the audience to invest the characters with their own imaginative capacity. For the purpose of The Lion King, Favreau’s special effects team even invented a new form of VR ‘motion capture’ that aimed to create convincing CGI with “the shaky-cam look of a handheld camera.” Shaky-cam, a form of cinematography meant to replicate the atmosphere of home-movies, tends to privilege the realism of the event being depicted over formal dramatic conventions. It suggests a sense of distrust toward spectacular presentation, even when the subject matter (such as talking lions) obviously falls under the umbrella of the spectacular. The conversation between Simba and Scar over the former’s future inheritance comes off as vacuous, without the conspiratorial intrigue that the original’s expressive animation may have engendered. When the film tries so hard to convince us of its ludicrous anthropomorphisms, the fantasy which made such ludicrousness compelling in the first place vanishes.

Despite all of their visual posturing, on a narrative and thematic level Disney remakes still behave as children’s movies would—sometimes, even more childishly so. It should not be ignored that traditional Disney ‘classics’ explicitly advocate for a code of moral conduct and behavior that does not hold up by today’s measurements. At the same time, these films do not forcefully handhold the viewer through the statements they are trying to make, but tend to present the conflicts in perspective as farcical. In comparison, the remakes authorize their moral judgements through dramatic stakes and sympathies that appear shallow, as though they are coddling the audience. A conspicuous instance of this can be traced back to Burton’s Alice in Wonderland, when a bobble-headed Helena Bonham Carter orders one of her frog servants to be executed for stealing her tart. The low angles, slowed editing, dramatic drop in music, and punchy acting all compel the viewer to fear the Red Queen and sympathize with the frog who had been unjustly indicted. In comparison, the original film’s analog to this scene depicts the declaration of execution as rather quotidian: it is performed with an upbeat musical number, as though to suggest the Red Queen’s behaviors are no more outrageous than those of the Hare and Hatter. The film levels the playing field between both parties, leaving it up to the viewer to navigate the moral landscape on their own accord, rather than directing them at every moment.

The manipulation of audience sympathies to validate a film’s dramatic integrity runs though another recent Disney remake, The Jungle Book, also directed by Favreau. Here, the antagonist, Shreva Khan—a tiger seeking to kill a young human living in the jungle, Mowgli—is transformed from a bumbling foe that hunts Mowgli for pleasure to a brooding and injured outcast of the jungle seeking vengeance on the boy as a representative of the human species. Favreau forfeits the villain’s wit and playfulness to authorize what amounts to a condescending moral message, which manifests most clearly in the 2016 version’s revised ending. While the original presents Mowgli fighting Shreva out of hubris, and thus emphasizes character development over any explicit message, the 2016 Mowgli performs the exact opposite gesture by refusing to fight Shreva in order to overcome the longstanding enmity between animals and humans. Though it is well-intended, the film paints Mowgli as a messiah, and thereby indulges in a simple resolution that glides over any complexities the original conflict may have posed. When the herds of animals take Mowgli’s side to defeat Shreva, a gesture that shallowly reconciles the real issue of human and animal coexistence, one can’t help but feel patronized. This isn’t to say anything about the film’s historically oppressive subject matter (echoes of Rudyard Kipling’s imperialist legacy still resound through Favreau’s seemingly sanitized adaptation), but to point out how Disney sacrifices character-centered drama for cheap solutions to global problems. The convenient formula amounts to escapist entertainment rather than a legitimate call to action, despite vigorously presenting itself as otherwise.

As these films continue to be churned out on a seemingly monthly basis, I’m reminded of David Mitchell’s 2004 sci-fi epic Cloud Atlas, in which he envisions a future where every film is referred to as a Disney. Mitchell’s satirical riff on corporate familism rings with surprising relevance, as cultural nostalgia for a regime of cartoons that can only be replicated cynically, without the animated magic they once possessed, wears thinner. Regardless of critics’ remake fatigue, Disney’s remake-train does not show any indication of stopping: Browsing Wikipedia, one sees at least 12 future remakes already in production. When I return to work at the theater next year, I will not be surprised to find Disney once again plastering our marquee, and original titles more conspicuously absent than ever.