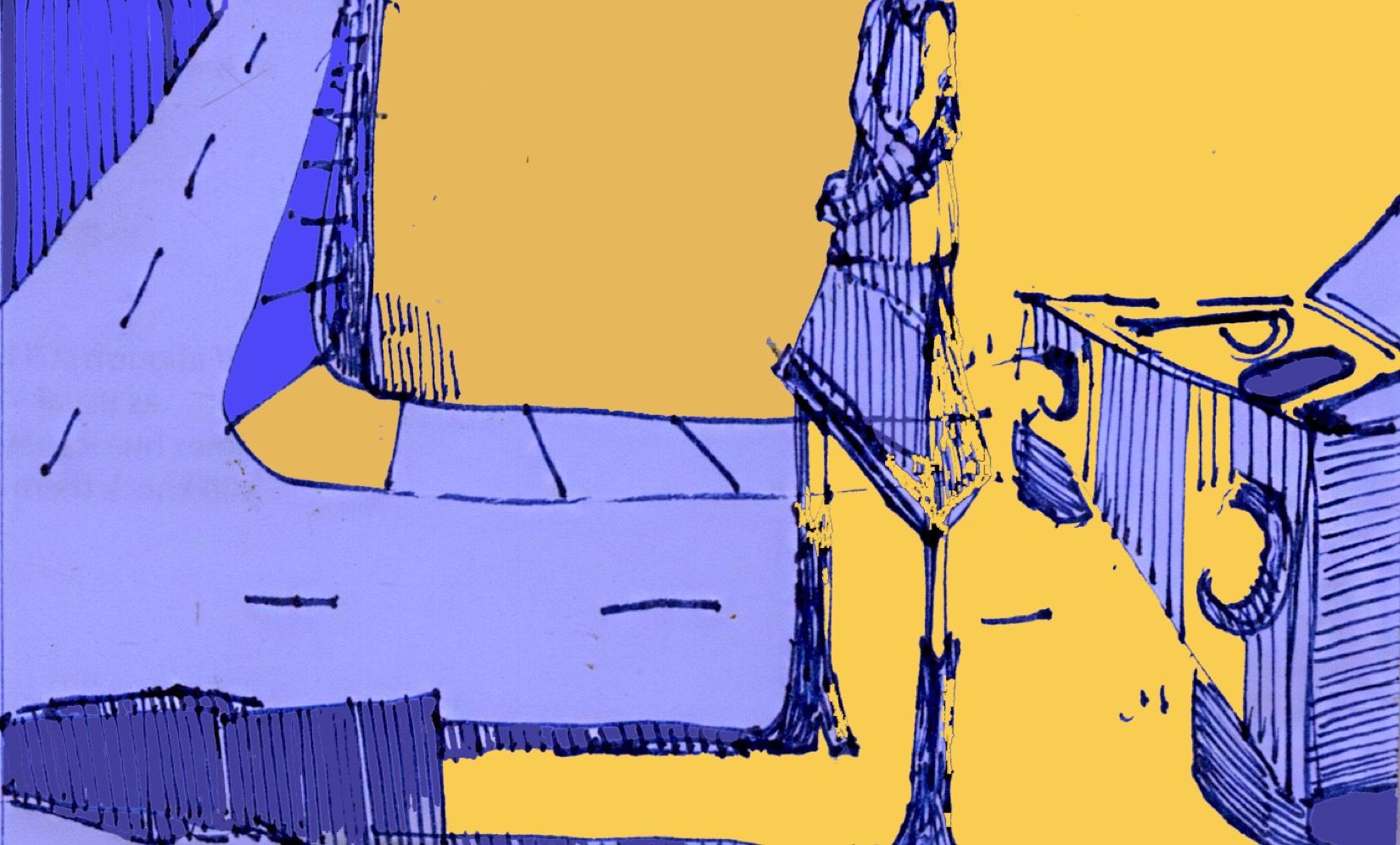 Every Wednesday night, Bella Robinson parks her tangerine Nissan Rogue inside the faded lines of the lot by the McDonalds and Dunkin Donuts on Broad Street, a spot she says the “working girls” often visit between shifts. It was 18 degrees the night the College Hill Independent spoke to Robinson, and her SUV was one of the few stragglers in the glazed parking lot. It could have snowed at any minute, but still, she decided to stand next to the trunk of her car. With her glasses pushed back in her auburn-dyed hair and a scarlet pea coat to match, she shivered in the cold, waiting for her guests to arrive. “Hey honey, whatcha need?” she said to a heavy-set man approaching her.

“Anything you can spare,” he replied.

Trunk opened wide, she reached inside and pulled out four floral-patterned bins filled with the essentials for her outreach work: water, hygiene supplies, naloxone kits, condoms, gloves, hats, and Ritz-crackers.

As the executive director of COYOTE RI (Call Off Your Old Tired Ethics Rhode Island), a sex workers’  rights organization, Robinson offers supplies to sex workers and anyone else who is in need, no questions asked. Outside of outreach, Robinson volunteers her time educating high school students, university students, and local organizations about sex work and is a leading advocate for the decriminalization of sex work in Rhode Island.

This year marks the 10th anniversary of the criminalization of indoor sex work in Rhode Island. ‘Indoor’ sex work refers to offering of sexual services through websites, escort agencies, and massage parlors. From 1980 to 2009, the practice had been legal due to a legislative loophole that strengthened laws against outdoor, street-based sex work and accidentally legalized indoor sex work in the process. The mistake went unnoticed until 2003, when eight women could not be convicted after police arrested them in a sting operation on massage parlors. Sex workers from all over the country started flocking to the new safe haven state when they discovered the loophole.

Robinson herself is no stranger to sex work; it’s been her livelihood on and off for thirty-five years. Now fifty-four years old, she says it's how she can afford her home, purchase a brand-new truck, and support her cat, Bobby Two.

Her path to sex work started at 18, after she left the 41-year-old man she had married only a year before. After the marriage ended, she decided to live out of her car, eventually making friends that would become her survival guides and teach her how to work the streets.

“I learned that if I turned two tricks, it paid for my hotel, cigarettes, food, and I would never have to kiss a man’s ass again. I was the master of my own castle,”  Robinson told the Independent.

In 2009, Robinson was working in New Jersey using online sites like Backpage.com when one of her clients told her that sex work was decriminalized in Rhode Island. She initially dismissed the comment, assuming the man was trying to impress her, but a quick Google search verified her hopes. It was all she needed to pack up her home and move to Rhode Island.

“Oh my god, girl, it was like freedom for the first time,” Robinson said.

For the first time in her life, she could call the cops on customers who threatened her, work from home without the fear of being evicted, and raise her child without any fear of losing her.

But her freedom was an accident, a mere legislative error. In 2009, there was an eruption of opinions that criticized the legality of indoor sex work. Donnie Anderson, executive minister of Rhode Island State Council of Churches, wrote in a statewide email saying, “There can be no doubt [sex work] is twenty-first century slavery and we have placed ourselves in the eye of the storm.”

Donna Hughes, a sociologist at the University of Rhode Island who spoke against decriminalization in 2009, feared the loophole would enable sex trafficking.

“I felt it was very important to stop the movement to decriminalize prostitution in the United States,” she stated in a podcast created by WHYY, a public FM radio station that serves Philadelphia. “The ones who get freedom are the pimps, the sex buyers, the businessmen who then can rent properties to the massage parlors and to the sex buyers. There’s very little freedom for the women.”

There had not been a federally prosecuted human trafficking case reported in Rhode Island for nearly a decade, but the critics of decriminalization won. On November 3, 2009, Governor Donald Carcieri signed a bill into law, just six months after Robinson set foot in Rhode Island, that closed the loophole and took her taste of freedom away from her.

About a year after the loophole was closed, Robinson read about the Gilgo beach murders, a series of killings of women on Long Island—many of whom were associated with prostitution—committed by an unknown murderer.

“I started becoming an activist after that. Something in me just broke, and I told myself, this isn’t okay,” says Robinson.

Criminalization puts sex workers in a vulnerable state where the fear of being arrested may prevent workers from reporting acts of violence.

The current laws render it almost impossible for sex workers to do their work safely and to seek help from other sex workers. For instance, according to Robinson, if sex workers work together, they risk being charged with a felony for promoting. This happened to Robinson, who, at 44, was working with another woman off Craigslist when a SWAT team kicked down her door and arrested them.

Under this system, many sex workers also refuse to share information about clients with each other for fear of getting charged with a felony.

“If sex work is decriminalized, I can say, ‘Yeah, I know Tom, he's a nice guy’,”  says Robinson. “Or I can say, ‘Uh, no, he’s on a blacklist for choking some girl out...’ and I'm supposed to go to jail for promoting prostitution because I want to help keep others safe?”

The inability to organize under criminalization also creates a lack of solidarity. According to Robinson, if sex workers try to unionize, they may be charged with criminal enterprise.

As a sex worker who has lived through both decriminalization and criminalization, Robinson is determined to demonstrate the positive impacts of legalized sex work. Part of this effort is lobbying for H5354, a resolution introduced by Representative Anastasia Williams this past February, which would create a commission to formally study the health and safety effects of decriminalization in Rhode Island. It would also guarantee COYOTE RI a seat at the table, which would give the organization, and Robinson, a voice at the state level.

On April 4, 2019, after a hearing in the House, it was decided that the resolution would be held for further study. Robinson plans on “going for it again” next year, but the real win, she says, was that COYOTE was able to testify and spread its message.

“Our testimony was well-planned, where people talked on different points to call out the narrative and tell some stories, and now it’s on public record,” says Robinson.

The ACLU, RI NOW, and The Womxn Project HQ are some of the supporters of the resolution.

In an interview with the Independent, Steven Brown, Executive Director of the ACLU, said that H5354 is a “good and timely bill that will revisit the state's prostitution laws.”

“The ACLU long supports decriminalization. We think it's a victimless crime and think the state has nothing to do with it,” Brown told the Independent. “We recognize the disproportionate discrimination on women that this law creates, as [women] are the ones to most likely be charged with the crime.”

Still, there are others similar to Hughes, who are more skeptical of the resolution and the decriminalization of sex work. Some opponents shared Hughes' sex-trafficking concerns, like Rhode Island House Representative Sherry Roberts. The representative refused to comment on the resolution itself, but wrote in an email to the Independent, “I believe it could potentially become an enticement for increased criminal activity into the state, like human-trafficking, for example.” Roberts also had other concerns about sex work, stating, “I oppose decriminalization because I don’t believe it does anything to promote family values.”

Robinson argues that human-trafficking has little to do with the majority of sex work. “Immediately when legislators come hear about the resolution, the response comes from anti-trafficking people and people who've never worked in the sex industry,” she says.

In a 2017 study performed by COYOTE RI, 1,494 sex workers were interviewed, and of this population, only four percent considered themselves victims of trafficking. 51 percent of the sex workers, on the other hand, reported being victims of a crime while working, and almost seventy percent of them said they would not report it to the police.

Robinson argues that a majority of the news about sex trafficking has been inflated by anti-sex work groups in order to get funding from sponsors. She claims the “rescue lobby,”  as she calls them, tries to make victims out of sex workers who are caught, promising them benefits in return. “The police will threaten you,” she says. “They'll say, ‘We're going to put your name in the paper and everyone is going to know that you're a whore, but if you say that you were forced, you can become a victim. ’ Then they'll parade you around a fundraiser so you can tell your struggles on the microphone...”

A better solution to combating sex trafficking, Robinson argues, would be to have “knock and talks,” where, rather than arresting sex workers, undercover police would book an appointment with sex workers to check in on them to make sure they're safe.

Robinson made a point to mention that supporting sex work doesn't neccesarily mean you approve of it, it just means you understand that criminalization contributes to the abuse of this population.

In the end, Robinson thinks she is working torwards a larger, more complicated goal than the decriminalization of sex work.

“Yes, we want decriminalization,” she explains, “but if we win it tomorrow, they’re only going to try and take it away, like abortion. I feel like my job has to be about shifting social perception. Because when the majority of society starts to stand up for sex workers, they’re not going to be able to take our rights away from us.”

VICTORIA CARUSO B‘21 thinks everyone who is able to should support COYOTE RI at https://www.gofundme.com/f/soliciting-for-change.