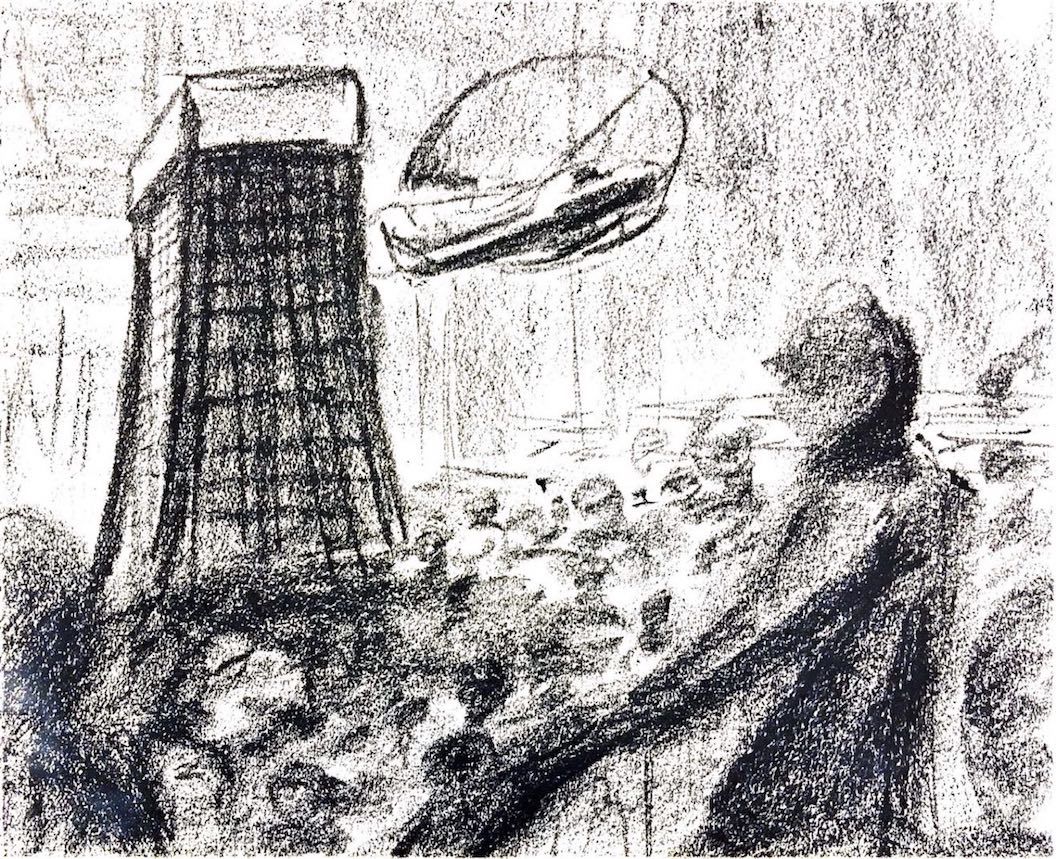 I think many people who live in Downtown Providence and on the East Side would be surprised to discover that a Fortune 500 weapons manufacturer is headquartered just off of Kennedy Plaza. Textron, which raked in $2.738 billion in profits last year for selling things like aircraft to the Israel Defense Forces, operates out of the nearest high-rise in the skyline. The corporation made a name for itself as a major weapons manufacturer during the Vietnam War—and massive profits. With a staff of 35,000 in 25 countries, making hundreds of different products for warfare, Textron is a mammoth operation. And it lives close by: It stands just across the street from the RISD library, a five minute walk from the Brown Public Health building. You would recognize Textron Tower immediately. It is that browning, blockish building—designed by the same architects as the Empire State Building—sleepily reminiscent of an old-moneyed America whose time has come and passed. You might be looking at it every day as you walk westward on George Street or catch a salvific glance at the sun setting behind the city.

In 1965, a decade into the war in Vietnam, the US set off a secret bombing campaign in neighboring Cambodia and Laos. The goal was to target North Vietnamese forces feared to be traveling down the Ho Chi Minh Trail and spreading communism in the region. The result was mass casualties and displacements that spiraled into further tragedies.

Some 150,000 to 500,000 Cambodians died under the carpet bombings. American B-52s dropped more munitions on Cambodia than had fallen in all of World War II. The Khmer Rouge communist guerilla group grew in time with people’s outrage over American aggression. Fearing it would lose Cambodia to communism, the US helped overthrow the Cambodian Prime Minister in 1970. A civil war ensued. When the Khmer Rouge stormed the capital as victors in 1975, they pointed to the sky and warned the city that the Americans were now going to bomb them too. Forced to become laborers under agrarian extremist communist rule, a fourth of the population—approximately two million people—died. The regime lasted 4 years, before Vietnamese forces pushed them out in 1979. This displaced millions. 260,000 Cambodians were resettled from Thai refugee camps overseas.

Laos too suffered a terrible fate. The US showered the nation with 2 million tons of ordnance—that is, a plane full of bombs every eight minutes, 24 hours a day, for nine years—making Laos the most bombed country per capita in history. Eighty million tons of ordnance remain. At least 20,000 Laotians have died from stepping on unexploded cluster munitions since. In what was described by the CIA as the largest paramilitary operation it has ever undertaken, the US capitalized on longstanding ethnic tensions in Laos by recruiting the Hmong to fight against the communist-aligned Lao. When Saigon fell, Hmong people became targets of extreme violence and continue to face marginalization in Laos to this day. 200,000 Hmong have fled Laos as refugees since 1975.

These are the forgotten offshoots of the Vietnam War. Even this incomplete titling of the conflict, “the Vietnam War,” reinforces the forgetting of these devastating proxy conflicts by framing the war as if it only took place in Vietnam. (Some academics say “Indochina War,” which uses a little-known, colonial term.) American political discourse has reified such obfuscation. Eric Tang, author of Unsettled: Cambodian Refugees in the NYC Hyperghetto, names the US government’s talk around their ensuing Southeast Asian resettlement program as “state-sanctioned amnesia and selective memory.” Without dismissing the reality of the Carter Administration’s concern regarding the humanitarian crisis, Tang is mindful of the opportunism of America’s intake of refugees. Particularly, he critiques this move’s attempt at “political vindication, justifying the much-maligned US intervention in Southeast Asia”—which looks all the less authentic when one considers the widespread urban poverty, unemployment, racism, criminalization, deportations, gangs, and housing crises asylum-seekers would come to know. Tang connects the militarization in Southeast Asia to the militarization of urban neighborhoods in the US, delineating refugees’ experiences of an unbroken, continuing state of war and capture. His ethnography is a testament to the remarkable resilience of Cambodian refugees in the face of state neglect and violence. Today, Vietnamese, Cambodian, Hmong, and Laotian Americans remain among the poorest ethnic groups in the US.

The Carter administration’s 1980 Refugee Act ushered in the largest refugee resettlement program in US history. Vietnamese, Cambodian, Hmong and Laotian émigrés spread across the nation. Many put down roots in Rhode Island, in places like Providence, Cranston, and Woonsocket. Those in Providence concentrated in poor neighborhoods like Upper and Lower South Providence, Elmwood, West End, and Olneyville. With some 12,000 residents tracing their histories back to these legacies (the majority of whom are Cambodian Americans, the next biggest group being Hmong Americans), Rhode Island is home to an especially high concentration of Vietnam War refugees.

Without a doubt, Textron owes its wealth to the Vietnam War. Originally a small Massachusetts textile company founded in 1923, “Special Yarns” expanded into a major manufacturer of parachutes and other textiles for the US government during World War II. Once those contracts fizzled, the corporation rebranded itself “Textron” (“tex” meaning “textile”) and began to absorb other types of companies. Textron's 1960 purchase of Bell Helicopter launched it into the war industry and into Vietnam. Its Bell UH-1 Iroquois Helicopter, affectionately nicknamed the Huey, was met with legendary success. The Huey was favored for its lightweight design, ability to navigate difficult, montane terrain, and efficiency for medical evacuation and close firing, and 7,000 flew in Vietnam. This was larger than the helicopter fleet of other any country in the world. Remembered as one of the few American successes of the war, the Huey has indelibly marked popular memory of the conflict. Perhaps no other aircraft has been so celebrated by Hollywood. You’ve seen it before: the Huey is the green, agile helicopter of Forrest Gump, Call of Duty, and Apocalypse Now (remember: “Ride of the Valkyries?”). There is even, in fact, a name for this trope: “Every Helicopter is a Huey.” The vehicle’s versatility and low cost make it the movie standard. Even when other helicopters are used, they might be dubbed over by the sound of a Huey. The Huey is so embedded in the popular imagination that it is probably what you’re hearing when you imagine the sound of a helicopter.

In 1972, Textron Tower completed construction in Providence. (This timing makes me wonder if the Tower was built on Vietnam War profits.) In the years since, the $14 billion company has branched out into an aerospace, automotive, and defense conglomerate whose myriad products range from specialized armored tanks to advanced information systems for intelligence agencies. Textron expands more by the year. So, too, does the American weapons manufacturing industry as a whole. With U.S. defense spending rising consistently from the Bush administration through to the present, the lucrative business of warfare is not going anywhere anytime soon.

I fell down this rabbit hole many months ago. I heard offhand from a professor that the last American company to stop producing cluster munitions bombs was headquartered in Providence. Textron was selling them for use by the Saudis in Yemen. Thanks to a marriage of Quaker-led local action and international pressure, Textron ceased production of cluster munitions in 2016. I immediately wondered if Textron had anything to do with the cluster munitions bombs that rained on Southeast Asia in the Vietnam War. Of course, I knew my logic was reductive. But I wanted to find the smoking gun; I wanted to draw a straight line from Textron, which enriched itself on the Vietnam War, to the refugees in Providence of that conflict living in the long, long shadow of Textron's own building.

I began a research project on all this for class. I scoured through weapons contracts from the 1960s. I started a book club on Tang’s Unsettled. I connected with a journalist of the weapons industry, anxiously scribbling notes as it dawned on me how tiny I was beneath this whole thing. I fell into anti–Southeast Asian American deportation activism after attending a community event at the Providence Youth Student Movement (PrYSM). I even visited Textron, though I never got past the lobby. (The security guard didn’t really know what to do with me. A suit laughed and shook his head, as if to say, “She’s never gonna get in.” I felt a little ridiculous. In hindsight, I should have also worn a suit.)

The irony of it all captured me: how war’s spiraling processes could make its profiteers and refugees unlikely neighbors, what war makes invisible (black and brown people) and hypervisible (helicopters!?), how war lurks in the terribleness beneath everyday life. In particular, how close war is, as much as mainstream America would like to forget it, to deem war as something that happens to other people, to a time that is not now, to a place that is not here. When I moved from Cambodia to the US for college, I thought I left the legacies of that war behind. And then I found that war is still proximate. It is a ten minute walk from the Main Green. It is 40 years ago, and it is right now, selling drones to the US air force in Afghanistan. Textron executives sit on the Brown Advisory Committee and Corporation. As urgent campaigns like Brown Divest have brilliantly laid out, Brown is invested in war. As a student there, where does this place me?

So what irony my bewilderment is loaded with: living on a hill of knowledge production that is deeply intertwined in a system of knowledge erasure, my surprise is an inevitable product of where I am standing. Indeed, for those here for whom this war is a daily reality, this story—of systems of power displacing them and their stories from public view—is wholly unsurprising.

Of course, I could not find the smoking gun. But I think this is the genius of the “defense” company (better, as many are now calling them, the “war” company): that there never is a smoking gun. There is just the gun. And without the smoke, apparently, the gun is no longer a “political instrument.”

Today, Southeast Asian Americans are facing increased deportations under the Trump Administration. Immigration and Customs Enforcement (ICE) has put some 16,000 people who were granted asylum as Vietnam War refugees and have since acquired criminal records at risk of exile to countries they may not even remember. Thirteen thousand of these mandates are for sentences already served. But the problem here is not one of individual “criminality,” but  of the bizarre logic of a state deporting back asylum seekers—many of whom fought for U.S. in the Vietnam War. For Vietnamese Americans, this represents the reversal of the state’s promise in 2008 that those who had arrived before 1995 were legally un-deportable.

After thinking through all these histories of war, it’s critical to ask: who gets to stay here, and who goes? The state invests in Textron’s growth, as it expels those it took in as refugees: people for whom the legacies of war are more than just capital, or realizations I can write about in an essay, but are lived realities and traumas that move intergenerationally. Even 40 years later, the war has never really ended.

TABITHA PAYNE ’20 is organizing a teach-in on Southeast Asian American Deportations with Brown, RIC, and RISD students at 5:30 PM, May 4th, at the Providence Youth Student Movement, 669 Elmwood Avenue, Suite B13.