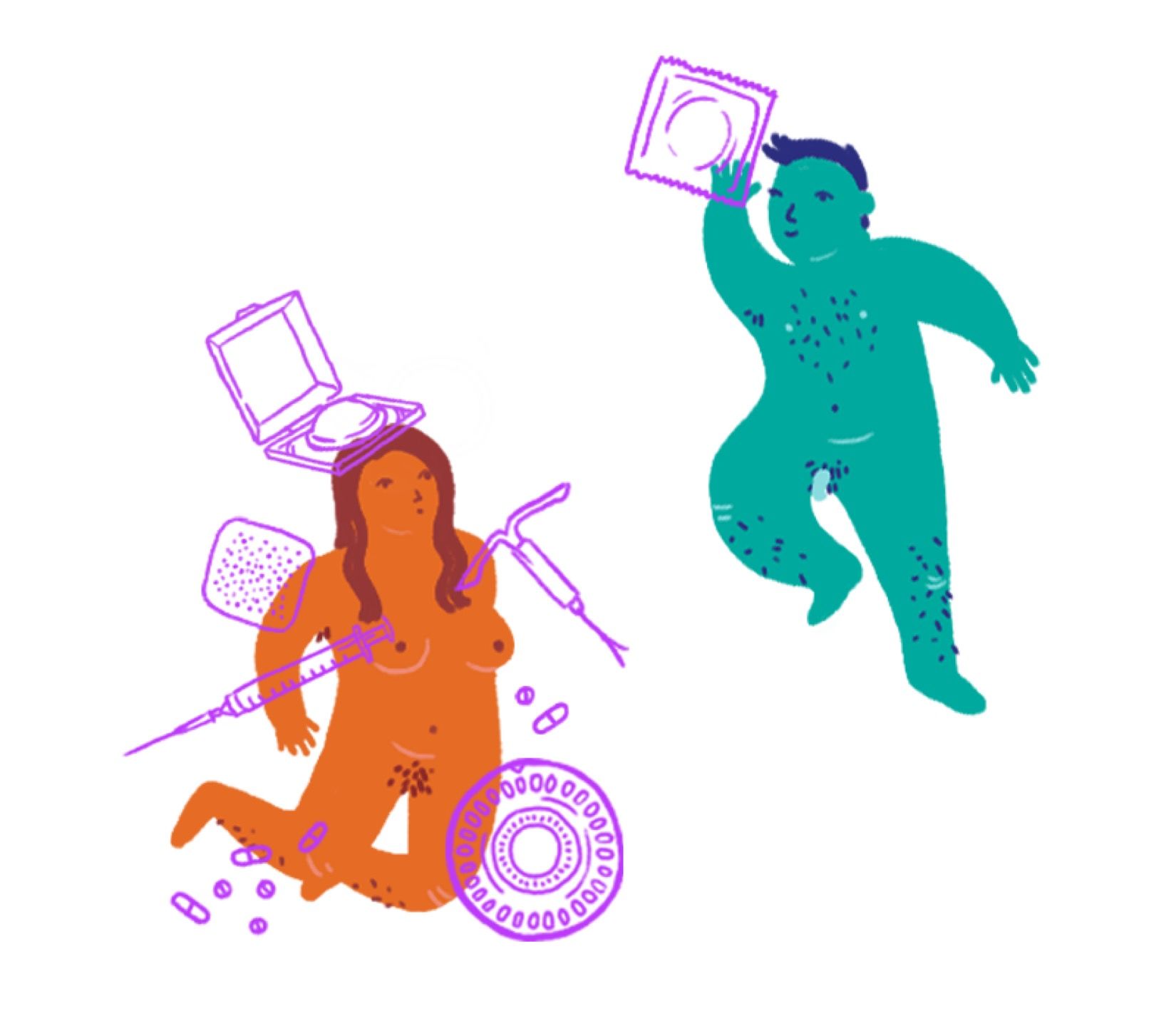 When patients come to Dr. Kelly Brogan MD, a Manhattan-based holistic women’s health psychiatrist, with complaints of low libido, insomnia, unstable mood, weight gain, hair loss, or cloudy thinking, one of the first questions she asks is, “Are you on the pill?” Like many feminists, Dr. Brogan used to think of birth control as a woman’s right. Despite having taken it herself for 12 years, during her medical training she became concerned about the pharmaceutical manipulation of the natural menstrual cycle, bringing her to the practice she runs today, where she urges patients to pick the lesser of many evils in their search for contraception. She advocates for patients to restore hormone balance and stabilize mental health by dropping the pill altogether.

The term “birth control” does not usually require a specification of gender; it is automatically assumed that it isn’t used by cisgender men. Aside from its uses to control a range of menstrual disorders that involve physical or emotional symptoms just before or during menstruation, birth control largely concerns individuals with uteruses as a form of pregnancy prevention. Even though they are only fertile a few days a month, the one with the womb must shoulder the responsibility of avoiding pregnancy. Meanwhile, people with penises are constantly making millions of sperm that can impregnate with each ejaculation.

There are a range of contraceptive choices for people with uteruses, including hormone-based pills, injections, and intrauterine devices, but condoms and vasectomies are the only contraceptive methods available to people with penises. This one-sided onus could be mitigated if there were not a wholesale delegation of contraception to females—male birth control could reasonably open doors for shared responsibility in avoiding pregnancy.

The hormonal male contraceptive is not a new concept. Researchers have been investigating options for people with penises since the 1950s, around the same time the pill was introduced for people with uteruses. From the very beginning, the search for birth control has been laced with eugenic political goals. Margaret Sanger's vocal support of the negative eugenics movement deeply complicates her legacy of advocating for the universal availability and legalization of birth control and establishing the first birth control clinic, now known as Planned Parenthood. She framed birth control and family planning as ways to combat unplanned births and limit the reproduction of minority communities. Her racist language and disturbing comments regarding disabled people convolute Sanger’s long-time advocacy for (some) women’s reproductive rights.

In 1951, Sanger’s urgency to curtail unplanned pregnancy motivated her to encourage endocrinologist Gregory Pincus to design a female hormonal contraceptive in his laboratory. Pincus began researching how he could use hormones to prevent ovulation, culminating with his discovery that the female sex hormone estrogen and progestin, a synthetic version of a natural female hormone, can compositely prevent pregnancy. The metabolism of these hormones elevates the body’s level of progesterone, which convinces the body that it is perpetually pregnant. Mimicking the body during pregnancy, the pill disrupts the normal menstrual cycle and stops the typical production of reproductive hormones, thereby hindering the release of eggs from the ovaries. This finding resulted in the production of Enovid, the first female birth control pill, which was approved by the FDA for menstrual disorders in 1957, with the convenient side effect of preventing pregnancy, and explicitly for contraceptive use in 1960.

Pincus sought a hormonal analog for males by the same logic of using progestin to disrupt the production of sperm. Although Pincus reached inconclusive results, scientists today continue to search for a male hormonal birth control by focusing on suppressing spermatogenesis—the origin and development of sperm cells within male reproductive organs. Given that the average penile ejaculation contains between 40 million and 1.2 billion sperm, a male contraceptive must reduce that sperm count to levels that can reliably prevent fertilization. Although the ideal hormonal contraceptive would generate ejaculate completely free of sperm, studies so far have demonstrated that reducing sperm concentration to less than 1 million per milliliter of ejaculate is low enough to produce only one percent risk of pregnancy.

Since Pincus’s attempt, research has identified that the addition of exogenous testosterone signals the suppression of sperm production. Supplementing testosterone with progestin can further enhance that sperm suppression. But the delay in putting otherwise successful male contraceptives on pharmacy shelves lies in subject-reported side effects: loss of libido, fatigue, acne, fatigue, hair loss, and erectile dysfunction. These side effects bear an undeniably strong resemblance to the side effects experienced by females taking hormonal birth control. In males, however, it’s been enough to forestall birth control production.

In October 2016, the Journal of Clinical Endocrinology & Metabolism published the first multicenter, international clinical trial on the efficacy of a male contraceptive. The study administered a hormonal injection every eight weeks containing a regimen of testosterone undecanoate and progestin to 320 male participants aged 18 to 45. For most participants, their sperm count per ejaculate was reduced to the demonstrated effective level at 24 weeks, at which point the participants and their partners were instructed to stop using other forms of birth control. In the next phase of the trial, there were four pregnancies––according to the study, a 96 percent effective rate.

In the course of this study, 20 participants discontinued due to product-related side effects, including acne, changes in mood, pain or panic at first injection, and erectile dysfunction. Several participants experienced serious adverse effects, and in one case, a participant committed suicide. Though researchers concluded that 39 percent of the adverse effects reported (including the suicide) were not due to the injections—and 75 percent of participants reported willingness to use this contraception method again—two committees concluded that the injection was unsafe. This resulted in the study’s early termination, a disappointing setback in the ongoing hunt for a male contraceptive.

Luckily, there are several current promising studies of male contraceptives in the form of pills, gels, implants, and injections. On March 25, a team of scientists co-led by Dr. Christina Wang at the Los Angeles Biomed Research Institute, and Dr. Stephanie Page, Professor of Medicine at the University of Washington School of Medicine, presented the results of the first phase of a study that could potentially conclude with the long anticipated, inaugural male pill. Involving 40 participants with penises, the study looked at the safety, rather than contraceptive efficacy, of the pill. While there were similar mild side effects, unlike in previous studies, no one reported serious side effects or dropped out. Wang and Page are also leading another promising study—a large clinical trial in nine countries involving over 400 participants to test a gel contraceptive, known as the NES/T gel. This gel uses Nestorone, a type of synthetic progestin, along with testosterone. Participants with penises apply the hormonal gel to both shoulders once a day.

Although these studies are encouraging, Wang predicts that a viable option will not be approved by the FDA for at least another decade due to tedious regulations. Research is also largely curtailed by minimal male interest because of cultural attitudes around the responsibility of pregnancy, the socially constructed relationship between manhood and fertility, and basic fear or refusal to experience side effects. Many cisgender men having heterosexual sex are reluctant to try birth control, and this is evident in the disproportionate number of people with vaginas undergoing the only existing contraceptive procedure—sterilization. According to 2015 estimates from the United Nations, vasectomies are only half as common as female sterilization in the US despite the fact that the two procedures are equally effective and vasectomies are less invasive and risky. Apathetic attitudes also contribute to an overall lack of industry interest, which creates a challenge to get pharmaceutical companies on board and finance these studies.

Even with a male contraceptive on the market, some females might feel uncomfortable trusting that their sexual partner is covered. When Pincus first started looking into a male option, Sanger and Katharine McCormick (one of the primary donors to the research project) were not interested in creating a male pill. Sanger thought that if male birth control options were introduced, women would have less agency despite their ultimate role in the pregnancy. In 1938, Sanger argued that the introduction of birth control would place “the burden of responsibility solely upon the husband—a burden which he seldom assumed.” Birth control does enable people with uteruses to have agency over their bodies—giving them control of when (and if) they want to have children without unrealistically sacrificing their ability to have sex, and allowing them to pursue an education and make career advancements.

Despite these benefits, the decision to be proactive about pregnancy prevention can feel like an unreasonably heavy onus for one person to carry when intercourse requires two individuals. Each contraceptive involves a trade-off: opting for the non-hormonal copper IUD can result in heavy bleeding and severe cramps once a month, while choosing the pill can cause acne, weight gain, or mood changes. A Danish research study even determined the increased relative risk for depression by each hormonal contraceptive method, with 23 percent for combined oral contraceptives and 34 percent for progestin-only pills. In light of male contraceptive studies being halted due to the same side effects that female birth control, the continuous oversight of pain and discomfort can have an extremely demoralizing effect on people with uteruses—ultimately, another instance of systemic erasure, dismissal, and disbelief of the pain of people with uteruses.