As Seen From Above 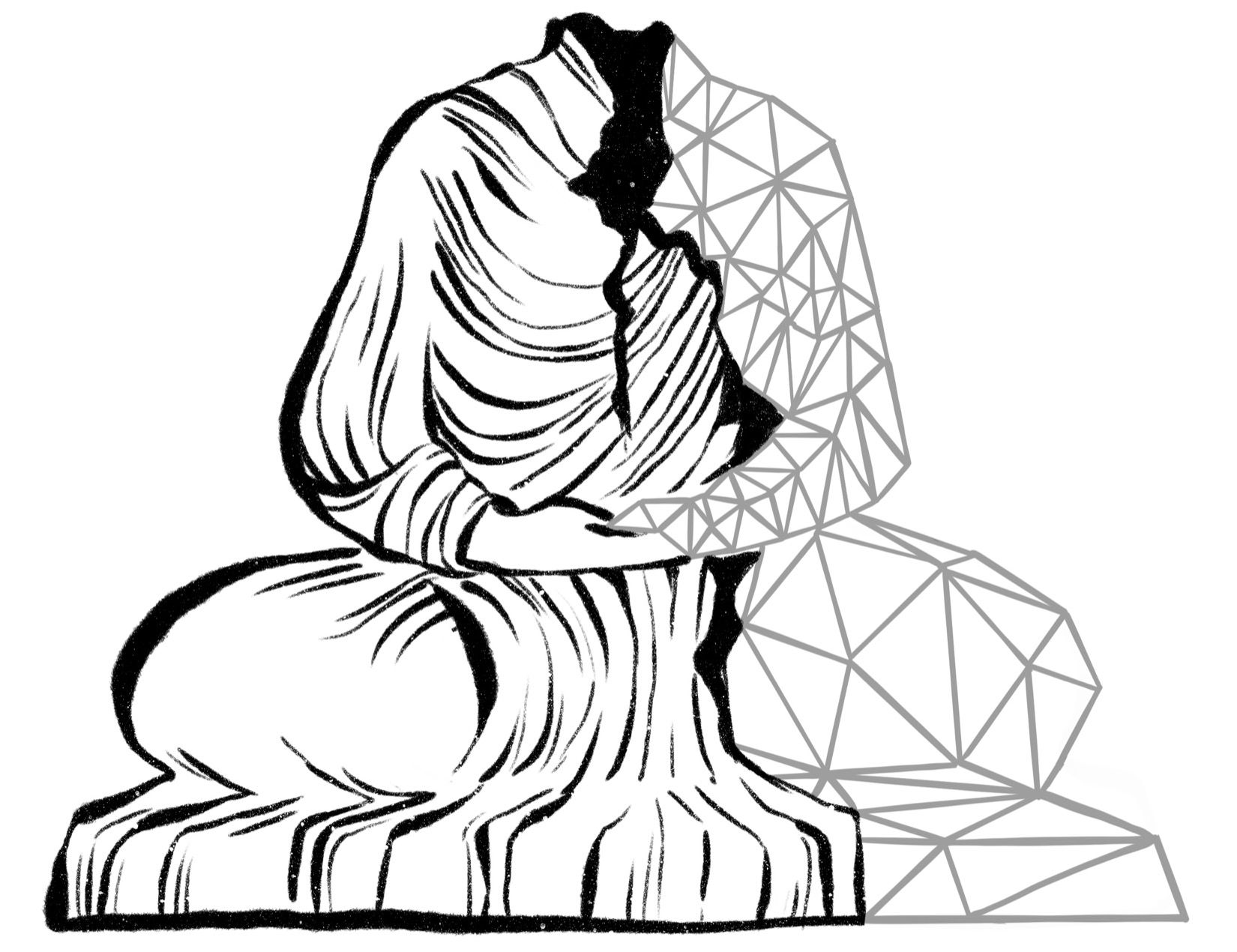 In a dusty, treeless valley south of Kabul, Afghanistan, the ancient walls of Mes Aynak almost blend into the surrounding earth. Larger-than-life sized Buddha statues rest in alcoves, most weathered over time to only a seated torso or a lone foot, but some stand tall. The complex of brick and earthen structures stretches out over 450,000 square meters of rolling countryside. For more than 10 years, a team of dozens of Afghan and international archaeologists assisted by hundreds of Afghan laborers have been working to uncover this ancient site along the Silk Road, home to an ancient Buddhist monastery dating to the 3rd century CE. But this is no ordinary excavation. Surrounded by more than one hundred checkposts and patrolled day and night by 1,700 guards, Mes Aynak sits atop the second largest untapped copper deposit in the world, with more than 12.5 million tons estimated to lie beneath the surface.

An attempt to mine the site has met resistance from archeologists and activists who claim that mining would destroy undiscovered relics and irreplaceable cultural heritage. But recently, a French startup called Iconem has used drone photography and computer vision algorithms to extensively document the site and construct a detailed digital recreation. Founded by architect Yves Ubelmann, Iconem has documented endangered historic sites around the world in the name of preservation, but its work to record Mes Aynak digitally may actually threaten the site itself. By positioning its digital Mes Aynak as a more durable, more useful version of the real thing, Iconem raises questions about the evolving relationship between the digital and the physical.

Mes Aynak means “little copper well” in Pashto. This is an understatement. Rediscovered by modern archaeologists in the 1960s, the history of the Buddhist monastery complex at Mes Aynak is intimately linked to the copper deposit beneath it. Archaeological evidence suggests that the ancient Buddhist monks who lived here mined and refined copper, a trade that made them wealthy and enabled them to build a large monastery with fortifications. Their buildings remain today as an archaeological site strewn with ancient relics. Among the walls of temples and battlements, thousands of ancient Buddhist artifacts have been unearthed. The site is a wealth of information about ancient Afghanistan.

In 2007, the Afghan Ministry of Mines awarded the Metallurgical Corporation of China (MCC) the right to mine the site at Mes Aynak for nearly $3 billion. The 30-year lease agreement included a promise to build infrastructure in the region, including roads, a railway, and an electricity plant. The purchase is part of a broader push by Chinese companies to make inroads into mining and resource extraction in Afghanistan that includes a plan for three large oilfield in the northwest of the country. Driven by increased manufacturing demand at home, Chinese firms are trying to take advantage of the combination of Afghanistan’s immense resource wealth and US-led stabilization efforts in the country.

Pushback to the sale of Mes Aynak came immediately. Afghan cultural heritage activists and archeologists claimed that open pit mining like what was proposed by MCC would lead to the permanent destruction of the historical site at Mes Aynak. Open pit is one of the simplest forms of mining, and also one of the most disruptive. It involves digging a large, wide hole to extract minerals that are close to the surface. Because some of the copper deposit at Mes Aynak is located directly beneath the monastery, an open pit mine would require that the archeological site be razed to access the copper underneath it.

In response, the Afghan Ministry of Mines agreed to delay the project. Disagreement over the terms of the deal between the ministry and MCC as well as safety also likely contributed to the delay of mining, which was scheduled to begin in 2012 but has yet to start. Rocket attacks by the Taliban have disrupted work on the site, and leftover Soviet and Al-Qaeda landmines remain a danger for archaeologists and workers on the ground. These hazards are part of the reason that Iconem cites for using digital archeology. In a blog post about the project, Ubelmann writes that in light of anti-personnel mines strewn around the site, drone photography represents “the only possible technical solution” and that “it allows us to scan the whole mountain from far away, without putting ourselves at risk.”

Before the MCC deal, not much formal archaeology had been conducted at Mes Aynak. While looting of ancient Buddhist artifacts was common, it had never been the subject of any preservative excavation. The MCC deal led to renewed archeological interest in the site. “If it will not be destroyed by mining, it will be destroyed by looting,” said French archaeologist Philippe Marquis in an interview with National Geographic. Instead, he said, it would be better to document the site now. In 2009, after the Ministry of Mines agreed to delay the project, Marquis led a team made up of both Afghan and international archaeologists to excavate Mes Aynak.

Since then, more than 2000 artifacts have been found at the site, including coins, pottery, statues, and other artworks. So many, in fact, that archaeologists are struggling to find safe places to keep them. Many have been sent to museums in Kabul, but for lack of space most are simply being kept in piles onsite. Large Buddha statues up to eight meters tall simply cannot be moved. Without proper preservation, artifacts are in danger of degradation and theft by looters. The ongoing excavation at Mes Aynak is one of the major factors stopping the destruction of the site and the beginning of mine construction.

In 2010, the Afghan Ministry of Mines brought in Iconem to document Mes Aynak. The startup has documented hundreds of sites, many of them in the Middle East. Iconem’s founder, Yves Ubelmann, was trained as an architect and became inspired to pursue preservation after studying ancient buildings in Afghanistan, Iran, and Syria. One of Iconem’s stated goals is to “document humanity’s most precious places to ensure their preservation for future generations.” Many of Iconem’s projects involve sites that are in danger of being destroyed or damaged. “These are the sites we need to protect the most. If we lose them, we lose all evidence of their history, of lives lived,” Ubelmann said in an interview with Reader’s Digest.

Iconem uses a technique known as photogrammetry which uses an artificial intelligence algorithm to stitch many photographs together into a single 3D model. Combining this process with overhead drone photography and documentation on the ground, Iconem has been able to create incredibly detailed models of historical sites.

The company has undertaken other large-scale projects, including the digitization of the entire Greek island of Delos. Iconem has also modeled parts of the ancient city of Palmyra, which has allowed them to digitally reconstruct monuments that were partially destroyed by ISIS between 2015 and 2017.

The models are fascinating. Not only photorealistic, they are fully rendered in 3D and can be viewed and manipulated on a laptop or using a virtual reality headset. They can be viewed from from overhead or zoomed in to a miniscule level of detail. Iconem claims that they allow viewers to experience the sites as if they were really there. And their work certainly seems to be more immersive than traditional representations of archaeology, which rely mostly on words and still images. But by claiming that their digital model allows viewers to experience Mes Aynak in a way that approaches the experience of the real site, Iconem betrays the dangers inherent to immersive digital representations of reality.

Iconem was brought in by the Afghan Ministry of Mines to scan the site at Mes Aynak not simply to help preserve the site, but rather to create a digital copy that could serve in the place of the site itself. Blogging about the process of documenting Mes Aynak, Ubelmann writes that digital modeling “gives an overview of all the archaeological discoveries” that have been made at the site, and “even [makes it] possible to study reliefs located in areas not yet excavated.” Implicit in Ubelmann’s vision is the idea that a digital representation, sufficiently advanced, can begin to meaningfully replace the original. While traditional methods of representing archaeological discoveries merely represent artifacts and locations, Iconem’s work is a significant step towards digital representations that claim to give the same experience as the original.

Because of this assertion of the fidelity of their models, Iconem’s work at Mes Aynak might actually undermine efforts to preserve the place itself. By creating a digital version of the site and positioning it as an adequate replacement for the real thing, Iconem gives cover to MCC and helps them move forward in the construction of the copper mine. Unlike the work of more traditional archaeologists, Iconem’s models of Mes Aynak serve to undermine rather than support efforts to protect the site from destruction.

This effect is not new; it is familiar to the world of art and literature. Starting with the invention of the printing press, authors and literary theorists have recognized that the ability to make copies of a work of art undermines the value of the original. This effect was renewed by advances like lithography and photography. It grew by an order of magnitude with the advent of digital information and the internet. New technologies are breaking down the barrier between digital and physical: Techniques like Iconem’s photogrammetry bring physical objects into the digital world, while 3D printing and augmented reality work to bring the digital world into the physical. These advances have the potential to carry the devaluation inherent in digital reproduction into the real, physical world.

Proponents of mining at Mes Aynak in the Afghan government and at MCC have argued that the destruction of the archeological site is justified by the economic benefits that a mine would provide to an impoverished part of Afghanistan. Over half of the population of Afghanistan lives below the poverty line, and Afghan officials have estimated that the mine would add more than $1 billion to the country’s economy. The project would build infrastructure near the mine, and create hundreds of well-paying jobs for locals. However, there are other mineral deposits in Afghanistan that could offer similar benefits without the destruction of a historic site. Or, a less invasive style of mining might be able to preserve the historical site while allowing access to the copper deposit underneath.

Iconem’s efforts also raise questions of who can and should benefit from the preservation of cultural heritage. Saving the site could help to make it a destination for tourism that benefits the local economy, much like Afghanistan’s Bamiyan Buddha statues before they were destroyed by the Taliban in 2001. However, tourist traffic could itself cause wear and damage that threatens the preservation of the site. Digitization by Iconem might preserve Mes Aynak for future research by archeologists and people with high speed internet access, but for locals the site would be gone forever. Iconem’s work serves to make cultural heritage more accessible to academics and museum-goers at the expense of the site itself and those who live near it.

The growth of less developed countries should not come at the cost of their cultural heritage, which is also the heritage of the world. Iconem helps to resolve this tension by allowing for a kind of cultural preservation without limiting the extraction of natural resources. However, by portraying its models as faithful reproductions of physical sites, Iconem is jeopardizing the very places it is trying to save. As new technology moves closer to breaking down the barriers between digital and physical, archeologists and technologists alike will have to contend with the consequences.