a restaurant in East Providence 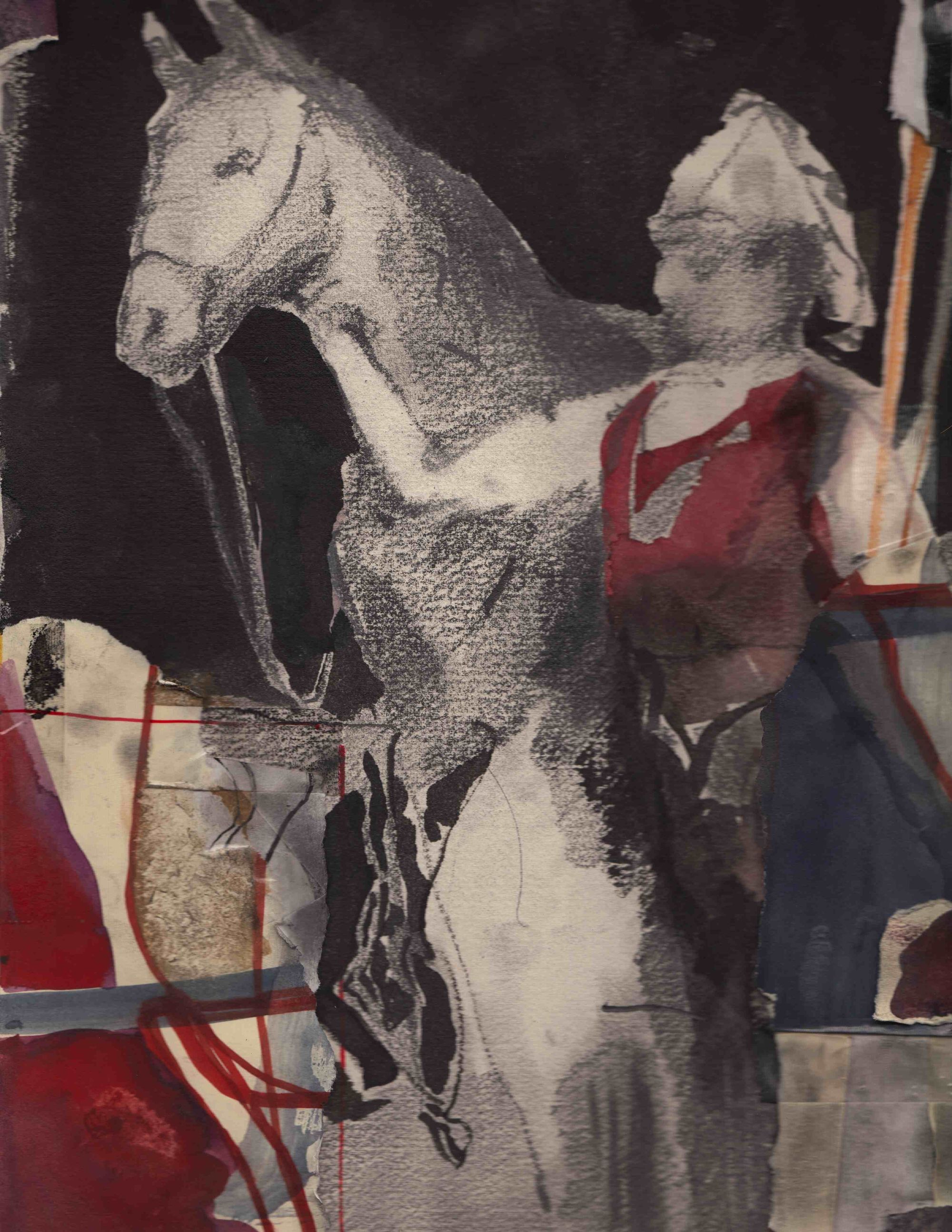 Just after exiting I-95 onto Warren Avenue in East Providence, a sign stands tall above the street: Campino: Portuguese and American Cuisine, it reads, decorated with a wine glass on top and a bunch of grapes below. The building itself lies deeper into the street side with ample parking space in front for patrons. American and Portuguese flags line the glass façade on either side of the entrance. I am here with a former professor, Onesimo Almeida, who offered to drive me and introduce me to the owners.

This is a quiet time for the restaurant, a little before the lunch rush hour. A couple of men sit nursing their drinks and watching the news on the flat screen TV. One of the men is owner David Mathias. Our conversation lasts only a couple of minutes, but during that time David greets more than five people that walk in and settle down at the bar. “Many of the regulars will swing by just to sit there, sipping on the occasional drink and watching TV,” he says. “They know that if they come by, people they know will be here.” It gets quite busy at around 2:00 PM, as small parties of three or four arrive and settle down in the main dining room.

After asking David if I can take a couple of pictures, I walk outside to discover a group of five or six men sitting at the table near the entrance. All have drinks in front of them and are chatting loudly in Portuguese. “How about a picture of the regulars?” “Absolutely.” After the picture, I linger to ask them a couple of questions. They tell me that hanging out at Campino is very much like hanging out at a friend’s dorm room. “That’s why we come here and sit here, outside. To talk to friends, relax, have a drink.”

Over lunch, I ask Onesimo, himself originally from the former Portuguese colony of Azores, why he comes to Campino.“The food, of course. It’s as Portuguese as it gets and I miss it. So, I come here often with my wife and we enjoy a little slice of home.” Today he is having Bacalhau na Braza, a grilled codfish dish with olive oil in a garlic sauce. I went with the Alentejana, a stew made up of potatoes, pork chunks, and littlenecks in a thick sauce.

Sitting at the bar, David tells me that the restaurant was not always the busy hub that it is today. “When we first opened in 2004, we were struggling to make a profit. That was mainly why I invited Umberto to come cook for me. He was a bartender at Sol Mar, another Portuguese restaurant on the East Side.” As he tells me this, he points to a small photograph above the liquor shelf. It’s a picture of a very young Umberto, sporting a full head of black hair, behind the bar at Sol Mar. “See if you look closely, you can see me sitting at the bar. That’s how we met.” Umberto’s cooking was the main reason for Campino’s big break.

“i don’t live around here, but I knew that the neighborhood would appreciate a Portuguese restaurant, and I was right,” David tells me. Rhode Island is home to the third largest Portuguese-American community in the US, a large part of which is Cape Verdean. The mid-20th century marked the biggest wave of immigration, bringing many Portuguese-speaking populations to America from countries like Angola, Cape Verde, and Mozambique. The clientele at Campino is a mixture of Portuguese and Cape Verdean.

As Onesimo cleans his codfish with habitual ease, I ask about the dynamics between the Portuguese and Cape Verdean communities in Providence. “I wouldn’t say there’s pronounced animosity, but there are some old tensions.”

The previously uninhabited islands of Cape Verde were discovered and colonized by the Portuguese in the 15th century, and became important in the Atlantic slave trade for their location. When Cape Verde gained independence from Portugal in 1975, many Cape Verdeans were wary of breaking away from Portugal. “Being part of the empire for so long, they considered themselves to be bona fide Portuguese, a lot of them still do, actually. They could not fathom a life outside the framework of the Portuguese state,” Onesimo tells me.

Before they immigrated to the United States, there was little contact between the Portuguese in Portugal and the Portuguese in the colonies. “When they came to the US they ran into one another in a country at a time where racial issues were extremely salient,” Onesimo says. Cape Verde has an estimated population of 500,000 people, most of whom are creoles, people born in Cape Verde of mixed Portuguese and African descent; most Cape Verdeans speak a creole that combines Portuguese and West African languages rather than the country’s official Portuguese. Many white Portuguese immigrants interacted with Cape Verdean creoles for the first time when they came to the US. “Living in America in the ’60s and ’70s they began to see the differences between one another. A distinction grew immediately between the Portuguese of color from Cape Verde and the white Portuguese from Portugal.”

Not long after my visit to Campino, I found myself working alongside a Cape Verdean woman named Guadalete in the Brown Dining Services Bakeshop, cutting bread into little cubes for an event on campus. I ask her how much of the divide Onesimo mentioned is still present. “It’s still very much true. A lot of white Portuguese see us black and different from them. There are times when they’ll avoid brushing past you in the street.” The hostility is not confined to the US, however. Guadalete’s brother visited Portugal with his family about a year ago on his way to Cape Verde. “His son’s skin is very dark, darker than mine. They were taking a walk and this Portuguese woman was sitting on the porch of her house. My brother heard her say, ‘Look at that black monkey’ as they walked by. She was talking about his son.”

Back at the restaurant, not much time has passed since my conversation with Onesimo on this very conflict, when three construction workers from a site nearby, walk in to have their lunch break. The party is made up of one Portuguese man and two Cape Verdeans. They chat fast and loud in Portuguese. Their voices are full of laughter and the kind of temporary relief that comes with being on one’s lunch break. The trio leaves the restaurant amidst a flurry of shaking hands and greetings being shouted by the men at the bar. This is not the first time they have come here for their break.

Umberto, the cook, is a shy man. I ask him for a picture when he was sitting outside, having joined the regulars for an afternoon drink. His friends don’t miss the opportunity to pick on him a little, throwing around jokes about how handsome and photogenic he is, as he gets ready to pose. Umberto immigrated from Cape Verde to the United States in 1983 when he was 21 years old.

Umberto lived in New Jersey at first, but came to Providence after a friend of his opened Sol Mar and invited him to work there as a bartender. He met his wife and cooking partner, Lucia, when she was dishwasher at the restaurant. At the time Umberto met David, he was struggling to keep Campino open. “He had changed so many managers already and couldn’t figure out what wasn’t working. I had never cooked before except for myself, and then I learned by working with some excellent chefs at Sol Mar. After that I went to Johnson and Wales for culinary arts and there I learned even more.”

Umberto tells me that one of his favorite dishes to cook is the Alentejana I had for lunch. “It is a little different from how you would have it in Portugal. There they don’t have any sauce. In America we have to add the sauce ‘cause people here like it like that.”

I ask Umberto about Portuguese-Cape Verdean relations, and he speaks deliberately and carefully. “I think the relationships are good, I think there is a lot of respect. The Portuguese couldn’t take much from Cape Verde, but what they gave us was good for us. We speak their language and that’s why we get along very well. They respect us, we respect them.” He does not get the chance to cook Cape Verdean food often, although sometimes clients will call in to make a specific order. “Portuguese food and Cape Verdean food are very different, here we only make Portuguese. Cape Verdean food is very heavy with spices and meat.”

After my interview with Umberto, David offers to give me a tour of the rest of the restaurant. Adjacent to the bar is a medium-sized dining room, beautifully lit, with a single dining table that might sit ten people comfortably. “What’s that?” I ask pointing to a mosaic tile hanging on the far wall. “Oh that’s the Campino. It’s a piece we bought in Portugal.” The mosaic depicts a medieval Portuguese farmer on horseback standing in a cornfield. “It’s a funny story, I was initially told that Campino meant ‘a small piece of land’ in Portuguese,” David says. As it turns out, a Campino is a cattle herder in the Portuguese region of Ribatejo, or as David puts it, “the man in charge of the small piece of land.”

David’s small piece of land stands amidst a considerable number of Portuguese restaurants on the East Side. It is a space of coming together for part of the community. Umberto takes his food very seriously and this is reflected in the restaurant’s success. Campino does not try to be the place, but rather, a place. A small slice of land where you can witness a small slice of life.