This week, the Indy News section begins a two-part series on the occupation of Kashmir, focusing on narratives that both Western and South Asian mainstream media outlets often overlook. Check back next week for a piece about the Indian state’s enforced disappearances of Kashmiris. 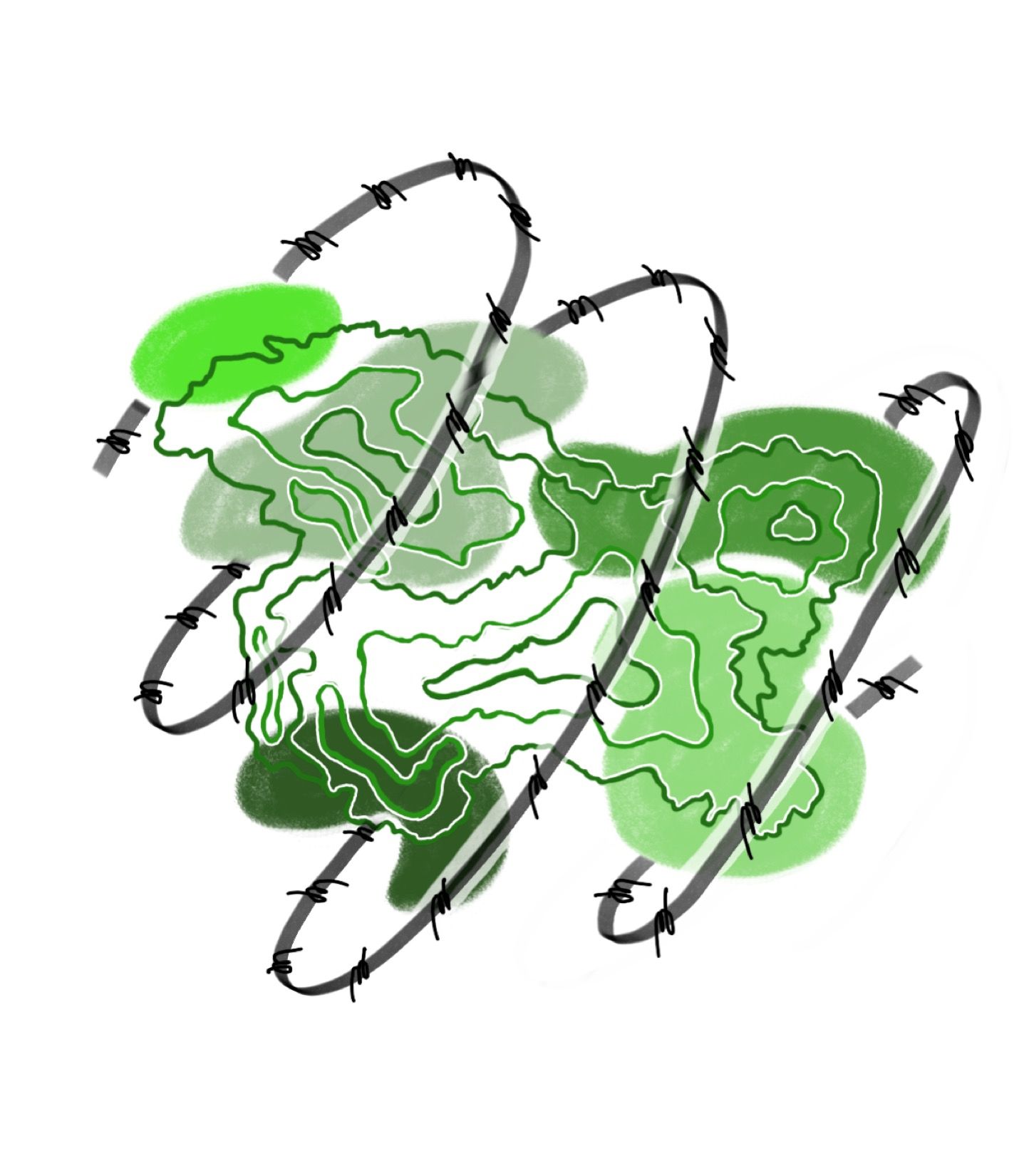 Military barracks line both sides of the airport runway in Srinagar, the capital city of the Indian-occupied state of Jammu and Kashmir. The airport is full of policemen and soldiers, closely monitoring travelers passing through. The Srinagar airport, with its constant surveillance, is a microcosm of the region, where life is colored—if not completely dictated—by army occupation. Day in and day out, Kashmiris travelling by foot, bus, and car are stopped and asked to show their IDs. The prevalence of military checkpoints serves as a constant reminder that the Kashmiri people live under a military occupation and that their presence in their native land requires verification by the Indian Army. Curfews, hartals (mass strikes), and internet shutdowns, sometimes lasting months at a time, have all become routine in the region.

Jammu and Kashmir (J&K) is the most militarized zone in the world with over 700,000 troops stationed in the region. The presence of the military is a stark reality with army cantonments and soldiers with AK-47s juxtaposed with quotidian restaurants, stores, parks, and private homes. The Indian military is protected by the draconian Armed Forces Special Protection Act (AFSPA), a colonial era law that grants special powers to the Armed Forces in so-called “disturbed areas.” This law has been put into effect in regions throughout India, like Assam and Manipur in the northeast in 1958, Punjab in northwest India in 1983, and Jammu and Kashmir since 1990. AFSPA endows virtual immunity to the Indian Army, which has not been held accountable for gross human rights violations including enforced disappearances, pellet gun shootings, mass murders, and rapes. Living under such repressive rule has deeply affected the social fabric of Kashmir.

I spent part of my summer in 2018 in Srinagar as fieldwork for my senior thesis in Anthropology. This article is based on my research and experience and the lived reality of Kashmiris who shared their perspectives with me.

Military occupation is not restricted solely to the physical presence of the army; it seeps into every aspect of life in Kashmir, including food and agriculture. In 1947, when India and Pakistan gained independence from the British, Kashmir was primarily self-sufficient, meaning that everything that was consumed was produced in the region itself. The state’s only imports were salt, tea, and clothing from Central Asia and modern-day Afghanistan and Pakistan. Additionally, Kashmir exported three times more goods than it imported. Since then, that figure has changed tremendously. Kashmir now imports seven times more goods than it exports. Military occupation has transformed Kashmir from a trade surplus to a trade deficit region, ripping away its status of self-sufficiency.

Kashmir imports even basic necessities such as rice, the staple grain of the region. In fact, rice functions as a pertinent lens for examining the military occupation. Since 1947 and the creation of borders in the region, Kashmir has been forced to trade solely with India. One of its major imports from India is rice from Punjab, which is significantly cheaper than rice produced in Kashmir, as it is grown on a large-scale using industrial methods. Due to its economic viability, Punjabi rice is quickly replacing the consumption and production of Kashmiri rice. This demonstrates that occupation has not only affected the people of Kashmir, but has also impacted the agriculture and economy of the region.

“Batt-e khyowa?” meaning “Have you eaten?” is a question that most Kashmiris are familiar with. After greeting friends and family, it is custom to ask whether they have eaten. The word “batt-e” here stands for meal. The word “batt-e” also means “rice,” which shows the centrality of rice to a Kashmiri meal. Moreover, “batt-e” is crucial to people’s identity. As my friend and colleague Qadir told me, “We Kashmiris are a rice-eating and rice-producing people.” Qadir added that Kashmiris are incredibly attached to their land: a land that grows various fruits, vegetables and rice. In fact, most Kashmiri homes, including some in the capital city of Srinagar, have a plot of land meant for subsistence agriculture, where the family residing in the home grows a small amount of food for their consumption.

Rice is a labor-intensive crop that requires immense care by the farmer. Rice is also a water intensive crop and is particularly suited to Kashmir, which is a mountainous region abundant in rivers and streams. Although the state continues to grow rice, according to official records, the amount of land under agriculture has decreased considerably, from 163,000 hectares in 1996 to 141,000 hectares in 2012—a loss of 22,000 hectares over 16 years. Going by these numbers, Kashmir is losing an average of 1,375 hectares of agricultural land per year. Instead, Kashmiris are now eating rice grown in Punjab, a state in the northwest region of India. Punjabi rice, which is viewed as synonymous to Indian rice, is significantly cheaper than rice grown in Kashmir, as it is mass produced with chemical fertilizers and pesticides. However, this was not always the case.

Because of its optimal weather and abundant fields, Punjab was chosen in the 60s for a large-scale agricultural industrialization program known as the “Green Revolution”, which completely changed how agriculture was practiced in the region as it transformed from small-scale subsistence farming to industrial agriculture that involved the usage of chemical pesticides and fertilizers. This program was driven by the Ford and Rockefeller Foundations in conjunction with the World Bank and the Indian government. During this period, the Cold War, with the US on one side and the USSR on the other, was at its peak. While India, a part of the Non-Aligned Movement, was officially neutral, this was a time of powerful peasant and working-class mobilization across the country. Alarmed by growing peasant movements in India and other newly independent countries around the world and hoping to prevent the spread of communism, the above-mentioned institutions offered the “Green Revolution” as an alternative to the “Red Revolution” of the USSR.

The Green Revolution was part of a worldwide phenomenon that began in Mexico and then translated to various countries including India, Brazil, the Philippines, Malawi and Guinea. These changes involved an industrialization of agriculture and the usage of chemical pesticides and fertilizers as well as technologies such as tractors and mechanized irrigation. Importantly, the Green Revolution included the introduction of “HYV” or High-Yielding Variety seeds. HYVs were laboratory developed rice and wheat seeds that were designed to yield over twice the amount of crop as compared to regular seeds.

However, while these seeds were more productive, and brought in immense revenue, they necessitated large amounts of water in the form of mechanized irrigation. In addition, HYVs were not suited to the environment of Punjab and needed huge quantities of chemical fertilizers and pesticides to assist in their growth. These pesticides included toxic chemicals like DDT and endosulphan that have now been banned globally.

The introduction of such harmful chemicals in large quantities has caused horrific and devastating consequences. Thousands of Punjabi residents are now suffering from fatal diseases including various kinds of cancer. According to an NBC report, the state of Punjab has the highest cancer rates in the entire country. Further, Punjab is home to the “cancer train” which runs from Bathinda to Bikaner carrying cancer patients and their relatives to the Acharya Tulsi Regional Cancer Hospital in Rajasthan. Although the “Green Revolution” is often touted as a success story because it transformed Punjab into the “grain bowl” of India, its costs were disastrous as it also transformed the state into the “cancer capital” of the country.

Under the occupation, Kashmir serves as a market for rice produced using industrial techniques in Punjab which is cheaper than rice produced using indigenous methods in Kashmir. This has significantly affected Kashmiri rice, the production and consumption of which is deeply tied to Kashmiri identity. Moreover, it carries numerous health risks for the consumer as evidenced by the catastrophic after-effects of the Green Revolution in Punjab.

Kashmiris are fully cognizant of this change in their food and agriculture and its deeper significance to their personhood. Many Kashmiris I met with spoke of the brutality of the army and how they would trespass on their fields and sometimes even burn their crops. They spoke of an environment of deep threat and insecurity and how they often feared leaving their homes to go to their fields and orchards.

Additionally, they spoke of how instead of eating Kashmiri rice which is dense and nutritious, they now consume Punjabi rice which, despite being cheap, is light and unfulfilling but more importantly, is contaminated with “poison.” “Poison” here refers to chemical fertilizers and pesticides used in rice production in Punjab. Some drew a larger connection between the brutality of the occupation and poisonous Punjabi rice and spoke of how the state of India is not only violating them through enforced disappearances and extrajudicial killings and violence but is also targeting them by feeding them poisonous and contaminated food.

Most often, the conversation returned to the cruelty of military occupation. When I asked Imtiyaz, who runs a retreat in Kashmir, how the current circumstances have affected food and agriculture, he flipped the question and responded, “How can we even think of food when our necks are being strangled?” stressing the gravity of military occupation and the fact that under it, people’s basic human rights are mercilessly violated. In a place like Kashmir, food, agriculture, and the economy cannot be separated from human rights and military occupation since they are all inextricably intertwined.

KUDRAT WADHWA B’19 believes that everything is political.