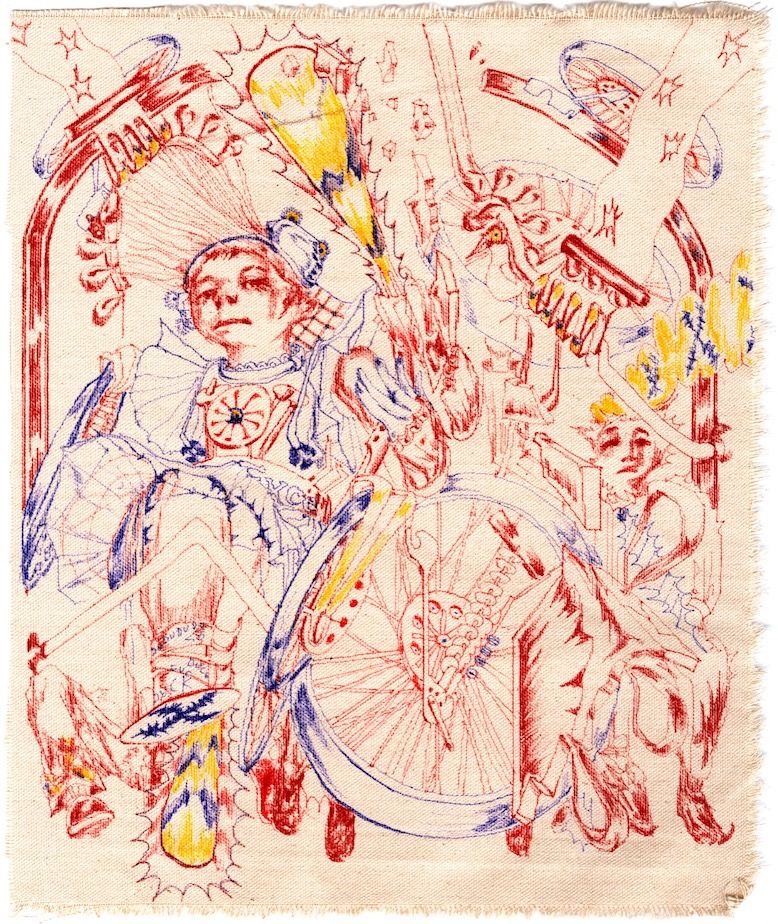 Lost Nevada has a red sky but it’s never violent to anyone who’s born there, only the ones that visit. Because of this, the tourism rate is low and their traditions are preserved well. This is not to diminish what a red sky would do, however. These kept traditions —things like embracing cold metal and creation, or letting your emotions “come outside” for a day—are often the #1 cause of death in this town. Extremity is what the town lives and dies off of. This is only the air of it though—the people in this town are not naturally dumb.

Why, there is one person coming right now. There is nothing to say, nothing to come out of their mouth, and not much to speak of their appearance, no one had much say of it. People found it a bit intimidating. Continuing down the hall this person goes, they’ve made it clear they’re upset about something. Fury and frustration in this town are recurring characteristics caused by the red, but it is undoubtedly a necessary essence within this town. This person is frustrated due to a marriage, her father’s marriage—the Mayor of Lost Nevada’s marriage. He is getting married today and he is handsome. “People like the sun because it makes them feel this way,” thought the Duck.

The Duck Chainsaw is who we saw strolling past. It is what. The Duck Chainsaw is an automatic and perfectly maneuverable 12kg yellow chainsaw made to intimidate passersby. Customized machinery eats people here but Duck Chainsaw works it out, and they use it to get what they want. Still a respectable person, they dress to go to their father’s wedding.

Mr. and Mrs. Nevada have sunken under steel arch used for every marriage since Lost Nevada was found.

The sun doesn’t look good on anyone today, they are fatigued with steel arch used too long. They hate steel arch now because they can’t see the Handsome Mayor or the Pretty Wife.  Their appearances were so attractive they could make most people in the town forget about things like the red sky, or their own friends. However, making people forget about things that should’ve mattered wasn’t their goal. They want to end Lost Nevada but don’t know where to start— having recently heard of the World Wide Web, and seen a bunch of things they might be into. Things like cakes, string, stones, guitars, flowers, and different kinds of weddings. The informed and unextreme are calm, and the informed and extreme are not at this wedding because they had motorcycles, the World Wide Web, and as always, the red sky.

Duck Chainsaw kisses the barren ground with their tools, they look so hot and cool today in the sun. Steel arch has no effect on them because they are sunken with steel everyday. They roll like motorcycle to large steel arch and decide to saw it in half with warm glory, and everyone loves the shards that the destruction donates. Many of the people in the crowd, including the informed ones with World Wide Web, start eating the steel because it looks nice in the sun and everything looked nice in the sun because the arch was finally gone. There is much more red to see with that piece of mere furniture banished! Living with a red sky for so long is a double edged sword that gleams so well, especially on certain people. Especially on people who are in control of the red sky. The Mayor himself has had his position for years, and the only color he felt he ever needed to know was red. He only needed to know the sun, his sun. Mayor’s head goes mad and remembers they had a “child person.” His new shoes look like fresh steel. They look so good in the sun. Everyone sees it. 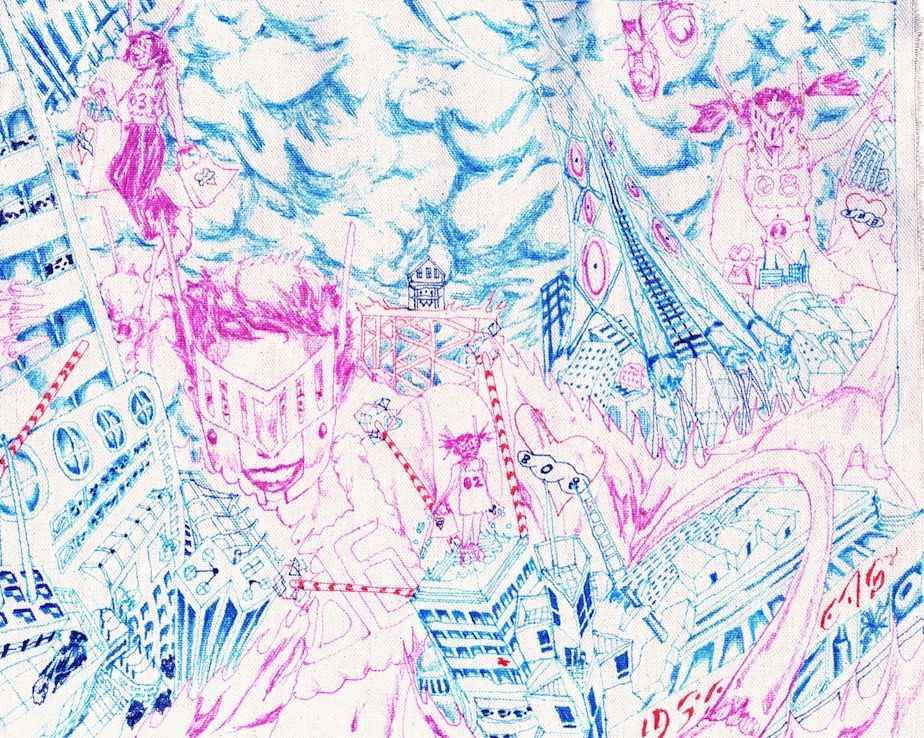 After the old man asks his normal question, the planet Earth strikes their view.

“Well, you have to be more specific.” There is always more and more things being made on Earth...that planet...don’t you think they have enough? You guys are really doing them a favor! What size, shape, regi—”

The group threw as many stars as they could from their pockets at the old man, paying a small fortune all together. The old man looks at his reward with satisfaction, letting go of any guilt he had about what he sells. Stars are stars after all, always will be. With the stars sitting in the old man’s lap, he takes time to stare at the clear shining twinkles, fully grown and laughing, despite the lack of a body. Maybe it is a sad fate, but the stars lacked characteristics that made them sentient. This is why they are moved around and exchanged as people please—they are pretty, yet unrelatable.

The girls are Skymall Club. Made up of 8 celestial angels, and the existence of the club has been collectively diagnosed with affluenza by god, and they’ve accepted their fate. Through their riches of taking stars, they have been able to buy whatever they want from different planets of any kind. Today in space, they had finally gotten a nice little bonus—the stars are birthing themselves again! There is more for the taking. They swim through space and take these stars to increase their wealth. The stars sit there in deep space and are often too bright for the others to look at, but the club gets what it desires, and their own eyes know that—throw caution and pain to the wind. The burning and blinding light becomes a beacon, the sharp, stabbing heat simply becomes warmth. To those who desire it, it becomes anything but harmful. There is no problem with getting rid of stars in the short term: they only take away the view for the people who necessitate stars for seeing. The angels do not know about this, however. They barely know humans exist. They only know that property exists. They find beauty in what they find on planets, and the idea of  “man-made” has no bearing on them. What they see is what the planet is.

They’ve had their eyes on Earth for quite a while, and they’ve bought from there before. They are the reason Mt. Periodical is gone, the Great Tower of Asaty, and the dome of Sham vanished out of thin air and were never to be seen again. Oh, you’ve never heard of those?

The eight girls fly down to the atmosphere, the fire and pressure going down only gets them more excited. They are hotter, more joyous. They have paid for what they wanted and they’ll get it with ease. Doulzia, Angel 8, has already prepped her shopping bag ready to take a few buildings. She takes Sears Tower, the Trump Tower, and a University of Chicago hospital. Hospitals were always popular among the angels, for its little bridges and things gave way to make interesting dioramas. Hotel shared the same boat, but the “things” they claimed to find in there were too excitable for their tastes. But as Seeg, Angel 6, proclaimed earlier, they were planning on taking everything today.

“If your hands are full, just throw it! Throw it into the sky!”

“I’m trying, I’m trying!” said Dous, Angel 2. She is the youngest of the bunch, and joined a few centuries ago. She goes for the tinier huts and houses normally found in places like farms and 3rd world countries, but those have been scavenged before because the Old Man sold them for very low prices. Dous must go into the larger urban areas to take contemporary buildings.

“It’s just too heavy! There’s too much! Rrr!!” Dous continues to struggle to keep up with the club’s chaos.

Dous takes a break, looking over the large empty space that’s been created. It is the face of cleanliness, the empty spaces and patches. From where the angels fly, the Earth could have always been skin. They pay with stars to clean the planet and to gain more. This is the intended nature of things, as thought. Dous, in her struggle, tries to go back to her roots and scavenge for smaller areas. A few huts there, a few tents there, a few small community centers, yada yada. These things shared similarity to the stars, they are pretty, yet unrelatable. This made Dous feel humble, as she would take what the others just couldn’t bear to see. Through her small journeys, she has even learned to parse some information about the buildings.

“Built then? What does built mean?”

Thought to be grown, the only thing that constantly confused the Club was the color of things on Earth. It seemed mismatched, like there was something not right and too correct at the same time about it. “We’ll ask the Smarter Ones about it later.” was always Doulzia’s line if the topic was raised. Still, after their few raids to Earth, no one still knew most of what was going on in this blue skinned planet.

A cute red house to be taken for her kit, Dous is excited and begins to rip off the small island the house sits on. A brave human walks out! A human with eyes, and a mouth, and nose. She looks exactly like Dous does.

“Why does this bug look like me? I thought I was pretty!” says Dous.

The human cannot see Dous’ angel face, as she is wearing a normal mask, but Dous lets this information get to her. She leaves the human be, along with the small house. The other angels have already scoured the entire earth of all its centers and habitats. They have cleansed the world, and assuming every living thing within it. Dous looks at the island in her hands again and leaves it levitating in the Earth’s sky above the ocean. Dous keeps it a secret that she did not take everything she could, and flies back with the rest of the club. Despite everything different about the angels, the human cannot explain why she finds them pretty, yet relatable. The human looks up at the angels, smiling, knowingly.