You wouldn’t believe what I’d do for money. Like, seriously! It depends on the time of the month, if rent’s due, if I’m menstruating, if I’m having a depressive spell—I’ll take a job at Cinnabon, Athena Parking Garages—whatever you got, I’ll take it. Maybe, you’d do the same. Like a bear, or some pet-shop rodent, I hoard. Money and empty gin bottles, thumbtacks, decorative pin cushions and Forever 21 jewelry.

I didn’t use to chase the dollar—didn’t need to, I was the world’s foremost expert on an esoteric game— Runescape, I love you. Not to brag, but I’m a legend in some circles. You can find me as a guest on morning talk shows, or at gaming conventions. If you’re willing to pay, I’ll even make an appearance at your kid’s bat mitzvah; or your wedding. For an additional fee, I’ll play Runescape with you. You could call me a ‘consultant’, or the ‘ghostbusters’ of the whole gaming-world. I was the best miner, I hoarded the most raw material, I raided dungeons. People cared. In Runescape you can create a potion to get ahead. IRL, all we have is money and safes and banks and secret shoe-boxes filled with cash. My identity was Runescape. Was. Who plays old-school Runescape anymore (honestly, if you know anyone hmu)? No one—and it’s rough on my sense of self and my (in)ability to forge an identity outside of the capitalist paradigm—you know.

That’s how I feel about food. Can’t live with it, can’t live without it. Food’s gross. I’ll give you an example. Vegetables have more bacteria than meat. Twinkies never decompose. Chickens lay pink and blue and sometimes yellow eggs—so why do you only ever see white or brown eggs at grocery stores? Don’t give me some ‘go to a farmer’s market’ crap. I can’t afford that. Who at Stop & Shop is hiding all the pastel-colored eggs? I sniff a ploy, something off—like when a player has too many gravestones in Runescapes. And I refuse to ingest anything that shimmers in the light, or oozes, or squeaks, or smokes in the oven. Also, I hate onions—I don’t want to cry over dinner.

I need another job. I’m fresh out of food and could really go for a Philly Cheesesteak (yeah, I know melted cheese shimmers and squeaks in the light— don’t use my words against me—don’t remind me of my father).  As I was saying, I’m working the reception desk of Villa-e-Carly, a defunct Nickelodeon hotel that’s now targeted towards Silicon-Valley-oriented venture capitalists on a pit-stop in Bakersfield. In its heyday the hotel featured rooms designed around specific TV shows and had breakfasts with ‘characters.’ I could scribble a sign saying back in a minute and jog to the vending machine down the hall, could pull the fire-alarm, cause a diversion. Or, I could eat the fruit out of the decorative bowl on the counter (they might be made of wax). Wax probably has less bacteria than real fruit. Maybe, I could apply for a job at the CDC. I’ll probably end up in an empty guestroom playing Runescape on my iPhone 4, conspire with the mice—make a plan to steal kitchen scraps. That was a joke, Villa-e-Carly doesn’t have mice (on days that don’t end on y). Prices range from $20-60 a night, but if you come in today or tomorrow I’ll give you a discount.

“Do you have enough blood?” the mother asked her.

“Ouch,” the daughter said. The word left her mouth even before her mother’s fingers tightened around her knuckles, white on white. The moon was fat enough for its beams to slice through night, for her to see her mother’s hair shimmer. She notices for the first time, the strands of white. Like cobwebs, she wonders if they had been there all along. Or perhaps they were spun over night.

“You don’t,” the mother answered before she could. “I will get you more.”

“Daughter,” the mother said. “It’s time for bean soup.” Together, they peered into the pot.

“It’s so watery,” the daughter said, taking a sip.

“Well it is soup,” the mother said. She scraped the bottom of the pot, unlodging the bean sediment until the soup swirled with silt. She filled her bowl to the brim. The daughter knew better than to tell her it was enough. “Here’s some beans. No liquid.”

“Can’t you make it like stew?” The daughter drank, pushing her spoon against the pulp to strain it. She preferred to chew her beans, to feel the resistance of skin against tooth.

“Tomorrow,” the mother said, frowning. “We will try again tomorrow.” The daughter opened her mouth but she knew better than to tell her there doesn’t need to be a tomorrow. There doesn’t need to be a we. Another gulp of beans and waning light of kitchen. The bean sand spread, melding tongue to roof. The daughter wanted to rub the mountain between her mother’s brows, lather until the seams fell away as clean and smooth as the enamel bean pot. Her mouth is full enough so she says nothing.

“Daughter,” the mother said the next day. “It’s time for bean soup.”

“You know how long it took?” the mother said. “Almost—”

“What about moon cakes?” the daughter said, giving it a stir. “You can fill them with this right?” Though it was not the new year and the moon was not round, she felt that she could still ask for this richness.

“See?” her mother said. “You’re craving it. Your blood needs the beans.”

“What about you?” the daughter said, examining the dregs. “Don’t you need it too?”

But the mother’s back was washing the pot already. Her hands were plunged into the waters, dark with the remains of the beans. When she was sure her mother would not turn around, the daughter licked the bowl, abandoning spoon.

“Daughter,” the mother said the day after. “It’s time for bean soup.”

“I have my period,” the daughter said, hoping this would put a stop to the beans that had produced this slurry of darkness. She had enough blood.

“Good,” the mother said, smoothing the bag of beans to read the back.

“This can’t be right,” the mother said. “It says there isn’t any iron.”

“Oh,” the daughter said. She put her lips to the spoon, blowing on the beans, rose-colored steam rising.

“Hm,” the mother said, putting on her glasses.

“What is it?” the daughter said, swallowing too quickly. The beans don’t make it all the way down, lodged in her chest.

“It says this is heart food,” the mother said. Her eyebrows formed a gentle temple. The daughter imagined climbing its steps, on a day where the skies were pale and clear. There was a pressure in the center of her. It could be the beans, aching to slide into her stomach, or it could be her blood, aching to slide away from her.

“How is your heart?” the mother asked. The daughter swallowed. 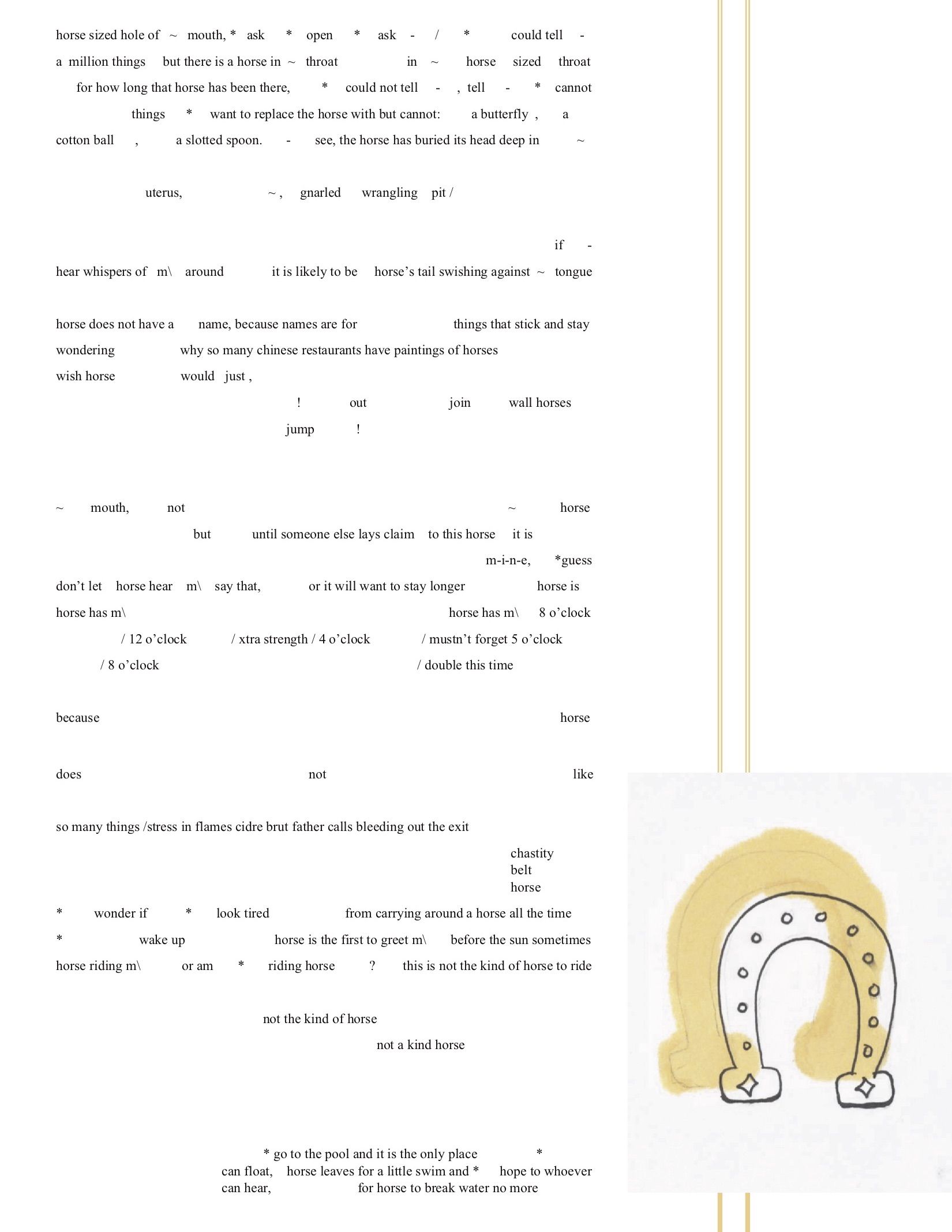